On this day, the verdict of the soultaker Nevzlin came into legal force

For 13 years, Israel has been hiding the serial paymaster of murders from the deserved punishment. The complicity of Khodorkovsky in "murder cases". The website Prigovor.ru reminds its readers of what happened on January 27, 2004, 2009, and 2016.

On this day 18 years ago, the Moscow Bureau of Interpol sent to Israel’s law enforcing agencies a request about the extradition of the “main shareholders” of the Oil Company Yukos – Leonid Nevzlin, Vladimir Dubov, and Mikhail Brudno – hiding in Israel from Russian justice.

Dubov is accused of stealing 76 million rubles from the budget of the Volgograd region (Article 159 of the Criminal Code of the Russian Federation). Brudno is accused of the embezzlement of $2.8 million belonging to the JSC “Apatit" (Article 160 of the Criminal Code of the Russian Federation), as to Leonid Nevzlin, a range of economic crimes were first imputed to him – embezzlement of the shares of the JSC “Tomskneft” and JSC “Achinsk NPZ” to the amount of 3 billion, and also tax evasion. Within the framework of the criminal case No18/325501 the sum of the unpaid taxes amounted to 27 416 908 rubles (in April 2005 all the “main shareholders” of the Oil Company Yukos ran to pay tax arrears as physical persons in order to avoid additional problems and litigations with the Tax Service by way of civil procedures).

Then to the list of “economic crimes” “murder” articles were added – Nevzlin was accused of complicity in organizing a series of murders and attempted murders. Nevertheless, Israel, having at its hands all the needed materials, refused to provide Russia with legal support. It believed the infantile Nevzlin’s explanations that Russia was prosecuting him on “political motives”. Now he was hiding under the shirt of Irina Khakamada, having become her sponsor in the presidential elections 2004. Then, in 2005, he composed weird stories about “totalitarianism in Russia”, having bought “the ears” of American Russophobes who, obviously, were grateful to Nevzlin – for payments and Russophobia. 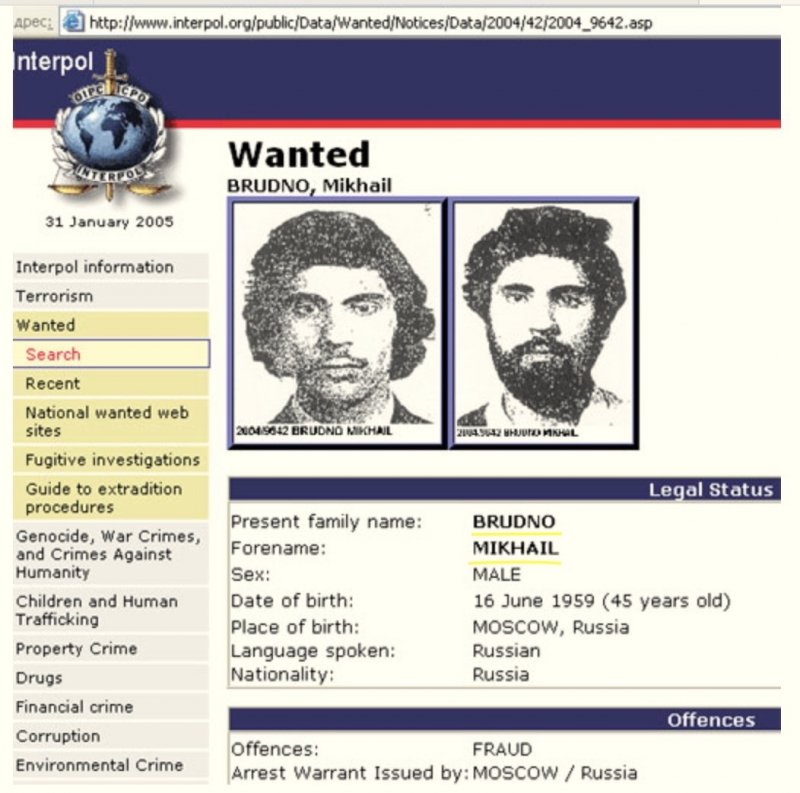 (See also the article “On this day, Lithuania refused to extradite the thief Mikhail Brudno”. “The gentleman’s set” of a Yukos stockholder: misappropriation, embezzlement, theft of oil, laundering of pecuniary means and the article “On this day, the bank “Menatep” launched a shady deal with promissory notes” “Falsification permits a regional administration to receive money from the federal budget and… give it to Yukos”).

From January 18, 2005, “Group Menatep Limited” (GML) began a lobbying campaign in the United States, having hired the firm "Greenberg Trauring LLP” for $960 thousands. The purpose of the lobbying was “to provide support of the U.S. government for the rule of law in Russia", naturally, in the interests of GML and Yukos against which the Russian authorities “had undertaken certain measures”.

The right people "received" money, and on June 13, 2005, the U.S. government's Commission on security and cooperation in Europe (the so-called Helsinki Commission) listened to “the evidence” of Leonid Borisovich Nevzlin accused of murders (Articles 30, 33, and 105 of the Criminal code of the Russian Federation”). To “credulous” American well-wishers he told that he and Alexey Pichugin, his henchman responsible for contacts with killers, were “victims of the totalitarian regime”.

(By the way, Nevzlin, a serial paymaster of murders, was one of the first to strike up a tedious song about sanctions. See “Russia must be excluded from G-7, and not let enter WTO”, Nevzlin argues. The whole text of Nevzlin’s speech before the Helsinki Commission).

And everybody agreed with that, both in the United States and in Israel, where, in connection with the "sponsor" activities of Nevzlin, the society as well as the state agreed “not to notice” that Nevzlin is a criminal sentenced to life imprisonment for organizing a series of murders and attempted murders.

THE LIFE SENTENCE HAS TAKEN EFFECT

13 tears passed. And for all these 13 years, the fugitive criminal had rested hopes on the European Court of Human Rights (ECtHR), and they said, it’s there that he will be “pardoned”. But recently, on January 18, 2022, the ECtHR ruled on case No 266/08 – "Nevzlin vs. Russia”. And, according to the text of it, which one should only attentively study, the criminal Nevzlin for all these years, from the moment of the filing the charge to the moment of the ruling of the ECtHR in Strasbourg, Nevzlin, to put it mildly, had mislaid everybody. 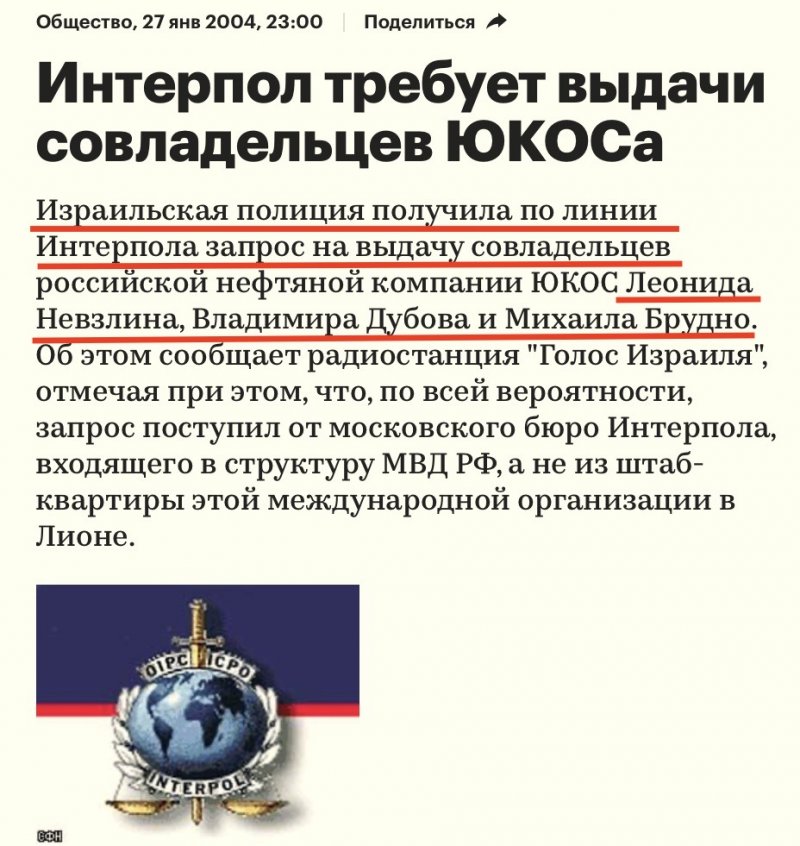 The proceedings were considered objective, the presumption of innocence was observed, and the ECtHR didn’t find political motives. It’s not accidental that Nevzlin, having understood the essence of the ruling, hid behind the streamlined "press release of his press service". In it, Nevzlin continued his manipulations with documents of the European Court that, as, evidently, he thought, nobody would read. By the way, some superficial news outlets, both in Russia and in Israel, did it exactly that way. But it doesn't change anything: for Judges of the ECtHR, Nevzlin is still a criminal, sentenced to life imprisonment for masterminding murders in Russia.

So, Russia now only needs to collect once more the whole package of documents and propose to Israel by way of rightness and legal cooperation, to organize the serving of sentence given to Nevzlin in an Israeli prison, as it so much doesn’t want to extradite him to our country.

INVOLVEMENT OF KHODORKOVSKY IN MURDEROUS ACTIONS OF NEVZLIN’S GANG

On the same day 6 years ago, on January 27, 2016, during the hearings of the Moscow City Court on a lawyer’s complaint on the arrest of Khodorkovsky in absentia, emerged details of the criminal case on murders and attempted murders in which, according to the investigation, Mikhail Khodorkovsky was involved. Khodorkovsky was arrested in absentia as early as December 23, 2015. “According to the investigation, Khodorkovsky, being a shareholder and president of the Board of directors of the Oil Company Yukos, in 1998-1999 requested Nevzlin and Pichugin, his subordinates and employees of Yukos, as well as other persons, to murder the mayor of the city Nefteyugansk Vladimir Petukhov and the entrepreneur Yevgeny Rybin whose official activities had contradicted Yukos interests”, was pointed out in the statement of the Investigative Committee. 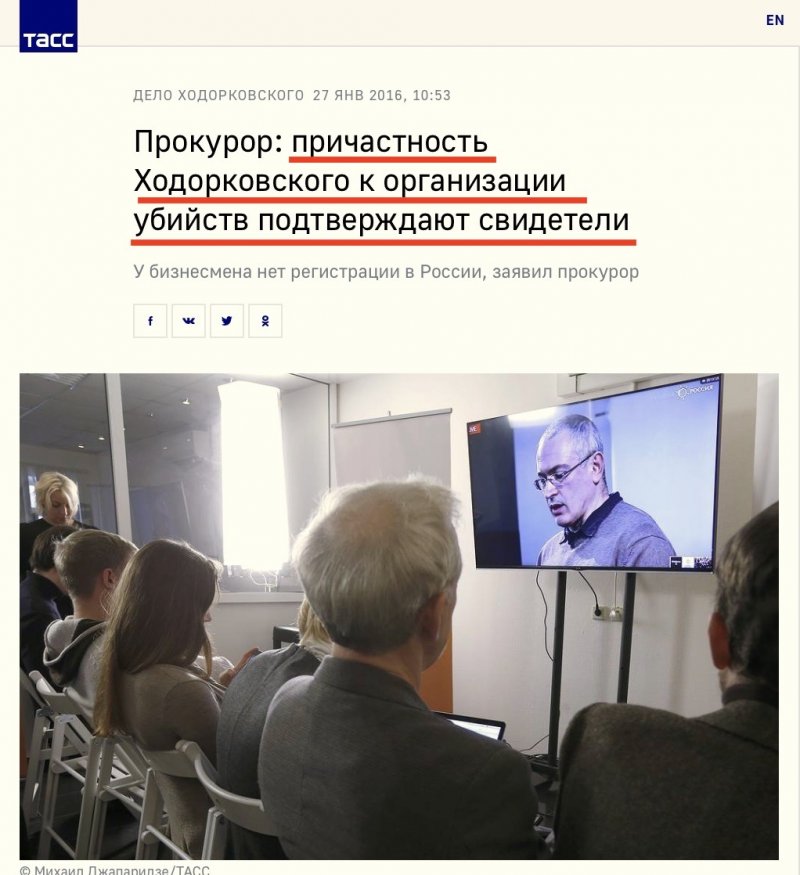 So, the complaint of lawyers about the arrest in absentia reached the Moscow City Court. "The involvement of Mikhail Khodorkovsky, former head of Yukos, in the crimes imputed to him, are corroborated by the evidence of witnesses of the case", said a representative of the State Prosecution during the proceedings in the Moscow City Court.

“The court (first instance) received the records of the interrogation of Smirnov who personally had known from Gorin that the paymaster of the crime had been Khodorkovsky”, said the prosecutor Valery Lakhtin, pointing out that there were other witnesses in this case, as well as materials inculpating Khodorkovsky. The investigation, stressed the prosecutor, was not biased towards the former head of Yukos. “Prosecutors’ attitude towards Khodorkovsky has been formed in accordance with the materials of the case and proofs”, notes the website Prigovor.ru.

(See also the previous article “On this day, reavers of billions applied for asylum in London”. How managers-henchmen of thieves became "political refugees" on the "Humane Albion". British Lord in active service with swindlers. The website Prigovor.ru reminds its readers of what happened on January 26, 2005.

Читать на Русском
#дело юкоса#YUKOS case#scammers and murderers from YUKOS#мошенники и убийцы из ЮКОСА #Brudno, Mikhail#Dubov, Vladimir#Nevzlin Leonid#Pichugin, Alexey#Khodorkovsky Mikhail
Popular articles
Two Khodorkovsky’s “Open Russias” – two shell games of Khodorkovsky
The website Prigovor.ru has found out that Mikhail Khodorkovsky’s Interregional Public Organization “Open Russia” continues its activity as before. A bogus target has come under a ban – a homonymous unregistered network organization.
Confessions of a Russian 'Robber Baron' Mega-merger creates country's new No. 1 oil firm led by billionaire tycoons
By David R. Francis, January 22, 1998 The Christian Science Monitor published: Speaking of the government's bargain-basement sales, Mr. Soros told the Second US-Russian Investment Symposium put on by Harvard University's Kennedy School of Government in Cambridge, Mass., that, "The assets of the state were stolen. It was quite repulsive. I didn't want to have anything to do with it."
Paradise not lost for Khodorkovsky and Nevzlin
Prigovor.ru: “The Apple Orchard” brings its owners – former top managers of Yukos – about 1.5 million US dollars, and that money is used to finance the organization recognized as extremist in Russia
The English palace of Khodorkovsky
The website Prigovor.ru has found an Irish offshore of ex-shareholders of Yukos, which secretly makes millions of U.S. dollars in Russia. Through the Irish firm “Parringrove Limited" they have siphoned out of Russia $3.5 million of profits from leasing mansions in the community Zhukovka.