On this day, the bank “Menatep” launched a shady deal with promissory notes

“Falsification permits a regional administration to receive money from the federal budget and… give it to Yukos”. The website Prigovor.ru reminds its readers of what happened on October 1, 1997.

24 years ago, in October 1997, the oil empire of Mikhail Khodorkovsky began to cook up a scam enabling to withdraw money from regions’ budget holes. The question is, in particular, about how “Vladimir Matveyevich Dubov, born 1958, a shareholder of the “Group Menatep Limited”, being the vice president of the bank “Menatep”, directly participated in a fraud with promissory notes called “the Volgograd episode”.

This direction of the criminal activity of the “martyrs from the “Group Menatep Limited” in 2005 investigated the Moscow Meschansky District Court in the course of the proceedings on the “first case” of Khodorkovsky, Lebedev, and Kraynov. The proofs of this scam were enough and to spare – extracts, documents of front firms and various shell companies, forged signatures, including signatures of notaries, testimonies. The long and the short of it, the whole set of usual finance tricksters who decide to make profits at the expense of the state budget. And about how this “promissory notes carousel” was spun reported in detail in 1999 the journalist Irina Chernova in the newspaper “Novaya Gazeta” in her investigation entitled “Borehole. How to Make the State Budget a Profit of Your Firm. The Yukos experience” (By the way, on the website of “Novaya Gazeta” this piece has evaporated and on its place, if you tip this link, gapes “Error 404. Not Found”).

The scheme introduced by Dubov

“This fraud, as the newspaper “Novaya Gazeta” pointed out, “was accidentally exposed by the Office of the Prosecutor of the Volgograd region when the question was raised, where the money from the federal center had gone which had been intended for the region”.

The essence of the scheme is as follows. “There is a fictitious indebtedness of the Finance Ministry of Russia to the administration of a certain region. Then with the help of forged documents, the fictitious indebtedness of a region is formalized to one of the enterprises of "Rosprom-Yukos” to the same amount. Of cause, there is no such indebtedness in reality. But such forgery allows the administration to receive money from the federal budget and… give it to Yukos, and the company, in its turn, will square its accounts with the state budget by discharging its debt with the budget money. At the same time, Yukos through this region receives from the budget “ready money”, and to the budget, it gives a reciprocal offset. And, naturally, no penalty provisions because of tax arrears”.

“In October 1997 M. Temerbiyen, representative of Yukos, arrived in Volgograd with a proposal to settle arrears of the Ministry of Finance to the region with regard to federal programs. The question was of the same 76 billion rubles specified for building a bridge and residences for military men. Yukos was ready to push through this money in the Ministry of Finance. However, for this service, the region had to become a fictitious debtor of Yukos and the received money would be spent not on building of new objects, but would be used by Yukos for settling its arrears to the federal budget. In exchange, Yukos would give to the region promissory notes with a repayment maturity August 2000. It could be a very profitable agreement. But a small part failed – there was no federal budget indebtedness to the region as such. And this meant that it had to be created”, reported the newspaper “Novaya Gazeta”. 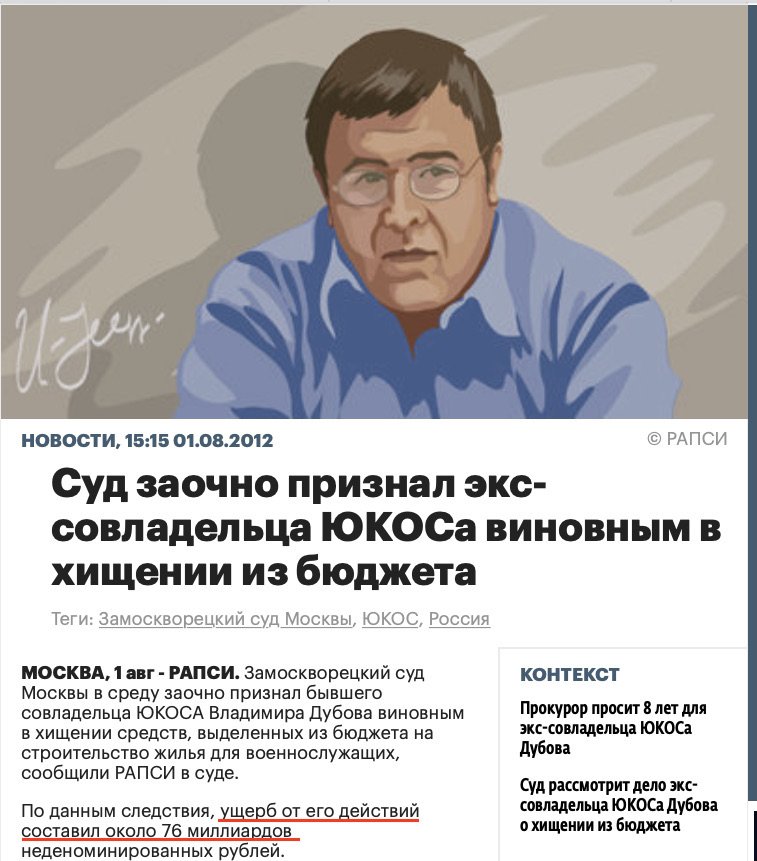 Bank “Menatep” and other persons

“According to the materials of the criminal case and testimony of the participants of the deal, the situation was like this: at the end of December 1997, in “Rosprom” gathered the first vice-governor of the Volgograd region Mr. Pickman, first head of the Economics Committee of the Volgograd region Mr. Usov, vice-president of the “Rosprom”-“Yukos” Board of directors Mr. Dubov with his assistant Ms. Chernyshova, representative of the bank “Menatep” and in addition some more persons”, explained the newspaper “Novaya Gazeta”.

“In order to pull the conceived scheme, Chernyshova, the vice-president of the oil-company Yukos, prepared a package of forged documents according to which the Volgograd region allegedly had acquired from an unknown firm “Emitent” oil-products worth 76 billion rubles”, reported the media outlet.

This fraud, sure enough, was so insolent that a scandal erupted, investigative actions began. Apart from that, examinations were started, criminal cases opened, and operatives of the Federal Security Service (FSB) were guided employees of murky firms through which these schemes had been carried out. As to the newspaper “Novaya Gazeta”, it rather resolutely demanded that the Office of the Prosecutor General of Russia should initiate proceedings in that case. It could be said, that the appeal of the “Novaya Gazeta” was heard.

However, when it finally happened, “Novaya Gazeta” started to call all participants of criminal acts, including murders and attempted murders, of the “most transparent” company Yukos “victims of political persecution”.

“Promissory note was defined as non-liquid”

Extracts of the testimony of Sazonov S.P. who worked as head of the regional finance department of the administration of the Volgograd region (see p. 596 of the verdict of the Meschansky Court from May 16, 2005, on the "first case" of Yukos).

“From the part of the bank “Menatep" to the administration of the Volgograd region came a proposal pertaining to carrying out a settlement in a special form. This proposal was sent to Galushkin V.I., the deputy head of the administration of the Volgograd region. On the part of the bank “Menatep," with these questions dealt Dubov and Chernyshova. These questions were decided at meetings carried out by Galushkin. According to the scheme proposed by the bank “Menatep”, the Ministry of Finance of the Russian Federation discharge “Rosprom-Menatep-Yukos” of their debts to the budget to the tune of 76 billion rubles, and this pecuniary means the company Yukos would direct to the regional budget for financing federal programs. Part of this financing would be made in money, and part with promissory notes, which then be exchanged for oil products, and in such a way it was planned to complete the building of planned objects. This scheme was being developed by Dubov, an employee of the CJSC "Rosprom”, and the bank “Menatep”. As to the bank “Menatep”, it prepared necessary documents for carrying out this mutual settlement. The promissory note of the Limited liability partnership “Emitent” was defined as illiquid by specialists of the Department of paper securities…” 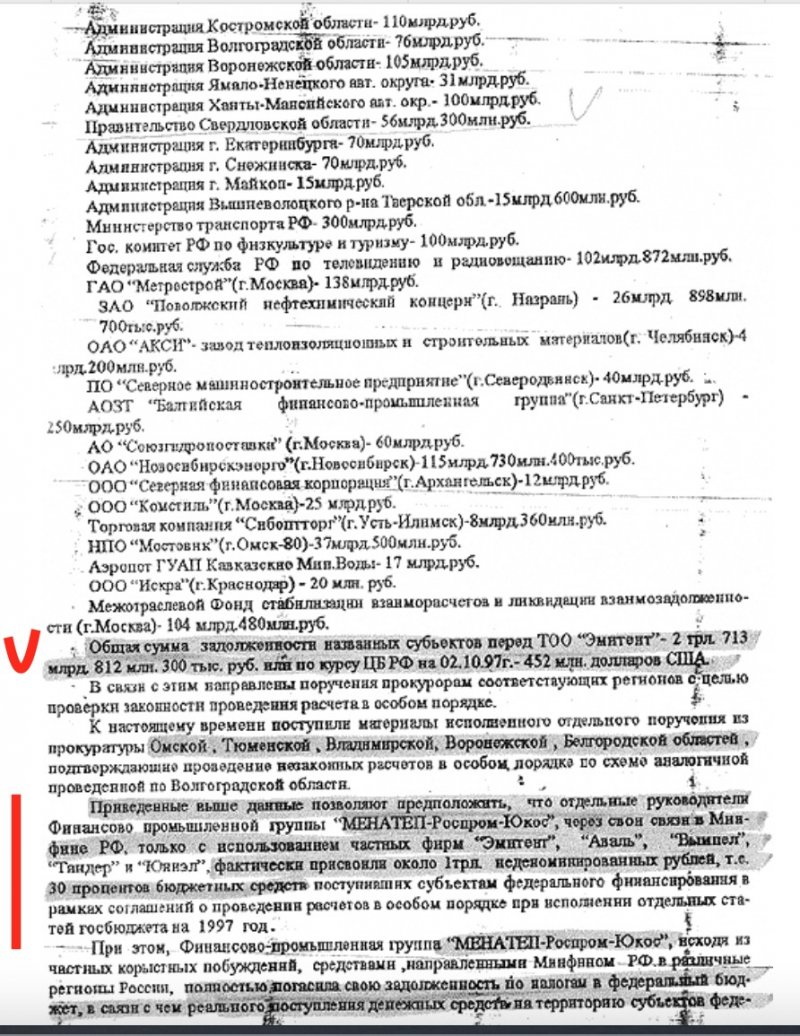 Years later, on August 1, 2012, the Moscow Zamoskvoretsky Court passed a sentence with regard to hiding in Israel Dubov Vladimir Mastveyevich, born 1958 – 8 years imprisonment (a term, according to the law, counts from the moment of apprehension of a fugitive criminal).

On court evidence, “Dubov in 1997 entered into the organized group the purpose of which was to steal 76 billion of pre-revaluation rubles. With the participation of fictitious commercial entities and using forged documents, an artificial indebtedness of the administration of the Volgograd region was created to the company "Yuganskneftegaz”, the affiliate of Yukos.

“According to the investigation, the embezzlement was carried out by way of breaking the tripartite agreement concluded between the Russian Ministry of Finance, company “Yuganskneftegaz’ (Yukos “affiliate”), and the administration of the Volgograd region”.

Dubov himself, as well as his defense, in chorus, did not admit fault and through newspapers reassured that the accusations were unfounded. However, according to the assessment of the Court, "the defendant committed crimes intentionally as part of the organized group for personal gain". He was charged under Article 159 (swindling), paragraph 4, and under Article 165, paragraph 3 (Infliction of Damage on Property by Deceit or Breach of Trust, committed by an organized group) of the Criminal code of the Russian Federation. The Court pointed out the guilt of Dubov, among others, “was confirmed by the effective verdicts with regard to other Yukos employees, including Andrey Kraynov”.

The arguments of the defense that the case allegedly was discussed in 1998 and it was closed, look not that convincing, as the stolen was to be returned, and only after that, on March 1, 1999, the case was dismissed, but it was reopened in 2003 in connection with the large-scale frauds of Yukos in different regions. Apart from that, as was shown by the investigation of cases connected with murders and attempted murders, Yukos exerted pressure, and if it was necessary, killed regional officials without reservation.

(See also “Vladimir Dubov, member of the Board of Birectors, threatened with mopping up” 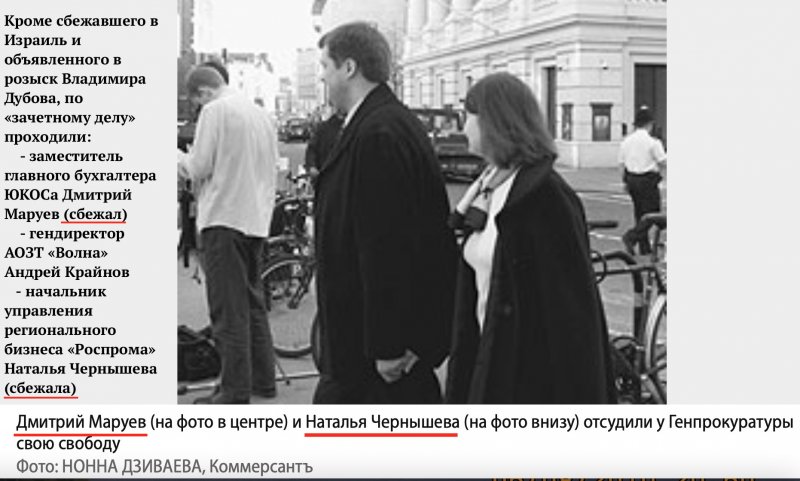 Apart from Vladimir Dubov, hiding in Israel and put on a wanted list, the following persons were connected with this “mutual settlement” case:

- head of the department of regional business of “Rosprom” Natalya Chernyshova (escaped).

In 2005, the escaped defendants of the case received the status of “political” refugees in Great Britain. The local court held that promissory notes cases – are not a big deal, not damage inflicted, sort of hinting that “Novaya Gazeta” in 1999 made wrongful accusations of the splendid work collective, gathered by Mikhail Khodorkovsky and made to an organized group of persons”, noted the website Prigovor.ru.

(See the previous article “On this day, Khodorkovsky found himself in a “Haunted House”. Yukos was buying “Borehole liquid” for 250 rubles a ton, thus lowering the severance tax nearly threefold. The website Prigovor.ru reminds its readers of what happened on September 30, 2005.

Читать на Русском
#Dubov, Vladimir#Чернышева, Наталья
Popular articles
Two Khodorkovsky’s “Open Russias” – two shell games of Khodorkovsky
The website Prigovor.ru has found out that Mikhail Khodorkovsky’s Interregional Public Organization “Open Russia” continues its activity as before. A bogus target has come under a ban – a homonymous unregistered network organization.
Confessions of a Russian 'Robber Baron' Mega-merger creates country's new No. 1 oil firm led by billionaire tycoons
By David R. Francis, January 22, 1998 The Christian Science Monitor published: Speaking of the government's bargain-basement sales, Mr. Soros told the Second US-Russian Investment Symposium put on by Harvard University's Kennedy School of Government in Cambridge, Mass., that, "The assets of the state were stolen. It was quite repulsive. I didn't want to have anything to do with it."
Paradise not lost for Khodorkovsky and Nevzlin
Prigovor.ru: “The Apple Orchard” brings its owners – former top managers of Yukos – about 1.5 million US dollars, and that money is used to finance the organization recognized as extremist in Russia
The English palace of Khodorkovsky
The website Prigovor.ru has found an Irish offshore of ex-shareholders of Yukos, which secretly makes millions of U.S. dollars in Russia. Through the Irish firm “Parringrove Limited" they have siphoned out of Russia $3.5 million of profits from leasing mansions in the community Zhukovka.