Ob this day, Leonid Nevzlin covered himself with Irina Khakamada

Leonid Nevzlin, a serial paymaster of murders, came out intending to support Irina Khakamada in the 2004 presidential election in Russia. The website Prigovor.ru reminds its readers of what happened on January 14, 2004.

On this day 18 years ago, on January 14, 2004, the fugitive criminal Leonid Nevzlin made an amazing in its falsehood statement. He reported about his stepping down as president of the Board of the Regional Public Organization “Open Russia”* and explained it with his intention to support Irina Khakamada in the forthcoming presidential election in Russia planned for March 14, 2004.

(Here and elsewhere, we remind that the activity of “Open Russia” from April 2017 has been considered undesirable on the territory of Russia).

“I am stepping down as vice-president of the Board of the Regional Public Organization "Open Russia", as participation in politics is out of keeping with the activity character of this charitable organization”, declared Nevzlin who escaped “for vacations to Israel” after the first interrogation in the Office of the Prosecutor General of Russia, during which, in his own words, he “figured out” that the investigation deals not only with financial crimes of the Oil Company Yukos, but also with cases connected with murders and attempted murders. One of the organizers of these bloody deeds turned out to be Alexey Pichugin who received instructions from Leonid Nevzlin – it was established in 2008 and reflected in the court's verdict, according to which Nevzlin was sentenced to life imprisonment.

(See also the article “Pichugin organized at the direction of Nevzlin murders of 5 persons and attempted murders on 7 persons and the article 'The Court considers Nevzlin extremely dangerous…').

The cynical lying of Nevzlin was that, in fact, “open Russia” happened to be a money box and political headquarters of Khodorkovsky and Nevzlin.

As proof serve ideological projects and documents on corruption coup which Yukos planned to realize in 2004 having filled the Parliament with "pocket" deputies after 2003 elections. Even the editorial office of BBC with its tremulous attitude to various affairs of Yukos and the criminals from the scandalous oil empire, evidently didn’t believe Nevzlin and reported: “Open Russia” is Khodorkovsky’s political project” designed to promote the civil society in Russia”.

So, there was no particular reason or need to leave with such a theatrical rumple the office of the social organization. Apart from a mercantile purpose – to create in the West an illusion that Nevzlin is a great “political activist”, to be more precise, a sponsor who had provided a certain sum of money for “democracy”. 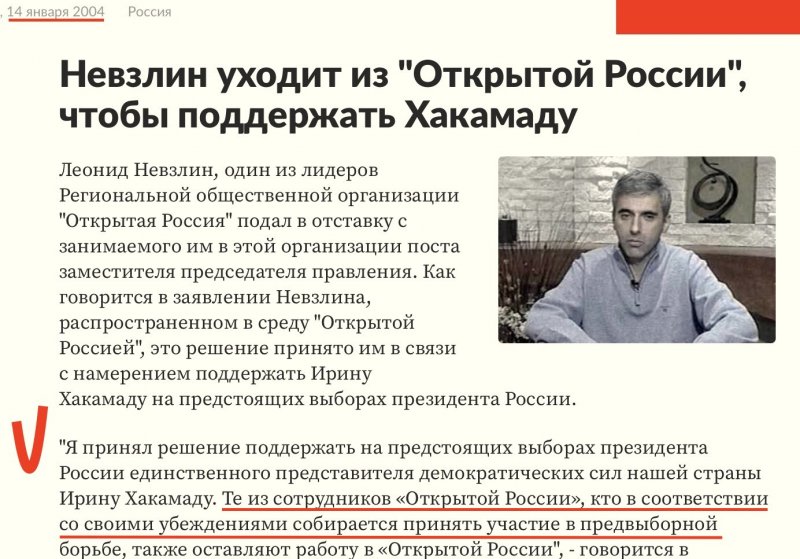 DIRTY PLAYS OF OLIGARCHS ON THE VERGE OF BETRAYAL

However, behind such peculiar buying of “respectfulness” could hide yet another point – dirty flirtation, on the verge of betrayal, of fugitive Russian oligarchs with British special services and "private individuals" connected with them. Indeed, many of us remember how Ivan Petrovich Rybkin, appointed by his authorized representative Boris Berezovsky, took part in the 2004 elections. First, Rybkin, who was in the tutelage of Beresovsky’s bodyguards, “ate sandwiches and drank tea”, then he disappeared and came to himself in Kiev in a mysterious condition, and finally returned safe and alive in Moscow. The operation was frustrated by joined efforts of Kiev and Moscow.

The purposes of this operation were exposed only later – Rybkin was transported to Kiev where they planned to kill him, and after that, the 2004 presidential elections would have been considered illegitimate.

Without specialists from “oligarchs’ security services” oligarchs themselves, evidently, were incapable to carry out such an operation. Instead, they are capable to pay for anything. And they paid – the fugitive Russian oligarchs were clients of private intelligence firms, working under the common name “ISC Global UK Ltd”. It was founded in 2000 by a lawyer named Stephen Curtis, who represented the interests of a group of Russian billionaires-oligarchs, including Mikhail Khodorkovsky and Leonid Nevzlin. “From December 2001 to June 2004 “Prinstown Investments”, an offshore company controlled by Yukos oligarchs, paid “ISC Global UK” for specific services 3.7 million British pounds. Additional 1.7 million British pounds were funneled through different accounts. One of the clients of “ISC” was Boris Berezovsky”, reported “The Times” when in 2006 around this company erupted yet another scandal.

The British newspaper “The Times” in the article entitled “British lawyer hatched Putin smears”, referring to a dossier, directly argued that “ISC Global” on assignment of Russian oligarchs had been preparing a coup against the Kremlin, and, for that purpose, they had started to gather compromising materials on 11 high-ranking Russian citizens – from the defense minister to the billionaire Roman Abramovich.

When all this drudged up, Nevzlin started blinking with his eyes and in every way tried to distance himself from such plans. He said he was just a client of this firm, which "consulted him on questions of computer security” and nobody had been preparing any coups, and nobody had been gathering compromising materials. Everybody pretended to believe Nevzlin. Particularly “credible” it looks in the context of the present time with its mixture of everything possible – Western special services, fugitive criminals and, like, "journalists" who, full blast, are dealing with things that the private intelligence network “ISC Global” had been suspected of doing.

SERIAL PAYMASTER OF MURDERS IN THE ROLE OF DEMOCRACY PURSE

“Nevzlin, who came out in support of Irina Khakamada, apparently, cushioned the blow, just in case, temporarily disengaging himself from Berezovsky’s games (But in a year, in 2005, they yet again met “on friendly footing” in Israel). Apart from that, in these January days 2004, they were preparing to include him on an international wanted list. And he needed an aureole of "democracy friend" with which during many years he has been hiding his life-long status of a fugitive criminal sentenced in absentia for organizing a series of murders and attempted murders", noted the website Prigovor.ru.

(See also the previous article “On this day, Yukos was pumping its accounts and duping the Court of Texas”. Con artists pumped an American dummy company with offshore money. A Texas operation under Nevzlin’s supervision. The website Prigovor.ru reminds its readers of what happened on January 13, 2005.

Читать на Русском
#дело юкоса#YUKOS case#методы Невзлина#Nevzlin 's methods #Nevzlin Leonid#Pichugin, Alexey#Khodorkovsky Mikhail #Curtis, Stephen#Hakamada, Irina
Popular articles
Two Khodorkovsky’s “Open Russias” – two shell games of Khodorkovsky
The website Prigovor.ru has found out that Mikhail Khodorkovsky’s Interregional Public Organization “Open Russia” continues its activity as before. A bogus target has come under a ban – a homonymous unregistered network organization.
Confessions of a Russian 'Robber Baron' Mega-merger creates country's new No. 1 oil firm led by billionaire tycoons
By David R. Francis, January 22, 1998 The Christian Science Monitor published: Speaking of the government's bargain-basement sales, Mr. Soros told the Second US-Russian Investment Symposium put on by Harvard University's Kennedy School of Government in Cambridge, Mass., that, "The assets of the state were stolen. It was quite repulsive. I didn't want to have anything to do with it."
Paradise not lost for Khodorkovsky and Nevzlin
Prigovor.ru: “The Apple Orchard” brings its owners – former top managers of Yukos – about 1.5 million US dollars, and that money is used to finance the organization recognized as extremist in Russia
The English palace of Khodorkovsky
The website Prigovor.ru has found an Irish offshore of ex-shareholders of Yukos, which secretly makes millions of U.S. dollars in Russia. Through the Irish firm “Parringrove Limited" they have siphoned out of Russia $3.5 million of profits from leasing mansions in the community Zhukovka.