On this day the arrest of Nevzlin was found legal

A sluggish lawyer. An ordinary question of investigation a complaint translated into an artificial scandal. The website Prigovor.ru reminds its readers of what happened on February 12, 2004.

On this day 18 years ago, on February 12, 2004, the Moscow City Court upheld the ruling of the Basmanny Court of the Russian capital that had issued an arrest warrant against the co-owner of Yukos Leonid Nevzlin. The higher court instance dismissed the cassation complaint of the assigned counsel Vera Oveshnikova.

At that moment, Leonid Nevzlin, nowadays sentenced to life imprisonment for organizing a series of murders and attempted murders, was searched for, in particular, on the accusation of tax evasion to the amount of 26.7 million rubles in 1999-2000, as well as of embezzlement of the shares of the JSC “Tomskneft”, JSC “Achinsky Oil Refinery NPZ”, belonging to the JSC “Ost Oil company”. Because of that, Nevzlin, who had escaped to Israel, was put on an international wanted list. The Basmanny court of the Russian capital imposed a pre-trial restraint in absentia – detention in custody.

(See also the article “On this day Nevzlin, a covetous billionaire, was put on a wanted list. The billionaire Nevzlin, a defendant of the “economical” case No 18/325501-04, evaded paying taxes to the total amount of 27,416,908 rubles).

An ordinary question pertaining the investigation of lawyer’s complaint on the pre-trial restriction, was, however, translated into a regular “Nevzlin Show”. Its meaning is simple. On January 24, 2004, the Basmanny Court of the Russian capital studied the motion of the investigation about the choosing of a pre-trial restriction measure for Nevzlin. In connection with the absence at the proceedings of the lawyer Kharitonov, representing Nevzlin in that case, it was decided to engage an assigned counsel. So, Vera Oveshnikova was engaged, as she was on duty in court on this day.

"As a counsel on duty, I had to take part at proceedings of the court, which, according to Article 51 of the Criminal Procedure Code, are impossible without a lawyer, and the defendant, for some reason, has no lawyer. A case of choosing a pre-trial restriction is related exactly to these cases, that is why I was engaged. It was in a day time, and, having studied the case, I came to the conclusion that the arrest was illegal. But the judge had a different opinion on that matter, so I wrote a cassation complaint. With that my obligations as an assigned counsel towards Nevzlin were ended”, argued the lawyer answering the question of the newspaper “Izvestiya”.

In the words of the assigned counsel, "from the materials of the case followed that Nevzlin is in Israel, but it was not said where in particular. There was no mention there that he had a lawyer, there was nothing at all about it. That's is why I could not get in contact with him".

“Yes, I could lodge a motion and ask to postpone the case for gathering additional materials. But I had no reasons for that. There was no reason that I could get in contact with Nevzlin in the end. When the Court decided to arrest Nevzlin, I immediately wrote a cassation, as only three days are allotted to file it. And only now have received information about the existence of his lawyer Kharitonov, when he started to “rinse” my name", said the assigned counsel addressing journalists.

“THEY WOULD HAVE EXPLAINED HER QUICKLY”

Dmitry Kharitonov, Nevzlin’s lawyer, acted really as if lubricated with turpentine. From a simple situation, the lawyer created real collusion. According to Kharitonov, published on the pages of the same number of the newspaper “Izvestiya”, the whole story is a special operation of the Office of the Prosecutor General with the main purpose to strip Nevzlin of his legal right to have a defense. In the words of the lawyer, the investigation knew that Nevzlin is in Israel, that he, Kharitonov, is his lawyer, but, nevertheless, they allocated to him an assigned state counsel. “Oveshnikova broke the very principle of the legal profession”, argues Kharitonov, she had to get in contact with Nevzlin, with me, to call Yukos where they would have quickly explain to her, that Nevzlin had a lawyer. I think that she has been simply used for carrying through a needed decision", said Kharitonov with indignation, although, as it turned out, he could have himself represented Nevzlin in court but preferred to play hide and seek with the court.

The society of lawyers also got involved in the scandal. Henry Reznik, the head of the Chamber of Lawyers, indignant, as always, at the situation, said that “the Prosecution has presented everything in such a way as if Nevzlin had no lawyer”. Maestro Reznik proposed to send a complaint about Oveshnikova to have a possibility “to deal seriously with her”.

However, the lawyer Dmitry Krasnov found the actions of Oveshnikova rightful. From the materials of the case followed, argued Krasnov, that the whereabouts of the man is unknown, It’s not her (as a lawyer) business to search, police are there to do it. She decided that the arrest was unlawful and lodged a complaint. With this her mandate was ended, as an assigned counsel can take part only in a court of the first instance.

“In general, I know it from my own experience”, stressed the defense lawyer, “that persons having such problems as Nevzlin, always early enough send to the Prosecution their lawyer. A lawyer had only in advance send his or her attorney’s order by registered post with an enclosure list, and, from this moment, on he would he been seen as engaged in the case”, pointed out Krasnov.

In the Office of the Prosecutor General, they told the newspaper “Izvestiya” that all procedures of the Criminal Procedure Code had been observed, and if Dmitry Kharitonov could not represent the interests of Nevzlin on the preliminary stage, that was only because of his sluggishness.

“The lawyer Kharitonov knows perfectly well that the reason for engaging an assigned counsel in a case is an order”, said Natalya Vishnyakova, the head of the Information Department of the Prosecution. “And had he been interested in defending his client, he would have come at once and presented him. Yet, we saw the certificate only on January 28. Before that, there were telephone calls, in particular, on January 24, it was proposed to him to come to the Prosecution to resolve procedural questions. He did not come, and then investigators engaged the assigned counsel. As to Nevzlin, so at the place of his residence twice were sent a summons, but the two of them received no response. Because there was information that he is in Israel, the investigators put him first on a Russian wanted list, and then on an international wanted list. In fact, all the necessary procedures were observed".

It's interesting to note that similar tricks were used by Nevzlin’s defense on the second criminal case, where Nevzlin was mentioned as one of the organizers of a series of murders and attempted murders, and for that, the court sentenced him to life imprisonment. For general respectability and in order to prove “political motives”, the defense, in 2008, initiated a complaint on behalf of Nevzlin to the European Court of Human Rights (ECtHR). When the ECtHR, in several years, considered the complaint of the paymaster of murders and attempted murders, it was found that that the presumption of innocence and impartiality of the court, recognized Nevzlin as a murderer, were observed, and there was no proverbial "political background" in the case.

They “found” only a breach that was formed artificially, sort of, they had been not given enough time to get acquainted with the case and to prepare the defense for the proceedings.

And all recalled that “Dmitry Kharitonov, the lawyer of the former co-owner of Yukos, was invited for getting acquainted with the materials of the case in December 2007, but he did not come. As the defender did not fulfill his obligations as representative of the claimant, Nevzlin was provided with an assigned counsel who studied all materials of the case and received a copy of the final letter of accusation”.

During the proceedings, in 2008, the lawyer Kharitonov took part in them until the pronouncement of sentence to his client – life imprisonment. 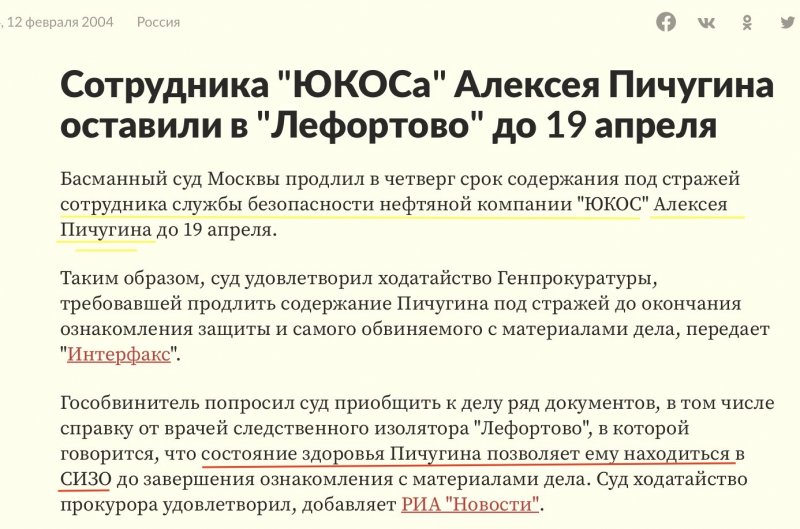 THE ARREST OF NEVZLIN’S HENCHMAN WAS PROLONGED

“On the same day 18 years ago, on February 12, 2004, Alexey Pichugin, a henchman of Nevzlin, was left in the pre-trial detention facilities “Lefortovo”. The court granted the motion of the Office of the Prosecutor General of the Russian Federation demanding to prolong the detention in custody of Pichugin until the final acquaintance of the defense and the defendant himself with the materials of the case. Apart from that, the Prosecution attached to the case medical documents certifying that the health conditions of Pichugin allowed him to be in detention on accusations of a series of murders and attempted murders, as it had been established by the court, at Nevzlin’s behest”, notes the website Prigovor.ru.

(See also the previous article “On this day, a reaver of the shares of the company “Yeniseyneftegaz” was searched”. “The plan of the embezzlement” was worked out by Alexander Temerko”. Ivan Kolesnikov, the actual doer of this affair, was sentenced to 6 years imprisonment (in absentia). The website Prigovor.ru reminds its reads of what happened on February 11, 2005.

Читать на Русском
#дело юкоса#YUKOS case#методы ЮКОСа#YUKOS methods #Nevzlin Leonid#Pichugin, Alexey
Popular articles
Two Khodorkovsky’s “Open Russias” – two shell games of Khodorkovsky
The website Prigovor.ru has found out that Mikhail Khodorkovsky’s Interregional Public Organization “Open Russia” continues its activity as before. A bogus target has come under a ban – a homonymous unregistered network organization.
Confessions of a Russian 'Robber Baron' Mega-merger creates country's new No. 1 oil firm led by billionaire tycoons
By David R. Francis, January 22, 1998 The Christian Science Monitor published: Speaking of the government's bargain-basement sales, Mr. Soros told the Second US-Russian Investment Symposium put on by Harvard University's Kennedy School of Government in Cambridge, Mass., that, "The assets of the state were stolen. It was quite repulsive. I didn't want to have anything to do with it."
Paradise not lost for Khodorkovsky and Nevzlin
Prigovor.ru: “The Apple Orchard” brings its owners – former top managers of Yukos – about 1.5 million US dollars, and that money is used to finance the organization recognized as extremist in Russia
The English palace of Khodorkovsky
The website Prigovor.ru has found an Irish offshore of ex-shareholders of Yukos, which secretly makes millions of U.S. dollars in Russia. Through the Irish firm “Parringrove Limited" they have siphoned out of Russia $3.5 million of profits from leasing mansions in the community Zhukovka.