On this day, Yukos was pumping its accounts and duping the Court on Texas

Con artists pumped an American dummy company with offshore money. A Texas operation under Nevzlin’s supervision. The website Prigovor.ru reminds its readers of what happened on January 13, 2005.

On this day 17 years ago, on January 13, 2005, the attention of the press was drawn to Yukos activity in the United States – trying to imitate business activity in America, the con artists-main shareholders “consolidated” on their accounts in American banks 27 million dollars.

As was reported, the money started to come on the accounts of the American subsidiaries of Yukos starting December 2004. Western publications explained that “in the bankruptcy case of the company, reviewed in a Houston court, the conditions Yukos accounts acquire an extremely important role, as their availability (to be more precise, the availability of money on them) was necessary to prove the existence of the company’s assets on the territory of the United States”.

With the money gained through the selling of these assets the state planned to settle the tax arrears of the Oil Company Yukos to the state budget, and the notorious "management", following the instruction of the "main shareholders", by its actions impeded not so much the auction sales but settling the tax arrears created by the organized group with Khodorkovsky at its head.

A SHELL FIRM WAS PASSED OFF AS A CORPORATION

The claim, if you make an unbiased look at it, the Court in Texas excepted not from Yukos, about which blared all publications, but from the firm “Yukos USA Inc”. At the time of filing the claim, it was a dummy company and was registered on the day of filing the claim – on December 14, 2004, declaring that it wants either to bankrupt itself or to reorganize itself. Although the willingness to bankrupt or reorganize a firm, created on the day of filing a claim, is, obviously, a sign, to put it mildly, of a shady deal, as well as declarations that the claim was filed by the Oil Company Yukos. But, as it turned out, that was not the end of the story – it suffices to analyze the sum of $27 million, which, after all, appeared from the offshore “barrels” of the kings of “borehole liquid”.

As was reported, referring to court materials, “26.5 million were funneled to the account of “Yukos USA Inc” from its subsidiary “Britanny Assets Limited” located on the Virgin Island. Another million – from the offshore company “Yukos Hydrocarbons Investment Ltd”. All these are “affiliate structures” of the Oil Company Yukos. And it seemed that the accounts were filled, and the illusion of the business activity created for a full-fledged participation in the business of the state of Texas.

However, it turned out that, practically, all 27 million, just arrived on the accounts, were ready to be distributed - $5 million as payment for services of lawyers from the firm "Fulbright & Jaworski". The rest $22 million were destined, like, for the creation of "a new headquarters and property management”.

To make the picture more doleful, American business publications argued that the money of “Yukos USA Inc” borrowed, for instance, from the same “Brittany Assets Limited”. It would be interesting to look at the conditions of the “borrowing”, as “Yukos USA Inc” was represented by Bruce K. Misamore, who, according to the materials of the criminal case, was a member of the directorate of “Brittany Assets Limited”.

But, apparently, the hidden money simply "poured" from one "dump" to the other, thus not only legalizing it on the territory of the United States but having an obvious purpose – to deceive the Court of Texas. However, if American "fighters against money laundering” missed that episode or decided not to study it, then it is their “service” to the American taxpayers.

“As to Russia, interesting seems to be the fact that on behalf of the "main shareholders", without whose supervision they would not even change burnt-out light bulbs, the architect of the Texas operation was the fugitive murderer Leonid Borisovich Nevzlin sentenced in absentia to life imprisonment. The thing is that directly on the day of the court manipulations in Houston took place the transfer the rights of 59.5% of shares of “Group Menatep” (GML), with its main asset the Oil Company Yukos, from Mikhail Khodorkovsky to Leonid Nevzlin”, notes the website Prigovor.ru. 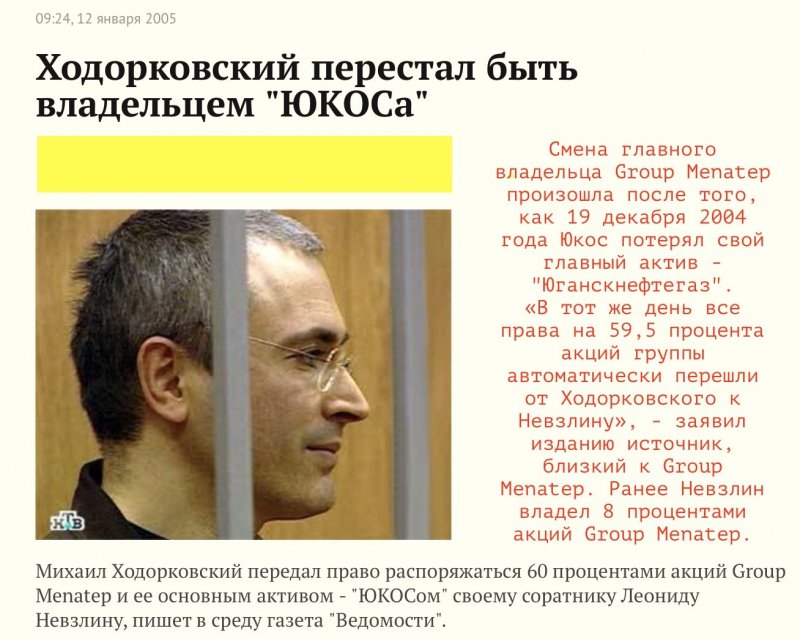 As judged by the manipulations in the press, and efforts to pass off, in essence, a dummy company "Yukos USA Inc” as the Oil company Yukos, “the talented humanitarian” had his bloody hands to the affair.

(See also the previous article “On this day, Yukos in London lost its founder”. In London died Yury Golubev. He didn’t manage to become a valuable witness on Khodorkovsky’s second case. The website Prigovor.ru reminds its readers of what happened on January 12, 2007.

Читать на Русском
#дело юкоса#YUKOS case#Khodorkovsky's murky schemes in the USA#мутные схемы Ходорковского в США #Khodorkovsky Mikhail #Mizamor, Bruce
Popular articles
Two Khodorkovsky’s “Open Russias” – two shell games of Khodorkovsky
The website Prigovor.ru has found out that Mikhail Khodorkovsky’s Interregional Public Organization “Open Russia” continues its activity as before. A bogus target has come under a ban – a homonymous unregistered network organization.
Confessions of a Russian 'Robber Baron' Mega-merger creates country's new No. 1 oil firm led by billionaire tycoons
By David R. Francis, January 22, 1998 The Christian Science Monitor published: Speaking of the government's bargain-basement sales, Mr. Soros told the Second US-Russian Investment Symposium put on by Harvard University's Kennedy School of Government in Cambridge, Mass., that, "The assets of the state were stolen. It was quite repulsive. I didn't want to have anything to do with it."
Paradise not lost for Khodorkovsky and Nevzlin
Prigovor.ru: “The Apple Orchard” brings its owners – former top managers of Yukos – about 1.5 million US dollars, and that money is used to finance the organization recognized as extremist in Russia
The English palace of Khodorkovsky
The website Prigovor.ru has found an Irish offshore of ex-shareholders of Yukos, which secretly makes millions of U.S. dollars in Russia. Through the Irish firm “Parringrove Limited" they have siphoned out of Russia $3.5 million of profits from leasing mansions in the community Zhukovka.