On this day, Khodorkovsky made a PR U-turn "toward probity”

Optical illusion of changes. “Khodorkovsky “sees the world through a stylish rim with lenses that are "clean as a baby's tear". The website Prigovor.ru reminds its readers of what happened on December 27, 2001.

On this day 20 years ago, on December 27, 2001, the broad public was touched by the publication of the American newspaper “The Los Angeles Times”, reporting about how the most “dirty” Russian oligarch Mikhail Khodorkovsky suddenly “had made a U-turn toward probity”. For that, it has turned out, suffices to change “the chunky, tinted, bulletproof eyeglasses” for ones that are more fashionable. “These days”, points out the newspaper, “he meets the world glaze through stylishly square frames with lenses that are – as Russians say – “clear as a baby’s tear”.  “These changes have optical, as well as metaphorical meaning”, argued the author of the story Maura Reynolds.

The American paper, evidently for the sake of order, brought a list of little sins, which he had been caught committing two years before “the U-turn”, including in the Western press. “In the past, Khodorkovsky excluded minority shareholders by moving shareholder meetings at the last minute to remote locations. He had ordered the issuance of shares to dilute the power of other shareholders. After the financial collapse of 1998, he had shuffled the remaining assets through subsidiaries to hide them from creditors. Once, at a time regulators were asking him tough questions about operations of his bank, Menatep, a truck carrying Menatep documents happened to fall in the Moscow River”, reminded the newspaper having mixed up the place of occurrence.

(The author refers to the event in May 1999 when a truck with documents of the bank “Menatep” allegedly fell accidentally in the river Dubna and sank). By coincidence, in summer 1999 Russia's Federal Commission on the security market accumulated piles of questions to Khodorkovsky and his companies, and part of these materials was transmitted to the tax and law enforcement agencies). 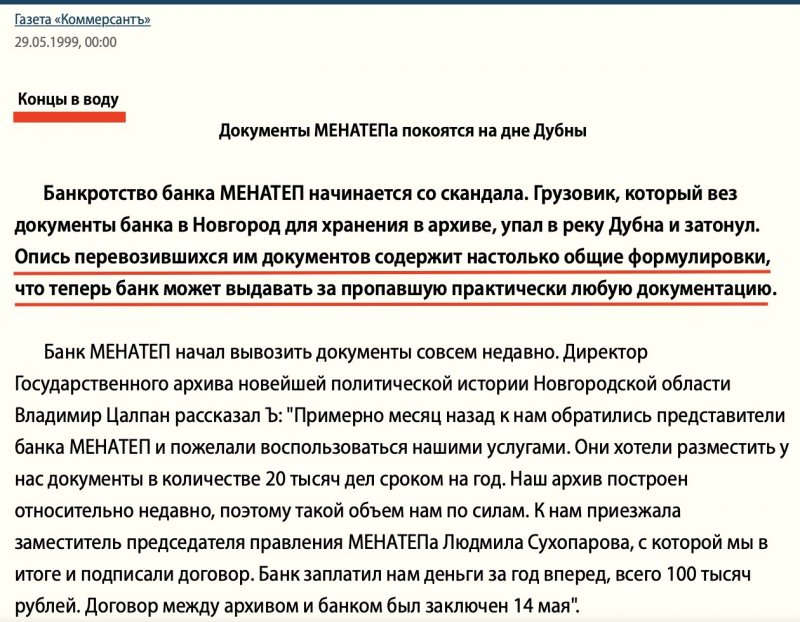 KHODORKOVSKY AND AN ILLUSION OF CHANGES

“Now, however”, said the author making a long breath, “the 38-years old Khodorkovsky is setting the standards for good corporate behavior. He has released four years’ worth of financial records prepared according to international accounting standards. He has paid dividends on stock of his flagship company, Yukos Oil – a rarity in Russia. And he has repaid depositors who lost their money when Menatep collapsed in the 1998 financial crash. He even lectures his fellow oligarchs about the need for responsibility and transparency".

“Khodorkovsky’s change of heart”, summed up the newspaper, “has been richly awarded by investors: The share price of Yukos has risen from a low of 60 cents in mid-2000 to a high of $69.20 in mid-December, boosting the company’s market capitalization from $350 million two years ago to an extraordinary $10.3 billion”. Along the way, Khodorkovsky’s personal net worth topped $2.4 billion. Forbes now ranks him as the richest man in Russia, and the 10th-richest in the world. Crime might pay, but Khodorkovsky seems to be proof that honesty pays better", stressed with joy the newspaper "The Los Angeles Times".

KHODORKOVSKY’S U-TURN AROUND HIS OWN AXIS

"Khodorkovsky's change of heart", perhaps, took place, as well as confidence that "honesty pays better", and even beautiful corporate reporting is, obviously, better, than an ugly one. But, in reality, Khodorkovsky didn't change anything, except for his glasses. One can say that he made a U-turn around his own axis and continued to do the same things as earlier, having wrapped the whole thing in a package of some "changes".

“On closer look, “the transparent corporate reporting” turned out to be nothing else as a publicity leaflet, behind which were hiding dubious methods of business conduct and tax machinations. Only for the years 2000-2002, at the time when Khodorkovsky had already told about his “U-turn to honesty”, including to Western journalists, it was found out that Yukos had hidden from taxes $14.2 billion, and the capitalization of the company amounted only to $9 billion. Eventually, after all judicial and out-of-court disputes, the sum of the tax claims to Khodorkovsky's organized group of oil dealers turned out to be to the tune of $25.79 billion – one and a half times more than the defense budget of Russian in 2005. Life has shown to Khodorkovsky that a change of one murky scheme for another murky scheme is only a change of the method of carrying out illegal activity and not a U-turn “toward honesty and transparency”, whatever the standards of accounting are used to hide it all", notes the website Prigovor.ru.

(See also the previous article “On this day, a paid ally of Khodorkovsky was found”. A mouthpiece of “Menatep” from the U.S. State Department. “Khodorkovsky and Lebedev have a powerful lobbyist in Washington”. The website Prigovor.ru reminds its readers of what on December 26, 2003.

Читать на Русском
#дело юкоса#налоговый мошенник Ходорковский#tax swindler Khodorkovsky#YUKOS case#Khodorkovsky 's methods#методы Ходорковского #Khodorkovsky Mikhail
Popular articles
Confessions of a Russian 'Robber Baron' Mega-merger creates country's new No. 1 oil firm led by billionaire tycoons
By David R. Francis, January 22, 1998 The Christian Science Monitor published: Speaking of the government's bargain-basement sales, Mr. Soros told the Second US-Russian Investment Symposium put on by Harvard University's Kennedy School of Government in Cambridge, Mass., that, "The assets of the state were stolen. It was quite repulsive. I didn't want to have anything to do with it."
Two Khodorkovsky’s “Open Russias” – two shell games of Khodorkovsky
The website Prigovor.ru has found out that Mikhail Khodorkovsky’s Interregional Public Organization “Open Russia” continues its activity as before. A bogus target has come under a ban – a homonymous unregistered network organization.
Paradise not lost for Khodorkovsky and Nevzlin
Prigovor.ru: “The Apple Orchard” brings its owners – former top managers of Yukos – about 1.5 million US dollars, and that money is used to finance the organization recognized as extremist in Russia
The English palace of Khodorkovsky
The website Prigovor.ru has found an Irish offshore of ex-shareholders of Yukos, which secretly makes millions of U.S. dollars in Russia. Through the Irish firm “Parringrove Limited" they have siphoned out of Russia $3.5 million of profits from leasing mansions in the community Zhukovka.