On this day, Khodorkovsky was leveled $14 billion of stolen taxes

The most transparent tax swindler. The sum of the tax claims to Yukos for 2000-2002 exceeded $14 billion. The website Prigovor.ru reminds its readers of what happened on November 2, 2004.

On this day 17 years ago, on November 2, 2004. Specialists of the tax service completed the inspection of the company Yukos for the year 2002. The inspection act for this period indicated exposed violation of the tax legislation the total sum exceeding 193 billion rubles ($6.7).

According to the Federal Tax Service, the tax arrears of Yukos for 2002 were as follows:

- with regard to penalties – over 72 billion rubles.

The final total of the claims amounted to 193 billion 25 million 458 thousand 6 rubles.

(See also the article “Yukos as fraudulent tax-dodger”. and the article “On this day, "tax skeletons" dropped out of the Yukos closets”).

The newspaper “Kommersant", having reported that "the tax claims to the company amounted to $14.2 billion, came to the conclusion that "the state values Yukos more and more highly". The media outlet pointed out that the company, of course, was going to object to the conclusions of the tax specialists, nevertheless, the previous efforts to call in question tax rears had been not that successful. Indeed, at the moment when it became known that Yukos “had taken away” from the state budget $14.2 billion, the capitalization of it, according to stock trading, was only about $9 billion. 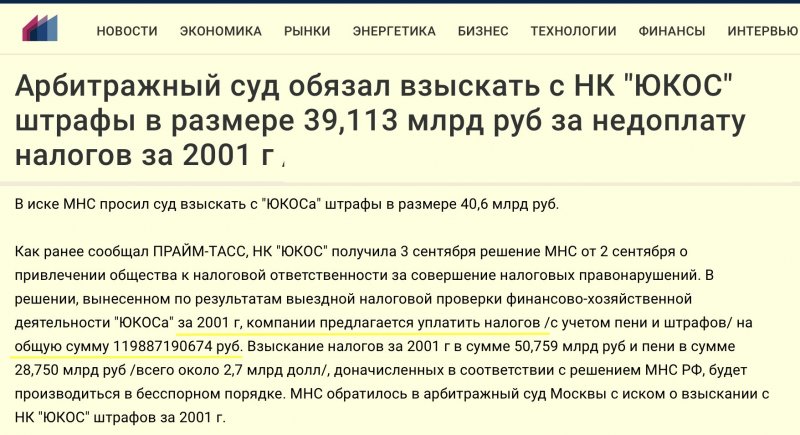 Such astronomic sums of tax claims only for two years have presented to the world not only the scale of tax crimes in which got stuck "the most transparent" company of Mikhail Khodorkovsky, but also the epic deceit of different caliber stockholders and investors taken in by the beautiful financial reports of "Western standards", as well as by "image-building" publications about Yukos in the foreign press, where, as if by command, they have stopped to notice the muddy past of the "oil robber" who has suddenly become “a talented oil tycoon”.

Moreover, according to court documents, Yukos itself as well as its managers, "the main shareholders", were not notable for tax discipline.

(See also the article “Tax mechanics of Khodorkovsky as a physical person and the article “On this day, the tax dodger Shakhnovsky was made to get into gears”).

They "diverted" taxes to offshores, far off from the budget, and not only the taxes of the company as a juristic person but also they themselves – these billionaires, as money-grubber - evaded paying taxes as physical persons as well. And these were the same risks of which the stockholders and investors of the company, to various extend, were aware of – the stories in the Russian and foreign press about various machinations in Yukos had been appearing in the Russian as well as foreign press from the end of the 1990s. Complaints against the company amassed, the scheme of tax evasion continued to work, and, by all means, it could not continue ad infinitum.

Nevertheless, having changed “the image” and the format of accounting, Khodorkovsky, evidently, was not in a hurry to abandon the idea of creating a “tax pyramid”, to say nothing of informing investors about possible fiscal burdens and, in fact, he continued to cheat them. But those who were in the know, particularly the well-cared-for directors of Yukos and “Menatep”, with foreign passports of various countries, obviously, thought that they merely “clean out” a yet another colony.

“But still, the tax fraud has been exposed, and justice, about which practically all like to reason, has prevailed. However, Western “friends” of Khodorkovsky and all this colonial directorate headed by adjoining to it political leaders of the United States, European Union, including European activists and members of parliaments, essentially, have turned out to be defenders of the tricksters from the “most transparent” company headed by Khodorkovsky. They hypocritically have substituted their estimates of Yukos crimes with some estimates of “the situation with democracy in Russia”. And, to be sure, guilty for them is not he who has cheated and stolen, but he who has exposed this theft, brought the case to court and to guilty verdict. On the other hand, for money these “fighters for the rights of oligarchs”, might as well demonstrate a lot of other things”, notes the website Progovor.ru.

(See also the previous article “On this day, the State Department took care of the rights of tax criminals from Yukos”. “In the shares of our company are invested Pension Funds money of five American states and it means that American pensioners are becoming big pensions”. The website Prigovor.ru reminds its readers of what happened on November 1, 2003.

Читать на Русском
#дело юкоса#налоговый мошенник Ходорковский#tax swindler Khodorkovsky#YUKOS case #Khodorkovsky Mikhail
Popular articles
Confessions of a Russian 'Robber Baron' Mega-merger creates country's new No. 1 oil firm led by billionaire tycoons
By David R. Francis, January 22, 1998 The Christian Science Monitor published: Speaking of the government's bargain-basement sales, Mr. Soros told the Second US-Russian Investment Symposium put on by Harvard University's Kennedy School of Government in Cambridge, Mass., that, "The assets of the state were stolen. It was quite repulsive. I didn't want to have anything to do with it."
Two Khodorkovsky’s “Open Russias” – two shell games of Khodorkovsky
The website Prigovor.ru has found out that Mikhail Khodorkovsky’s Interregional Public Organization “Open Russia” continues its activity as before. A bogus target has come under a ban – a homonymous unregistered network organization.
Paradise not lost for Khodorkovsky and Nevzlin
Prigovor.ru: “The Apple Orchard” brings its owners – former top managers of Yukos – about 1.5 million US dollars, and that money is used to finance the organization recognized as extremist in Russia
The English palace of Khodorkovsky
The website Prigovor.ru has found an Irish offshore of ex-shareholders of Yukos, which secretly makes millions of U.S. dollars in Russia. Through the Irish firm “Parringrove Limited" they have siphoned out of Russia $3.5 million of profits from leasing mansions in the community Zhukovka.