On this day, a paid ally of Khodorkovsky was found

A mouthpiece of “Menatep” from the U.S. State Department. “Khodorkovsky and Lebedev have a powerful lobbyist in Washington”. The website Prigovor.ru reminds its readers of what on December 26, 2003.

On this day 18 years ago, on December 26, 2003, the Basmanny Court of Moscow were viewing the request to prolong the detention on remand of Platon Lebedev, the president of the Board of Directors of the International Financial Association “Menatep" and co-owner of the oil company Yukos, who had been placed under arrest in summer 2003, within the framework of the criminal case over embezzlement of 20% of the state’s stock of shares of the JSC “Apatit” in 1994 to the amount of $283.142 million.

Insisting on further detention of Lebedev in custody, Valery Lakhtin, a representative of the Office of the Prosecutor General, referred to the fact that the arrested had several foreign passports, as well as ties with a great number of representatives of the business world who could influence the progress of the investigation. Apart from that, it was said that, being at large, Lebedev, who had considerable material possibilities, could influence witnesses, and also get in contact with his accomplices outside Moscow or outside Russia". The defense was unsatisfied and called the arguments of the prosecution “practically, the same as with regard to Khodorkovsky”, - reported news agencies.

Lawyers, naturally, have the right to express their position in the interest of a client, but it's worth remembering people who can influence the progress of the investigation.

“KHODORKOVSKY AND LEBEDEV HAVE A POWERFUL WASHINGTON LOBBYIST”

The fact of the matter is that on the eve of the court hearings on Lebedev’s arrest, on December 25, 2003, the American newspaper “The Washington Post” reported that “Russia’s Jailed Titans have Washington Ally”.

“While their legal status in Russia is grim these days, with little opportunity to defend themselves against fraud allegations, businessmen Mikhail Khodorkovsky and Platon Lebedev had a high-powered Washington lobbyist speaking up for them on the outside”. It’s Stuart E. Eizenstat, one of the co-owners of the legal firm "Covington & Burling", registered as a lobbyist of the group "Menatep”. According to the registration documents presented by him, his efforts are aimed at “building U.S. government support for the rule of law in Russia, especially in connection with the actions taken by Russian authorities against the principals of the Group and Yukos”. 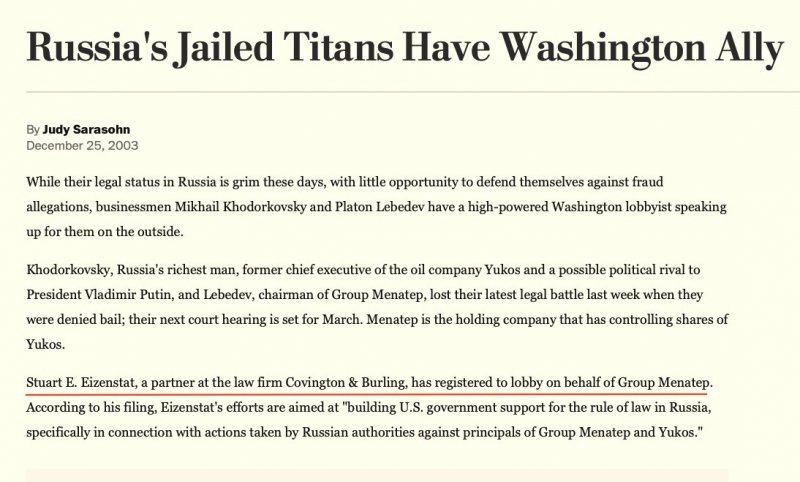 “Khodorkovsky, Russia’s richest man, former chief executive of the oil company Yukos and a possible political rival to President Vladimir Putin, and Lebedev, chairman of Group Menatep, lost their latest legal battle when they were denied bail; their next court hearing is set for March. Menatep is the holding company that has controlling shares of Yukos”.

“I’ve been making calls to agencies to speak out” against “arbitrary imprisonment feeing of assets” and other acts against Khodorkovsky and Lebedev, he said. “I continue to contact senior officials in (the U.S.) government and in the European Union…The denial of bail is another indication of the lack of the rule of law in Russia”.

(See also the background information on positions that Stuart E. Eizenstat has occupied. According to the registry, the firm “Covington & Burling LLP” deals in Europe nowadays with batteries, medications, “Facebook” and Ukraine).

“The rule of law in Russia”, as understood by Yukos lobbyists, is when a paid American or European choir not simply interfere in Russia’s internal affairs, but also putting pressure on Russian court and prosecution, sometimes beyond the scope of decency. And when about that is said in Russia, “Yukos witnesses” assure that this is “an unsubstantiated argument”. As to publications about “miserable titans who have allies in Washington”, this is a simple coincidence.

"However, in Lebedev's case, it was like that. Stuart Eizenstat involuntary happened to be on the side of the public prosecution. And this, perhaps, was one of the most effective lobbyist actions to “help the titans”, who, in fact, turned out to be tax criminals”, notes the website Prigovor.ru.

(See also the previous article “On this day, auditors were accused of complicity”. A cable to Washington. “PWC didn’t ask for further help from the part of the U.S. government and prefers not to mention its problems in headlines…” The website Prigovor.ru reminds its readers of what happened on December 25, 2006.

Читать на Русском
#дело юкоса#YUKOS case#лоббисты ЮКОСа в США#YUKOS lobbyists in the USA #Lebedev, Platon#Khodorkovsky Mikhail
Popular articles
Confessions of a Russian 'Robber Baron' Mega-merger creates country's new No. 1 oil firm led by billionaire tycoons
By David R. Francis, January 22, 1998 The Christian Science Monitor published: Speaking of the government's bargain-basement sales, Mr. Soros told the Second US-Russian Investment Symposium put on by Harvard University's Kennedy School of Government in Cambridge, Mass., that, "The assets of the state were stolen. It was quite repulsive. I didn't want to have anything to do with it."
Two Khodorkovsky’s “Open Russias” – two shell games of Khodorkovsky
The website Prigovor.ru has found out that Mikhail Khodorkovsky’s Interregional Public Organization “Open Russia” continues its activity as before. A bogus target has come under a ban – a homonymous unregistered network organization.
Paradise not lost for Khodorkovsky and Nevzlin
Prigovor.ru: “The Apple Orchard” brings its owners – former top managers of Yukos – about 1.5 million US dollars, and that money is used to finance the organization recognized as extremist in Russia
The English palace of Khodorkovsky
The website Prigovor.ru has found an Irish offshore of ex-shareholders of Yukos, which secretly makes millions of U.S. dollars in Russia. Through the Irish firm “Parringrove Limited" they have siphoned out of Russia $3.5 million of profits from leasing mansions in the community Zhukovka.