On this day, auditors were accused of complicity

A cable to Washington. “PWC didn’t ask for further help from the part of the U.S. government and prefers not to mention its problems in headlines…” The website Prigovor.ru reminds its readers of what happened on December 25, 2006.

On this day 15 years ago, on December 25, 2006, the scandal, flared up around the company "PriceWaterhouseCoopers", gained new development – the audit company with a world name was accused of complicity in the grey tax schemes of the oil company Yukos.

(For your reference: see the shortlist of problems with the law of the company "PricewaterhouseCoopers”, as of 2007).

The news that the Tax Service accused the company “ПрайсвотерхаусКуперс Аудит”, the Russian affiliate of “PricewaterhouseCoopers”, of complicity in the tax schemes of Yukos, became known on the eve after the Arbitration Court of Moscow had admitted to examination a statement of claim of the Russian capital’s Tax Inspection. Apart from complaints towards auditors with regard to the preparation of "double reports" – the first type of the report had been formalized for investors and potential shareholders, and the second variant for the leadership of Yukos, with references to miscalculations and risks, – the auditor, as stressed the newspaper “Kommersant”, was accused “of not reporting about the found transgressions to the financial regulatory agency  “Rosfinmonitoring”, as it is demanded by the law “On counteracting legalizing (laundering) proceeds gained by illegal means, and financing of terrorism”.

In its turn, Mike Kubena, the general director of “PriceWaterhouseCoopers” in Russia, was indignant and said that "the audit conclusion pertaining to the accounting statements of the company Yukos for 2002, had been made in accordance with the professional standards, current laws, and ethical norms of the auditing activity, which we follow in our work". As the newspaper "RBK" pointed out, the leadership of the auditor is going not only to maintain its position in court but also "in a dialogue with state agencies, responsible for the regulation of auditing activity". 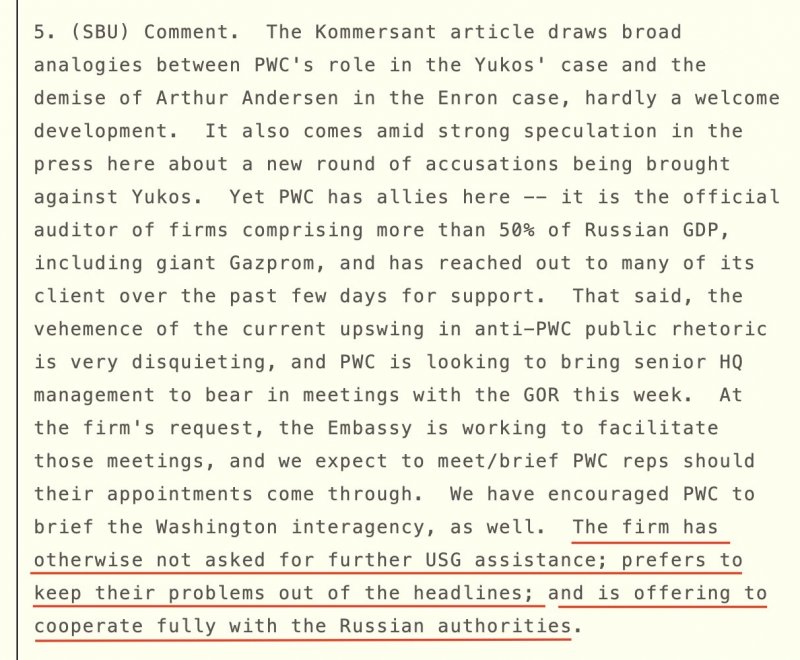 “A STINKING LETTER” TO WASHINGTON

One of the channels "for establishing a dialogue with the authorities" became the U.S. Embassy in Moscow. And if in autumn 2006, representatives of “PricewaterhouseCoopers,” during their contacts with American diplomats, on the one hand, had complained about “politically motivated” life, and, on the other hand, had discussed the possibility of leaving the Russian market, assessing it as growing and perspective, as early as in December 2006 they had backed off a bit as to their spontaneous willingness  to slam the door.

So, from the cable 06MOSCOW13123_a from December 27, 2006, follows that – about the claims of the Federal Tax Service to the auditors had been announced as early as on December 11 – they received in their hands the official documents with their list.

- PWC never refused to investigate or to discuss Yukos case, but "the Russian Government has never seriously asked PWC to cooperate in the case against Yukos'.

- the efforts to find the support of Finance Minister Alexey Kudrin were to no avail.

(Meanwhile, the position of Kudrin had been presented long ago and on repeated occasions. And it’s not completely clear what the Americans had been expected from Finance Minister who had called Yukos “number one in tax dodging”. Leonid Nevzlin, the fugitive scam-artist, and mastermind of serial murders, threw a temper tantrum to the address of Kudrin. But the essence is simple – Khodorkovsky, Nevzlin, and the rest of the group of the "main shareholders" had pulled off machinations and had committed tax crimes considering Russia as a "fodder base" and a "territory of the enemy").

- The American Embassy didn’t like at all the information background that had emerged around the investigation. "The Kommersant article draws broad analogies between PWC’s role in the Yukos’ case and the demise of Arthur Andersen in the Enron case, hardly a welcome development”, pointed out the author of the cable. “It (the story with the PWC) also comes amid strong speculations in the press here about a new round of accusations being brought against Yukos”.

- PWC, hoping to find moral support, addressed its clients in Russia, as allies (like, at least, you have to tell that we have nothing to do with Yukos machinations)

- “That said”, stressed the author of the Depeche, “the vehemence of the current upswing in anti-PWC public rhetoric is very disquieting, and PWC is looking to bring senior HQ management to bear in meetings with the Government of Russia (GOR) this week. At the firm’s request, the Embassy is working to facilitate those meetings and we expect to meet/brief PWC reps to brief the Washington interagency, as well. The firm has otherwise not asked for further U.S. Government assistance and is offering to cooperate fully with the Russian authorities. Burns". 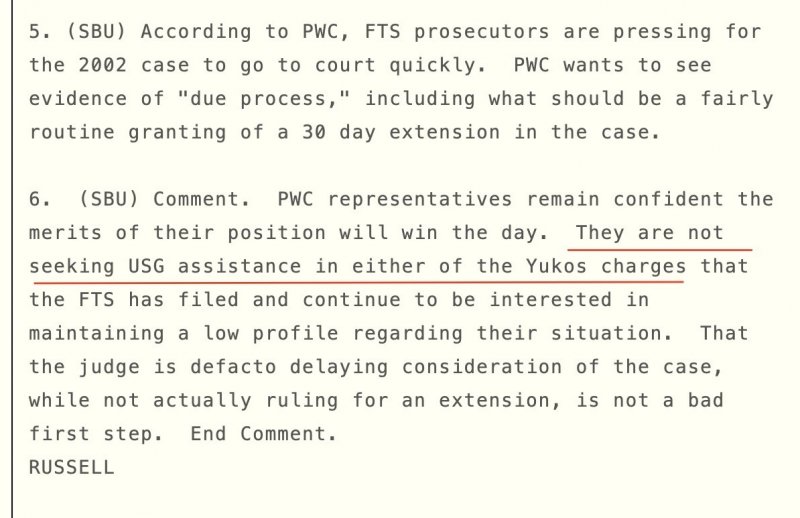 In January 2007, the U.S. Embassy stated once more: “PWC representatives remain confident the merits of their position will win the day. They are not seeking U.S. Government assistance in either of the Yukos charges that the Federal Tax Service has filed and continue to be interested in maintaining a low profile regarding their situation”.

And in summer 2007 it became known about the recall of the audit, and, for the most part, because of the murky activity of Yukos main shareholder – the Group “Menatep” (GML)”, noted the website Prigovor.ru.

(See also the previous article “On this day, “Menatep” pulled up an affair with the stock of shares belonging to the state. “Rising star of the oil market”. Kagalovsky looks at the ceiling. “A solid firm and a strategic partner of Yukos, “seemingly, deals with oil”. The website Prigovor.ru reminds its readers of what happened on December 24, 1996.

Читать на Русском
#дело юкоса#налоговый мошенник Ходорковский#tax swindler Khodorkovsky#YUKOS case#Khodorkovsky 's schemes#схемы Ходорковского #Nevzlin Leonid#Khodorkovsky Mikhail
Popular articles
Confessions of a Russian 'Robber Baron' Mega-merger creates country's new No. 1 oil firm led by billionaire tycoons
By David R. Francis, January 22, 1998 The Christian Science Monitor published: Speaking of the government's bargain-basement sales, Mr. Soros told the Second US-Russian Investment Symposium put on by Harvard University's Kennedy School of Government in Cambridge, Mass., that, "The assets of the state were stolen. It was quite repulsive. I didn't want to have anything to do with it."
Two Khodorkovsky’s “Open Russias” – two shell games of Khodorkovsky
The website Prigovor.ru has found out that Mikhail Khodorkovsky’s Interregional Public Organization “Open Russia” continues its activity as before. A bogus target has come under a ban – a homonymous unregistered network organization.
Paradise not lost for Khodorkovsky and Nevzlin
Prigovor.ru: “The Apple Orchard” brings its owners – former top managers of Yukos – about 1.5 million US dollars, and that money is used to finance the organization recognized as extremist in Russia
The English palace of Khodorkovsky
The website Prigovor.ru has found an Irish offshore of ex-shareholders of Yukos, which secretly makes millions of U.S. dollars in Russia. Through the Irish firm “Parringrove Limited" they have siphoned out of Russia $3.5 million of profits from leasing mansions in the community Zhukovka.