On this day, the Pichugin’s case was sent for retrial

«24 years in prison an exceedingly mild verdict that doesn't correspond to the gravity of the committed crimes». Prigovor.ru reminds its readers of what happened on February 22, 2007.

On this day 15 years ago, on February 22, 2007, in the center of the public attention was the “homicide department of Yukos”. On the eve, the Judicial Chamber on Criminal Cases of the Supreme Court of the Russian Federation by its ruling set aside the sentence of the Moscow City Court from August 17, 2006, concerning Pichugin, and sent it for retrial in a new composition of the court.

According to the quashed verdict, Pichugin should serve his term of imprisonment for 24 years in a colony with a strict regime on the accusation of organizing murders and attempted murders.

However, the defense of Pichugin, having called such a verdict “illegal”, demanded to end the criminal persecution of Alexey Pichugin. “Lawyers of other defendants were also dissatisfied with the decision of the court”, pointed out the newspaper “Kommersant”, implying under this members of a killer gang, the actual doers of Pichugin’s contracts, who, in his turn, acting at the behest of Leonid Nevzlin, sentenced in 2008 to lifelong imprisonment. 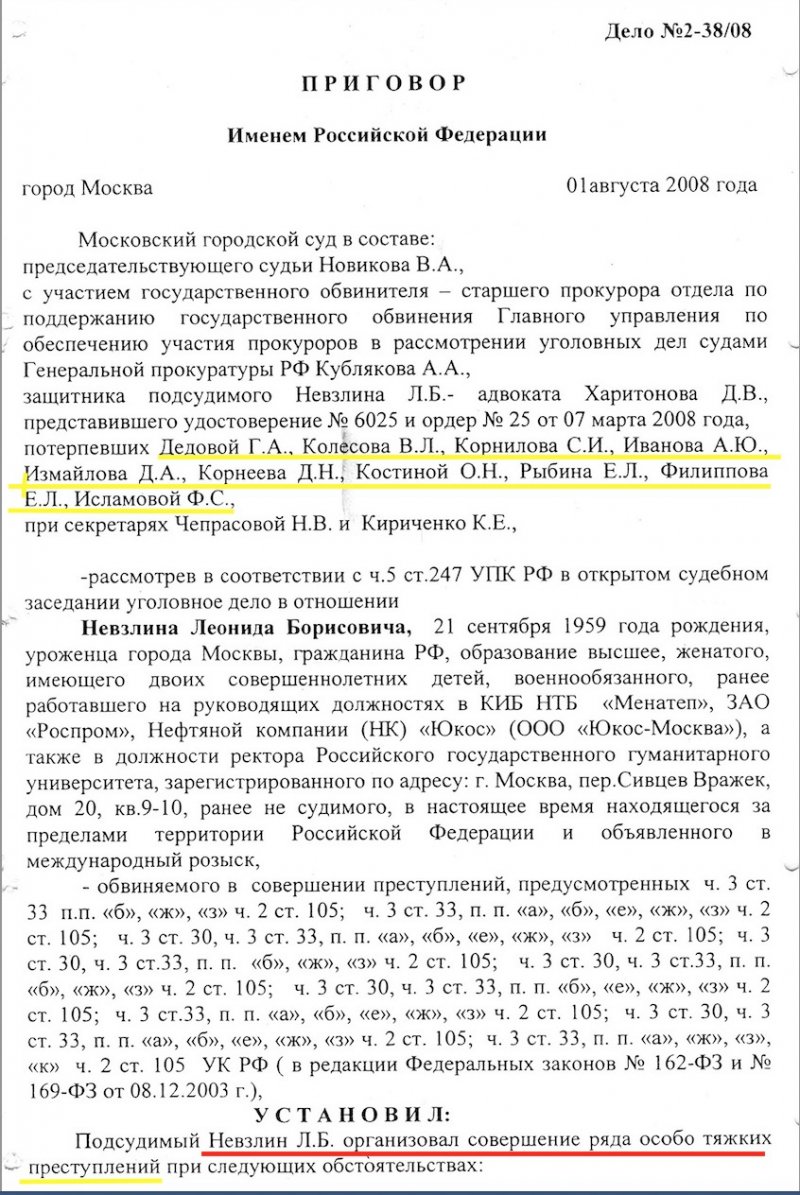 (See also the article “On this day, a woman was shot at the behest of Nevzlin”. “Nevzlin together with Pichugin organized the murder of Korneyeva V.A. which was committed on January 21, 1998, by Shapiro with the help of Ovsyannikov”).

(See also the article “On this day, Nevzlin’s gang blew up the apartment of a councilor of Moscow’s mayor”. To kill for $15,000. “Pichugin, at the behest of Nevzlin, handed over to Gorin a photo of the aggrieved, indicated her address”).

(See also the article “How the Mayor of the town Nefteyugansk was killed. Pichugin became part of the criminal collusion with Nevzlin”).

(See also the article “On this day, the Nevzlin’s gang tried to kill Yevgeny Rybin”. “On November 24, 1998, Tsigelnik and Reshetnikov, having received information from Pichugin that Rybin in the evening would be at a party…”).

"The money came from Nevzlin to Pichugin"

(See also the article “On this day, Nevzlin was neutralizing witnesses”. In November, “Gorin said if Pichugin would not settle this question, he would go for a meeting with Nevzlin”. The website Prigovor.ru reminds its readers of what happened on November 20, 2002).

However, along with the lawyers of Pichugin and of the group of the bandits under his control, the prosecution also exercised the right of appeal. The Office of the Prosecutor General of Russia, having estimated the verdict of the court, came to the conclusion that the term of 24 years for Alexey Pichugin “is exceedingly mild and doesn’t correspond to the gravity of the committed crimes”.

“While imposing the punishment, the court didn’t take into account that, as the result of the activities of Pichugin as organizer of the crimes, three persons died and another four persons were exposed to a deadly danger”, was pointed out in the motion to the cassation.

Thus, as the website Prigovor.ru expected in August 2006, the verdict didn’t satisfy any side of the process, and "it can be changed during the consideration of the cassation appeal"

And so it happened – the verdict against Alexey Pichugin from August 17, 2006, was set aside, the case was returned for new consideration in Moscow City Court with a different composition of judges. Many people already at that time, realizing the essence of the charges brought against the defendant, concluded that Alexey Pichugin, the organizers of the murders, would not go at large.

It’s characteristic that, against the backdrop of this decision of the cassation instance, Leonid Nevzlin, the mastermind of a series of contract murders and attempted murders who had escaped to Israel, didn’t dare to comment the turn in the case of his henchman, and ordered his own “press service” to do it, which spread Nevzlin’s hackneyed phrases about the “custom justice”.

Yet, when it came to the analyses of the similar claims of Nevzlin in the European Court of Human Rights (ECtHR) in Strasbourg, it turned out that “the Court has no reason to find otherwise in the present case as it was not provided with any evidence of an alleged ulterior purpose behind the applicant’s criminal prosecution. Neither was the Court provided with evidence of the alleged discrimination against the applicant during the proceedings”.

“To put it simpler, Nevzlin lied, both with regard to Pichugin’s case and concerning his own case. It turned out that the court, quite reasonably, set a life-long prison term to the citizen Nevzlin for organizing contract murders and attempted murders with the hands-on assistance of Alexey Pichugin”, notes the website Prigovor.ru.

(See the previous article “On this day, Yukos persecuted a minority shareholder”. To Khabib Nurgamzayev, an owner of 100 shares, an "information bath" was organized because he had dared to file a claim against Yukos in the Arbitration Court of Moscow. The website Prigovor.ru reminds its readers of what happened on February 21, 2005.

Читать на Русском
#дело юкоса#YUKOS case#методы ЮКОСа#YUKOS methods#убийцы из ЮКОСа#murderers from YUKOS #Nevzlin Leonid#Pichugin, Alexey
Popular articles
Two Khodorkovsky’s “Open Russias” – two shell games of Khodorkovsky
The website Prigovor.ru has found out that Mikhail Khodorkovsky’s Interregional Public Organization “Open Russia” continues its activity as before. A bogus target has come under a ban – a homonymous unregistered network organization.
Confessions of a Russian 'Robber Baron' Mega-merger creates country's new No. 1 oil firm led by billionaire tycoons
By David R. Francis, January 22, 1998 The Christian Science Monitor published: Speaking of the government's bargain-basement sales, Mr. Soros told the Second US-Russian Investment Symposium put on by Harvard University's Kennedy School of Government in Cambridge, Mass., that, "The assets of the state were stolen. It was quite repulsive. I didn't want to have anything to do with it."
Paradise not lost for Khodorkovsky and Nevzlin
Prigovor.ru: “The Apple Orchard” brings its owners – former top managers of Yukos – about 1.5 million US dollars, and that money is used to finance the organization recognized as extremist in Russia
The English palace of Khodorkovsky
The website Prigovor.ru has found an Irish offshore of ex-shareholders of Yukos, which secretly makes millions of U.S. dollars in Russia. Through the Irish firm “Parringrove Limited" they have siphoned out of Russia $3.5 million of profits from leasing mansions in the community Zhukovka.