On this day, the Nevzlin’s gang tried to kill Yevgeny Rybin

“On November 24, 1998, Tsigelnik and Reshetnikov, having received information from Pichugin that Rybin in the evening would be at a party…” The website Prigovor.ru reminds its readers of what happened on November 24, 1998.

On this day, on November 24, 1998, in Moscow, attempted murder was executed on the manager of the East Oil Company (VNK), on Yevgeny Rybin, a Russian representative of the Austrian firm “East Petroleum GmbH”. This is how the Kommersant newspaper described this incident in 1998 a few days later.

“AND OPEN FIRE FROM THE ASSAULT RIFLE…”

“Until 10.30 p.m. Rybin was at a party which was organized by one of his colleagues from VNK (his name in the interests of safety is not disclosed), on Udaltsova street. Then he came down on the elevator and went out on the street. There the company car "Volga" with a bodyguard was waiting for him. The distance from the entrance to the car was not more than three meters, but he could not get to it. Out of the darkness leaped out an unknown man and opened fire from an assault rifle. Fortunately, not one bullet out of a dozen did hit the “VNK” manager. According to Rybin, having heard the first claps, he first got down and then rushed back to the entrance of the house. 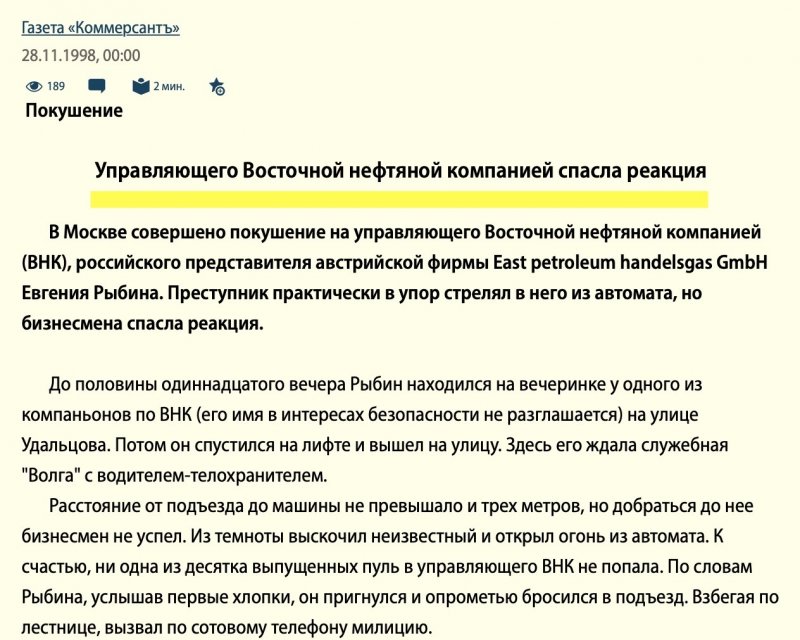 The firm “East Petroleum Handelsgaz GmbH”, explained the newspaper “Kommersant”, has been working more than five years of the Russian market. The company owns the third biggest stock of shares of the “VNK”, as well as securities of “Tomskneft” and the Achinsk Oil Refinery. According to the information from the law enforcement agencies, the newspaper said, in recent times the Austrians have been involved in several lawsuits with their partners in Russia. In some arbitration, litigations takes part also "VNK" which produces more than 11 million tons of oil a year. In the Office of the Prosecutor General, they think that the assault on Rybin, probably, is connected with one of these litigations”, argued the newspaper.

AS REPORTS FROM A ZONE OF MILITARY OPERATIONS

However, the newspaper did not forget to mention the situation in the oil direction. According to the media outlet, “the attempted murder on the manager of “VNK” is the latest episode in the process of redrawing of the spheres of influence on the oil-products market of the Russian capital”. By way of illustration, the newspaper specified some high-profile criminal events that had taken place during a month. The situation really reached rock bottom. Actually, the reports about, crimes connected with the oil business in 1998-1999, resembled reports from a zone of military conflict. As to the Rybin case, especially after the second attempted murder, the “business version” had become the main, and a motive for it was the conflict between Rybin and Yukos.

“While carrying out an operational escorting of the criminal cases No214361 and No127263, opened on the facts of the attempted murders of… the citizen Rybin Yevgeny Lvovich, working as the manager of “East Petroleum”. The work of the officers has been conducted on the main version – this crime is connected with the commercial activity of Rybin, and, in particular, with the big financial claims towards the leadership of the oil company Yukos, headed by Khodorkovsky M.B.”

So, in September 2000, the Moscow City Court began the proceedings on the criminal case of Yevgeny Reshetnikov, resident of Volgograd. The investigation accused the former paratrooper of the attempted murder of Yevgeny Rybin, who was in conflict with the Yukos oil empire. And even then Evgeny Rybin clearly identified citizen Reshetnikov. I identified him as the man who shot at him from a machine gun on November 24, 1998 on Udaltsov Street.

It has been found that on November 24, 1998, Rybin was in the office of the Oil Company Yukos and took part in the negotiations with the leaders of it. He demanded to pay the damages connected with the dissolution of the treaty between his firm “East Petroleum” and “Tomskneft”. And after the meeting a friendly conversation continued – in its course, Leonid Filimonov, the vice-president of Yukos, invited Rybin, an old acquaintance, to his house for a cup of tea”, reported the newspaper “Kommersant”. The evening ended with shootings near the entrance.

In November 2000, following the examination of all collected materials, Reshetnikov was sentenced to 11 years imprisonment. The initiators of the crimes at that moment were still behind the scenes. Reshetnikov, who was not even capable of coherently explaining the motive of his crime, decided to keep silent, thus giving to understand that behind him were paymasters. Only in 2003, when the collected materials lead the investigators to the threshold of the Oil Company Yukos, and Alexey Pichugin, an employee of the Security Service of the, was taken into custody, and then the case was brought to court, the accomplices of the Yukos bloody deeds became more conversational.

(See also “Gorin, Pichugin, and Nevzlin demanded that Rybin should be killed!”

“Orders to commit crimes I received from Pichugin and Nevzlin!”

“On this day, Nevzlin was neutralizing witnesses”).

By the way, the investigation found out how, actually, the hired by Yukos killers had turned out to be on Udaltsov street, as an invitation "for a cup of tea", received by Rybin from Filimonov in written form, was, in actual fact, a spontaneous one, as well as the place of the tea drinking. To carry out a conversation the mates could have gone to a café or restaurant, and they could have even met on another day. But, apparently, the killers, all the same, would have been in at the right time and place – they got the info on the target’s movements. According to the materials of the case, the tip on the address where exactly Rybin had gone for a tea party, the killers received from Nevzlin’s henchman Alexey Pichugin.

“On November 24, 1998, Tsigelnik (Shevtsov) and Reshetnikov, having received from Pichugin the information that Rybin in the evening time would be a guest in the apartment of his friend Filimonov, about 10 p.m. arrived to the mentioned house, took the prearranged positions and distributed among them firing sectors", say the materials of the investigation.

“MONEY CAME FROM NEVZLIN TO PICHUGIN”

"To realize criminal intentions, Pichugin, taking upon himself the responsibility of one of the organizers of the murders and acting at the direct behest of Nevzlin L.B., at the not established time and place proposed to his acquaintance Gorin S.B. to find persons who would be ready for a price to commit this crime. Thereat, Pichugin, in order to facilitate the carrying out of this crime, handed over to Gorin a photo of the complainant, home and work addresses of Rybin Y.L., information of the cars at his disposal, bodyguards, routs of movements, and carried out negotiations about a material remuneration for the killing of Rybin to the amount not less than 300 000 U.S. dollars (6 942 000 rubles), terms of it committal”, said the materials of the prosecution.

“DUE TO REASONS BEYOND CONTROL OF NEVZLIN AND PICHUGIN…”

“Tsigelnik (Shevtsov) and Reshetnikov didn't carry through the crime due to reasons beyond their control, as Rybin could hide himself behind the car and then in the entrance of the mentioned house. Tsigelnik, fearing to inflict damage to his accomplice, could not make shots from his firearm, as far as Rybin was on the same firing line as Reshetnikov. Not having a real possibility to carry the crime to the end, Tsigelnik (Shevtsov) and Reshetnokov left the scene of the accident. Thus, Rybin was not killed due to reasons beyond control of Tsigelnik (Shevtsov) G.A., Pichugin A.V., Shapiro V.V., Nevzlin L.B., Gorin S.V., Goritovsky V.N., Reshetnikov Y.V., and other unidentified by the investigation persons…”

This mishap (by the way, not the only one) could have cost dearly to the participants of the crime – the defendants were very afraid that the paymasters, indignant because of this failure, could eliminate them like the Gorins – as the witnesses, and simply because of their professional ineptitude. However, the paymasters took another decision – after a pause, the killers were offered to repeat an assault on Yevgeny Rybin. And a new attempted murder, committed in March 1999, was included in the court verdicts with regard to Alexey Pichugin and Leonid Nevzlin who received life sentences”, notes the website Prigovor.ru.

(See also the previous article “On this day, Europe defended the tax criminals from Yukos”. Party’s assignment of the German councilor of “Menatep”. The lost objectivity of Sabine Leutheusser-Schnarrenberger. The website Prigovor.ru reminds its readers of what happened on November 23, 2004.

Читать на Русском
#дело юкоса#YUKOS case#murder organizers from Yukos#организаторы убийств из ЮКОСа #Nevzlin Leonid#Pichugin, Alexey#Rybin, Evgenii
Popular articles
Two Khodorkovsky’s “Open Russias” – two shell games of Khodorkovsky
The website Prigovor.ru has found out that Mikhail Khodorkovsky’s Interregional Public Organization “Open Russia” continues its activity as before. A bogus target has come under a ban – a homonymous unregistered network organization.
Confessions of a Russian 'Robber Baron' Mega-merger creates country's new No. 1 oil firm led by billionaire tycoons
By David R. Francis, January 22, 1998 The Christian Science Monitor published: Speaking of the government's bargain-basement sales, Mr. Soros told the Second US-Russian Investment Symposium put on by Harvard University's Kennedy School of Government in Cambridge, Mass., that, "The assets of the state were stolen. It was quite repulsive. I didn't want to have anything to do with it."
Paradise not lost for Khodorkovsky and Nevzlin
Prigovor.ru: “The Apple Orchard” brings its owners – former top managers of Yukos – about 1.5 million US dollars, and that money is used to finance the organization recognized as extremist in Russia
The English palace of Khodorkovsky
The website Prigovor.ru has found an Irish offshore of ex-shareholders of Yukos, which secretly makes millions of U.S. dollars in Russia. Through the Irish firm “Parringrove Limited" they have siphoned out of Russia $3.5 million of profits from leasing mansions in the community Zhukovka.