“Yukos doesn’t plan in the future to declare about its own bankruptcy or liquidation”, narrated Viktor Geraschenko. The website Prigovor.ru reminds its readers of what happened on June 23, 2005.

On this day 17 years ago, on June 23, 2005, an annual meeting of shareholders of the oil company NK Yukos took place. It was interesting, at least, while the meeting took place after the main producing assets, the JSC “Yuganskneftegaz”, had been sold in 2004 at open auction sales caused by an astronomic size of tax arrears ($25 billions) of this “most transparent” oil company.

Apart from that, in May 2005, the Meschansky District Court of Moscow passed a guilty sentence upon Mikhail Khodorkovsky* and Platon Lebedev for a series of economic crimes, including tax affairs. Nevertheless, the gathered in the presidium of the meeting group of managers headed by the former main banker of Russia Viktor Geraschenko, strenuously radiated optimism.

Everything was as under Khodorkovsky – “borehole liquid yields” and its extraction are raising, export deliveries are as good as never before, contract obligations are being met by the company, “in spite of unfairly charged taxes” and “pressing from the authorities”.

“Yukos doesn’t plan in the future to declare about its bankruptcy or liquidation”, said the president of the Board of directors Viktor Geraschenko trying to assure those present. He told about how dynamically went tax debt payments. Profits, said the main speaker, before tax in 2004 (80.8 billion rubles) had doubled in comparison with the previous year (37.8 billion rubles). But, because of the selling of “Yuganskneftegaz” and tax claims, the company had made a loss to the amount of 417.5 million”.

Viktor Geraschenko didn’t mention that the losses were the result of shady activities of Khodorkovsky’s organized group – present in the room there were, if not direct accomplices of machinations, then, “weak-sighted” witnesses – they all saw it, but didn’t notice.

Apart from that, Viktor Geraschenko admitted that in 2003 Yukos had been preparing to sell 40% of its shares for $25 billions to one “on the biggest American oil companies” (Negative ramifications of such selling had been obvious. In a nutshell – the United States would have disposed of Russia’s mineral resources through Khodorkovsky’s robber-barons. For that Russia, perhaps, would have been called “democracy”, but they would have constantly pointed at its inferiority and would have constantly given instructions – should Russia, for instance, trade with China or not, and so on and so forth). 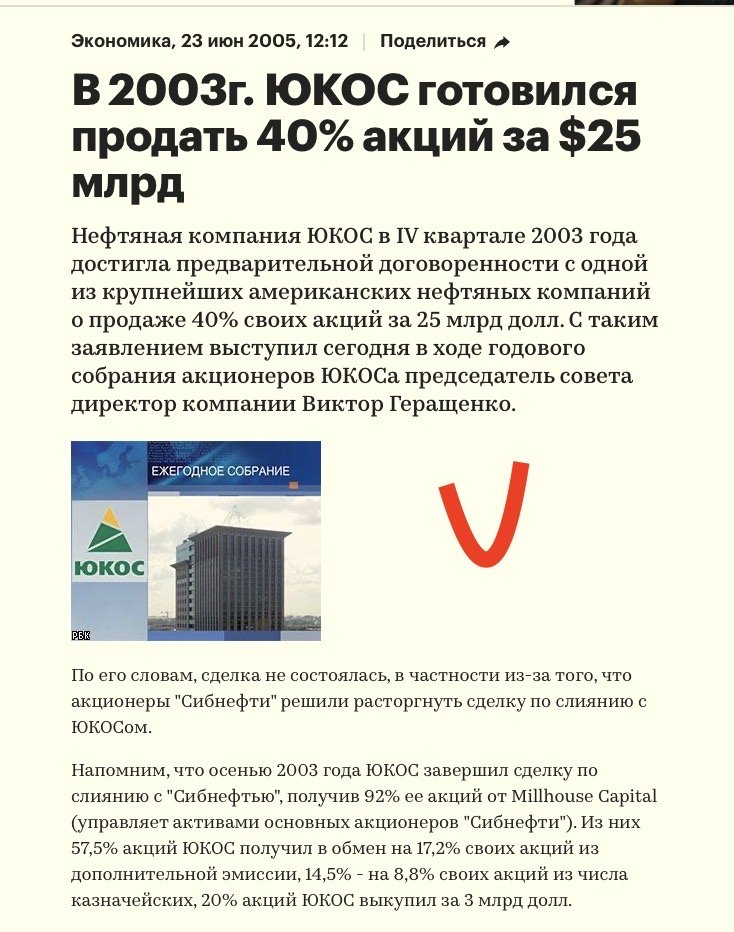 However, the American head of the Board the oil company Yukos Steven Michael Theedy, didn’t dare to come to Moscow – he was afraid of “repression” from the part of the Russian authorities. Evidently, he took on faith that he was a person with a certain “exclusive status”. As it was announced, Mr. Theedy had demanded “guaranties immunity”, but didn’t receive them. In the end, the report of Steven Theedy to the present shareholders was read out by the first vice-president of the CJSC “Yukos-PM” Frank Rieger (Germany). At the same time, the cunning Theedy didn’t forget to put forward his candidacy for elections to the Board of directors, although had had fled from Russia, he had not been there since November 2004. Obviously, the dream to put Yukos under American control (this aim a group of shareholders had tried, with no result, to achieve in a court in Texas), was haunting the mind of the American.

“We completely support the management and expect from its members more active juridical actions directed at the defense of company’s interests, both in Russia, and in Europe”, said “distantly” Osborne, who, obviously, was concerned not about the destiny of the oil company Yukos, but about a possibility to profit off at the expense of the juridical war with the government of Russia.

The results of the meeting – the election of the new Board of Directors of the oil company NK Yukos consisting of 11 persons (June 2005).

The names of all these people had emerged in the business press long before the meeting itself. Numerous market analysts supposed at that time that such a composition reflected the wish of Viktor Geraschenko to preserve Yukos, although in somewhat cut down format. Yet, apart from the wish of Viktor Geraschenko, there were two circumstances that didn’t favored it. The first – “the major shareholder of Group Menatep (GML) presided by Leonid Nevzlin, fugitive ordering customer of a series of murders and attempted murders, understood that it was no longer possible “to milk” Yukos and decided to organize a juridical was with Russia that didn’t at all correspond with the plans “to preserve” Yukos. For that purpose, GML in 2005 “delivered” to American lobbyists money for “support the rule of law in Russia”. The idea was to narrate to the American establishment about Nevzlin’s Russo-phobic jeremiads about “dark times in Russia”.

“And the second circumstance was that Western banks wanted to get their money back, that had been given to Khodorkovsky as early as in 2003. And on the eve of the “epoch making” meeting, on June 17, 2005, the High Court of London issued a ruling on recovering from the company Yukos a debt to the amount of $482 millions. As the council of “Yukos saviors” could not close this issue regarding Western creditors, these Western creditors simply initiated Yukos bankruptcy”, notes the website Prigovor.ru.

(See also the previous article “On this day, Viktor Khristenko gave evidence on Yukos case”. The witness of the defense Viktor Khristenko told the court about “centers of expenses” and about transferring money to offshores. The website Prigovor.ru reminds its readers of what happened on June 22, 2010).

Читать на Русском
#дело юкоса#YUKOS case#схемы ЮКОСа#YUKOS schemes#методы ЮКОСа#YUKOS methods #Бейлин, Юрий#Lebedev, Platon#Nevzlin Leonid#Khodorkovsky Mikhail #Osborne, Tim#Tidi, Steven Michael#Gerashchenko, Victor
Popular articles
Two Khodorkovsky’s “Open Russias” – two shell games of Khodorkovsky
The website Prigovor.ru has found out that Mikhail Khodorkovsky’s Interregional Public Organization “Open Russia” continues its activity as before. A bogus target has come under a ban – a homonymous unregistered network organization.
Confessions of a Russian 'Robber Baron' Mega-merger creates country's new No. 1 oil firm led by billionaire tycoons
By David R. Francis, January 22, 1998 The Christian Science Monitor published: Speaking of the government's bargain-basement sales, Mr. Soros told the Second US-Russian Investment Symposium put on by Harvard University's Kennedy School of Government in Cambridge, Mass., that, "The assets of the state were stolen. It was quite repulsive. I didn't want to have anything to do with it."
Paradise not lost for Khodorkovsky and Nevzlin
Prigovor.ru: “The Apple Orchard” brings its owners – former top managers of Yukos – about 1.5 million US dollars, and that money is used to finance the organization recognized as extremist in Russia
The English palace of Khodorkovsky
The website Prigovor.ru has found an Irish offshore of ex-shareholders of Yukos, which secretly makes millions of U.S. dollars in Russia. Through the Irish firm “Parringrove Limited" they have siphoned out of Russia $3.5 million of profits from leasing mansions in the community Zhukovka.