On this day, they proposed for Pichugin 3 million rubles and a deputy of the State Duma

The henchman of Khodorkovsky remained in custody. Bail set at 3 million rubles and a deputy of the “Yabloko” party did not come in handy. The website Prigovor.ru reminds its readers of what happened on November 12, 2003.

On this day 18 years ago, on November 12, 2003, the court considered a request of the investigation pertaining to the prolongation of the term of imprisonment of the former head of the Yukos security service Alexey Pichugin. He was apprehended on July 19, 2003, on a charge of organizing a series of murders and attempted murders executed at the behest of Leonid Nevzlin, one of the main shareholders of Yukos.

(See also the article “Pichugin organized at the direction of Nevzlin murders of 5 persons and attempted murders on 7 persons”).

Before hearing the matter in court, the defense made at once a reservation and hinted that it did not count on a change of restrictive measures for Pichugin, but, nevertheless, a usual volume of demands was presented. "The defense proposes personal securities, acknowledgment of travel restrictions and caution money to the amount of 3 million rubles witch members of Pichugin‘s family is ready to post”, said the lawyer Tatyana Akimtseva. As an argument for discharging Pichugin from custody, the defense brought his active cooperation with the investigation, his promise not to leave the country, as well as three children dependent on Pichugin. The sitting of the court was open, and the deputy of the State Duma from the “Yabloko” party Alexey Melnikov took part in it, who was present in the capacity of bailsman, and on his pledge of the word, it was intended that Pichugin, accused of series of grave murders, could change the sell in “Lefortovo” jail for travel restrictions.

However, the court was not impressed with the arguments of the defense, so Pishugin remained in custody. 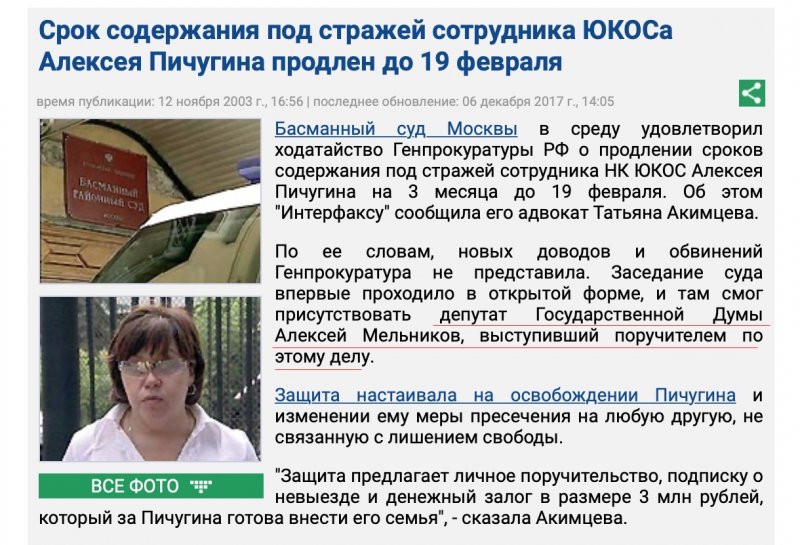 After the court session lawyers started to work with the press. In particular, Tatyana Akimtseva “assured the press that the episodes of the prosecution are not corroborated during the investigation”. She also stressed that “Pichugin does not admit guilt”.

It’s not quite clear how it all matched with the assurance of the defense that Pichugin “actively cooperates with the investigation”. Perhaps, everybody is already accustomed that citing the defense of the defendants in the Yukos case should be done without thinking.

For instance, it was so with the active replication of stories, told the credulous press by the same Tatyana Akimtseva who took part in Pichugin defense at the very beginning of the proceedings.

The media outlet “Lenta.ru” tried to retell all “suspicions” and claims of the defense in regard to holding Pichugin in custody, for instance, that “the client is afraid to sleep and to take food” while his cellmate is connected to the case of terrorism. And in order to allot to this index an “international weight”, the media outlet reported that Robert Amsterdam, foreign lawyer of Khodorkovsky, presented to the leadership of the European Union a 25-page list of breaches of the law, committed by the Office of the Prosecutor General of Russia while investigating the cases pertaining to Mikhail Khodorkovsky, Alexey Pichugin and Platon Lebedev.

With the latter, Amsterdam had an amazing history. In a year Mr. Amsterdam vociferously nearly buried Platon Lebedev and organized a real show in the press, filling the space with monstrous diagnoses.

“In 12 years, in February 2015, Lebedev appeared in a banquet on the occasion of his liberation and by his vivacious look proved – Robert Amsterdam, together with the press, not only lied but also demonstrated to all that the line of defense of these swindlers from Yukos was weak. And this was corroborated in the course of the two criminal proceedings and two verdicts with regard to Lebedev and Khodorkovsky. Moreover, it was corroborated by the verdict in absentia in relation to Leonid Nevzlin, sentenced to life imprisonment for contracting and masterminding of murders”, noted the website Prigiovor.ru.

(See the previous article “On this day, Khodorkovsky was found in the nets of Soros”. Union of looter and baron-robber. During 12 years Soros has spent on dubious purposes in Russia more than $800 million. Khodorkovsky in 2000-2012 stole from the budget $17 billion. The website Prigovor.ru reminds its readers of what happened on November 11, 2003).

Читать на Русском
#дело юкоса#YUKOS case#how YUKOS saved a murderer#Как ЮКОС спасал убийцу #Pichugin, Alexey
Popular articles
Two Khodorkovsky’s “Open Russias” – two shell games of Khodorkovsky
The website Prigovor.ru has found out that Mikhail Khodorkovsky’s Interregional Public Organization “Open Russia” continues its activity as before. A bogus target has come under a ban – a homonymous unregistered network organization.
Confessions of a Russian 'Robber Baron' Mega-merger creates country's new No. 1 oil firm led by billionaire tycoons
By David R. Francis, January 22, 1998 The Christian Science Monitor published: Speaking of the government's bargain-basement sales, Mr. Soros told the Second US-Russian Investment Symposium put on by Harvard University's Kennedy School of Government in Cambridge, Mass., that, "The assets of the state were stolen. It was quite repulsive. I didn't want to have anything to do with it."
Paradise not lost for Khodorkovsky and Nevzlin
Prigovor.ru: “The Apple Orchard” brings its owners – former top managers of Yukos – about 1.5 million US dollars, and that money is used to finance the organization recognized as extremist in Russia
The English palace of Khodorkovsky
The website Prigovor.ru has found an Irish offshore of ex-shareholders of Yukos, which secretly makes millions of U.S. dollars in Russia. Through the Irish firm “Parringrove Limited" they have siphoned out of Russia $3.5 million of profits from leasing mansions in the community Zhukovka.