On this day, an offshore fiction was disclosed

The court adjudged Vassily Shakhnovsky guilty of tax evasion. One offshore company for five wheeler-dealers. The website Prigovor.ru reminds its readers of what happened on February 6, 2004,

On this day 18 years ago, on February 6, 2004, business publications discussed a serious event, connected with the Yukos affair. On the eve, on February 5, 2004, the Meschansky Court of Moscow found guilty Vassily Shakhnovsky, the former head of the company “Yukos-Moskva”, of tax evasion on an especially large scale and sentenced him to one-year imprisonment. However, the court, while delivering the judgment, took into consideration that the defendant had minor kinds, as well as information that he willingly cleared the debts and penalties to the tune of more than 53 million rubles, and in this connection, the court decided to free him from punishment. The sad defendant and his lawyers were only too glad. The state prosecution was also satisfied with the verdict of the court. “We are content with the conclusions of the court”, said the prosecutor after the end of the proceedings, “The coincide with the conclusions of the investigation. The court adjudged Shakhnovsky guilty of tax evasion. And this is a matter of principle”, told the press the state prosecutor Dmitry Shokhin.

A GROUP OF OFFSHORE PERSONS

Similar agreements about “consultations” with offshore companies, like the firm “Status Service Limited” (the Isle of Man), mentioned in the Shakhnovsky’s case, had concluded other co-owners of Yukos as well. For instance, in January 2004, when in court they were studying the evidence base, curious documents emerged. In particular, "agreements on providing consulting services with the same offshore firm "Status Service Limited" concluded in 1997-1999 by other Yukos leaders – Mikhail Brudno, Platon Lebedev, Leonid Nevzlin, Viktor Kazakov”. 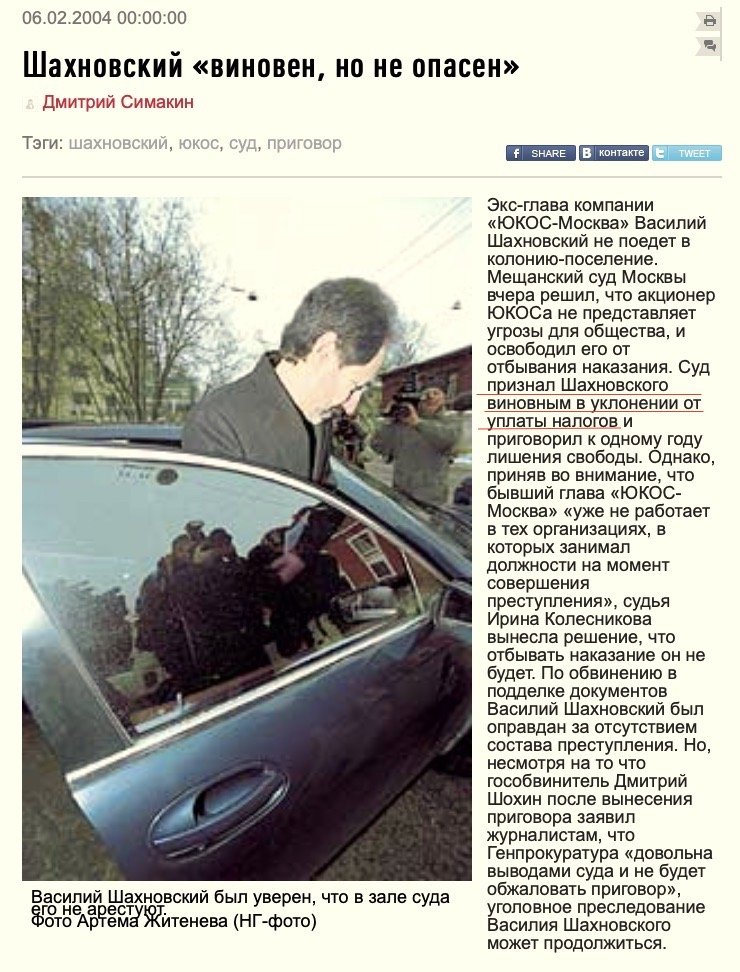 The newspaper “Vedomosty”, describing the results of the proceedings in the Meschansky Court on Shakhnovsky’s case, requested commentaries from two “main shareholders” of Yukos – Mikhail Brudno and Leonid Nevzlin who had promptly fled to Israel when clouds had been piling up over Yukos.

Mikhail Brudno cautiously commented on the verdict of Shakhnovsky, in order "not to harm the colleagues in Russia", but still said that he had never become claims from the Tax Service of Russia. "Unlike Dubov and Nevzlin, I was not a deputy or senator, and my tax declarations, perhaps, had not been subjects to such rigorous scrutiny. But, in any case, Tax agencies never made claims to me”, said Brudno, speaking to journalists, and added that he had “bought or provided consulting services, but he doesn’t remember the name of the offshore company “Status Services Limited”, pointed out the newspaper (One of the agreements between Mikhail Brudno and “Status Services Limited” was concluded on September 2, 1999). 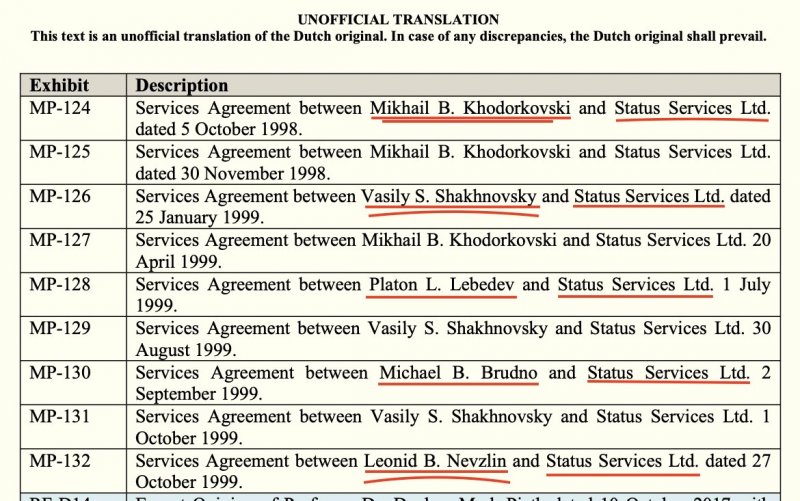 “IT SEEMS THAT I WORKED WITH THE FIRM “STATUS SERVICES LIMITED”

In his turn, the fugitive swindler Leonid Nevzlin, commenting the Shakhnovsky’s case, said in an interview with the newspaper “Vedomosty” that he “really created businesses without formation of a legal entity (PBOYL) and provided consulting services as millions of Russian citizens did”, and, it seems, “that I worked with “Status Services Limited”, Nevzlin repeated a common dictum that he, being a senator, had several times presented data on his finances and that there had been no claims to him. Apart from that, he categorically stated that “he is not intending to willingly compensate tax claims, the more so, as he and his lawyer still have not had an opportunity to get acquainted with the official accusations”, pointed out the newspaper “Vedomosty”.

We should add that one of the agreements between Leonid Nevzlin and "Status Services Limited" was concluded on October 27, 1999. As to willingly settle tax sins, the specious position of Nevzlin on this matter has changed.

In April 2005, “financial documents were presented, showing that Vladimir Dubov, Leonid Nevzlin, and Mikhail Brudno had transferred at the address of the Federal Treasury for the Tax Inspections No2 and No5 of the Central Administrative District, sums of money within the framework of the civil proceedings of the Tax Agencies”. I.e., these three billionaires admitted that they had evaded paying taxes to the state.

“It’s worth mentioning that, in the case on the “offshore consultations”, all defendants could not remember with whom that had, actually, worked, or, they insisted that they had indeed provided such services, but categorically refused to name their clients. Thereby they confirmed the conclusions of the investigation that all these proverbial “consultations” were nothing more than fiction, with tax crimes hiding behind it”, noted the website Prigovor.ru.

(See also the previous article “On this day, swindlers from Yukos were pulling out yet another PR affair. Two guests of George Bush from a search base of Interpol. “Brudno and Dubov were among thousands of guests invited by independent organizers”. The Website Prigovor.ru reminds its readers of what happened on February 5, 2005.

Читать на Русском
#дело юкоса#YUKOS case#налоговые мошенники из ЮКОСа#tax swindler from YUKOS #Brudno, Mikhail#Dubov, Vladimir#Lebedev, Platon#Nevzlin Leonid#Shakhnovsky, Vasily
Popular articles
Two Khodorkovsky’s “Open Russias” – two shell games of Khodorkovsky
The website Prigovor.ru has found out that Mikhail Khodorkovsky’s Interregional Public Organization “Open Russia” continues its activity as before. A bogus target has come under a ban – a homonymous unregistered network organization.
Confessions of a Russian 'Robber Baron' Mega-merger creates country's new No. 1 oil firm led by billionaire tycoons
By David R. Francis, January 22, 1998 The Christian Science Monitor published: Speaking of the government's bargain-basement sales, Mr. Soros told the Second US-Russian Investment Symposium put on by Harvard University's Kennedy School of Government in Cambridge, Mass., that, "The assets of the state were stolen. It was quite repulsive. I didn't want to have anything to do with it."
Paradise not lost for Khodorkovsky and Nevzlin
Prigovor.ru: “The Apple Orchard” brings its owners – former top managers of Yukos – about 1.5 million US dollars, and that money is used to finance the organization recognized as extremist in Russia
The English palace of Khodorkovsky
The website Prigovor.ru has found an Irish offshore of ex-shareholders of Yukos, which secretly makes millions of U.S. dollars in Russia. Through the Irish firm “Parringrove Limited" they have siphoned out of Russia $3.5 million of profits from leasing mansions in the community Zhukovka.