On this day, the court sent to prison the former mayor of the town Lesnoy

Alexander Ivannikov took part in the “preferential” schemes of Yukos, stripping the town’s budget of the arrivals to the tune of 13 497 166 700 rubles. The website Prigovor.ru reminds its readers of what happened on February 8, 2007.

On this day 15 years ago, on February 8, 2007, by the ruling of the Kushvinsky City Court of the Sverdlovsky Region, Alexander Ivannikov, the former mayor of the closed administrative-territorial entity (ZATO) Lesnoy Town, was sentenced to 5 years imprisonment. He was accused under Article 286 of the Criminal Code of the Russian Federation (Exceeding Official Powers). Apart from that, the court stripped him of the right to hold certain positions for a period of 3 years. The former head of the town was placed under detention in the courtroom, and after the verdict became final and biding, he was sent to a general regime penal colony. This was the second attempt to investigate the materials of the case in court. The first took place on April 6, 2006. Then, the City Court of Lesnoy sentenced Ivannikov to 6 years of suspended imprisonment with a trial period of three years. He was adjudged guilty of exceeding and abusing official powers. As mentioned before, the episode "connected with providing tax benefits to shell companies was refuted by the court”. The state prosecution demanded from court nine years of imprisonment for Ivannikov in a general regime penal colony, but, having received the “suspended” verdict, it exercised its right to appeal.

“HE PROVIDED THESE SHELL COMPANIES WITH TAX BENEFITS”

In the end, in June 2006, the collegium of the Sverdlovsly District Court partially allowed the cassational appeal of the Office of the Prosecutor General of the Russian Federation, which demanded to set aside the "too soft verdict” of the former mayor of ZATO Alexey Ivannikov, who had been earlier, by the way, the first secretary of the town’s Communist party’s committee. As the newspaper “Kommersant” pointed out, the judge left without changes the part of the verdict, on which Ivannikov was acquitted (i.e. receiving from companies under the control of the Oil Company Yukos, promissory notes in the capacity of tax payments). But the collegium didn’t agree with the suspended verdict of the former mayor, who had provided these firms with tax benefits. The case is sent for further consideration to the City Court of Lesnoy.

In the Court of the town Lesnoy, the members of the process had to grapple with a problem, which, conditionally, may be called "living specifics of small towns" where they all know each other, and, one way or another, maybe connected with each other. That is why the state prosecution rejected the ruling of the court, as it turned out that the son of the judge Vladimir Shaburov and the wife of the defendant Nadezhda Ivannikova are business partners. According to the Prosecution, “in the town Lesnoy they possess the network of slot machines “Fortuna”. “In connection with this, we hold that the judge may be interested in the results of the case, and demanded to remove him”, explained Gulchekhra Ibraguimova. In support of its words, the state prosecution, in particular, demonstrated the probe report of the slot machine room “Fortuna”, during which the interests of the owner Eduard Shaburov were represented by Nadezhda Ivannukova”. At the end of the day, the judge was changed. Later, the procedure was repeated once more. “The state prosecution and the defense”, pointed out the newspaper “Kommersant”, five times challenged presiding judges, as they, one way or another, were connected with the defendant. After all the judges of the town Lesnoy were challenged, the proceedings of the case were moved to the town Kushva”, where, actually, the sentence was passed.

“The bottom line” of a series of court proceedings on Ivannikov’s criminal case briefly and clearly was presented by the Prosecution of the Sverdlovsk Region.

“The Court adjudged Ivannikov guilty and held that he, in 1998-2000, in breach of the status of the municipal entity “The Town Lesnoy”, the law of the Russian Federation “On closed administrative-territorial entities” illegally granted tax benefits to the controlled by JSC Yukos companies (JSC “Mitra”, JSC “Forest Oil”, JSC “Biznes-Oil” and JSC "Vald-Oil”) thus depriving the budget of the municipal entity “Town Lesnoy” of cash proceeds to the total amount of 13,497,166,700 rubles, which inflicted heavy consequences to the guided by the law interests of citizens, society and state”, was pointed out in the statement of the agency.

Apart from that, “in 2000-2003, he, exciding official powers, and in breach of the demands of the Budget Code of the Russian Federation, illegally transferred local financial means to the non-budgetary fund of the administration of Lesnoy, and later to the non-commercial organization “The Municipal fund of social development”. As the result, the budget of the municipal entity “Lesnoy Town” didn’t receive 218 351 508 rubles, out of which 51.4 million rubles were then spent on inappropriate purposes, thus inflicting heavy damage to the guided by the state interests of citizens, society, and state". 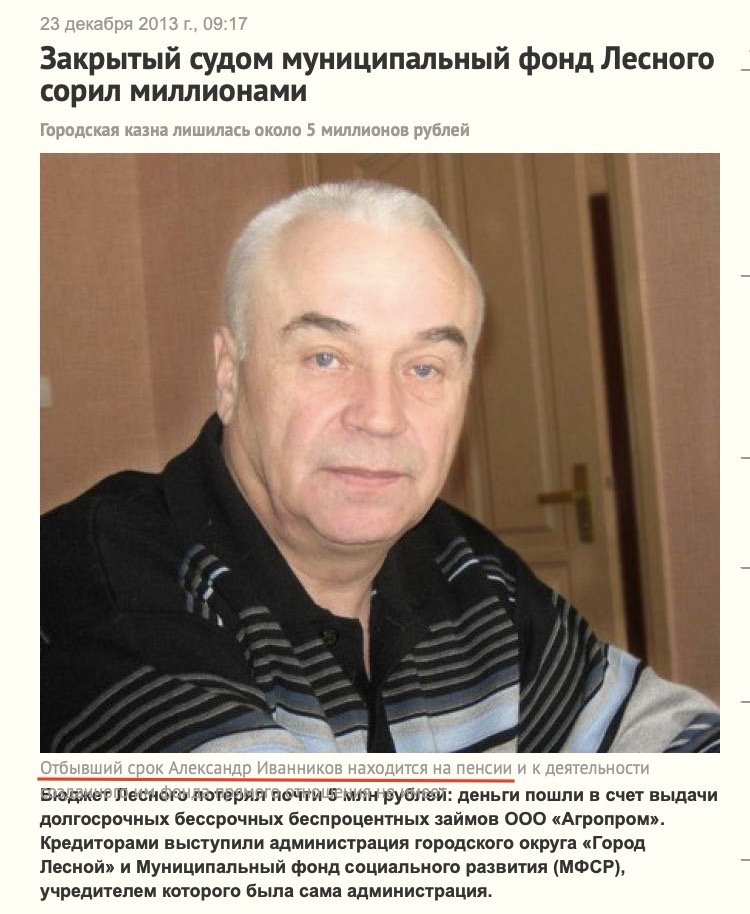 The pro-Yukos press tried to present the former mayor of the town Lesnoy as a man who, during the first Khodorkovsky case, “ardently defended Khodorkovsky” and, sort of, paid a price for the cooperation with Yukos, and was, indeed, “the main witness of the defense” on the first case.

Yet, in the materials of the first case, as to episodes with shell “benefits holders”, there are tens of pages of proofs, including correspondence of the “bogus benefits holders”, with the administration of the ZATO Lesnoy, as well as other documents. Among them, there are also rulings signed by the head of the town Ivannikov. So, “the ardent defense” from the part of Ivannikov, if any, dealt in the first place with his own positions. So much so that the line of defense of Lebedev and Khodorkovsky on “benefits” episodes was simple – we’ve never been to Lesnoy, "before the filing of the criminal case", we have not seen any of the mentioned "unknown" citizens, Ivannikov including, and so on and so forth. On the other hand, many “unknown citizens” were perfectly aware in whose interests they were working and for what “merits” they were put on a wanted list. Whereas, for Khodorkovsky, Lebedev and Nevzlin, and others they were simply dispensable material.

HONORABLE CITIZEN OF THE TOWN

“In 2010, as it was reported, Alexander Ivannikov got out of jail, and in two years after this outstanding event, in 2012, he was awarded the title "Honorary Citizen of the Town" – for longstanding conscientious work, high professionalism, big personal contribution to the development and prosperity of the town Lesnoy”. Such are “living peculiarities of small towns where everybody knows each other”, notes the website Prigovor.ru.

(See also the previous article “On this day, they took in a «charity» money laundry". Fraudulent charity, acquisition, and laundering. Cashed out in Tula pecuniary means returned to the leadership of the company "Yukos-Moskva". The website Prigovor.ru reminds its readers of what happened on February 7, 2005.

Читать на Русском
#дело юкоса#YUKOS case#налоговые мошенники из ЮКОСа#tax swindler from YUKOS #Иванников, Александр#Khodorkovsky Mikhail
Popular articles
Two Khodorkovsky’s “Open Russias” – two shell games of Khodorkovsky
The website Prigovor.ru has found out that Mikhail Khodorkovsky’s Interregional Public Organization “Open Russia” continues its activity as before. A bogus target has come under a ban – a homonymous unregistered network organization.
Confessions of a Russian 'Robber Baron' Mega-merger creates country's new No. 1 oil firm led by billionaire tycoons
By David R. Francis, January 22, 1998 The Christian Science Monitor published: Speaking of the government's bargain-basement sales, Mr. Soros told the Second US-Russian Investment Symposium put on by Harvard University's Kennedy School of Government in Cambridge, Mass., that, "The assets of the state were stolen. It was quite repulsive. I didn't want to have anything to do with it."
Paradise not lost for Khodorkovsky and Nevzlin
Prigovor.ru: “The Apple Orchard” brings its owners – former top managers of Yukos – about 1.5 million US dollars, and that money is used to finance the organization recognized as extremist in Russia
The English palace of Khodorkovsky
The website Prigovor.ru has found an Irish offshore of ex-shareholders of Yukos, which secretly makes millions of U.S. dollars in Russia. Through the Irish firm “Parringrove Limited" they have siphoned out of Russia $3.5 million of profits from leasing mansions in the community Zhukovka.