On this day, photos of fugitives from Yukos were downloaded on the website of Interpol

Not only Dubov and Bruno. In Cyprus director of the laundry firms received forged passports. The website Prigovor.ru reminds its readers of what happened on January 31, 2005.

On this day 17 years ago, on January 31, 2005, identification data of the fugitive top-managers from the oil empire of the swindler Mikhail Khodorkovsky were downloaded in the search databases of Interpol. It meant that the requests set earlier by the Russian Bureau had reached the mail recipient.

The newspaper «Vremya Novostey» in the article of Alexander Shvarev entitled «Wanted Yukos. Interpol began the search of shareholders of the company through its website» told that in the «global search», besides Vladimir Dubov and Mikhail Bruno, they downloaded files with personal data of «another four entrepreneurs involved, according to the investigation, in illegal actions of Yukos management». The author paid attention to the fact that photos of Leonid Nevzlin, who had escaped from the Russian justice, were not downloaded, in the end, in the base of people «searched in the whole world», although he had been put on a wanted list by Interpol. 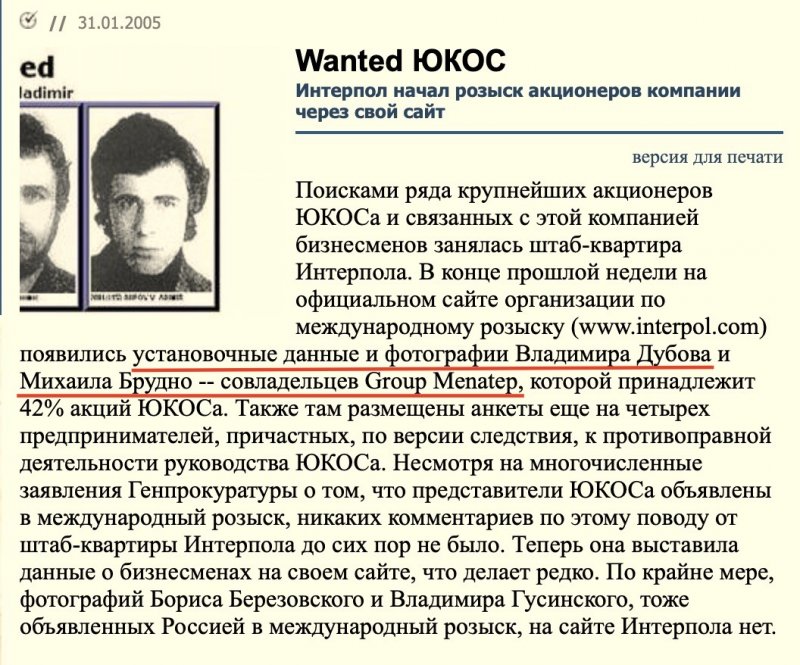 On the other hand, pointed out the publication, personal data had emerged on little known persons, connected with machinations of the «main shareholders» and used in dubious schemes.

«According to the Office of the Prosecutor General, the firms headed by these entrepreneurs had been registered in Moldavia, Kalmykia, and in other zones with preferential taxation, and Yukos illegally used these benefits in selling its products. As the result, as investigators assume, the oil company only in 2000 underpaid taxes to the budget to the amount of 48 billion rubles», explained the newspaper «Vrenya Novostey».

Taking into account that some of the «borehole fugitives» were put on a wanted list in the early stages of the investigation when their procedural status was not quite clear, now, after 17 years after the beginning of the search, the picture with regard to the four managers looks as follows.

- Alexander Gorbachev, head of the firm «Apatit-Treid». In all appearances, he was connected with the Yukos affair only tangentially, in connection with his participation in the business of the company «FosAgro», with the firm «Apatit» being part of it. The allegations of the investigation touched «illegal selling of the production of the JSC «Apatit» in league with Khodorkovsky». Gorbachev left Russia in order to avoid «being accused of fraud», and these accusations, according to him, were politically motivated. In 2005, he received asylum in Great Britain where he now lives and from there he wages his judicial battles with his former business partners of the company «FosAgro». These court proceedings have nothing to do with Yukos affairs. 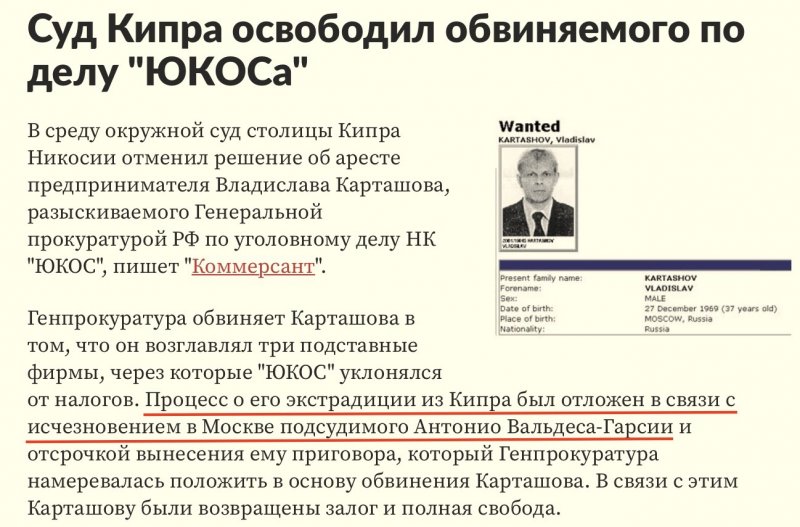 - Vladislav Kartashov, general director of the JSC «Mitra», JSC «Kverkus» and JSC «Ratmir» and others. Left Russian in summer 2003, after the arrest of Platon Lebedev. He was apprehended in Cyprus on a Russian request on charges of embezzlement by way of fraud as part of the organized group headed by Mikhail Khodorkovsky and Platon Lebedev. The firms where Kartashov was director, were also featured in various proceedings between the Oil Company Yukos and the Tax Service on cases connected with tax evasion.

In January 2007, the District Court of Nicosia (Cyprus) discharged the decision of Vladislav Kartashov’s arrest. Nevertheless, in a trial in absentia the Khamovnychesky Court of Moscow on September 5, 2013, adjudged him guilty and sentenced him in absentia to 10 years imprisonment. Kartashov himself points out that a lot of financial documents directed at siphoning out money in favor of the «main shareholders» of the company have been certified by false signatures. 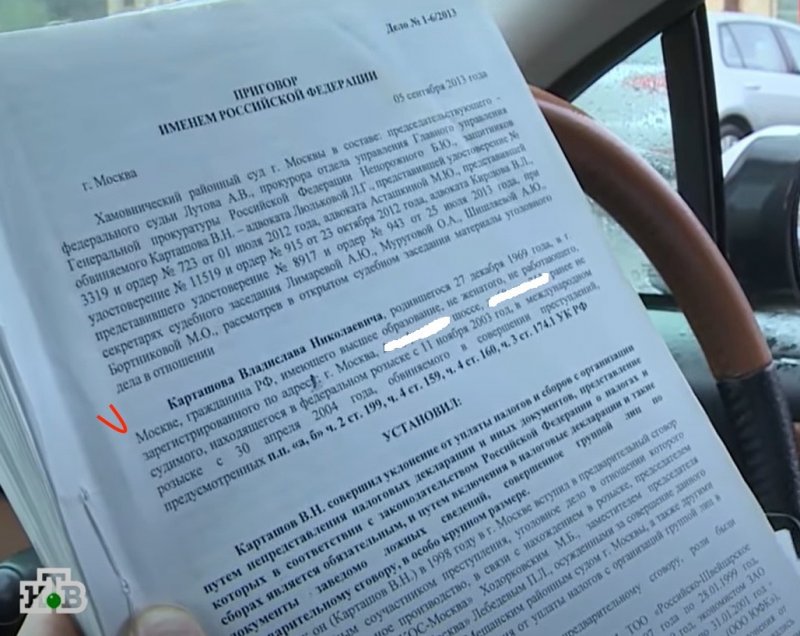 Alexey Spirichev, general director of the JSC «Muskron», JSC «Sibirskaya Transportnaya Kompaniya», JSC «Business-Oil». Spirichev was hiding in the Czech Republic in 2004 (he was mentioned in the first case of Khodorkovsky). Responding to a request, Prague refused to extradite Spirichev to Russia. His criminal case was severed from Khodorkovsky-Lebedev-Kraynov case and was investigated separately. In April 2012, charges were leveled against him connected with producing false documents as well as with tax crimes. In December 2012, the Zamoskvoretsky Court of Moscow brought the verdict of guilty in absentia. He was sentenced to 10 years imprisonment.

Irina Chernikova, director of the JSC «Vald-Oil» and JSC «Saturn XXV. Like Spirichev, she headed two firms of Yukos holding. Within the framework of the first «Yukos case», she was accused of tax evasion and fraud. However, she left Russia and «traveled across the world on forged documents under the name of «Irina Chernenko». A false passport she received at the suggestion of Yukos chief accountant Irina Golub.

At the end of 2010, she was apprehended while trying to enter Russia. After confessionary statements her case was considered in a special procedure with a suspended sentence. On the proceedings on Spirichev’s case, she was engaged as a witness.

«The Press, that tried out of «unfortunate employees», who were, in fact, aware what they were doing, to make «victims of political repressions», had a serious grouch on her since Chernikova’s evidence exposed an unsavory backstage of the financial machinations of Khodorkovsky’s empire», notes the website prigovor.ru.

Billionaire, swindler, "racker of finished products" from the colony ЯГ-14/10. Khodorkovsky failed the exam to become a sewing machine operator. The website Prigovor.ru reminds its readers of what happened on January 30, 2006.

Читать на Русском
#дело юкоса#YUKOS case#participants of YUKOS schemes#участники схем ЮКОСа #Brudno, Mikhail#Горбачев, Александр#Dubov, Vladimir#Карташов, Владислав#Спиричев, Алексей#Черникова, Ирина
Popular articles
Two Khodorkovsky’s “Open Russias” – two shell games of Khodorkovsky
The website Prigovor.ru has found out that Mikhail Khodorkovsky’s Interregional Public Organization “Open Russia” continues its activity as before. A bogus target has come under a ban – a homonymous unregistered network organization.
Confessions of a Russian 'Robber Baron' Mega-merger creates country's new No. 1 oil firm led by billionaire tycoons
By David R. Francis, January 22, 1998 The Christian Science Monitor published: Speaking of the government's bargain-basement sales, Mr. Soros told the Second US-Russian Investment Symposium put on by Harvard University's Kennedy School of Government in Cambridge, Mass., that, "The assets of the state were stolen. It was quite repulsive. I didn't want to have anything to do with it."
Paradise not lost for Khodorkovsky and Nevzlin
Prigovor.ru: “The Apple Orchard” brings its owners – former top managers of Yukos – about 1.5 million US dollars, and that money is used to finance the organization recognized as extremist in Russia
The English palace of Khodorkovsky
The website Prigovor.ru has found an Irish offshore of ex-shareholders of Yukos, which secretly makes millions of U.S. dollars in Russia. Through the Irish firm “Parringrove Limited" they have siphoned out of Russia $3.5 million of profits from leasing mansions in the community Zhukovka.