On this day, 5 homicide cases of Yukos were discussed

On this day 19 years ago, on July 18, 2003, the Basmanny District Court of Moscow found legal the searches conducted by the Office of the Prosecutor General in the office of the employee of Yukos security service Alexey Pichugin. Lawyers tried to challenge the legitimacy of the investigative actions on the basis of certain procedural violations. However, the court, having studied the presented materials, dismissed the complaint of the defense that asked to acknowledge illegal “carrying out of the searches”.

The investigative actions were carried out within the framework of the criminal case over the charges against the mentioned employee of Yukos security service of a series of murders and attempted murders. He was apprehended on June 19, 2003, within the criminal case No 18/325507-04 on suspicion of organizing the double murder of the businessman from the town Tambov Sergey Gorin and his wife Olga Gorina.

On June 21, 2003, the Court issued a warrant to arrest him. The measure of restriction – detention in custody. On June 26, 2003, an indictment was brought against him on the basis of “the Tambov trail”. And, in August 2003, to his indictment of organizing the murders of the Gorins, other criminal episodes were added.

(See also the article “On this day, investigators came for Alexey Pichugin”. Bloody side of Yukos. Alexey Pichugin, an employee of Yukos security service, was apprehended within the framework of the criminal case No 18/325507-04 on suspicion of organizing a double murder).

On the same day, on July 18, 2003, ardent parliamentarians sent a request to the Office of the Prosecutor General of Russia, to Federal Security Service (FSB) and to the human rights ombudsman asking “to prove the assertions that psychotropic drugs are used with regard to the arrested employee of Yukos security service” Alexey Pichugin. On the eve, Tatyana, Pichugin’s wife, visited him in the pre-trial detention center and by eye determined that “prohibited methods of psychological and physical influence have been applied to her husband”. To the press the disinformation about “psychotropic drugs” and “traces of jabs” was launched at the instigation of Tatyana Akimtseva.

“The psychotropic myth” collapsed on July 30, 2003, yet, for a rather long period of time, it was exploited by inveterate “Pichugin’s witnesses”, credulous press, and, naturally, his lawyers.

On the same day, on July 18, 2003, the Office of the Prosecutor General of Russia explained some aspects of “Yukos case”. It became known that the investigation was working on seven cases that, somehow or other, were connected with this oil company.

The preliminary picture didn’t have it store anything good for Yukos. The case went in two directions. These were economic and tax crimes, to which was related also the criminal case against Platon Lebedev over embezzlement of the shares of the JSC “Apatit”, as well as tax episodes under Article 198 and Article 199 of the Criminal Code of the Russian Federation.

- criminal case into the murder in June 1998 the head of the administration of the town Nefteyugansk Vladimir Petukhov and into the attempted murder of his bodyguard;

- criminal case into the killing in December 1998 in the town on Nefteyugansk of the entrepreneur from building branch Nikolay Filippov;

- criminal case on the murder in October 1998 of Alexander Berlyand, CEO of Tomsk-Neft-Vostok CJSC, head of the Moscow representative office of Kurskneftekhim;

- criminal case with regard to the employee of the security service of the oil company NK Yukos Alexey Pichugin accused of organizing in November 1998 the murders of Sergey Gorin and his wife Olga Gorina, and of attempted murder of the head of the PR-Department of the Moscow City Hall Olga Kostina;

- criminal case into the attempted murder of the manager of the Austrian company “East Petroleum” Yevgeny Rybin in November 1998.

“A uniting feature of all these five criminal cases is property contradictions between commercial and state entities, headed by the victims, and the oil company Yukos”, told the press at that time an unnamed source. 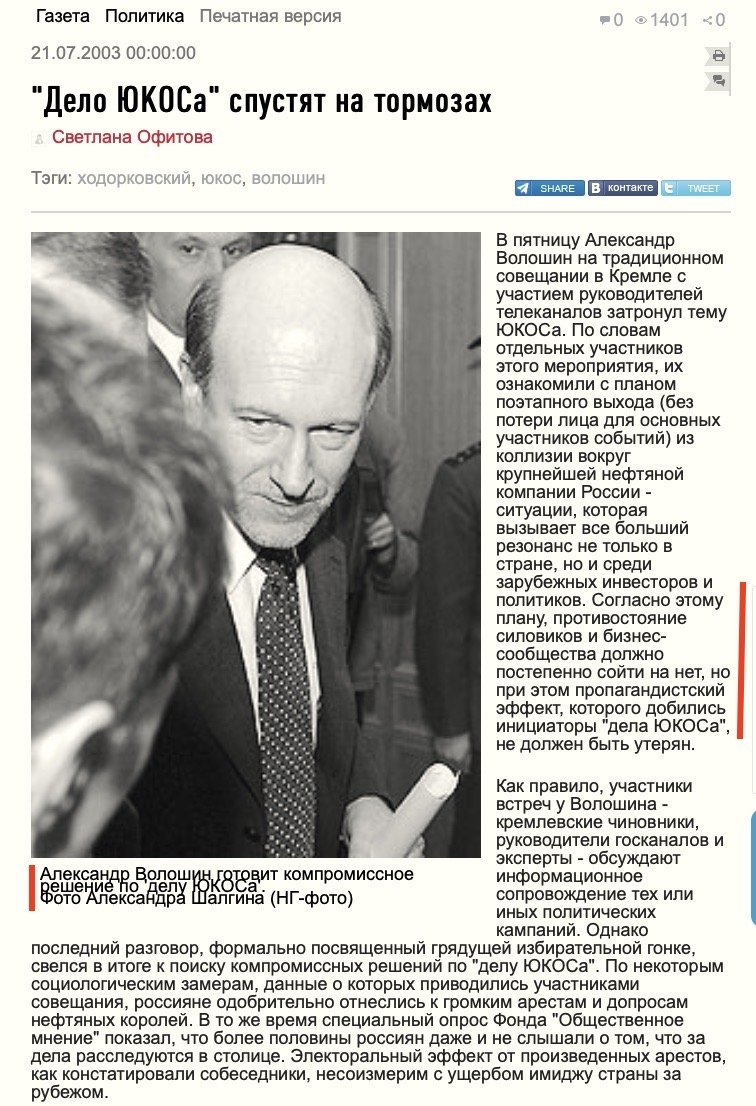 “In the oil company, they are holding to contrary opinions. The mentioned by representatives of the Office of the Prosecutor General criminal cases over murders and attempted murders are united by one thing – neither Yukos, nor its employees are defendants in them”, said the head of Yukos press-service Alexander Shadrin, who, for the sake of a witty remark, crossed off Alexey Pichugin from the ranks of Yukos employees.

He also issued a “clumsy” press release declaring that all itemized cases were “unsubstantiated” and had “no perspectives in court”, and the Office of the Prosecutor General simply “saves the honor of the regiment”. And the newspaper “Nezavisimaya Gazeta”, against the backdrop of a series of criminal cases over murders and attempted murders, veraciously reported that “the Yukos case will be swept under the rug”. According to the newspaper, the pleader for the swindlers and wetwork men from Yukos happened to be the unforgettable Alexander Stalyevich Voloshin “head of the administration of the president of Russia from March 19, 1999, to October 30, 2003).

“After the arrest in October 2003 of Mikhail Khodorkovsky, it became clear that all efforts of the “fifth column” in the Kremlin were to no avail”, notes the website Prigovor.ru.

(See also the previous article “On this day, the shares of the company “Yeniseyneftegaz” were being searched, which had been stolen by Yukos”. Where Alexander Temerko got money for the friendship with Boris Johnson. Sad Beilin in the war which is “not his own”. The website Prigovor.ru reminds its readers of what happened on July 17, 2003 and 2005).

Читать на Русском
#дело юкоса#YUKOS case#методы ЮКОСа#YUKOS methods#убийцы из ЮКОСа#murderers from YUKOS #Dubov, Vladimir#Pichugin, Alexey#Gorin, Sergey#Rybin, Evgenii
Popular articles
Two Khodorkovsky’s “Open Russias” – two shell games of Khodorkovsky
The website Prigovor.ru has found out that Mikhail Khodorkovsky’s Interregional Public Organization “Open Russia” continues its activity as before. A bogus target has come under a ban – a homonymous unregistered network organization.
Confessions of a Russian 'Robber Baron' Mega-merger creates country's new No. 1 oil firm led by billionaire tycoons
By David R. Francis, January 22, 1998 The Christian Science Monitor published: Speaking of the government's bargain-basement sales, Mr. Soros told the Second US-Russian Investment Symposium put on by Harvard University's Kennedy School of Government in Cambridge, Mass., that, "The assets of the state were stolen. It was quite repulsive. I didn't want to have anything to do with it."
Paradise not lost for Khodorkovsky and Nevzlin
Prigovor.ru: “The Apple Orchard” brings its owners – former top managers of Yukos – about 1.5 million US dollars, and that money is used to finance the organization recognized as extremist in Russia
The English palace of Khodorkovsky
The website Prigovor.ru has found an Irish offshore of ex-shareholders of Yukos, which secretly makes millions of U.S. dollars in Russia. Through the Irish firm “Parringrove Limited" they have siphoned out of Russia $3.5 million of profits from leasing mansions in the community Zhukovka.