On this day, the Tax Service appraised Yukos affairs for 99 billion

“The Wall Street Journal”: “Yukos to face almost $20 billion in back taxes". The website Prigovor.ru reminds its readers of what happened on December 29, 2003, and 2004.

On this day 18 years ago, on December 29, 2003, the Russian  Ministry for Taxes and Levies, having completed the inspection, signed the “Act of the field tax inspection from 29.12.2003 No 08-1/1” and after that officially made tax claims to the Oil Company Yukos to the tune of more than 99 billion rubles. In so doing, the Tax Service completed the carrying out of controlling measures with regard to the Oil Company Yukos on the question of paying taxes and levies for 2000.

In the course of the inspection were exposed “deliberate actions of the Oil Company Yukos directed at artificial drawing up turnovers with oil and oil products through specially created organizations, registered in regions of the Russian Federation and in towns that unjustifiably provide (the oil company) with additional tax concessions”. The question was, predominantly, about the tax schemes coming through dubious firms in Mordovia, Evenkia, Kalmykia, as well as in closed administrative-territorial entities in Chelyabinsk, Sverdlovsk, and Nizhny Novgorod districts.

(See also the article “On this day, Nevzlin purchased for himself a chair in the Federation Council”. Beneficial locus from Yukos. Six shell firms under the supervision of Dubov and “bloody senator” Nevzlin).

In Yukos, naturally, they gave to all this a hostile reception, having said that they had paid all taxes, and as to the arisen claims, they would be contested judicially. However, as it is known, court proceedings on tax problems “of the most transparent company” had gone uneasily – tax specialists, in spite of the sabotage from Yukos part, had managed to collect a rather evidential data array corroborating machinations. And this was reflected in a whole series of arbitrage proceedings between the Oil Company Yukos and the Tax Service. The schemes for tax dodging, created around Mikhail Khodorkovsky's oil empire, as it was found out later on, had been used for years, and indicative of that was the final sum of tax evasion, including levies and penalties, – about 20 billion U.S. dollars.

It’s this sum of money that was mentioned December 29, 2004, on the pages of the newspaper “The Wall Street Journal” in the article entitled “S&P Downgrade Brings the Demise of Yukos Closer”.

As a matter of fact, the credit-rating company “Standard & Poor’s” (S&P) after arrears of payment on credit from one of a Western Bank, lowered the ratings of the Oil Company Yukos to the category D which means default on tax obligations. “The downgrade comes as Yukos continues to face almost $20 billion in back taxes”, explained the newspaper. 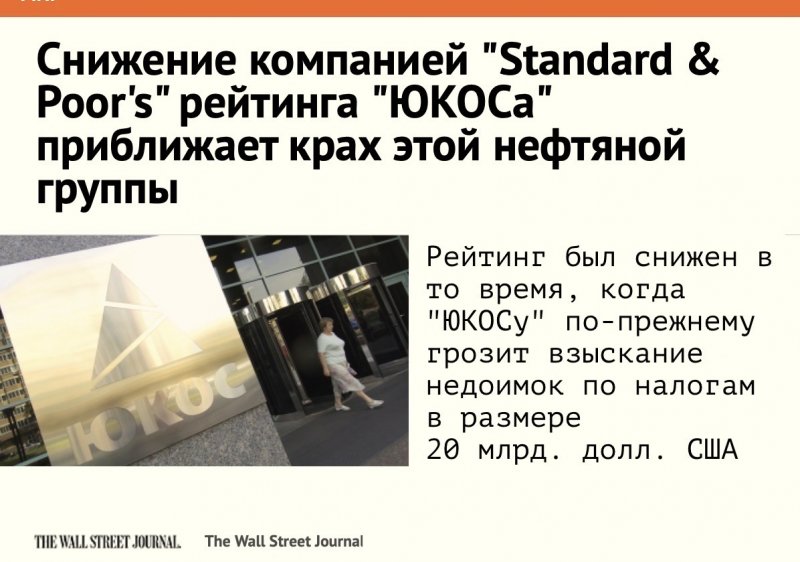 (See also the article “On this day, Yukos was brought back to tax reality”).

“And this was a very interesting, not only financial, indicator. It was also an indicator of the degree of Khodorkovsky’s international lie, who declared in December 2001 that the oil company and he himself “made a U-turn toward honesty”. However, time has shown that beautiful corporate reporting, fancy suits, and a rim with lenses "clear as baby's tear" are by no means a sign of honesty of the carrier of these suits and glasses. And this was established to the satisfaction of the court", notes the website Prigovor.ru.

(See the previous article “On this day, the former head of the Russian Fund of Federal Property was covered by “Wave”. “Malin colluded with Khodorkovsky and Lebedev who tricked him into concluding an illegal amicable agreement”. The website Prigovor.ru reminds its readers of what happened on December 28, 2005.