On this day, Nevzlin purchased for himself a chair in the Federation Council

Beneficial locus from Yukos. Six shell firms under the supervision of Dubov and “bloody senator” Nevzlin. The website Prigovor.ru reminds its readers of what happened on November 30, 2001.

On this day 20 years ago, on November 30, 2001, in the Upper Chamber of the Russian Parliament, the Federation Council, officially emerged a new member – Nevzlin Leonid Borisovich, born in 1959. This epochal event preceded formal procedures – backdoor agreements with the leaders of Mordovia, the decree of the head of the Republic of Mordovia Nikolay Merkushkin from 21.11.2001 No 126 “On Nevzlin L.B.” which held: “Appoint Nevzlin Leonid Borisovich a representative of the highest executive organ of state authority of the Republic of Mordovia in the Federation Council of the Federal Assembly of the Russian Federation”.

And, finally, the official procedure in the Chamber itself, confirming the right to bear the badge of a member of the Federation Council. This decision was formalized by ordinance No 357-SF from December 5, where Nevzlin from Mordovia was itemized at number 12. 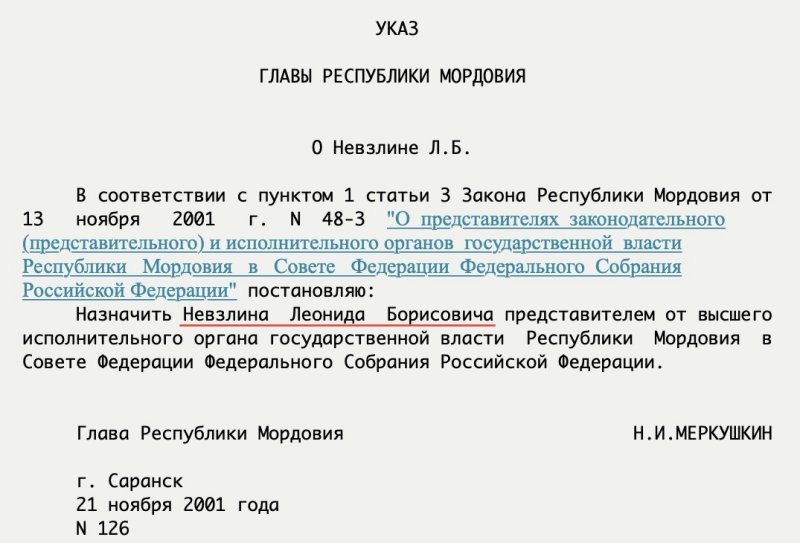 Describing such an important nomination, the newspaper “Kommersant” was published with a viperous headline “Mordovia exile of Leonid Nevzlin”. The head of the Jewish Council went to the Federation Council”. And without any hint at the gloomy attitude of the “creative analyst”, cited the bombastic explanation of the high contracting parties.

“In the recent two or three years between the Republic of Mordovia and Yukos have established good business contacts, from the cooperation with this oil company the budget of the Republic has been receiving considerable additional sums of money. I think that from the presence of Leonid Nevzlin of the Federation Council the Republic of Mordovia can receive still more advantages by determining the budget and participating in investment projects of the federal level”, explained his choice the leader of the region Nikolay Merkushkin.

“The confirmation of my candidacy I value as a high trust from the part of the Republic. Thanks to interaction, we will be capable to solve important issues, connected with the development of Mordovia”, with not less posh answered Nevzlin, as if he were trusted to nail a “golden spike” by the construction of a narrow-gauge railroad in a very remote taiga, and not to organize "protection" of the Yukos "dump-companies" clinging with an appetite to tax concessions granted to regions.

So artless “the locus” from Yukos besieged Saransk, the capital of Mordovia. Although, the development of the region happened to be rather strange – more likely, it was Mordovia that developed the purse of “the main shareholders” – like Dubov and Nevzlin – than Yukos developed the region.

Senator Nevzlin, and this is characteristic, was not the sole representative of Khodorkovsky’s empire in legislative branches from Mordovia. “Good business contacts with the Republic” “in the recent two or three years” had established Vladimir Matveyevich Dubov, who in 1999 received a mandate of a deputy of the Russian Parliament - State Duma. The billionaire Dubov got through in Parliament on the list of the coalition “Motherland – All Russia” by virtue of the fact that candidate Merkushkin withdrew from his mandate and passed it over to Dubov (Upper Volga regional group – Mari El, Mordovia, Penza Region). Then Dubov joined the “United Russia”. However, during the next election in 2003 the “United Russia” didn’t take him on board and redacted him from the list, partly because of the affairs with the promissory notes for which Dubov received in absentia a penal – 8 years of imprisonment.

After the investigation started to study tax crimes and various machinations of Khodorkovsky's empire, and closed in on the masterminds of contract murders and attempted murders, both “sons of Mordovia” – Nevzlin, and Dubov – hurriedly turned out to be in Israel where they have been hiding from the Russian justice, pretended to be “victims of the abuse of power”. 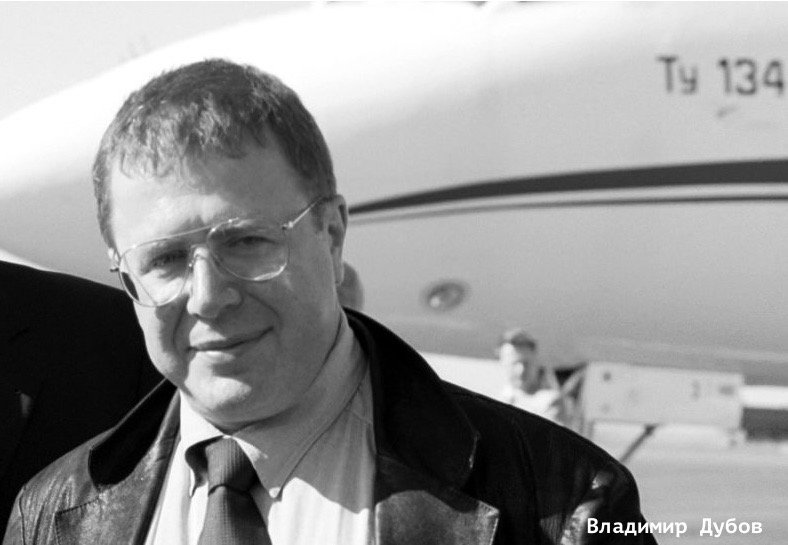 SIX SHELL COMPANIES UNDER THE SUPERVISION OF DUBOV

It was evident, and it was confirmed by the investigation and the large-scale tax inspections, that the organized group under the leadership of Yukos had made for itself a very interesting nest.

On the whole, according to the Tax service, the network “the privileged" of Yukos included 19 firms. From them, 8 entities evaded paying taxes, and six of them were registered in Mordovia. Only for 2001, Yukos lowered the tax base on value-added tax, income tax, property tax, and road users tax to the amount of 50.8 billion rubles. According to the Ministry for Taxes and Levies, through eight companies, six of which were registered in Mordovia (“Ratmir”, Alta-Treid”, “Yukos-M”, “Yukos-Moprdovia”, “Fargoil” and “Mars XXII”) and one each in Evenki Autonomous Region (“Ratibor") and Baikonur ("Mega-Alyans”). I.e., the lion’s share of machinations fell upon the Mordovia “privileged”.

(See also the article “On this day, "tax skeletons" dropped out of the Yukos closets “On this day the “laundry” of Yukos in Mordovia was searched”) 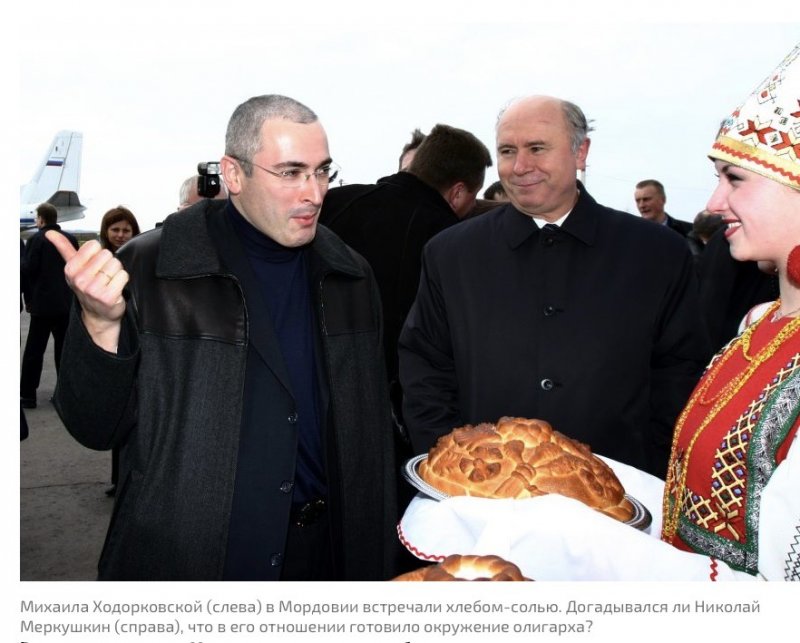 PREFERENCES IN EXCHANGE FOR MACHINATIONS

The scale and insolence of the con artists of Khodorkovsky’s empire were astonishing. There were not particularly many to shy away from, and just in case they momentarily cried about “connections” and “Parliament immunity”.

Only to “Fargoil” the tax services charged additional taxes to the tune of 130.24 billion rubles (4.43 billion U.S. dollars) for 2001-2003 – the biggest sum among all the trading firms of Yukos. On the whole, the territory of Mordovia accounted for about 78% of the claims connected with the reviewing of taxes paid by Yukos in 2000-2004", stressed the newspaper “Sovershenno Sekretno” after analyzing the “Mordovia traces” of Yukos.

As this media outlet pointed out, having promised 1.2 billion rubles of investments, the firm “Fargoil” during two years, according to the data of the Audit Chamber, “received in Mordovia preferences to the tune of 36 billion rubles”.

Moreover, “in the period from January to December 2002 on the accounts of “Fargoil” under the guise of its own profits was accumulated the net profit to the amount of 118 billion 310.5 million rubles, in 2002 this sum amounted to 125 billion 828 million 392 thousand rubles, and to the end of 2003 – 236 billion rubles. Thus, the government of Mordovia, having provided to the registered in Saransk JSCs “Fargoil”, “Yu-Mordovia”, “Ratmir” the beneficial tax regime, deprived the residents of the Republic of additional budget receipts to the amount exceeding 80 billion rubles”.

It’s like this that “the main shareholders of Yukos” – Dubov and Nevzlin - found their way into the Federal Assembly. One billionaire obligingly received a seat from the governor himself. The second was appointed by Merkushkin to the Federation Council. Thereat, the billionaires managed to avoid paying taxes as physical persons. As of today, they are both fugitive criminals. Dubov was sentenced to 8 years for economic affairs. And “the bloody senator” Nevzlin – to life imprisonment for masterminding of series of attempted murders and murders”, notes the website Prigovor.ru.

(See the previous article “On this day, the Murmansk affair of Lebedev and Khodorkovsky was laid bare. Offshores of cover and fictitious payments. “The Arbitration Court was misled by members of the organized group of Lebedev- Khodorkovsky". The website Prigovor.ru reminds its readers of what happened on November 29, 1956, and 1994.

Читать на Русском
#дело юкоса#YUKOS case#махинации ЮКОСа#the machinations of Yukos #Dubov, Vladimir#Nevzlin Leonid
Popular articles
Two Khodorkovsky’s “Open Russias” – two shell games of Khodorkovsky
The website Prigovor.ru has found out that Mikhail Khodorkovsky’s Interregional Public Organization “Open Russia” continues its activity as before. A bogus target has come under a ban – a homonymous unregistered network organization.
Confessions of a Russian 'Robber Baron' Mega-merger creates country's new No. 1 oil firm led by billionaire tycoons
By David R. Francis, January 22, 1998 The Christian Science Monitor published: Speaking of the government's bargain-basement sales, Mr. Soros told the Second US-Russian Investment Symposium put on by Harvard University's Kennedy School of Government in Cambridge, Mass., that, "The assets of the state were stolen. It was quite repulsive. I didn't want to have anything to do with it."
Paradise not lost for Khodorkovsky and Nevzlin
Prigovor.ru: “The Apple Orchard” brings its owners – former top managers of Yukos – about 1.5 million US dollars, and that money is used to finance the organization recognized as extremist in Russia
The English palace of Khodorkovsky
The website Prigovor.ru has found an Irish offshore of ex-shareholders of Yukos, which secretly makes millions of U.S. dollars in Russia. Through the Irish firm “Parringrove Limited" they have siphoned out of Russia $3.5 million of profits from leasing mansions in the community Zhukovka.