On this day, shareholders of Yukos hid themselves in offshores

How billionaire-swindler Nevzlin confused business press. “New structure” of Group Menatep Limited turned out to be an old scheme. The website Prigovor.ru reminds its readers of what happened on February 13, 2004.

On this day 18 years ago, on February 13, 2004, the business press devoted a lot of attention to various rumors, based on the report that the company Yukos is about to present a new structure of its shareholders. Some members of the market thought that the recommendation of Yukos Board of Directors to distance itself to the maximum from dubious persons, from "main shareholders" of the company bogged down in criminal cases, would allow stabilizing the situation not only in the company but also on the market.

Others didn’t believe in crystal clear intentions of the “main shareholders”, and publications described the plan of Semen Kukes, the head of Yukos Board, who, we have to point out, had seen a rather real scheme for pulling Yukos out of the hole. He hoped that by the "division" of the company and the troubled "main shareholders" the company would get a chance. "Actually", argued the newspaper "Finansovye Izvestiya”, “the world market saw Khodorkovsky to the door. Now, for the Western society, it is not that critically important, how will develop the conflict between the state with the main shareholders – in their consciousness happened a strategic divide of the “assets” proper of the company and the stone on its neck pulling the stocks down”.

HOW THE NEWS OUTLETS “BLOOMBERG”, “VEDOMOSTI”, “RBK” AND “LENTA”, IN SEQUENCE, BELIVED THE SWINDLER NEVZLIN

The stone, “pulling Yukos to the bottom”, emerged once more – the escaped from Russian Leonid Nevzlin said that in the registry of the company “Group Menatep Limited” controlling the main part of the oil company Yukos, there are now no physical persons. Nevzlin didn't mention any other details, to make it more intriguing, and left the press at a loss.

It has to be admitted that Leonid Nevzlin played with the business press as with credulous little fools. During several days, he managed several times to lie speaking to the press. Journalists fascinatingly hung on to billionaire's every word, having forgotten that he is a swindler. He organized a special campaign about the "nobility of the shareholders" with the help of Western news agencies.

“Leonid Nevzlin and Yuri Dubov are ready to hand over the shares to the state in exchange for the liberation of the former head of the company Yukos Mikhail Khodorkovsky and the president of the Board of Directors of the International Financial Association “Menatep” Platon Lebedev”, reported the newspaper “Vedomosti" citing Nevzlin and Dubov in accordance with the agency “Bloomberg”. 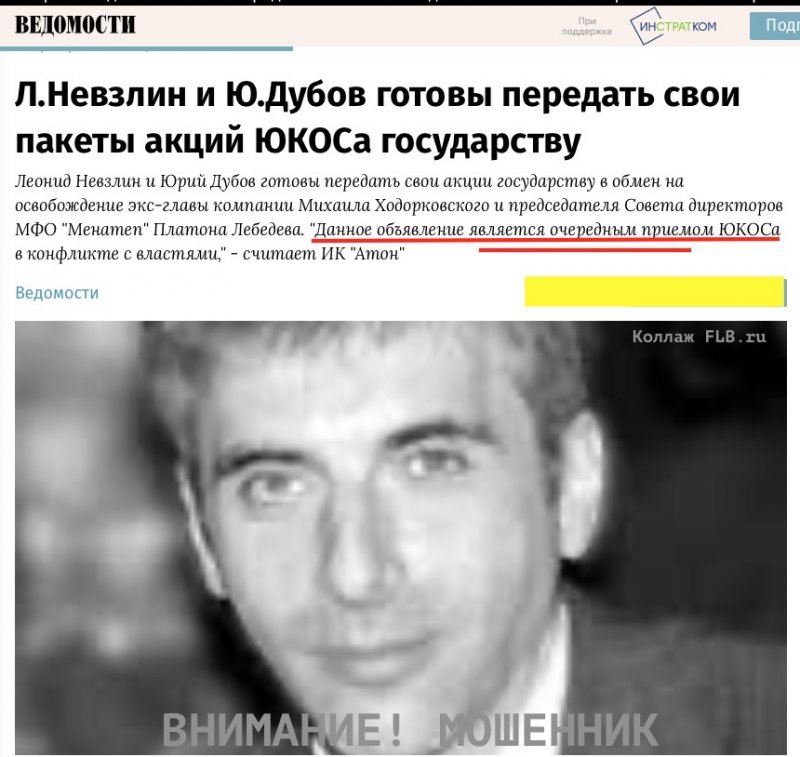 However, the market perceived with disbelief Nevzlin’s statement. The investment company “Aton” in its review writes: "had such negotiations really took place, they would not have got to the newspapers headlines", pointed out rightly analytics.

In vain the news agency “Bloomberg” and the newspaper “Vedomosti" believed Nevzlin, as he, practically, at once, refuted his intention, saying on the airwaves of the station "RBK" that "he had in mind something different". He said: "I did not propose any initiative about transferring to the state of my stake in the company Yukos". 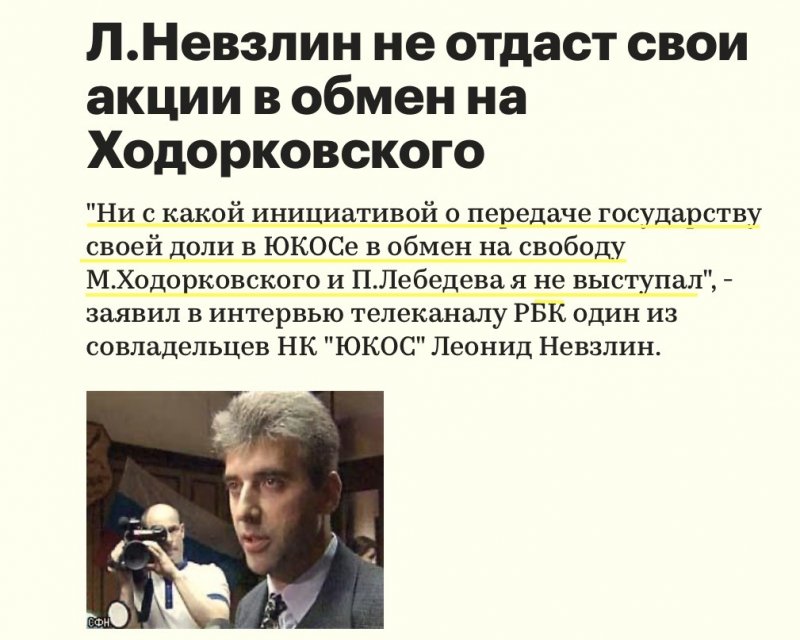 And then, speaking with “Lenta.ru”, the billionaire-swindler obscured the issue: “Nevzlin did not propose to exchange shares for Khodorkovsky, but he thinks about that”. 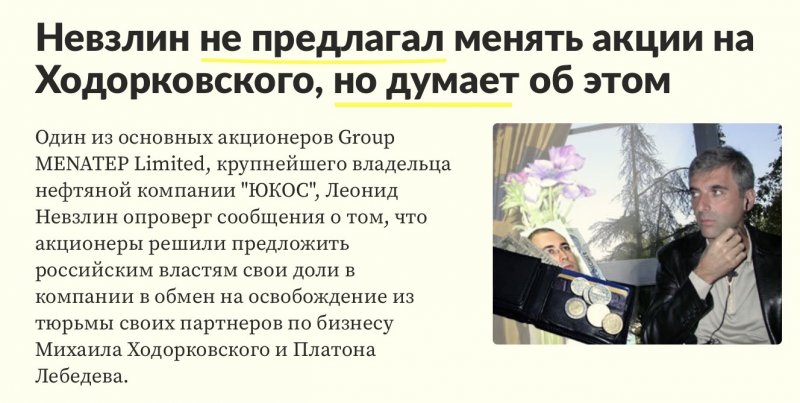 It's interesting to note, that the company Yukos gloomily limited itself by saying that Nevzlin’s words were “his personal statement”.

SIMPLY HID THEMSELVES IN OFFSHORES

One should note that all these games were played against the background of “the changes of structures of GML shareholders”, with the sole meaning to dig in Yukos stocks and hide them from possible problems, including confiscation, in offshores, reissuing them from physical persons to companies. This trick was “cracked” by the newspaper “Vremya Novostey” that published the article entitled “Khodorkovsky and Co hid themselves in offshores”.

Perhaps, the period in this story “about the new structure of Yukos shareholders”, a bit later, was put by the newspaper “Kommersant” that published a chart – “The structure of the share capital of the company Group Menatep Limited (Gibraltar) as of February 13, 2004”.

Some news outlets found in it “something new”, and even compared it with the structure of the shareholders from 2002, which was published not because Yukos wanted to be a “transparent company”, but because Yukos wanted very much to make more money, including by way of entry into the American security market.

Yet, the newspaper “Kommersant” immersed in this issue a bit deeper. And stated that “according to “the extract from the registry of Group Menatep shareholders, as of now, its (belonging to the group) securities are put in eight trusts managed by two trust companies, registered on the British Channel (Normand) Islands”.

And then – nothing new. As a source told the newspaper, “the current structure of Group Menatep shareholders, was formed before the arrest of Khodorkovsky and based on the old system”. In the words of the source, “Pulmus Trust existed as early as in June 2002. According to him, this is the trust the beneficiary of which was Mikhail Khodorkovsky. The stockholder of the trust is the company Palmus Trust Company Ltd. Shares of other trusts  are in nominal possession of the following seven nominal stockholders: Pavo Nominees Ltd, Pictor Nominees Ltd, Auriga Nominees Ltd, Draco Nominees Ltd, Mensa Nominees Ltd, Tucana Nominees Ltd, and Carina Nominees Ltd. All of them are registered at one address on the British Virgin Islands

All this offshore scheme of trusts is managed by “Rysaffe Trust Ltd” which, as the paper put it, “was several times accused by the British authorities of various wrongdoings”. “The tax agencies tried, although unsuccessfully, to secure through the court the recognition of unlawfulness of such trust schemes to avoid paying taxes which the firm Rysaffe had proposed to its clients. Apart from that, the company is accused of helping its clients by way of creating trusts, to avoid norms of the British stock market ordaining to expose owners of more than 3% of shares of publicly trading companies”. 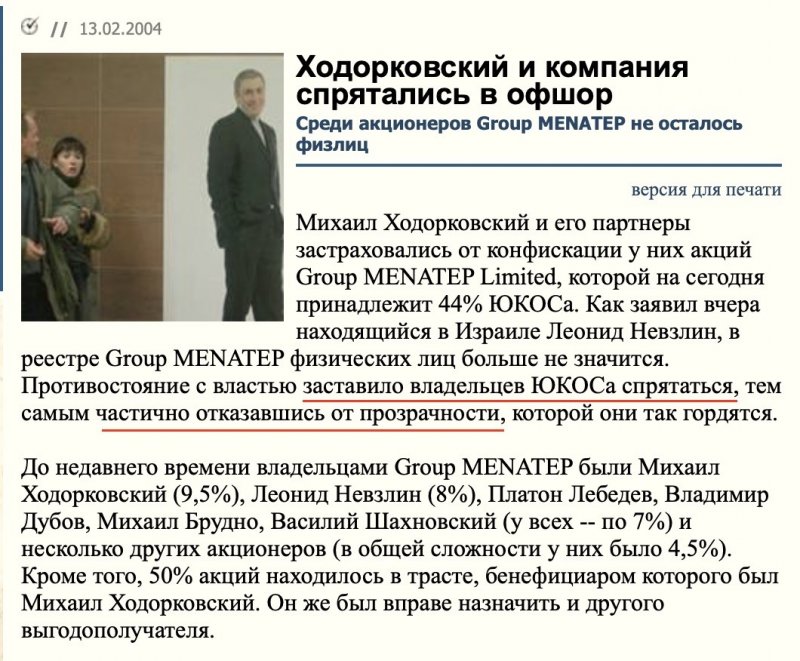 ONCE MORE A WELL-KNOWN DIRECTOR

From that time on, the firm “Rysaffe Trustee Company (C.I.) Limited”, obviously, has changed a bit its position and now connected with it is the company “Saffery Champness Management International Limited”, and with it, in their turn, are tied together the well-known “dumps” – Corbiere Trust Company Limited, Palmus company Limited and other not less curious offshores where the physical persons "dug themselves in"  and became criminal persons.

The authenticity of the offshores, in the sense that they are “the very same”, confirms one man – Kelvin Mark Hudson. He was mentioned in the investigation of the Free Lance Bureau (FLB) when Khodorkovsky was pulled by his “London tail” in an effort to “shake off” from him all his “grey schemes”. They were serviced as well by the firm “Rysaffe International Services Limited”.

Now, it's possible to know a bit more about the known director. As it is pointed out in the biography of Mr. Hudson on the website of the firm "Saffery Champness”, “before moving to Guernsey in 1995, Kelvin was a finance director in a consulting management firm which was spatialized in preventing disclosures and investigation of fraud”.

"To put it more simply, he has the experience of working with swindlers. And if he runs affairs of the organized group of criminals from Yukos, it means that the experience of mister director is rather diverse”, noted the website Prigovor.ru.

(See the previous article “On this day the arrest of Nevzlin was found legal”. A sluggish lawyer. An ordinary question of investigation a complaint translated into an artificial scandal. The website Prigovor.ru reminds its readers of what happened on February 12, 2004.

Читать на Русском
#дело юкоса#YUKOS case#схемы ЮКОСа#YUKOS schemes#методы ЮКОСа#YUKOS methods #Dubov, Vladimir#Lebedev, Platon#Nevzlin Leonid#Khodorkovsky Mikhail #Kukes, Simon
Popular articles
Two Khodorkovsky’s “Open Russias” – two shell games of Khodorkovsky
The website Prigovor.ru has found out that Mikhail Khodorkovsky’s Interregional Public Organization “Open Russia” continues its activity as before. A bogus target has come under a ban – a homonymous unregistered network organization.
Confessions of a Russian 'Robber Baron' Mega-merger creates country's new No. 1 oil firm led by billionaire tycoons
By David R. Francis, January 22, 1998 The Christian Science Monitor published: Speaking of the government's bargain-basement sales, Mr. Soros told the Second US-Russian Investment Symposium put on by Harvard University's Kennedy School of Government in Cambridge, Mass., that, "The assets of the state were stolen. It was quite repulsive. I didn't want to have anything to do with it."
Paradise not lost for Khodorkovsky and Nevzlin
Prigovor.ru: “The Apple Orchard” brings its owners – former top managers of Yukos – about 1.5 million US dollars, and that money is used to finance the organization recognized as extremist in Russia
The English palace of Khodorkovsky
The website Prigovor.ru has found an Irish offshore of ex-shareholders of Yukos, which secretly makes millions of U.S. dollars in Russia. Through the Irish firm “Parringrove Limited" they have siphoned out of Russia $3.5 million of profits from leasing mansions in the community Zhukovka.