On this day, Mikhail Khodorkovsky was for a second time summoned for interrogation

“As the result, it has been found out that in Yukos they evaded taxes not only as the company Yukos as such but also as physical persons. The website Prigovor.ru reminds its readers of what happened on October 20, 2003.

On this day 18 years ago, on October 20, 2003, Mikhail Khodorkovsky learned that he was summoned for interrogation to the Office of the Prosecutor General of the Russian Federation. The first deputy of Russia’s Prosecutor General Yuri Biryukov informed about this during a press briefing.

“We already interrogated once Khodorkovsky and we are intended to summon him once again”. According to the deputy prosecutor, "in the course of the recent searches, a great number of documents were seized which need a thorough examination. Nowadays, experts are working with them and determining directions, which persons in charge of Yukos use for tax evasion. As the result, it has been found out that they not only were evading taxes as the company Yukos as such but also as physical persons. In order not to drag out the pace of the investigation, we define separate episodes and prepare them for transferring to court”.

A CLEAR “SIGNAL” TO KHODORKOVSKY

The question was about the cases of the “main shareholders” – about Platon Lebedev and also Vassily Shakhnovsky, whose case was planned to be transferred to court. According to Biryukov, the case relating to Shakhnovsky, accused of failing to pay taxes to the tune of 29 million rubles, will be completed next week, and the materials will be given to the defendant and his lawyers for review. Apart from that, the Office of the Prosecutor General “operatively and within the shortest period of time had completed the pre-trial investigation on the case of Platon Lebedev”. “Unfortunately”, said Biryukov, “Lebedev and his attorneys have been already studying the materials of the case for 2.5 months, and that is delaying the transfer of the case to court”.

Hence, Khodorkovsky was given a clear “signal” - the evidence has been gathered, the investigation has a solid body of documents corroborating fraud and tax machinations, and the criminal cases of Shakhnovsky and Lebedev, essentially, are finished.

However, Khodorkovsky has put on a semblance that he does not hear and hardly understands the meaning of the said words. He started, first, to tell about the accelerated tempos of “borehole yields” and “record figures” of the oils company, the most powerful of which was, perhaps, the successful increase of “transparency” per thousand inspections, and said that he “with pleasure” would answer all question of the Office of the Prosecutor General of the Russian Federation in case his repeated summoning for interrogation.

"In recent times, so many cases have been filed against Yukos employees that the Office of the Prosecutor General has a lot of questions to those employees without cases”, said the head of Yukos. Laughed it off, sort of. But, in the interview to the newspaper “Novaya Gazeta” he accused “certain staff members" of the Office of the Prosecutor General of "bad faiths", declaring, in a characteristic manner, that that "if the investigators in three months will not have gathered proofs, suitable for open court, then “somebody may soon lose his shoulder marks and positions”.

According to the oligarch, unsubstantiated assaults on Yukos are obvious for “every disinterested, unbiased observer”.

In a nutshell, he behaved himself as a wood grouse on the lekking ground, and, apparently, he was hoping that a blessing would descend, a mystery would happen, hidden taxes would pay for themselves, and criminal cases would dissolve in archives. 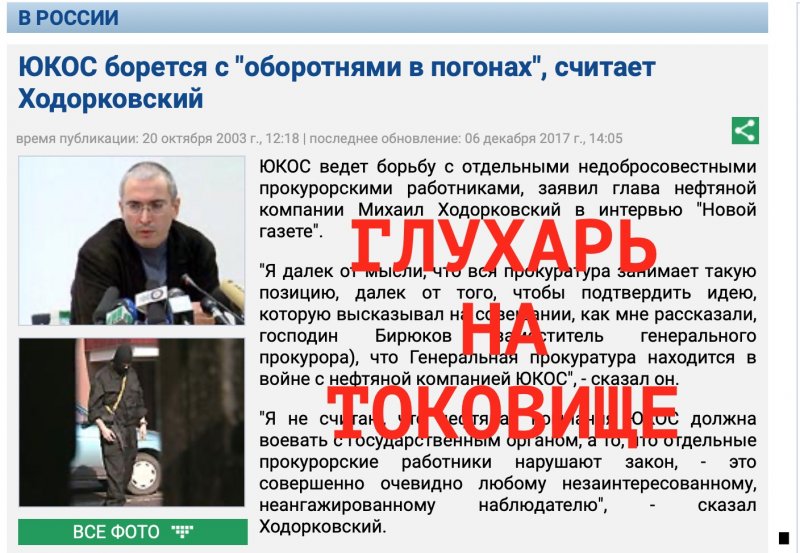 WITH PROOFS AND DOCUMENTS

By the way, the newspaper “Novaya Gazeta” conversing with the oligarch, related itself, probably, to “unbiased observers”, and it refused to object to Khodorkovsky, at least with regard to “the absence of proofs” of Khodorkovsky’s criminal activity.

At the same time, it’s just the newspaper “Novaya Gazeta", in 1999 and 2000, after a series of journalistic investigations entitled “The Borehole” published with proofs and corroborating documents, demanded from the Office of the Prosecutor General of Russia the speediest intervention in order to stop wide-scale machinations of the bank “Menatep” with budget money and promissory notes while desperately bemoaning the untouchability of Khodorkovsky. 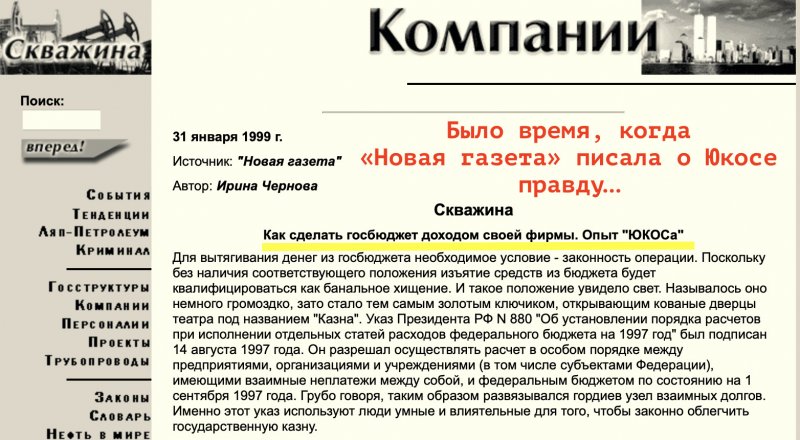 It has to be said that the facts obtained at that time by the outstanding journalist Irina Chernova and published in the newspaper “Novaya Gazeta” came to trial, and the proceedings on the “depository notes” ended with a judgment of guilt with regard to "the main shareholder" of Yukos and former deputy of the State Duma Vladimir Dubnov. He was sentenced to 8 years of imprisonment and found guilty of the scams the newspaper “Niovaya Gazeta” reported about.

But after that, the newspaper has changed its opinion – from the position "objective" to the pose “profitable” and has started in a theatrical manner to replicate "special editions" about "kangaroo trial of the remarkable Jukos managers”.

Another “unbiased observer”, to which everything was “obvious”, virtually, in five minutes after the arrest of Khodorkovsky, i.e. to the American Carnegie Foundation, received $500 thousand for “objectivity”.

And, finally, after the repeated invitation to the Office of the Prosecutor General, Khodorkovsky, instead of thoroughly preparing himself for a conversation with investigators relating to the same suspicions of committing tax crimes, rushed off to regions where “unbiased” grants recipients named after the oil oligarch and called “civil society”, heard with fascination Khodorkovsky’s fables about “transparency”, and, to be sure, about the “lack of proofs”, which the investigation had seized from Yukos offices and its firms by whole boxes”, notes the website Prigovor.ru.

(See the previous article “On this day, Khodorkovsky arrived in a detention facility”. Stages of a great way of Khodorkovsky and Lebedev. Billionaires-swindlers from the detention colony ЯГ-14/10 and the colony ОГ-98/3. The website Prigovor.ru reminds its readers of what happened on October 19, 2005.

Читать на Русском
#Налоги#taxswindlersyukos#налоговыемошенникиюкос #Lebedev, Platon#Khodorkovsky Mikhail #Shakhnovsky, Vasily
Popular articles
Two Khodorkovsky’s “Open Russias” – two shell games of Khodorkovsky
The website Prigovor.ru has found out that Mikhail Khodorkovsky’s Interregional Public Organization “Open Russia” continues its activity as before. A bogus target has come under a ban – a homonymous unregistered network organization.
Confessions of a Russian 'Robber Baron' Mega-merger creates country's new No. 1 oil firm led by billionaire tycoons
By David R. Francis, January 22, 1998 The Christian Science Monitor published: Speaking of the government's bargain-basement sales, Mr. Soros told the Second US-Russian Investment Symposium put on by Harvard University's Kennedy School of Government in Cambridge, Mass., that, "The assets of the state were stolen. It was quite repulsive. I didn't want to have anything to do with it."
Paradise not lost for Khodorkovsky and Nevzlin
Prigovor.ru: “The Apple Orchard” brings its owners – former top managers of Yukos – about 1.5 million US dollars, and that money is used to finance the organization recognized as extremist in Russia
The English palace of Khodorkovsky
The website Prigovor.ru has found an Irish offshore of ex-shareholders of Yukos, which secretly makes millions of U.S. dollars in Russia. Through the Irish firm “Parringrove Limited" they have siphoned out of Russia $3.5 million of profits from leasing mansions in the community Zhukovka.