On this day, Khodorkovsky bought sympathies of the Carnegie Foundation for $500 thousand

"Another "think tank" – The Brookings Institution – 'refused to receive scenting of Russian oil U.S. dollars because of suspicions concerning the past of the donator". The website Prigovor.ru reminds its readers of what happened on October 10, 2003.

On this day 18 years ago, on October 10, 2003, against the backdrop of the actions of the Office of the Prosecutor General of Russia, Mikhail Khodorkovsky presented his "new image" in America. For this purpose, he paid to the specialist of the lobbying firm "APCO" and, as the result, the Russophobes of The Carnegie Endowment in Washington agreed for $500 thousand to hear sentences on "democracy and civil society" of the former "oil robber" and "head of the failed bank "Menatep", suspected of money laundering.

"It is, really, a great honor for us to receive him (Mr. Khodorkovsky) here, in Carnegie Endowment, and we hope that we will be able to greet him once again in the future", said, to the applause, Jessica Mathews. Indeed, half a million dollars made more attractive the evening for experts of the Carnegie Endowment.

However, Khodorkovsky did not say anything special, he only played for the audience a usual record – business will always be business, but now it's time to think "about democracy and civil society", otherwise "authoritarianism" would come. About the same things he said a year earlier, in September 2002, at the meeting in the Library of Congress, but, in fact, Khodorkovsky before that had donated to the library 1 million U.S. dollars.

(See also "On this day, the tax swindler Khodorkovsky was doing matchmaking in the United States". 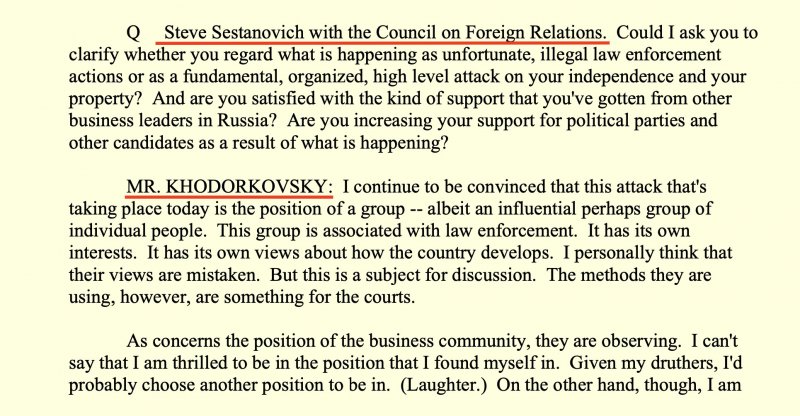 "500 thousand dollars the Russian oligarch presented to the Carnegie Endowment in Washington which assembled under its roof renowned economists and political analysts. Another "think tank" – The Brookings Institution – refused to receive scenting of Russian oil dollars because of suspicions relating to the past of the donator. However, according to the analyst of the center Fiona Hill (the very Fiona Hill who was the counselor of Trump on Russia), several such organizations, that are scarce of money for making Russian researches, ingratiated themselves with the squandering money head of Yukos", reported newspapers at that time.

However, hundreds of thousands of dollars that Khodorkovsky spend on oiling the wheels of the Carnegie Endowment played their role. When Khodorkovsky wound up in prison, frenzied "specialists" were first to defend him. Their frenzy consisted in completely boorish manner to make large-scale conclusions from events, the outcome of which was not (at the moment of the estimation) clear even to their direct participants.

By way of example, one can mention an article of the economist and former diplomat Anders Aslund (through the years he has gained the character of a pathological Russophobe), published on the website of the Carnegie Endowment for International Peace.

On November 1, 2003, a week after the arrest of "Mr. Khodorkovsky, Mister Aslund argued that "with the arrest of Russia's richest man, oil tycoon Mikhail Khodorkovsky, Russia has lurched into a deep political crisis". He played, as it were, with trumps. Then he began "to make a diagnosis with the help of a photo": 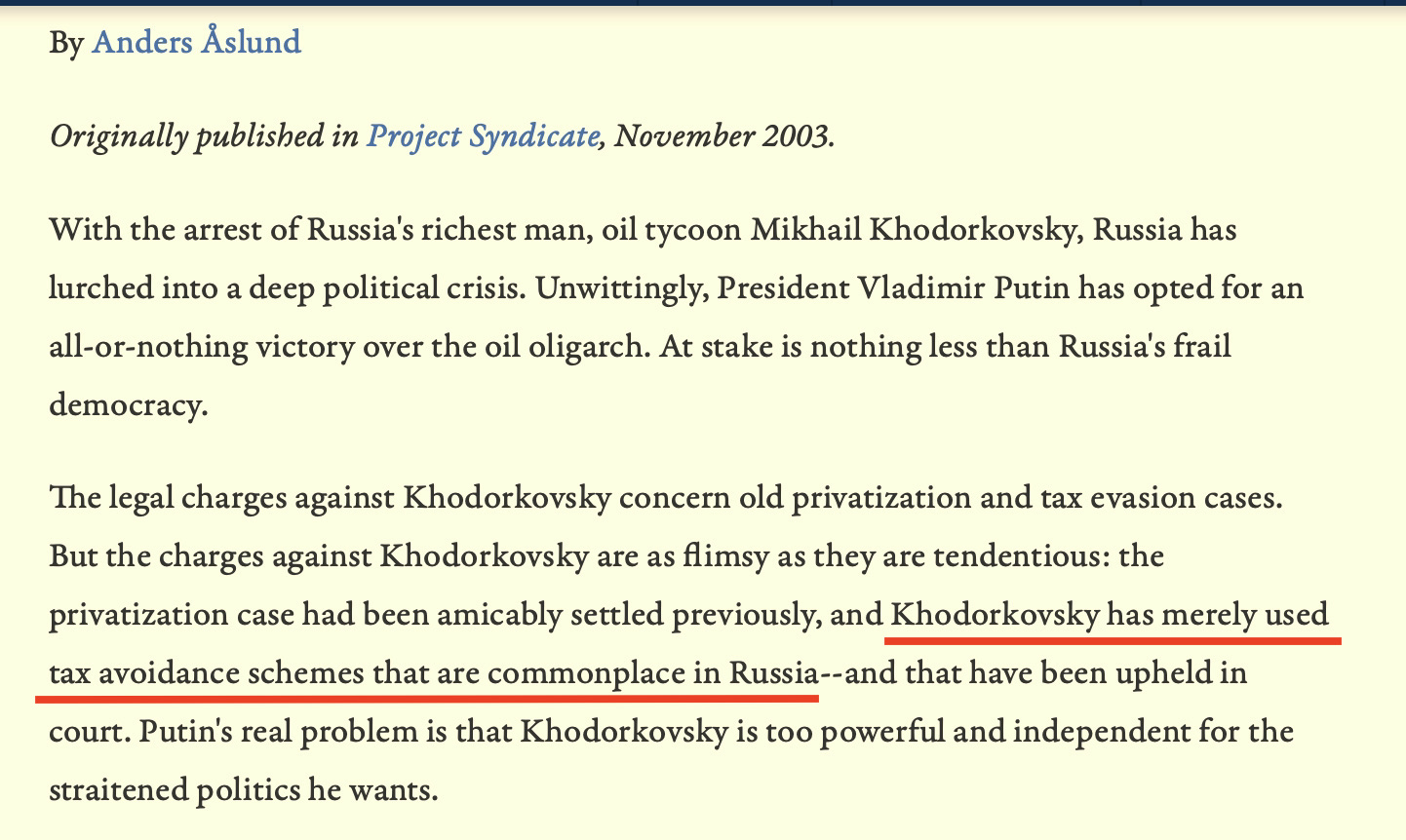 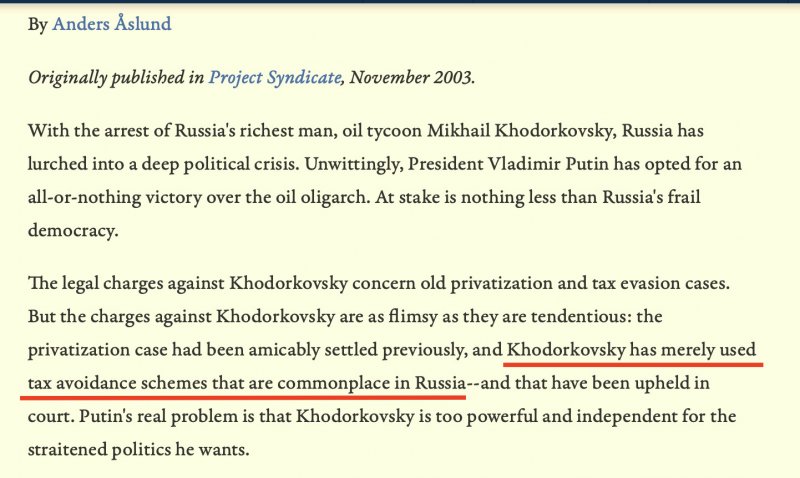 “The company Yukos with the help of openly criminal schemes to avoid paying taxes to the number of billions of U.S. dollars, but for fine-looking but unscrupulous experts of the Carnegie Endowment, such schemes "are commonplace in Russia". 500 thousand U.S. dollars steered this "think tank" in the favorable for Khodorkovsky course. ", notes the website Prigovor.ru.

(See the previous article "On this day, Nevzlin asked for Israeli citizenship". Investigators in Puchigin's office. Great tumult in wasps' nest. "Shadow" services of the firm "ALM Feldmans". The website Prigovor.ru reminds its readers of what happened on October 9, 2003.

Читать на Русском
#США #Khodorkovsky Mikhail
Popular articles
Two Khodorkovsky’s “Open Russias” – two shell games of Khodorkovsky
The website Prigovor.ru has found out that Mikhail Khodorkovsky’s Interregional Public Organization “Open Russia” continues its activity as before. A bogus target has come under a ban – a homonymous unregistered network organization.
Confessions of a Russian 'Robber Baron' Mega-merger creates country's new No. 1 oil firm led by billionaire tycoons
By David R. Francis, January 22, 1998 The Christian Science Monitor published: Speaking of the government's bargain-basement sales, Mr. Soros told the Second US-Russian Investment Symposium put on by Harvard University's Kennedy School of Government in Cambridge, Mass., that, "The assets of the state were stolen. It was quite repulsive. I didn't want to have anything to do with it."
Paradise not lost for Khodorkovsky and Nevzlin
Prigovor.ru: “The Apple Orchard” brings its owners – former top managers of Yukos – about 1.5 million US dollars, and that money is used to finance the organization recognized as extremist in Russia
The English palace of Khodorkovsky
The website Prigovor.ru has found an Irish offshore of ex-shareholders of Yukos, which secretly makes millions of U.S. dollars in Russia. Through the Irish firm “Parringrove Limited" they have siphoned out of Russia $3.5 million of profits from leasing mansions in the community Zhukovka.