On this day, Khodorkovsky arrived in a detention facility

Stages of a great way of Khodorkovsky and Lebedev. Billionaires-swindlers from the detention colony ЯГ-14/10 and the colony ОГ-98/3. The website Prigovor.ru reminds its readers of what happened on October 19, 2005.

On this day 16 years ago, on October 19, 2005, all progressive humanity learned that Mikhail Khodorkovsky, the former head of an offshore empire and sentenced to 8 years of imprisonment, was, at last, transported to one of the colonies of the Chita region for servicing his sentence.

This news clarifies the question about the geolocation of the rooky convict, as in the period of his transportation to the place of the servicing his punishment for tax fraud and other machinations, the press had been diligently driving him through the whole country and “losing".

“Where is, actually, Mikhail Khodorkovsky? A week has passed since the day when the former head of the oil concern Yukos was sent from the pretrial detention center “Matrosskaya Tishina” to a detention colony, and until now neither his relatives, not nor lawyers know there to”, argued Katya Tikhomirova on the pages of the German newspaper “Berliner Zeitung”, reproducing, in fact, the mutual tune of all the commentators and media outlets that “had lost” Khodorkovsky.

The situation, everybody in their own manner, “spun” his attorneys and “non-indifferent admirers” of Khodorkovsky’s tax crimes. In particular, the lawyer Anton Drel confidentially informed the media outlet RBC that the relatives of Mikhail Khodorkovsky “did not yet (as of 19.10.95) receive a note of advice”, whereas, “according to the internal code of conduct of the Federal Penal Service, after the delivering of a detainee to the place of servicing his sentence a respective letter of advice is sent”. “Illegal and immoral” calls such a behavior Yuri Schmidt, Khodorkovsky’s lawyer. The Federal Penal Service, even before dispatching prisoners to the place of their future stay, was obliged to present to lawyers information about the place of their further stay. It’s already over a week that he has had no contact with his client, Schmidt told the newspaper "Berliner Zeitung”.

In general, the attorneys diligently blew up this scandal out of nothing. The fact is that, as early as October 10, a representative of the Federal Penal Service reported “that Mikhail Khodorkovsky and Platon Lebedev were escorted from the pre-trial detention center to a standard regime penal colony. Under Article 17 of the Criminal Code of the Russian Federation, relatives of the prisoners will be informed on their whereabouts during 10 days after the arrival of the prisoners to the point of destination”, reported the newspaper “Kommersant”.

Then the press begins “to read Khodorkovsky’ coffee grounds”, and, pointing to the map, to look for Khodorkovsky with a predetermined tune – “the Russian authorities say nothing of the whereabouts of the most famous prisoner”.

“The Russian mass media already for several days have been searching for Khodorkovsky and Lebedev". They are being "discovered" now in the Moscow region, now in Tambov, now in Tver, now in the Urals, then in other places”, generalized the itineraries of transportation the newspaper “Berliner Zeitung”.

“The sources, one can say, did not subside, although exactness was not their forte. “Mikhail Khodorkovsky is sent for serving his sentence to Yamal-Nenets Autonomous Area, and Platon Lebedev – to Chita Region, told on Tuesday a source close to the Khodorkovsky's relatives. "So it is said in the instruction, but there is a chance that, in the last moment, they changed everything", he pointed out.

"However, this information has not been confirmed", "sources," told even on October 11, who, evidently, had read the message upside down. 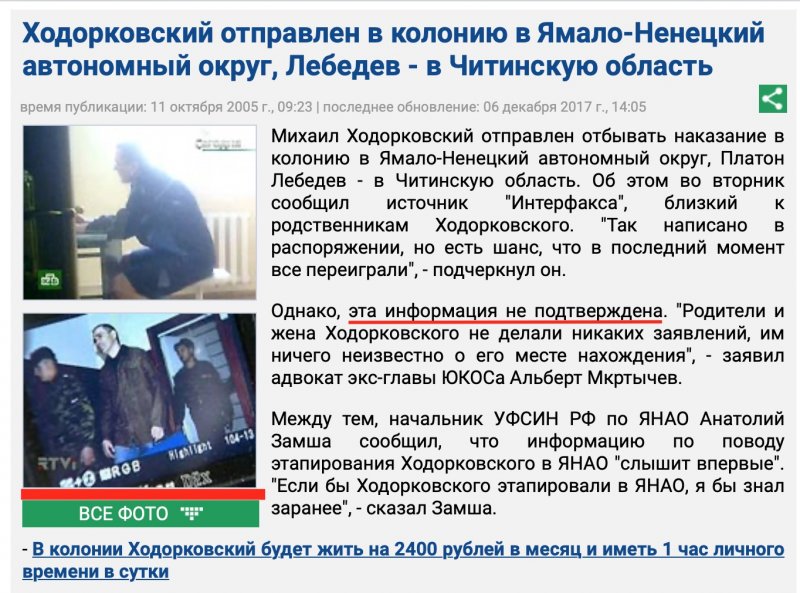 However, nobody was going to hide anything. As soon as the prisoner Mikhail Khodorkovsky arrived in the colony ЯГ 14/10, located in Chita Region, near the town Krasnokamensk, he was in a proper manner registered, and to his wife Inna a corresponding notification was sent.

As reported in the newspaper "Kommersant”, Khodorkovsky was washed in a bath, and then sent to quarantine with a promise to find him a job. “Khodorkovsky was satisfied with the bath-day”. Managers of the establishment particularly stressed that Khodorkovsky “will enjoy every right and fulfill all obligations of a prisoner, prescribed by the general regime”.

The attorneys, after taking out their discontent with the sending of their client “to the other side of the world”, expressed, after all, their readiness to fly to their client – it was already the second criminal case of Khodorkovsky connected with embezzlement, machinations, and laundering of criminal money. 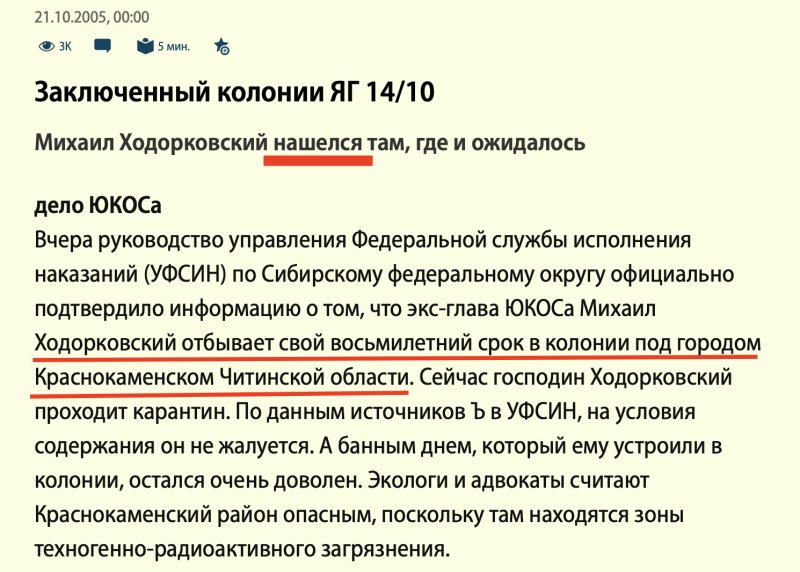 “HE, WHO DOES NOT WORK, SITS, AS A RULE, IN A PUNITIVE COMPARTMENT"

“The itinerary” of Platon Lebedev, the second accused together with Khodorkovsky, happened to be less winding on the pages of the press. As early as October 14, 2005, the newspaper “Kommersant” reported that Platon Lebedev was transferred to the special security colony ОГ 98/3 situated in the township Harp of the Yamal-Nenets Autonomous Area. Semyon Sayevich, a surveillance prosecutor of the Office of the Prosecutor General of the Yamal-Nenets Autonomous Area, told the media outlet that the colony “has a section of general regime where will be situated accused to the term of eight years mister Lebedev”.

According to the prosecutor, a three meals system is provided in the colony, as well as everyday doctor’s round and obligatory everyday work: “He, who does not work, sits, as a rule, in a punitive compartment”. 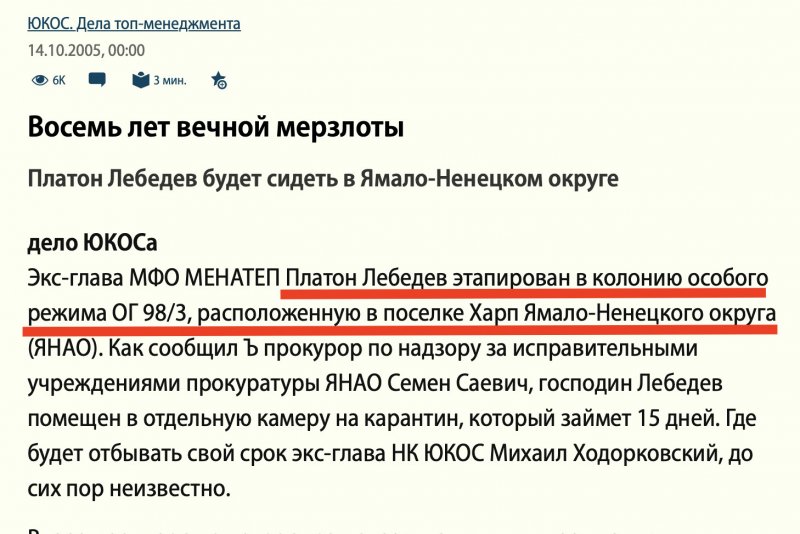 “It was reaffirmed to us”, said the lawyer Yevgeny Baru, “that Lebedev is there in their colony and that a possibility to have contact with his is guaranteed, provided we present corresponding warrants. Now we are preparing necessary documents, as we are going there not for a meeting, but to solve many work-related issues". As Mr. Baru told the newspaper, “now Platon Lebedev and his relatives can write letters to each other, he can receive deliveries and has the right for meetings”.

In such a way ended not only the itineraries of Khodorkovsky and Lebedev to the places of servicing their terms of imprisonment, but also a yet another leg of pro-Yukos disinformation”, noted the website Prigovor.ru.

(See the previous article “On this day, “The Washington Post” allowed tax crimes in Russia”. American press on "the image of Russia as a democratic state in the eyes of Western investors". The website Prigovor.ru reminds its readers of what happened on October 18, 2003.

Читать на Русском
#миллиардерымошенники#billionairesswindlers #Lebedev, Platon#Khodorkovsky Mikhail
Popular articles
Two Khodorkovsky’s “Open Russias” – two shell games of Khodorkovsky
The website Prigovor.ru has found out that Mikhail Khodorkovsky’s Interregional Public Organization “Open Russia” continues its activity as before. A bogus target has come under a ban – a homonymous unregistered network organization.
Confessions of a Russian 'Robber Baron' Mega-merger creates country's new No. 1 oil firm led by billionaire tycoons
By David R. Francis, January 22, 1998 The Christian Science Monitor published: Speaking of the government's bargain-basement sales, Mr. Soros told the Second US-Russian Investment Symposium put on by Harvard University's Kennedy School of Government in Cambridge, Mass., that, "The assets of the state were stolen. It was quite repulsive. I didn't want to have anything to do with it."
Paradise not lost for Khodorkovsky and Nevzlin
Prigovor.ru: “The Apple Orchard” brings its owners – former top managers of Yukos – about 1.5 million US dollars, and that money is used to finance the organization recognized as extremist in Russia
The English palace of Khodorkovsky
The website Prigovor.ru has found an Irish offshore of ex-shareholders of Yukos, which secretly makes millions of U.S. dollars in Russia. Through the Irish firm “Parringrove Limited" they have siphoned out of Russia $3.5 million of profits from leasing mansions in the community Zhukovka.