On this day Khodorkovsky was put on a wanted list

On this day 6 years ago, on December 8, 2015, it became known that Mikhail Khodorkovsky, the tax criminal, fraud dealer and the former head of the JSC Oil Company Yukos, was put on a wanted list. However, this time the question was not about economic crimes, for which Khodorkovsky had been jailed on two verdicts. This time Khodorkovsky was in absentia accused under Article 105, paragraph 2 (Article 105, paragraph 2 of the Criminal code of the Russian Federation – organizing of murder and attempted murder of two and more persons) within the criminal case pertaining to the murder of Vladimir Petukhov, the mayor of Nefteyugansk.

On the eve, Mikhail Khodorkovsky said that on his name a notice paper had come according to which Mikhail Borisovish Khodorkovsky “on December 11, 2015, at 10 a.m. ought to come to the Investigation Committee of the Russian Federation, at the address: Moscow, Tekhnichesky Lane, 2, office No 715, for interrogation as a defendant of the criminal case No 18/35-03”. On this subpoena, there is a handwritten note: “In so far as Khodorkovsky M.B. is now beyond the territory of the Russian Federation, his appearance is impossible”. 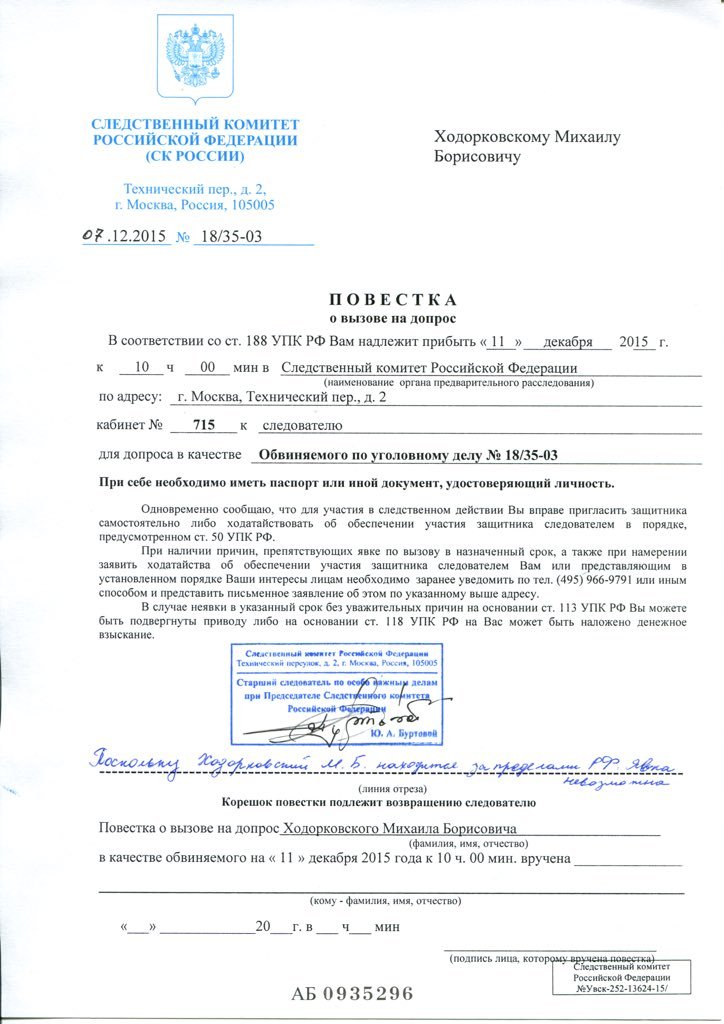 THE ADDRESS OF NON-RESIDENTIAL PROPERTIES

Having learned from his henchmen Leonid Nevzlin and Alexey Pichugin, accused of the series of murders and attempted murders, that he was no longer an outsider and “receiver of the gift” (https://www.kommersant.ru/doc/675751), Khodorkovsky, in all appearances, lost his temper. And he simply started to behave in a very rude way. He said the subpoena “was carried out” to his father. “As if they do not know my address. I inform: Hannover sq.16”

(See also the article “Pichugin organized at the direction of Nevzlin murders of 5 persons and attempted murders on 7 persons).

This address in the British capital really exists. But, in all likelihood, it’s a non-residential property. Supposedly, Khodorkovsky, for a certain period of time, had to take shelter in the conference room, in the kitchen, or, perhaps, in the supply closet. But the investigation is not interested in such premises. The investigation is interested in the fugitive criminal by the name Khodorkovsky M.B.

“INVOLVEMENT HAS BEEN RELIABLY ASCERTAINED…”

The information that Khodorkovsky was accused in absentia several days later became a proceeding moment.

A HOUSE, WHERE NEVZLIN’S HENCHMAN IS HIDING

It’s really difficult to service a subpoena to Khodorkovsky M.B. accused of murder – he shuns the investigation the same way as he tried to do that in October 2003, ignoring the official invocation. However, as of today, thanks to the investigation of the project “Prigovor.ru”, there is an address of residential premises the fugitive defendant is assigned to – the estate "Best Beech Place", situated 60 kilometers from London, in the county East Sussex, near the town Wadherst. 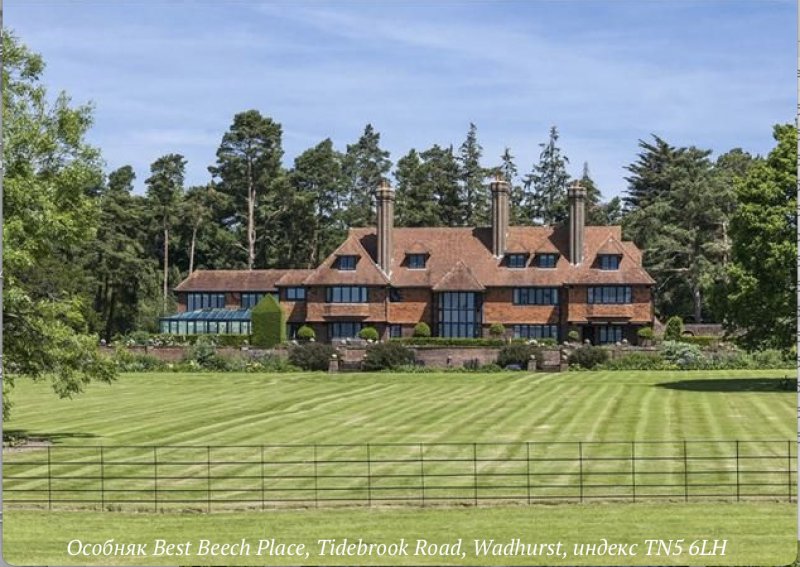 "It is, still, more accurate than the address "Hanover sq. 16" which Khodorkovsky easily declared the place of his residence", notes the website Prigovor.ru.

(See also the previous article “On this day, Yukos was brought back to tax reality”. Nearly $25.79 billion. The sum of the tax claims against Khodorkovsky's organized criminal group in the oil business was one and a half times more than the defense budget of Russia in 2005. The website Prigovor.ru reminds its readers of what happened on December 7, 2004.

Читать на Русском
#дело юкоса#YUKOS case#Khodorkovsky the fugitive oligarch#Ходорковский олигарх беглец #Khodorkovsky Mikhail
Popular articles
Two Khodorkovsky’s “Open Russias” – two shell games of Khodorkovsky
The website Prigovor.ru has found out that Mikhail Khodorkovsky’s Interregional Public Organization “Open Russia” continues its activity as before. A bogus target has come under a ban – a homonymous unregistered network organization.
Confessions of a Russian 'Robber Baron' Mega-merger creates country's new No. 1 oil firm led by billionaire tycoons
By David R. Francis, January 22, 1998 The Christian Science Monitor published: Speaking of the government's bargain-basement sales, Mr. Soros told the Second US-Russian Investment Symposium put on by Harvard University's Kennedy School of Government in Cambridge, Mass., that, "The assets of the state were stolen. It was quite repulsive. I didn't want to have anything to do with it."
Paradise not lost for Khodorkovsky and Nevzlin
Prigovor.ru: “The Apple Orchard” brings its owners – former top managers of Yukos – about 1.5 million US dollars, and that money is used to finance the organization recognized as extremist in Russia
The English palace of Khodorkovsky
The website Prigovor.ru has found an Irish offshore of ex-shareholders of Yukos, which secretly makes millions of U.S. dollars in Russia. Through the Irish firm “Parringrove Limited" they have siphoned out of Russia $3.5 million of profits from leasing mansions in the community Zhukovka.