On this day, Khodorkovsky was taken off from the plane in Novosibirsk

Apprehension at the refueling. Accusation under seven Articles of the Criminal Code of Russia. The preliminary sum of the damage to the state is more than 1 billion U.S. dollars. The website Prigovor.ru reminds its readers of what happened on October 25, 2003.

On this day 18 years ago, on October 25, 2003, in the course of an operation of special forces, the king of the "borehole liquid" Mikhail Khodorkovsky was apprehended at the airport of Novosibirsk.

On October 25, 2003, near 5 a.m. at the airport Tolmachovo in Novosibirsk landed an airplane that was on its way to Irkutsk. On its board, there was Mikhail Khodorkovsky with his entourage. Instead of flying from Nizhny Novgorod to Moscow, where already on October 24 investigators of the Office of the Prosecutor General of Russia had been waiting for him, “Khodorkovsky, the fighter for the rule of law”, demonstratively ignored the subpoena and headed in another direction – to be present at the seminar “Authorities. Business. Society” which was organized in Irkutsk.

Then came the standard special operation to apprehend and to reconduct the oligarch to the investigative bodies of Moscow. The plane with the Yukos delegation on board was blocked up, citizen Khodorkovsky was carefully taken out of the cabin, than loaded in another plane, and at 7.20 a.m. with a special flight he was dispatched to Moscow. And that was it, in fact.

The press, tamed by Yukos, goes without saying, launched out "sensational details" and thought out features. The evidence of witnesses, as usual, diverged. Some reported certain trucks "with put off headlights", others about "buses with tinted glasses" which "blocked up the plane". Thereat, the crew calmly left the board, although it was reported that the door to the cabin “was broke down”. After that, special forces soldiers “broke into the salon”.

“As it turned out”, reported viperish the newspaper “Kommersant”, “the command “Don’t move!” was not related to Mikhail Khodorkovsky. On the contrary, one of the siloviki said to him: "We have an order, come with us". Mikhail Khodorkovsky answered, "O.K., let's go". The oligarch and members of the strike team forthright left the plane and headed to the building of the airport.

Meanwhile, the plane with the oligarch on board came to the Russian capital, and with a cavalcade of cars with blinkers Khodorkovsky was transported to the place where he had not wanted to come on subpoena – to the Office of the Prosecutor General of the Russian Federation. After three hours of the intercourse with investigators, accusations were brought against him on seven Articles of the Criminal Code of the Russian Federation:

- Article 165 (Infliction of Property Damage Through Deception or Abuse of Confidence);

- Article 199, paragraph 2 (Evading Payment of Taxes and (or) Fees Collectible from Organizations; the same deed committed: a) by a group of persons by previous concert: b) on an especially large scale);

- Article 315 (Non-execution of a Court’s Judgement, Decision, or any Other Judicial Act); 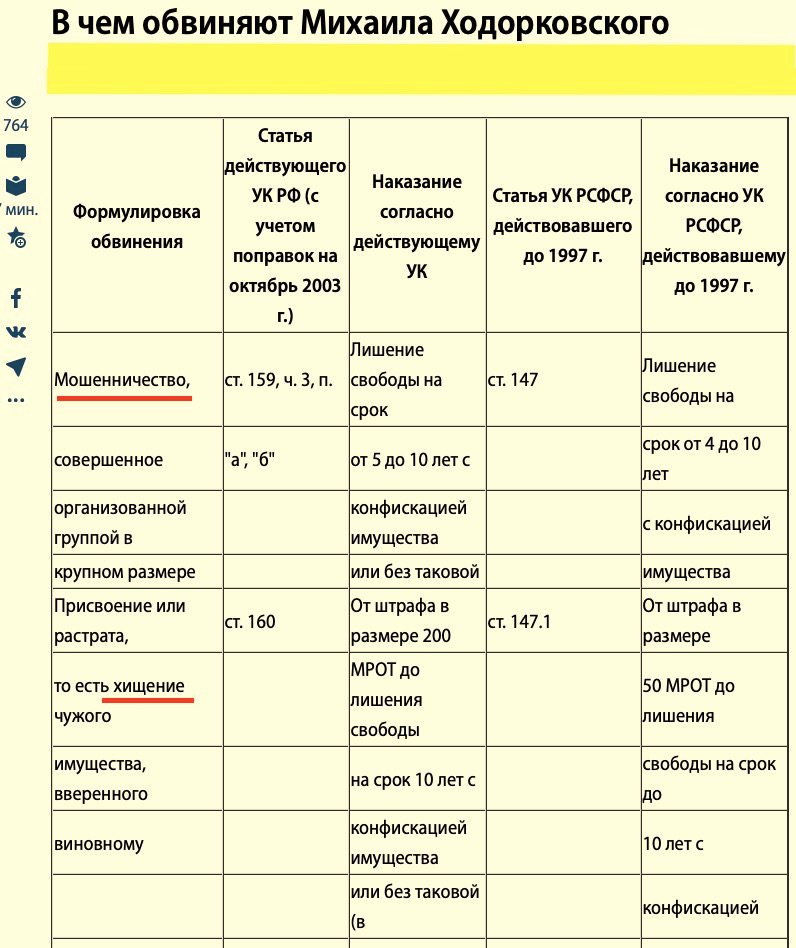 “The criminal case of embezzlement and tax evasion of Yukos and subordinated to it entities is unprecedented both with regards to the amount of the embezzled means and unpaid taxes and with regards to the volume of the investigative work. As of today, the sum of the damage to the state inflicted by the actions of Khodorkovsky and Lebedev, exceeds $1 billion", pointed out a representative of the Office of the Prosecutor General, commenting on the preliminary results of the investigation.

Such a “gentleman” set of Articles more common for economical swindlers as for a decent entrepreneur from “the most transparent company” demanded the choosing for the defendant a measure of restraint. On the same day, Khodorkovsky was transported to court, which, having heard the arguments of the sides, sent him in a pre-trial detention – to “Matrosskaya Tishina”

To evade hullabaloo, the decision was taken in camera. The press worked using words of lawyers. For instance, like this: “the lawyer Anton Drel said that his client, according to the decision of the court, would be under detention until December 30, 2003. According to the court, the ground for the detention was “nonappearance for interrogation on July 4”. 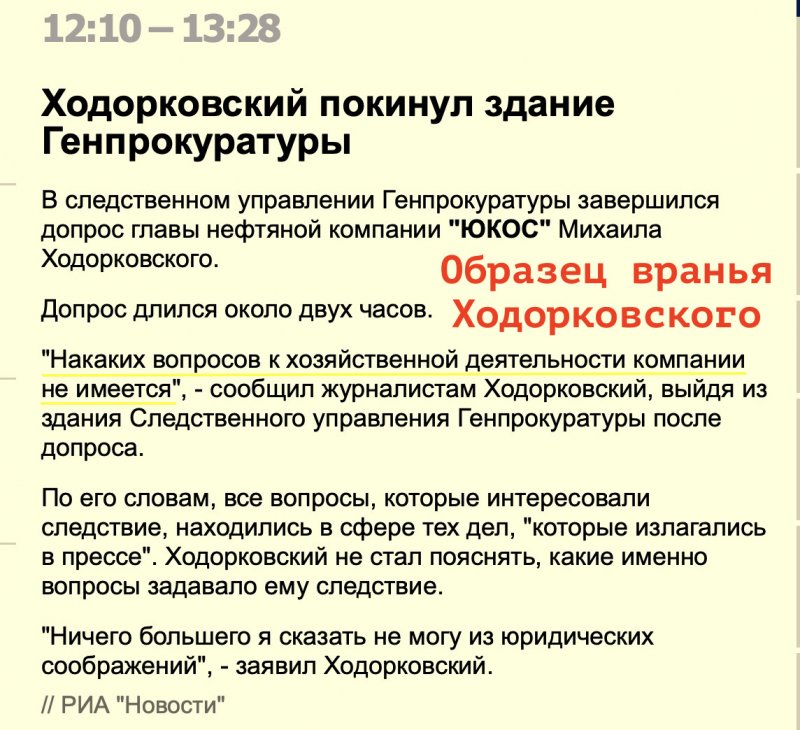 However, on July 4, 2003, Khodorkovsky personally presented to the press the sparing details of his nonappearance for interrogation. “There are no questions as to the business activities of the company”, told Khodorkovsky to reporters at the entrance of the Office of the Prosecutor General after the first interrogation. But at the end day of October 25, 2003, it became clear that Khodorkovsky simply lied”, notes the website Prigovor.ru.

See also the previous article “On this day, Khodorkovsky consciously ignored the investigator’s call in for questioning”. Instead of going to interrogation, the perky merchant "went to common people" at the Nizhniy Novgorod's trade fair. The website Prigovor.ru reminds its readers of what happened on October 24, 2003.

Читать на Русском
#дело юкоса#налоговый мошенник Ходорковский#tax swindler Khodorkovsky#YUKOS case #Khodorkovsky Mikhail #Drel, Anton
Popular articles
Two Khodorkovsky’s “Open Russias” – two shell games of Khodorkovsky
The website Prigovor.ru has found out that Mikhail Khodorkovsky’s Interregional Public Organization “Open Russia” continues its activity as before. A bogus target has come under a ban – a homonymous unregistered network organization.
Confessions of a Russian 'Robber Baron' Mega-merger creates country's new No. 1 oil firm led by billionaire tycoons
By David R. Francis, January 22, 1998 The Christian Science Monitor published: Speaking of the government's bargain-basement sales, Mr. Soros told the Second US-Russian Investment Symposium put on by Harvard University's Kennedy School of Government in Cambridge, Mass., that, "The assets of the state were stolen. It was quite repulsive. I didn't want to have anything to do with it."
Paradise not lost for Khodorkovsky and Nevzlin
Prigovor.ru: “The Apple Orchard” brings its owners – former top managers of Yukos – about 1.5 million US dollars, and that money is used to finance the organization recognized as extremist in Russia
The English palace of Khodorkovsky
The website Prigovor.ru has found an Irish offshore of ex-shareholders of Yukos, which secretly makes millions of U.S. dollars in Russia. Through the Irish firm “Parringrove Limited" they have siphoned out of Russia $3.5 million of profits from leasing mansions in the community Zhukovka.