On this day, Yukos was dissociating itself from shell-firms

The court about the recovery of 99 billion rubles. “The knowing actions of the oil company Yukos of registering turnovers with oil through specially created organizations”. The website Prigovor.ru reminds its readers of what happened on May 21, 2004.

On this day 18 years ago, on May 21, 2004, the subject of the claim of the Ministry for Taxes and Levies of Russia on recovery of 99 billion rubles from the oil company NK Yukos, that the leadership of the concern had hidden from taxation with the help of shell-firms registered in areas with preferential tax treatment. As it was established, such regions, having registered on their territories dummy firms, had not received the awaited investments which had been conditions for providing preferences, but, at the same time, the oil empire itself had used tax evasion to the maximum. In other words, “the kings of borehole liquid” had illegally taken hold of the situation.

The decision of the additional tax assessment to the Oil Company NK Yukos of 99.4 billion rubles of taxes for 2000 was taken as early as on April 14, 2004. To be more exact, the Tax Ministry serviced the oil company the claim of paying taxes, fees, and penalties to the total amount of 99 billion 375 million 538 thousand 234 rubles.

(See also the article “On this day Yukos was put on notice of tax machinations”).

Yukos didn’t want to pay anything, having declared itself “a good faith tax payer that fulfils all liabilities on a full scale”. The case went to court, where Yukos lawyers demanded to reject the claim of the Tax Service, and to stop the proceedings on this case.

In the basis of their position, the lawyers of Yukos laid down not nearly documents confirming the high tax discipline of the company, but their own doubts that the civil servant that had signed this claim on behalf of the Tax Service, had not been entitled to it (The claim was signed by the deputy minister for taxes and levies Igor Golikov).

The attempt to “derail” the tax claims by such an original way was interesting, but senseless. It was quickly found out that, according to the Russian legislation and his official duties, Igor Golikov had the right to sign the corresponding claims. The court in its ruling held that the Ministry for Taxes and Levies “didn’t break the order of filing a claim in court, and the claim document was signed by persons what had the right to do it”.

Moreover, the court didn’t find out any reason to stop the proceedings on the case. Apart from that, the court upheld the motion of the Ministry for Taxes and Levies of Russia on calling to account as a litigant the company “Yukos-Moskva”.

The sum of the tax evasion that exceeded 99 billion rubles was exposed during the first inspection of the tax reporting of the “most transparent” oil company. In the “Report of the field tax audit from 29.12.2003 No 08-1/1, mentioned were “the knowingly actions of the Oil Company Yukos on artificial formalizing oil and oil products turnovers through specially created organizations registered in regions of the Russian Federation and in towns which wrongfully provide (to the oil company) additional tax preferences”. It was mainly a question of tax schemes going through dubious firms in Mordovia, Evenkia, Kalmykia, as well as in closed administrative-territorial units (ZATO) in Chelyabinsk, Sverdlovsk and Nizhny Novgorov regions”.

HOW KHODORKOVSKY* ACCIDENTALLY TURNED IN “SHELL-FIRMS”

The company Yukos was exasperated by the tax accruals, and promised menacingly to appeal any claims in the court of law. However, it turned out to be not the best idea. During the legal proceedings on tax questions, the defense in all possible ways retracted from the shell-firms, engaged in Yukos grey tax operations. They swore by all that is holy they had nothing to do with Yukos transparent activities.

At the same time, all documents and witness interviews clearly indicated that some firms had been registered on shill passports, they had been connected with each other, and had been part of the “corporate perimeter” of the oil empire as “affiliate” structures.

Later, the version of the Tax Service and the Prosecution Service on “shill character of “affiliates” accidentally confirmed the tax trickster Mikhail Khodorkovsky himself.

By the way, as we know now, Khodorkovsky turned out to be not only a swindler, but also a traitor, primitive Russophobe, and de-jure a foreign agent.

* On May 20, 2022, the Ministry of Justice of the Russian Federation included M.B. Khodorkovsky in the list of physical persons, performing functions of foreign agents”, notes the website Prigovor.ru. 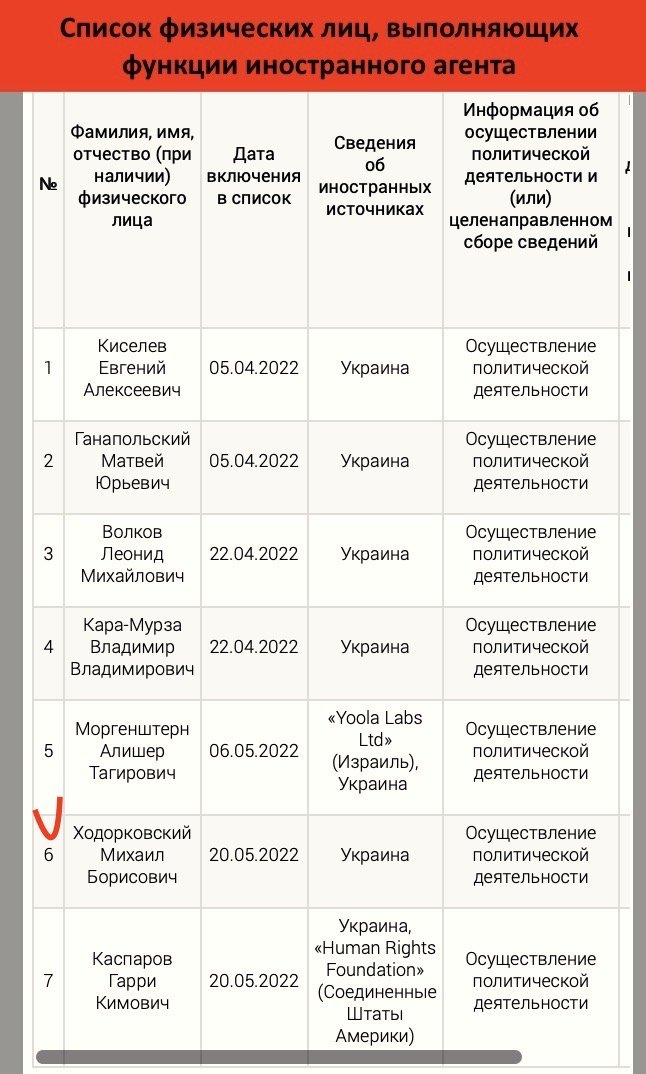 (See also the previous article “On this day, Ms. Liptser complained about 3 centimeters of Khodorkovsky’s case”. “The mentioned shell-enterprises were founded by members of the organized group headed by Khodorkovsky M.B. and Lebedev P.L…” The website Prigovor.ru reminds its readers of what happened on May 20, 2005).

Читать на Русском
#дело юкоса#YUKOS case#tax evasion YUKOS#уклонение от налогов ЮКОСа#схемы ЮКОСа#YUKOS schemes #Khodorkovsky Mikhail
Popular articles
Two Khodorkovsky’s “Open Russias” – two shell games of Khodorkovsky
The website Prigovor.ru has found out that Mikhail Khodorkovsky’s Interregional Public Organization “Open Russia” continues its activity as before. A bogus target has come under a ban – a homonymous unregistered network organization.
Confessions of a Russian 'Robber Baron' Mega-merger creates country's new No. 1 oil firm led by billionaire tycoons
By David R. Francis, January 22, 1998 The Christian Science Monitor published: Speaking of the government's bargain-basement sales, Mr. Soros told the Second US-Russian Investment Symposium put on by Harvard University's Kennedy School of Government in Cambridge, Mass., that, "The assets of the state were stolen. It was quite repulsive. I didn't want to have anything to do with it."
Paradise not lost for Khodorkovsky and Nevzlin
Prigovor.ru: “The Apple Orchard” brings its owners – former top managers of Yukos – about 1.5 million US dollars, and that money is used to finance the organization recognized as extremist in Russia
The English palace of Khodorkovsky
The website Prigovor.ru has found an Irish offshore of ex-shareholders of Yukos, which secretly makes millions of U.S. dollars in Russia. Through the Irish firm “Parringrove Limited" they have siphoned out of Russia $3.5 million of profits from leasing mansions in the community Zhukovka.