On this day a witness revealed secrets of Yukos ownership

“Shares of the Oil company Yukos changed hands many times, but, in fact, they belonged to Khodorkovsky, Nevzlin, Brudno, Dubov, and were under their control…” The website Prigovor.ru reminds its readers of what happened on March 26, 2016.

On this day 6 years ago, on March 26, 2016, a witness testimony was published in the press about the manipulations during privatization of Yukos, data for the proceedings of the District Court of the District Columbia, United States, where litigations were underway about the recognition on the territory of the United States the arbitration decision of The Hague on the recovery from Russia $50 billion to the benefit of swindlers of Yukos led by the fugitive criminal Leonid Nevzlin sentenced to life-long imprisonment for organizing a series of murders and attempted murders.

Written evidence of the witness informed the Court and the public about the fact that former Yukos shareholders, who had been at law with Russia in The Hague, “are not investors, but only intermediate firms for nominal owning of the oil company’s shares.

(See also the article “Yukos shareholder carousel”. “All deals made in the joint-venture “RTT”, were meant to conceal real owners of shares”, Schemes from 1990s).

According to the newspaper “Kommersant”, a top-manager of the joint-venture “RTT”, the president of the Board of which was Mr. Khodorkovsky, said that the company had been founded by the bank “Menatep” and the Swiss firm “Menatep S.A.” for providing consultative services, as well as for creation and registration of various firms, which were to participate in the privatization. The founded companies were not legally affiliated, but, in fact, they were under control of “RTT”. The network of joined ventures included roughly 450-500 Russian legal persons and nearly 100-120 companies in offshore jurisdictions, which were conducting no activity and were being used for holding assets, credits and profits from Yukos and other holdings of the group. Moreover, offshores were being registered in order to conceal real owners of companies and other assets, received by “Menatep” through auction sales. According to the witness, it is the company “RTT” that had created the firms “Laguna” and “Reagent” that had had been allowed to take part in the loans-for-shares auction sales and to buy Yukos shares, and nominal directors of these CJSC had been employees of “RTT”, said the witness Gitas Povilo Anilionis. 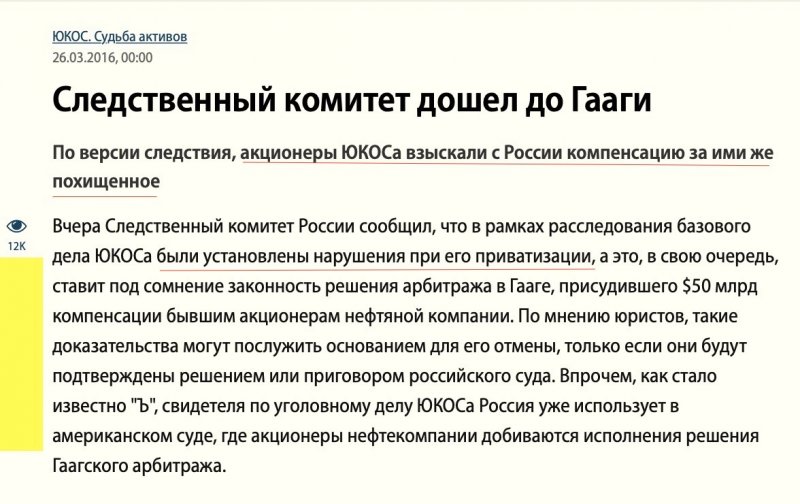 (See also the article “On this day, Lebedev’ assistant told about offshores).

As it was pointed out in the testimony of the witness, “the shares of the Oil Company Yukos changed hands many times during the period from 1995 to 2000. From the practical point of view, these shares, actually, belonged to Mr. Khodorkovsky, Mr. Nevzlin, Mr. Brudno, Mr. Dubov and other leading persons of the bank “Menatep, and the JSC “Rosprom”. All deals, made by my subordinate employees in the joint-venture “RTT”, were intended to conceal real ownership and control, as well as to help to dodge taxes…”.

“ACTUALLY, THE SHARES WERE STOLEN”

And the day before, on March 25 of the same year, the Investigative Committee of Russia described in details the scheme of the machinations, unveiled by specialists, that had been used by Mikhail Khodorkovsky during the privatization of the oil assets.

So, “according to the investigation, the privatization of Yukos in 1995 was made with the breach of the competition law and of the antimonopoly law. At that time, Khodorkovsky’s team presented for participation in the auction the CJSC “Laguna” and the CJSC “Reagent” that, in fact, belonged to him, pretending that these companies were independent legal persons. The CJSC “Laguna” won the competition and the auction sales, however, the payment for the shares were made by means of the bank “Menatep”, and the main source of them were personal means of clients and investors. “Laguna” itself had no its own pecuniary means.

At the same time, the bank “Menatep” didn’t get back the paid money, and in several years it was driven to bankruptcy. Thus, Khodorkovsky received these shares at no expense, for somebody else’s money, i.e. they were, actually, stolen”, it was pointed out in a statement of the Investigative Committee.

“To double back traces, and to exclude possible risks of ruling these deals with Yukos shares illegal, the shares were redrafted several times, first between Russian legal persons, and then, fearing, obviously, of the exposure of these machinations in Russia, it was decided to redraft these shares on foreign companies.

In the end of the day, the owners of the shares became the company “Hulley Enterprises Ltd”, “Yukos Universal Ltd”, and “Veteran Petroleum Ltd”, registered on Cyprus and the Isle of Man. All these companies were also under control of Khodorkovsky, and payments for the shares were reflected in documents only for appearance, and, in fact, were absent”, pointed out the Investigative Committee of the Russian Federation.

(See also the article “On this day, “Menatep” pulled up an affair with the stock of shares belonging to the state

(See also the article “Rising star of the oil market”. A solid firm and a strategic partner of Yukos “seemingly, deals with oil”).

Mikhail Khodorkovsky in response to the description of his machination by the Investigative Committee, published a rather helpless “refutation”. “I bought Yukos in 1966, as all others, according to the laws of that time”, said Khodorkovsky. As a fly on the neck of a bull (“we ploughed”), he impudently acquired the achievements of oilmen who raised oil production after the ruins of the first years of perestroika.

“Khodorkovsky, traditionally, said nothing about the fact that by his machinations he had not only spoiled the company, but also had cheated creditors with shareholders, as, according to him, everybody was guilty of that, except for the “robber-baron” himself with glasses as transparent “as a baby’s tear trop”, notes the website Prigovor.ru.

(See also the previous article “On this day, Alexey Pichugin was passed a sentence upon without condescension”. By a majority of voices – eight against four – the collegium of jurors adjudged Alexey Pichugin guilty of ordering and organizing murders. The website Prigovor.ru reminds its readers of what happened on March 25, 2005).

Читать на Русском
#дело юкоса#YUKOS case#офшоры ЮКОСа#схемы ЮКОСа#YUKOS schemes#YUKOS offshore companies #Brudno, Mikhail#Dubov, Vladimir#Nevzlin Leonid#Khodorkovsky Mikhail
Popular articles
Ahnenerbe of Khodorkovsky
The Foundation “Future of Russia”* of Mikhail Khodorkovsky ** has issued a Russo-phobic manifesto “Russian Chromosome” and is pushing ideas of “new racism” directed against the Russians. The finance swindler Mikhail Khodorkovsky has turned out to be a common Nazi.
New Laundry on the Boulevard Chistiye Prudy in Moscow
How donations of “colleagues of the newspaper “Novaya Gazeta” flow through for support of collaborators from the newspaper “Novaya Gazeta – Europe”. $25 thousand from “Human Rights Foundation”. A Swiss purse of “friends”.
Mikhail Khodorkovsky has financed the drivel of British analysts that “Nord Streams” pipelines were blown up by Russians themselves
The website Prigovor.ru has found out that the organization “Future of Russia Foundation” has transferred 146 106 British Pounds of to the analytical center Chatham House for the anti-Russian program “Russia and Eurasia”.
Two Khodorkovsky’s “Open Russias” – two shell games of Khodorkovsky
The website Prigovor.ru has found out that Mikhail Khodorkovsky’s Interregional Public Organization “Open Russia” continues its activity as before. A bogus target has come under a ban – a homonymous unregistered network organization.