On this day, the court interrogated Andrey Kraynov

“My fault is only that I believed the managers of the bank “Menatep". The day of the "saint" Mikhail-swindler at the hotel "Sheraton"-Sheremetyevo. The website Prigovor.ru reminds its readers of what happened on February 14, 2005, and 2015.

On this day 17 years ago, on February 14, 2005, during the hearing on the Yukos first case, the Meschansky Court of Moscow started interrogations of the defendants of the case, namely Mikhail Khodorkovsky (Oil Company Yukos), Platon Lebedev (International Finance Association MFO “Menatep”), Andrey Kraynov (CJSC “Volna”).

“In the Meschansky Court, on the case of Mikhail Khodorkovsky, Platon Lebedev, and Andrey Kraynov, the interrogation started of one of the defendants – Andrey Kraynov. He headed the enterprise “Volna”, which had won the investment tender to buy 20% stock of shares of the company “Apatit”. According to the investigation, this deal was concluded illegally”, informed its readers the newspaper “Vedomosti”.

The business press hinted that there is "something wrong" in court, sort of. "Although the order was established of the interrogation of the defendants (first Lebedev, then Khodorkovsky and Kraynov), nevertheless, Kraynov was the first to be interrogated”. Other media outlets creatively developed the thought and reported that Kraynov said he “wanted to give testimony after the two other defendants, but the court, still, started with him”.

In fact, Khodorkovsky and Lebedev asked, together with the defense, to provide them more time “to work out the position”.

"Judge Irina Kolesnikova proposed to Platon Lebedev to start to give testimony, but Mr. Lebedev asked the Court to give him a couple of days for preparation. Mikhail Khodorkovsky said the same. As the result, Andrey Kraynov had his testimony yesterday, as he was ready for that", explained the newspaper "Kommersant”.

For reference. Kraynov Andrey Vladimirovich, (born 1964). Department head on investment projects in the CJSC “MFO “Menatep”. Member of the Board of Directors of the CJSC “Rosprom”, general director of the CJSC “Volna”. One of the leading employees of the joint venture “RTT”.

Headed the CJSC “Volna" that won the investment tender on 20% stock of shares of the industrial plant "Apatit”. Kraynov resold the shares in small stocks and did not fulfill the investment obligations to the tune of $283 million. “Volna” was a shell firm and acted in the interests of Khodorkovsky and Lebedev.

Apart from that, Kraynov was mentioned in the episode with regard to the creation of fictitious arrears of the administration of the Volgograd Region to JSC "Emitent”, JSC “Yuniel” and others. Kraynov A.V., on the totality of episodes, was accused under three Articles:

Article 159 of the Criminal code of the Russian Federation (Swindling or Stealing of the other people’s property, committed by a group of persons by previous concert on an especially large scale);

Article 315 of the Criminal code of the Russian Federation (Willful non-execution of a Court's judgment, decision or any other juridical act by representatives of commercial organization);

Article 165 (Infliction of property damage through deception or abuse of confidence where there is no evidence of embezzlement on a large scale).

“WAS COMPLETELY SUBORDINATED TO THE LEADERS OF THE BANK “MENATEP”

"My fault," said during the proceedings Andrey Kraynov, “ perhaps, is that I believed the leaders of the bank “Menatep” and struggled not surely enough for providing means (for the realization of the investment program for the JSC “Apatit”).

Thereat, the defendant stressed that he had not influenced anything that much, and only executed instructions and orders of “Menatep” management”.

“I was completely subordinated to the department of control and revision (KRU) of the bank “Menatep”, pointed out Andrey Kraynov". In his words, the other 12 employees of the department also managed such firms. Later, after a regular reorganization, Mister Kraynov headed another three such holdings. Yet, he did not “head other companies, conducted no economic activity, did not appoint directors”.

“I was never head of a department in the MFO “Menatep”, and this corroborated by my work record book”, cited the newspaper “Kommersant” the position of Andrey Kraynov. "All questions were solved through Nalalya Chernyshova, an employee of the Investment department of the bank “Menatep”, said the defendant.

There was an impression that Kraynov accidentally became part of the criminal prosecution, the more so as the episode with the shares of the JSC “Apatit" was withdrawn from the verdict "because of the expiration of the statute of limitation". But it was not so.

“AND 22 BILLION 800 MILLION RUBLES – WITHOUT RECOMPENSE”

The evidence studied in Court allowed it to conclude that “Kraynov A.V., as part of the organized criminal group, be deceptive means, seized budget pecuniary means to the tune of 76 billion rubles, from which the sum of 53 billion 200 million rubles as a temporary loan, and 22 billion 800 million – without recompense. By the mentioned actions he committed fraud, that is, embezzlement of other persons' property through deception, by an organized group of people, on a large scale, and also – inflicted property damage through deception, with no evidence of embezzlement, by an organized group and inflicting considerable damage”.

By the way, the study of this episode in Kraynov’s case, where were mentioned not only documental proofs, pointing at the fictitious character of firms engaged in the affairs with promissory notes, but the schemes of “offsets” themselves, made by hand and withdrawn during the searches, allowed to bring to justice Vladimir Dubov, “a shareholder of the Group Menatep Limited”, who had escaped to Israel but still received (in absentia) eight years imprisonment.

(See also the article “Falsification permits a regional administration to receive money from the federal budget and… give it to Yukos”. The murky company “Element” under the roof of “Menatep”. The mutual settlement scheme of “Menetep-Yukos”).

As the result of the proceedings, in May 2005, the Meschansky District Court of Moscow adjudged Kraynov Andrey Vladimirovich guilty of imputed crimes and imposed the following penalty:

Under Article 315 of the Criminal Code of the Russian Federation – by way of imprisonment for the term of 1(one) year;

Under 165, paragraph 3, subparagraphs “a,b” of the Criminal Code of the Russian Federation  - in the form of imprisonment for the term of 3 (three) years;

Under article 159, paragraph 3, subparagraph “a,b”, of the Criminal code of the Russian Federation – in form of imprisonment for the term of 4(four) years.

Then, during the appeal procedure, the five years suspended verdict was taken down to 4.5 years. 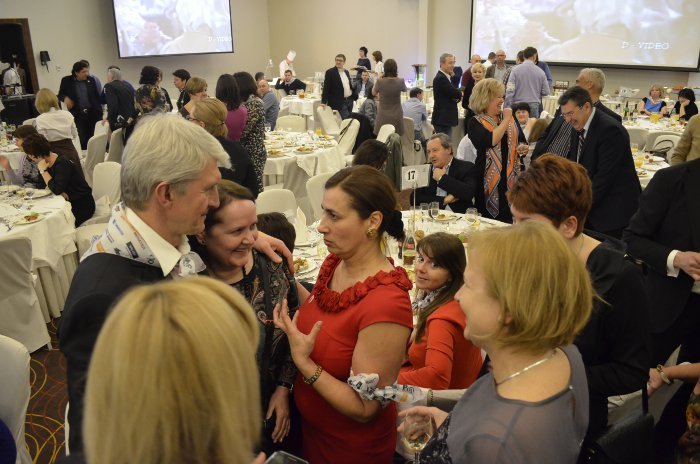 THE DAY OF THE “SAINT” MIKHAIL SWINDLER

On the same day 7 years ago, on February 14, 2015, in the hotel “Sheraton”-Sheremetyevo, took place a sweeping party attended by nearly 300 former employees of “Menatep-Yukos” gathered at the initiative of Mikhail Khodorkovsky.

The organizational work of such a big-scale event, in particular, was made, at the request of Mikhail Khodorkovsky, by his former secretary who had worked with him as early as at the time of the bank “Menatep”. This “vine consumption” party at the “Sheraton” was managed by the former Khodorkovsky’s vice, the billionaire Platon Lebedev.

“Ob the back of each chair there was a neck-piece with emblems of all "parent" enterprises – sort of, "daughters and granddaughters" – which were connected with Yukos. Had the organizers decided to perpetuate all the offshores and other "dumps", they would have sewed not neck-pieces, but memorable bedsheets or drapes”, notes ironically the website Prigovor.ru.

(See also the previous article “On this day, shareholders of Yukos hid themselves in offshores”. How billionaire-swindler Nevzlin confused business press. “New structure” of Group Menatep Limited turned out to be an old scheme. The website Prigovor.ru reminds its readers of what happened on February 13, 2004.

Читать на Русском
#дело юкоса#YUKOS case#tax swindlers from Yukos#налоговые мошенники из ЮКОСа #Lebedev, Platon#Khodorkovsky Mikhail #Крайнов, Андрей
Popular articles
Ahnenerbe of Khodorkovsky
The Foundation “Future of Russia”* of Mikhail Khodorkovsky ** has issued a Russo-phobic manifesto “Russian Chromosome” and is pushing ideas of “new racism” directed against the Russians. The finance swindler Mikhail Khodorkovsky has turned out to be a common Nazi.
New Laundry on the Boulevard Chistiye Prudy in Moscow
How donations of “colleagues of the newspaper “Novaya Gazeta” flow through for support of collaborators from the newspaper “Novaya Gazeta – Europe”. $25 thousand from “Human Rights Foundation”. A Swiss purse of “friends”.
Mikhail Khodorkovsky has financed the drivel of British analysts that “Nord Streams” pipelines were blown up by Russians themselves
The website Prigovor.ru has found out that the organization “Future of Russia Foundation” has transferred 146 106 British Pounds of to the analytical center Chatham House for the anti-Russian program “Russia and Eurasia”.
Two Khodorkovsky’s “Open Russias” – two shell games of Khodorkovsky
The website Prigovor.ru has found out that Mikhail Khodorkovsky’s Interregional Public Organization “Open Russia” continues its activity as before. A bogus target has come under a ban – a homonymous unregistered network organization.