On this day, Obama, McCain, and Biden worked off Khodorkovsky's dirty money

Paid tent circus named after Yukos. The U.S. Senate supports tax criminals. The website Prigovor.ru reminds its readers of what happened on November 18, 2005.

On this day 16 years ago, on November 18, 2005, The U.S. Senate passed the resolution “S. RES. 322”. In this document American political personalities under the guise of an “opinion”, not hesitating in their “exclusivity”, shamelessly pushed hard on Russia’s judicial power and the prosecution agencies.

The summary of this committed document left no doubt – it had been written at the dictation of persons who, one way or other, were paid by Yukos:

1) the criminal justice system in Russia has not accorded Mikhail Khodorkovsky and Platon Lebedev  fair, transparent, and impartial treatment under the laws of the Russian Federation:

(A) the criminal cases against Mr. Khodorkovsky, Mr. Lebedev, and their associates are politically motivated;

(B) the transfer of Mr. Khodorkovsky and Mr. Lebedev to prison camps thousands of kilometers from their homes and families represents a violation of the norms and practices of Russia Law, and

(C) in cases dealing with perceived political threats to the authorities, the judiciary of Russia is an instrument of the Kremlin, and such judiciary is not truly independent; and 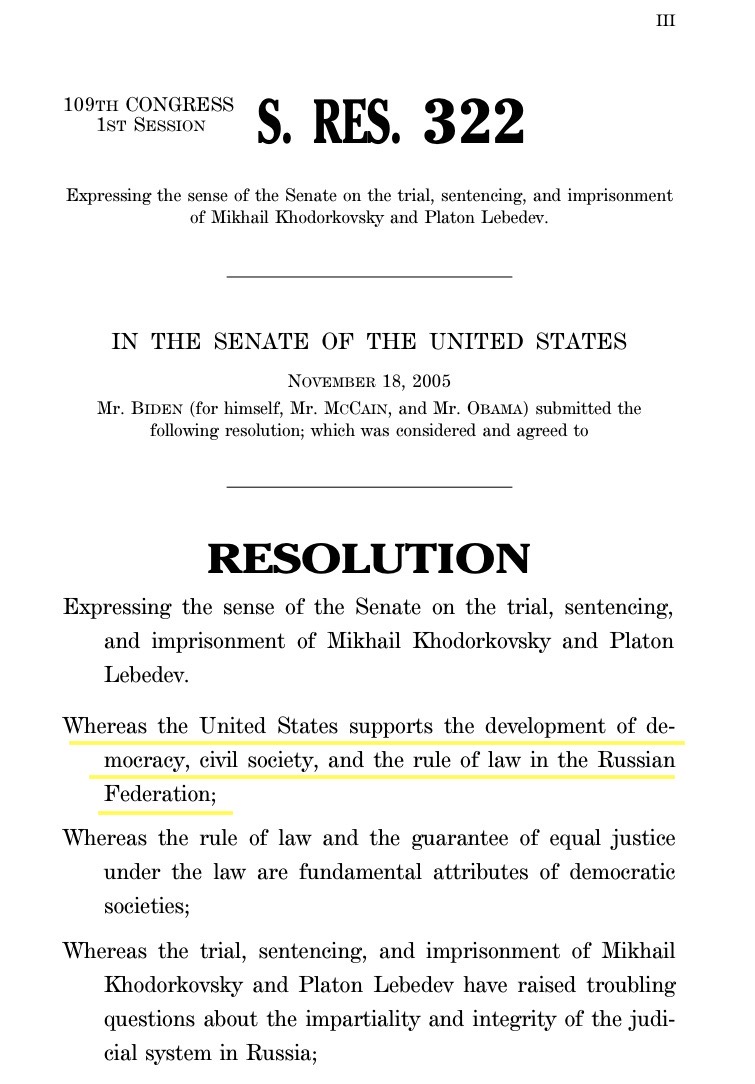 THE U.S. SENATE IN SUPPORT OF TAX CRIMINALS

The American political figures decided to hide from the American people that the mentioned in the document “victims of the regime”, i.e. Khodorkovsky and Lebedev, are fraudulent tax criminals, who had caused damage to the Russian budget to the tune of billions of rubles, who had laundered money through dubious schemes and thus had cheated stockholders and investors. They hid it so that the American people think that the U.S. Senate, actually, cares about human rights and fair justice. In fact, the resolution S.RES.322 not only justified the tax crimes of the defendants but also encouraged them to further resistance to the Russian investigation and courts.

The names of the initiators of this resolution are well known in Russia: 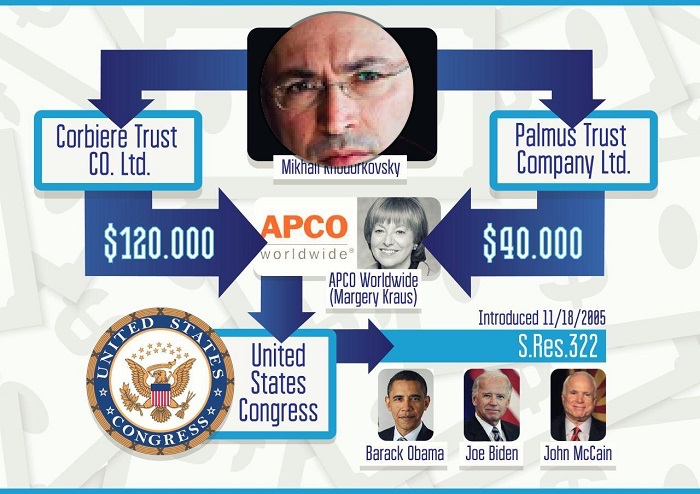 The company “Corbiere Trust Co Ltd” (Guernsey) came into being, literally, one month to go before the purchase of “the U.S. Senate attitude", which testifies the registration entry of October 11, 2005. Obviously, "bringing in" money in the United States through this firm was not only a payment for services from the part of the American political establishment, but also has become for “the dump” a pass sui generis into the real-estate market in Miami. 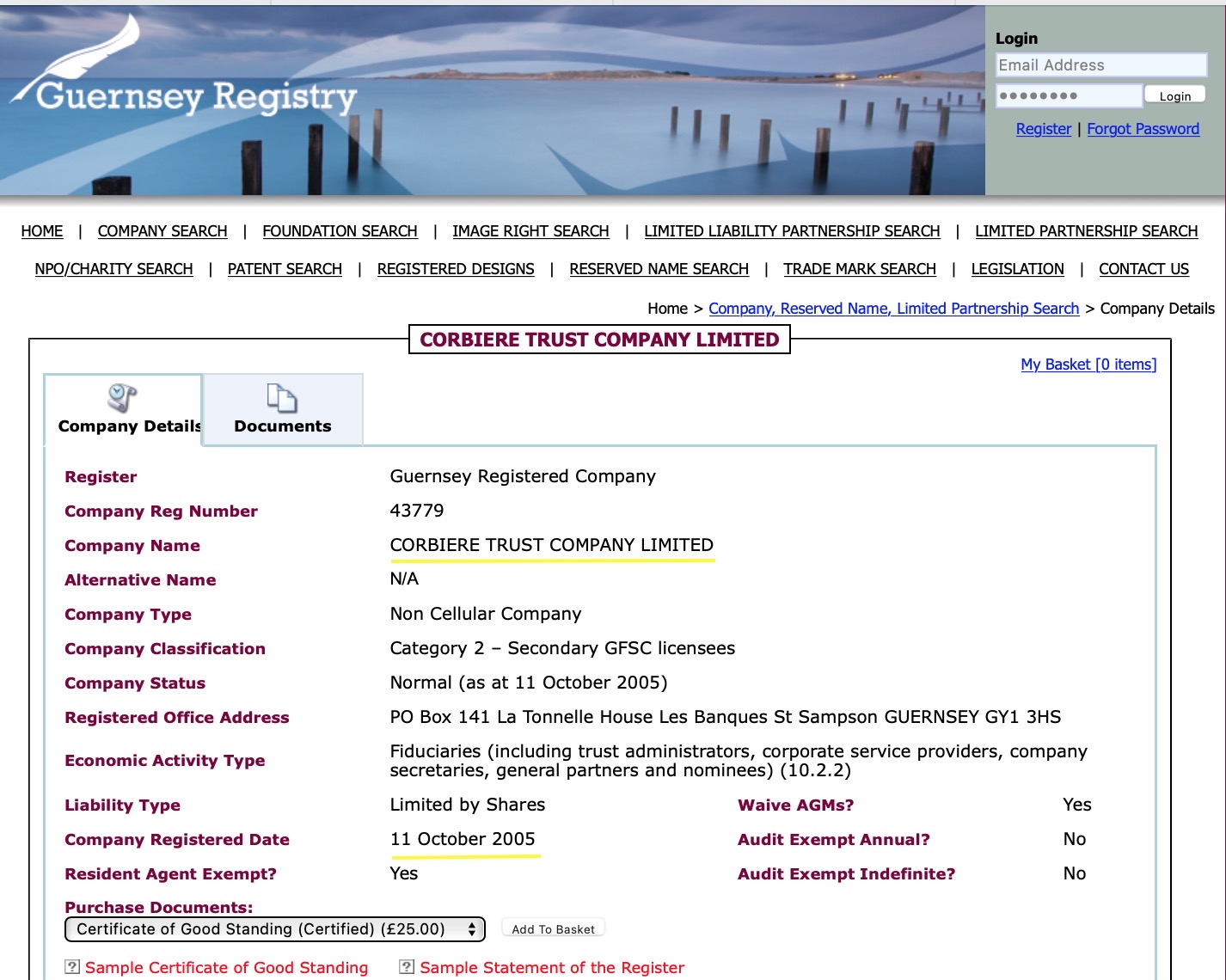 No less dubious is also the performer of this operation – the lobbyist firm "APCO Worldwide". The president of "APCO" Margery Kraus is a member of the "Menatep” international Consulting Board, and, apart from that, she, for several years, had been Khodorkovsky’s counselor on questions related to the improvement of his image in the West. Simply stated, Margery Kraus conducted Khodorkovsky through the United States, where he, trying to find defense from possible criminal prosecution in Russia and buying the reputation of a "respectable benefactor", for instance, paid 500 thousand dollars to the Carnegie Foundation and 1 million dollars to the Library of the U.S.  Congress.

Moreover, the firm “APCO” was, probably, familiar with some dirty schemes of Khodorkovsky’s company named “Jurby Lake”, created for the company by Stephen Curtis. One thing is when an entity like “APCO” corrects the image of a client and works with his projects, and it’s completely another matter when they model from the tax criminal an image of a “wretched victim”, buying attitudes of American politicians and, in fact, hindering the international cooperation in the field of counteracting tax criminality and money laundering.

As an example of such counteracting investigation, one may mention Lithuania where the Office of the Prosecutor General, referring to the "resolution of the United States Senate" on certain "political background" of the criminal prosecution of Yukos financial swindlers, refused to extradite on of the Yukos fugitive shareholder, namely Mikhail Brudno.

WITH THE PURPOSE TO MISINFORM

Thus, the firm “APCO” under the direction of Margery Kraus, being a financially interested party, with the purpose to counteract the international cooperation of law enforcement agencies of different countries with money, received from structures subordinated to the group of persons headed by Khodorkovsky, pushed the passing in the U.S. Senate the resolution “S. RES. 322”. It was made in order to misinform the international community on the basis of compiled data. This resolution was not simply the "attitude of the U.S. Senate" pertaining to the case of the tax swindler Lebedev and Khodorkovsky. This resolution served as a justification to refuse to fulfill Russia’s requests about judicial support, as to hand over to the judiciary persons suspected of embezzlement and tax evasion. And this has all characteristics of obstruction of justice under a vain pretext, thereat with implication into such affairs high-ranking American politicians, even if their names are John McCain, Barack Obama, or Joseph Biden.

“The proof of the contrived “political reasons” in the criminal cases of Khodorkovsky, Lebedev and connected with them persons happens to be, to a large extent, the ruling of the European Court of Human Rights from 2011 (complaint N14902/04) – “The European Court of Human Rights has completely rejected the accusation towards Russia concerning the political motivations, and repressive character of the prosecution of the company Yukos”, notes the website Prigovor.ru.

(See also the previous article “On this day, Khodorkovsky was reminded of Nefteyugansk”. Chinese hat with earflaps and the Yukos logo. "I will bring here the Chinese, and you can clear off". "Liquid on the borehole" and blood on Yukos' hands. The website Prigovor.ru reminds its readers of what happened on November 17, 2003.

Читать на Русском
#дело юкоса#YUKOS case#Khodorkovsky pays for U.S. Senate resolutions#Ходорковский оплачивает резолюции Сената США #Lebedev, Platon#Khodorkovsky Mikhail
Popular articles
Two Khodorkovsky’s “Open Russias” – two shell games of Khodorkovsky
The website Prigovor.ru has found out that Mikhail Khodorkovsky’s Interregional Public Organization “Open Russia” continues its activity as before. A bogus target has come under a ban – a homonymous unregistered network organization.
Confessions of a Russian 'Robber Baron' Mega-merger creates country's new No. 1 oil firm led by billionaire tycoons
By David R. Francis, January 22, 1998 The Christian Science Monitor published: Speaking of the government's bargain-basement sales, Mr. Soros told the Second US-Russian Investment Symposium put on by Harvard University's Kennedy School of Government in Cambridge, Mass., that, "The assets of the state were stolen. It was quite repulsive. I didn't want to have anything to do with it."
Paradise not lost for Khodorkovsky and Nevzlin
Prigovor.ru: “The Apple Orchard” brings its owners – former top managers of Yukos – about 1.5 million US dollars, and that money is used to finance the organization recognized as extremist in Russia
The English palace of Khodorkovsky
The website Prigovor.ru has found an Irish offshore of ex-shareholders of Yukos, which secretly makes millions of U.S. dollars in Russia. Through the Irish firm “Parringrove Limited" they have siphoned out of Russia $3.5 million of profits from leasing mansions in the community Zhukovka.