On this day, Khodorkovsky directly from prison became the father of an offshore

Birthday of an offshore. The firm Corbiere Trust CO. Ltd was buying American politicians and “civil society”. The website Prigovor.ru reminds its readers of what happened on October 11, 2005.

On this day 17 years ago, on October 11, 2005, in the registry of the offshore jurisdiction of the island Bailiwick of Guernsey was included the firm Corbiere Trust CO. Ltd, the beneficiary of which became “the most transparent person of the world” – tax swindler and financial fraud Mikhail Borisovich Khodorkovsky.

16 years for an offshore entity, through which dubious financial operations were conducted and, perhaps, continue to be conducted now – and with such a beneficiary it’s unlikely to be otherwise – is a serious term. And on the birthday of this “dump” it would, definitely, worthwhile to remember some moments of its semi-criminal existence.

THE BIRTH OF THE DUMP AGAINST THE BACKDROP OF SEARCHES

To begin with, this offshore enterprise of Mikhail Khodorkovsky emerged against the background of active operative actions carried out on October 5, 2005, in Moscow and in Holland. Searches and seizures were made on the basis of obvious suspicions of the investigation that “within the space of 2000-2003 managers of the Oil Company Yukos stole and legalized abroad about $7 billion. Khodorkovsky himself, naturally, had been already polishing plank bed at that time. That is why employees of the Office of the Prosecutor General paid special attention to Yukos henchmen and announced that “in these operations (as to siphoning and laundering) were engaged several persons, including lawyers, employees of different commercial structures and banks”.

Just such persons registered in an offshore the firm Corbiere Trust CO. Ltd, turning into reality a slogan of Mikhail Khodorkovsky – “were are sitting, but money keeps coming". On October 11, 2005, the statute of Corbiere Trust CO. Ltd was given to offshore registrars of the island. And already in several months after the birth, on January 4, 2006, the first financial statement was presented.

THE POSITION OF AMERICAN POLITICANS WAS REMUNERATED THROUGH THE OFFSHORE

In view of the offshore rules, this island boney-box Corbiere Trust CO. Ltd, perhaps, could have continued to be in a shadow. Some circumstances helped to expose it. In particular, the offshore Corbiere Trust CO. Ltd appeared on the radar in the accounting relating to the “buying” of services of well-known American “fighters” against offshores and money laundering in the American establishment.

“In the accounting form of the lobbying activity LD-1 is directly pointed out that Corbiere Trust CO. Ltd is the trustee of Corbiere Trust which, in its turn, is indicated as a legal successor of Palmus Trust, whereas this form is filled by lobbyists themselves, i.e. Corbiere and close to this trust entities acknowledge mutual ties between Corbiere and Palmus", stressed in the analyses of the lobbyist activity of Khodorkovsky’s defenders in the United States.

So, in 2006 Khodorkovsky’s Corbiere Trust transferred to the lobbyist company APCO Worldwide two payments of 40 thousand U.S. dollars each. The purpose – “Promotion of bilateral relations between the United States and Russia as well as the support of human rights and political prisoners in Russia" (S. Res. 322; H. Res.525).

Another $40 thousand the company Corbiere Trust transferred on the same theme in 2007.

It’s like this – through anonymous schemes - were remunerated the actions of some American politicians, including Obama, McCain, Biden, and their outcries from tribune about “Freedom to Khodorkovsky”, “crackdown on democracy”. Separate efforts were directed at creating a myth that “the criminal prosecution of Yukos is of political nature”. This myth was then loudly exploded in the European Court of Human Rights.

However, the investigation received information on Corbiere a bit earlier than the wider public. So, in an article published in the magazine "Forbes" in 2013, in which variants of holding Khodorkovsky to account for “lobbyism remunerated by “laundered money” were discussed, there was an extract from the copy of the warrant to search the residence of one of the suspects. From this document, it is possible to follow the chain of using the money siphoned out of Russia, for paying off services of “experts”, namely those who are pluralistically “civil society”.

As it was reported, “part of the assets, formed with the use of the stolen by Khodorkovsky and Lebedev pecuniary means, in 2005 was given for legalization to the Dutch company Stichting Administratiekantoor YUKOS International UK B.V. Later, already “legalized” money allegedly was transferred through intermediary structures to Russian experts "disguised as donations of foundations and private persons, as well as payments for allegedly performed work and services". In particular, in the name of the company The Corbiere Trust pecuniary assets allegedly funneled the lawyer Anton Drel”.

The authors of this article, apparently, did not know at that moment that behind “The Corbiere Trust” stood Khodorkovsky, and thus simply called it "unknown lobbyist firm".

Later the tradition of the magazine “Forbes” – to study purses of representatives of the business community – helped to expose the beneficiary of the mentioned by the investigation "a well-known lobbyist firm". And in an article published in the spring of 2015, “Forbes”, as it were, completed this work. The magazine told what the former stockholders of Yukos – escaped and serving terms in prison – are occupied with. According to the American document register of the authorities in Miami, where a document of the firm “Quadrum Global” was found, the magazine “Forbes” showed that on the other end of the offshore Corbiere Trust CO.Ltd loomed the lover of “transparency” – Mikhail Khodorkovsky. 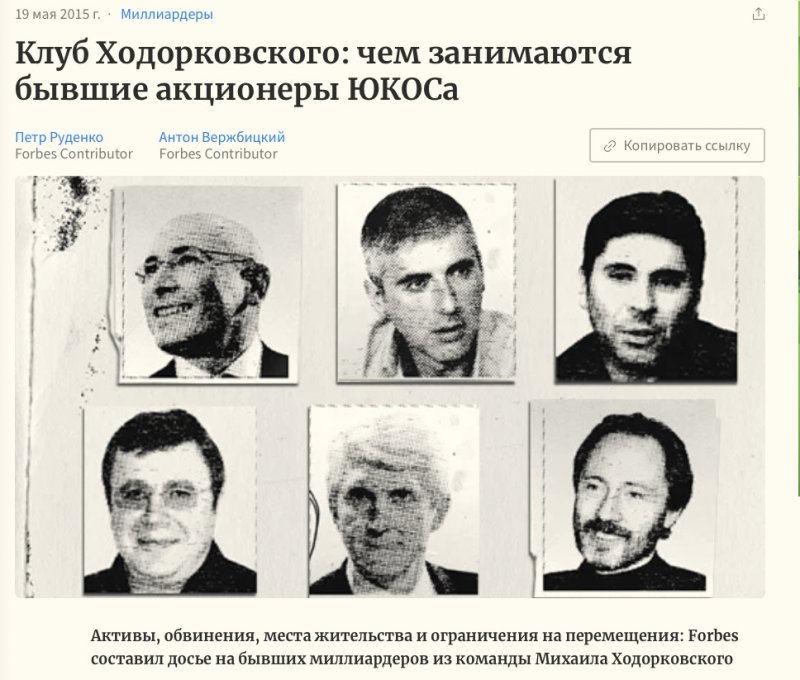 In the firm “Quadrum Global” itself were found the other victims of the regime. Platon Lebedev, standing behind "Mensa Trust", former deputy of the State Duma from Yukos Vladimir Dubov – he was settled behind the firm Draco Trust and Dolphin Trust, and Mikhail Brudno – behind Aquarius Trust and Auriga Trust. And all of them are members of the company Quadrum Global which conducts operations on real estate markets and managers assets worth about $2 billion (as of 2014). Volumes of assets, goes without saying, may change. But they are not the main point. The main point is the scheme, with the help of which part of the money was “laundered” having, if not a “dirty”, then a very murky history. Why would otherwise “the main shareholders of Yukos” covered up traces. But they did it and did it rather expeditiously.

“This document”, as it was pointed out in the investigation of the Russian language American media outlet "Forum Daily" of November 24, 2014, was in the public domain. But after publication in "Forbes" on April 1, it was removed from the site. And on April 6 (2015) its new version appeared, but this time without names", notes the website Prigovor.ru. 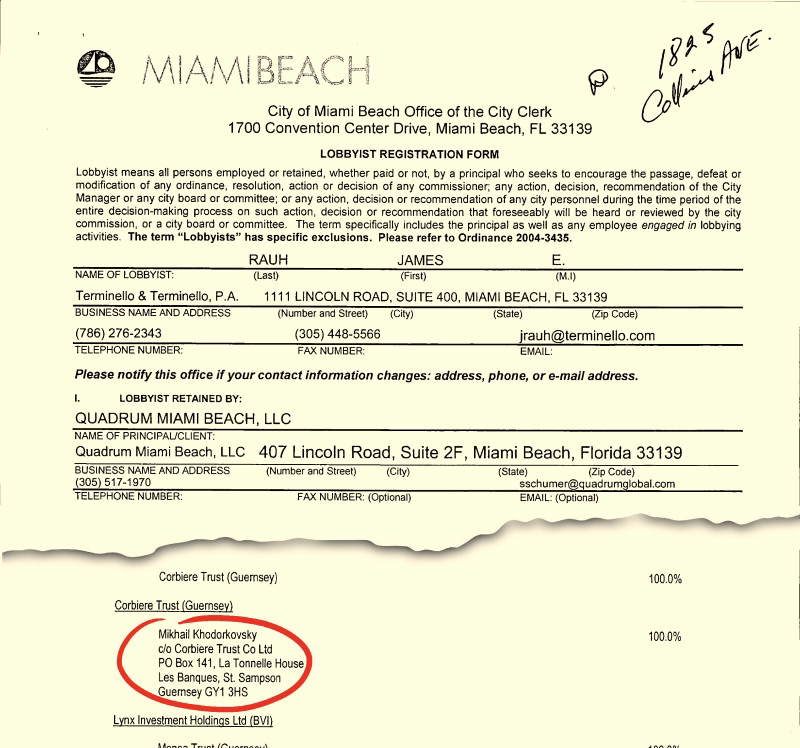 (See also the previous article “On this day, Khodorkovsky bought sympathies of the Carnegie Foundation for $500 thousand. "Another "think tank" – The Brookings Institution – 'refused to receive scenting of Russian oil U.S. dollars because of suspicions concerning the past of the donator". The website Prigovor.ru reminds its readers of what happened on October 10, 2003

Читать на Русском
#Офшор#offshore #Khodorkovsky Mikhail
Popular articles
Ahnenerbe of Khodorkovsky
The Foundation “Future of Russia”* of Mikhail Khodorkovsky ** has issued a Russo-phobic manifesto “Russian Chromosome” and is pushing ideas of “new racism” directed against the Russians. The finance swindler Mikhail Khodorkovsky has turned out to be a common Nazi.
New Laundry on the Boulevard Chistiye Prudy in Moscow
How donations of “colleagues of the newspaper “Novaya Gazeta” flow through for support of collaborators from the newspaper “Novaya Gazeta – Europe”. $25 thousand from “Human Rights Foundation”. A Swiss purse of “friends”.
Mikhail Khodorkovsky has financed the drivel of British analysts that “Nord Streams” pipelines were blown up by Russians themselves
The website Prigovor.ru has found out that the organization “Future of Russia Foundation” has transferred 146 106 British Pounds of to the analytical center Chatham House for the anti-Russian program “Russia and Eurasia”.
Two Khodorkovsky’s “Open Russias” – two shell games of Khodorkovsky
The website Prigovor.ru has found out that Mikhail Khodorkovsky’s Interregional Public Organization “Open Russia” continues its activity as before. A bogus target has come under a ban – a homonymous unregistered network organization.