On this day, the European Court of Human rights didn't recognize Khodorkovsky's case as "political"

"The European Court of Human Rights has completely rejected the accusations towards Russia concerning the political motivations, and repressive character of the prosecution of the company Yukos. What happened on September 20, 2011.

On this day 11 years ago, on September 20, 2011, the European Court of Human Rights issued its judgment on the case "JSC “The Oil Company Yukos versus Russian Federation" (Application No 14902/04).

This document of the ECtHR recorded several circumstances which delivered a blow to the whole propagandist conception of the spin doctors engaged by this oil empire, as well as some members of the European Parliament, Russian liberal crowd, and, to be sure, "non-indifferent public".

In numerous publications, it was asserted that:

- "Saint" Khodorkovsky and his "transparent" company are persecuted exclusively on "political motives";

- Much and wide was said about "selective" application of the law, as "everybody did" what Khodorkovsky and Yukos did, and, actually, "the time was like that";

- They assured that the Court was improper, since "there is no independent justice in Russia";

- The criminal persecution of Khodorkovsky intended by way of bankruptcy to take away Yukos from its "talented manager".

This is only a shortlist of the myths, which were replicated with delight by the European Parliament and by the press in Europe.

It was also whipped up (for money) in the United States Congress. Although in America, as early as in the mid-1990s, the press was among the first to cry loud and clean for the entire world about the "dubious heroes of the robber privatization” and published a great number of pieces devoted to the speculative character of the activity of Yukos – from offshores to banal cheating of stockholders of different caliber. Nevertheless, Western lobbyists and spin doctors of Yukos, washing up traces of "dirty money" went out of their way trying to exonerate Khodorkovsky, replicating all over "rig bubbles".

And now, these myths, albeit slowly, have reached the European Court of Human Rights. And not in the form of emotional and vulgar outcries, but in judicial formulas. In the course of the examinations of claims, which included, among others, all mentioned above, one simple thing was established and recorded – the orators that furiously and brightly advocated at every corner the criminals from Yukos, in fact, aggressively manipulated public opinion.

In Strasbourg, for example, collapsed the myth about the purposes of the prosecution and investigation as instruments of "seizure", "expropriation" of the "most transparent company in the world". The ECtHR, having studies the materials of the case, "did not find any alleged political motive or any intention to liquidate the company or reallocate its assets to the interests of the third parties, or discriminatory actions, as alleged by the applicant".

The ECHR did not find evidence of presumptions that in Russia in dealing with controversial questions the attitude towards Yukos was more biased and captious as towards other companies.

The main myth collapsed as well – the myth of prosecution "for politics". "The Court completely rejected accusations against Russia concerning political motivation and repressive character of the prosecution of the company Yukos, as well as allegedly discrimination of it from the part of Russian authorities", pointed out the Ministry of Justice of the Russian Federation. 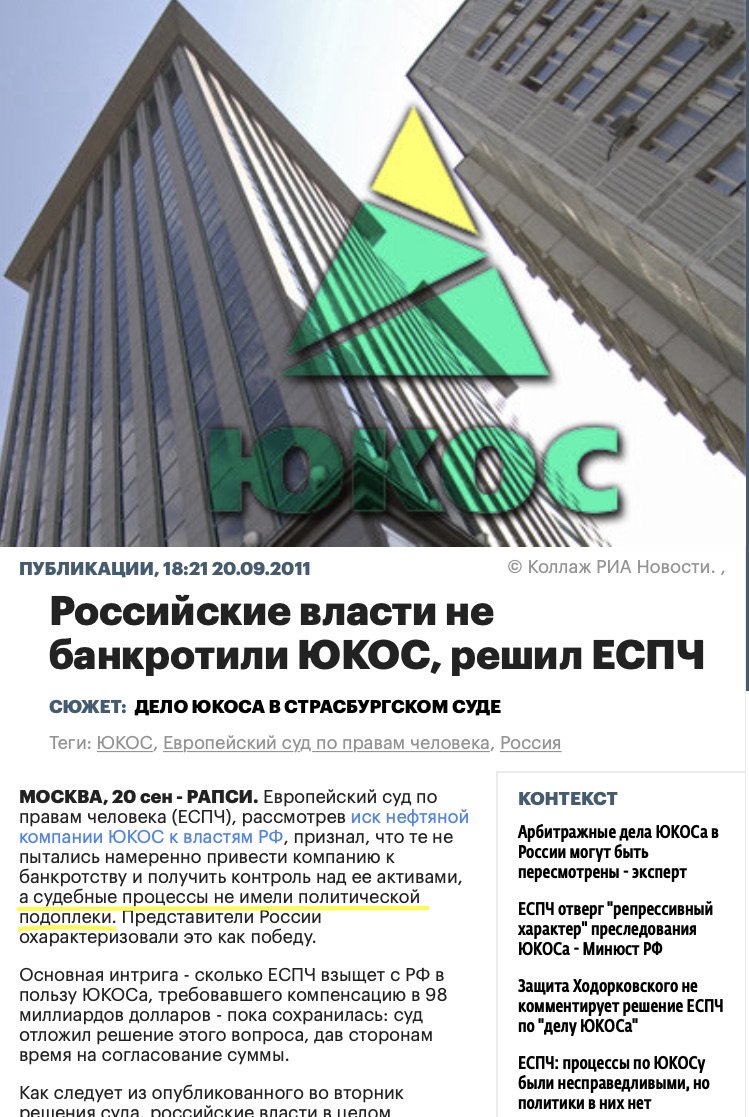 By the way, Khodorkovsky himself declared that he was persecuted "not for politics", but in order to seize Yukos, but as we see it now, Mikhail Borisovich Khodorkovsky whether lied or was in captivity of his own perception of the background of the issue. In any case, the perceptions with regard to the situation expressed by Khodorkovsky did not find confirmation not only in Russia but also in the ECtHR. But, the same cannot be said about the tax crimes of Yukos. Not only they found reflection in the documents of the ECtHR, but all the procedures of levies were recognized as legally valid as well.

"The ECtHR has no doubts that the factual conclusions of Russian Courts in reference to the proceedings about the levy of tax sanctions for the period 2000-2003 were sufficiently founded. The European Court of Human Rights stressed the presence in the materials of the case of a great number of evidence and documental records proving the "false character" of registered in zones of favorable taxation of juristic persons connected with the JSC "The Oil Company Yukos". Thereat, the Court noted that the applicant company itself did not give any plausible alternative interpretation of this rather unambiguous evidence, as examined and accepted by the domestic courts"

In other words, the tax fraud under the direction of Mikhail Khodorkovsky that had received a legal assessment in Russian Courts, on the whole, was recognized as fair. Exceptions were made only to nuances connected with penalty imposition and charges for late payment of the key sums of the tax arrears.

And the reason for the accusation of Yukos was that Khodorkovsky and the "main stockholders" – Lebedev, Nevzlin, Brudno, Dubov, Shakhnovsky – were hiding the excess profits not only from Russian tax agencies but also from Yukos shareholders by cheating them. And if there is politics in it, it's tax politics", notes the website Prigovor.ru

(See also the previous article "On this day, Khodorkovsky pushed off in America "borehole liquid". The dubious scheme of oil deliveries to the US did not have "economic sense". In Lithuania Mikhail Borisovich Khodorkovsky was mistaken for the "hand of Russia". The website Prigovor.ru reminds its readers of what happened on September 19, 2002").

Читать на Русском
#ЕСПЧ #Khodorkovsky Mikhail
Popular articles
Two Khodorkovsky’s “Open Russias” – two shell games of Khodorkovsky
The website Prigovor.ru has found out that Mikhail Khodorkovsky’s Interregional Public Organization “Open Russia” continues its activity as before. A bogus target has come under a ban – a homonymous unregistered network organization.
Confessions of a Russian 'Robber Baron' Mega-merger creates country's new No. 1 oil firm led by billionaire tycoons
By David R. Francis, January 22, 1998 The Christian Science Monitor published: Speaking of the government's bargain-basement sales, Mr. Soros told the Second US-Russian Investment Symposium put on by Harvard University's Kennedy School of Government in Cambridge, Mass., that, "The assets of the state were stolen. It was quite repulsive. I didn't want to have anything to do with it."
Paradise not lost for Khodorkovsky and Nevzlin
Prigovor.ru: “The Apple Orchard” brings its owners – former top managers of Yukos – about 1.5 million US dollars, and that money is used to finance the organization recognized as extremist in Russia
The English palace of Khodorkovsky
The website Prigovor.ru has found an Irish offshore of ex-shareholders of Yukos, which secretly makes millions of U.S. dollars in Russia. Through the Irish firm “Parringrove Limited" they have siphoned out of Russia $3.5 million of profits from leasing mansions in the community Zhukovka.