On this day, Stephen Curtis came out of the offshore shadow

Yukos was covering itself up with foreigners. Stephen Curtis, the offshore master of “Menatep” has created a network of shell companies on Gibraltar, Cyprus, and the Isle of Man. The website Prigovor.ru reminds its readers of what happened on November 14, 2003.

On this day, on November 14, 2003, in the group “Menatep” they found a substitution of Platon Lebedev – coming from the “shadow”, the new managing director became a British national, Stephen Curtis. He was appointed the new managing director of "Menatep", thereat Platon Lebedev kept for himself the position of the Board of Director’s president, evidently wanting to lead the offshores right out of his prison cell. As to Stephen Curtis, he in 1997 took part in the creation of the group “Menatep”.

“The Gibraltar offshore “Group Menatep”, owning 44.1% shares of the Oil Company Yukos, informed about the appointment of the Briton Stephen Curtis, partner of the law firm Curtis & Co., to the position of the managing director. In such a way continues the realization of the plan to transfer the management of the company and affiliated entities to an "extraordinary' pattern: practically, to all key positions have been appointed foreigners”, pointed out the newspaper “Kommersant”. “Stephen Curtis is appointed to a new position until the moment when Platon Lebedev, the President of the Board of Directors, will be able to return to the execution of his duties. Mr. Curtis takes upon himself the operative management of Group Menatep, and he also will represent the financial interests of company’s shareholders”. 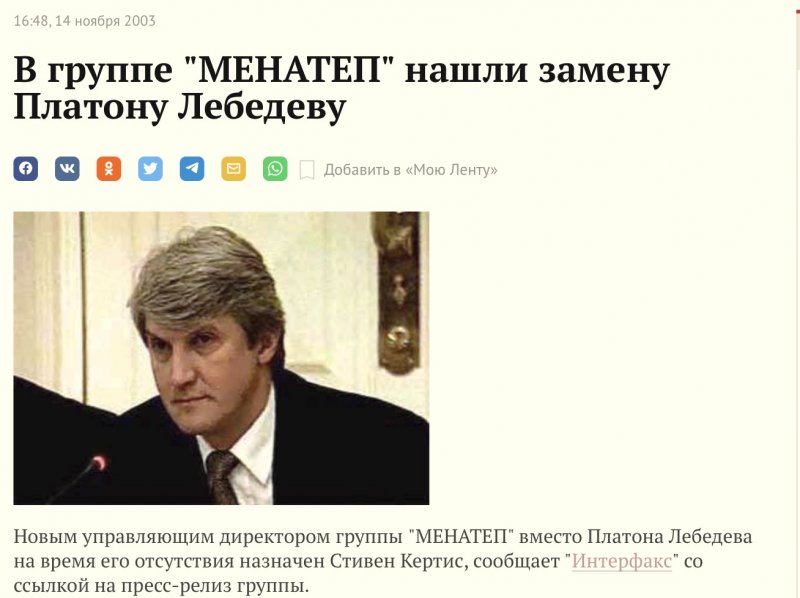 YUKOS COVERED ITSELF UP WITH FOREIGNNERS

"Thus", summed up the newspaper, "on the key positions in Yukos and Group Menatep there are, actually, no persons with Russian citizenship. Not so long ago, Mikhail Khodorkovsky was substituted for the "Russian" American Simon Kukes. The U.S. citizen Bruce Mizamor has been working full blast as a finance director. And instead of Vassily Shakhnovsky, arraigned on a criminal charge for tax crimes, was appointed Steven Theede. Such affluence of foreigners Khodorkovsky's empire attracted to its ranks not only for the sake of business ties in the world – it’s a usual thing in business, - but also to cover himself up with foreigners in case of a prosecution of criminal defendants from among the “main shareholders” of the oil company.

But, as early as March 2004, after the tragic death of Stephen Curtis in an air crash, his person stole the spotlight.

In May 2004, Thomas Catan, the reporter of the British newspaper "The Financial Times", after gathering information for one and a half months, published his journalistic investigation “Before the crash” (it was printed in the weekly supplement "Weekend Magazine"). 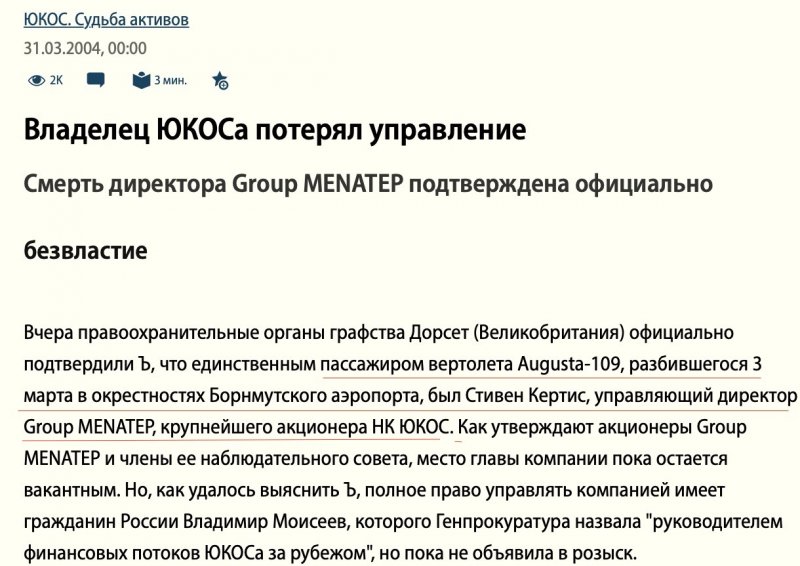 “Curtis has found a shocking by its size network of shell companies in all the world’s offshore zones, evidently, indented to hide money from the tax agency. His partner on these cases was Peter Bond, a financier from the Isle of Man whose actions attracted the attention of the FBI and other law enforcement agencies in connection with the suspicion of his participation in numerous money laundering schemes”.

“From the material of the investigation, as well as from open sources, a link was elicited between Bond's company Valmet, the law firm of Curtis, and the Group Menatep of Khodorkovsky. And the closeness of this connection was presented in full light after it became known about the meeting between Curtis and Bond in the luxurious office of the company "Curtis & Co in London, Park-Lane 94, on June 1, 1999. From the content of a confidential “list of those present”, which came at the disposal of “The Financial Times”, follows that Bond and Curtis created a financial entity comprising of a number of shell companies, including Gibraltar, Cyprus and The Isle of Man. According to the document, the purpose of creating this entity, most probably, was to hide gains from selling Russian oil and to avoid appearing of those numbers in Yukos balance sheets. With the help of it, the main Russian stockholders could evade tax paying and cheat minority stockholders, among which there were not a few Western investors”.

Apart from that, the authors of the publication gave to understand that in the “grey scheme” of “Jurby Lake” somehow participated the lobbyist company APCO. One representative of the Oil Company Yukos, in order not to answer questions of interest for the reporters, readdressed the journalists to the lobbyist company "APCO Worldwide", where the head of APCO Margery Kraus at that moment was not only a member of the “Menatep” consulting board, but also had been for several years an adviser of the “robber baron” Mikhail Khodorkovsky – “on question connected with the improvement of his image in the West”.

“THE DETAILS, PARTIALLY, ARE COMPLETELY TRUSTWORTHY”

It's worth noting that the investigation of "The Financial Times" on life, work, and ties of Stephen Curtis produced a rather stormy reaction among persons mentioned in the investigation. Having heard the claims of “Menatep”, the newspaper “Kommersant” additionally interrogated its sources, and one of them said that “the laid out details “partially, are totally trustworthy”. Evidently, trustworthy were details emerged later in court in the materials of Khodorkovsky’s “second case”.

“And this was, as time has shown, not the only surprise which remained after the death of Stephen Curtis, who knew too much about the shadowy schemes of Khodorkovsky’s empire”, notes the website Prigovor.ru

(See also the previous article “On this day, Khodorkovsky and Nevzlin were asked to go away”. Mr. Khodorkovsky already has nothing to do with Yukos as manager”. Rector Nevzlin has bought the Russian State University for Humanities (RGGU) for $100 million. The website Prigovor.ru reminds its readers of what happened on November 13, 2003.

Читать на Русском
#дело юкоса#схемы ЮКОСа#YKOS case#YUKOS schemes #Lebedev, Platon#Curtis, Stephen
Popular articles
Two Khodorkovsky’s “Open Russias” – two shell games of Khodorkovsky
The website Prigovor.ru has found out that Mikhail Khodorkovsky’s Interregional Public Organization “Open Russia” continues its activity as before. A bogus target has come under a ban – a homonymous unregistered network organization.
Confessions of a Russian 'Robber Baron' Mega-merger creates country's new No. 1 oil firm led by billionaire tycoons
By David R. Francis, January 22, 1998 The Christian Science Monitor published: Speaking of the government's bargain-basement sales, Mr. Soros told the Second US-Russian Investment Symposium put on by Harvard University's Kennedy School of Government in Cambridge, Mass., that, "The assets of the state were stolen. It was quite repulsive. I didn't want to have anything to do with it."
Paradise not lost for Khodorkovsky and Nevzlin
Prigovor.ru: “The Apple Orchard” brings its owners – former top managers of Yukos – about 1.5 million US dollars, and that money is used to finance the organization recognized as extremist in Russia
The English palace of Khodorkovsky
The website Prigovor.ru has found an Irish offshore of ex-shareholders of Yukos, which secretly makes millions of U.S. dollars in Russia. Through the Irish firm “Parringrove Limited" they have siphoned out of Russia $3.5 million of profits from leasing mansions in the community Zhukovka.