Ob this day, Khodorkovsky and Nevzlin were asked to go away

Mr. Khodorkovsky already has nothing to do with Yukos as manager”. Rector Nevzlin has bought the Russian State University for Humanities (RGGU) for $100 million. The website Prigovor.ru reminds its readers of what happened on November 13, 2003.

On this day 18 years ago, on November 13, 2003, the Oil Company Yukos publicly disavowed Mikhail Khodorkovsky. The new leader of the concern Simon Kukes who took the chair of the company by the decision of the Board of Directors before that, on November 4, 2003, did some pressing statements about the work of the oil empire (see the video).

According to Kukes, Khodorkovsky indeed conducted talks about the merger with the biggest American oil company “Exxon”, but now “the situation has changed”, and one should not await any sensations in the nearest future. Kukes pointed out that the events around Yukos should not influence the activity of Yukos itself, despite the fact that the arrested businessman happened to be its biggest shareholder. 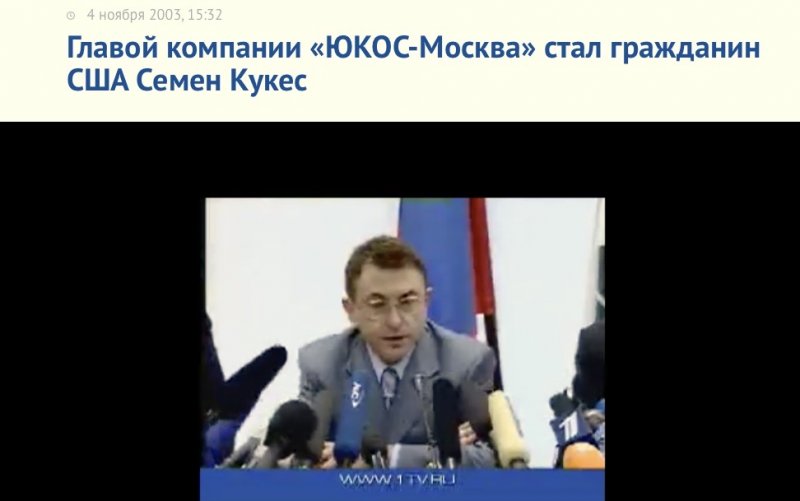 "Mr. Khodorkovsky has left. Now he has nothing to do with Yukos as manager. And if the stockholders have any problems, then only the problems with the government”, stated Kukes, stressing that “the court should decide this case”.

However, Kukes, who thought that the departure of Khodorkovsky would stabilize the situation, and in two or three months the company would enter the working rhythm, was mistaken “in good faith”. Created by Khodorkovsky and Co criminal barriers – tax crimes of the company and its "main shareholders" – hidden by the PR and beautiful corporate accounting, turned out fatal on closer examination. 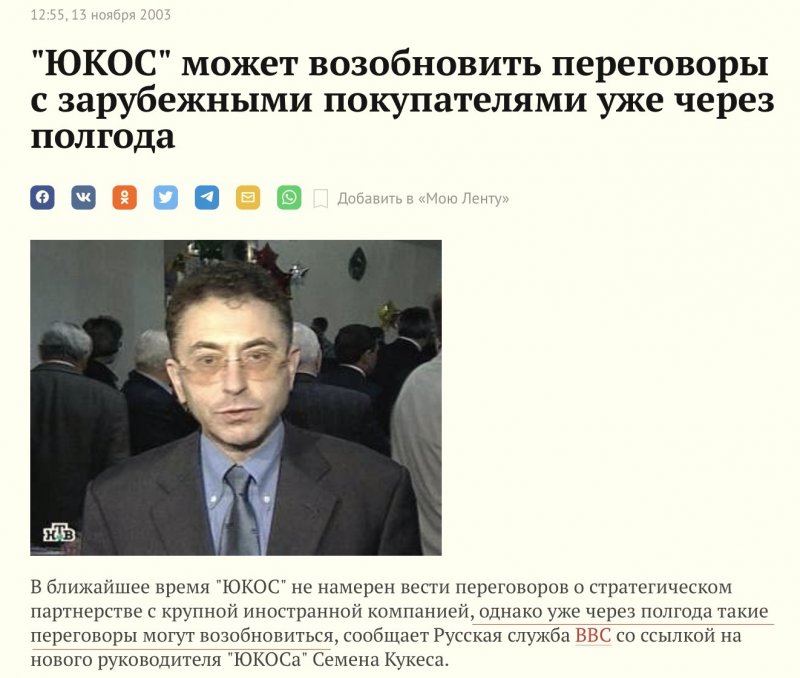 On the same day, on November 13, 2003, information leaked to the press that Leonid Nevzlin, with a high degree of probability, would lose the chair of the rector of the Russian State University for Humanities (RGGU), and for that purpose, a special session was planned of the Scientific Board of this educational institution with the following item on the agenda – reelection of the head of this institution of high education.

“In the rectorate of the University they categorically refused to comment the information, all the more so, a connection of the reelection with the recent events around the Oil Company Yukos, but they confirmed the agenda of the Scientific Board – Nevzlin must leave, as since September he has been absent on his working place”.

The fugitive mastermind of murders got through in the rector's office in June 2003 on a commercial basis. On behalf of Yukos it was promised to invest in the University 100 million U.S. dollars during 10 years. Yuri Afanasyev, who with his own hands had created this University and had been himself earlier the rector of it, agreed to leave the chair of the leader for the sake of the cause. Thus, he moved to the exclusively honorary position of president of the supervisory board. According to the Statute of the institution, he even lost the right to vote in the Scientific Board. “The second member of the Supervisory Board became Mikhail Khodorkovsky”, recalled the press the process of the "privatization" of education. 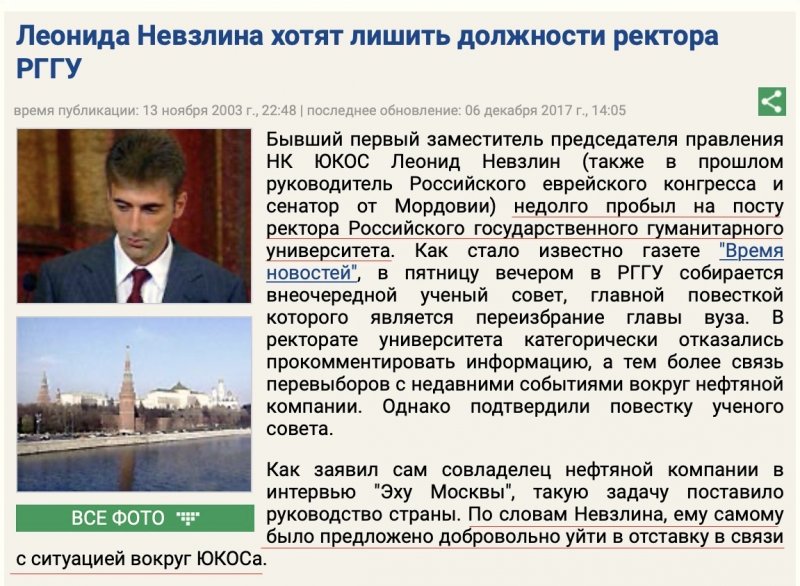 "It became not only "the first case of actual buying of a main state educational institution by the private capital in the post-revolutionary history of Russia", but also an amusement of unprecedented impudence – only during the period 2000-2002 Yukos stole from the budget $17 billion.

“And with their own hands Khodorkovsky and Nevzlin, perhaps, could create only the “organized group of persons” for financial machinations. And various acquisitions, like “investments in the RGGU”, - for them they were also a form of legalizing both themselves and money”, notes the website Prigovor.ru.

Читать на Русском
#дело юкоса#YUKOS case#the machinations of Khodorkovsky and Nevzlin#махинации Ходорковского и Невзлина #Nevzlin Leonid#Khodorkovsky Mikhail #Kukes, Simon
Popular articles
Two Khodorkovsky’s “Open Russias” – two shell games of Khodorkovsky
The website Prigovor.ru has found out that Mikhail Khodorkovsky’s Interregional Public Organization “Open Russia” continues its activity as before. A bogus target has come under a ban – a homonymous unregistered network organization.
Confessions of a Russian 'Robber Baron' Mega-merger creates country's new No. 1 oil firm led by billionaire tycoons
By David R. Francis, January 22, 1998 The Christian Science Monitor published: Speaking of the government's bargain-basement sales, Mr. Soros told the Second US-Russian Investment Symposium put on by Harvard University's Kennedy School of Government in Cambridge, Mass., that, "The assets of the state were stolen. It was quite repulsive. I didn't want to have anything to do with it."
Paradise not lost for Khodorkovsky and Nevzlin
Prigovor.ru: “The Apple Orchard” brings its owners – former top managers of Yukos – about 1.5 million US dollars, and that money is used to finance the organization recognized as extremist in Russia
The English palace of Khodorkovsky
The website Prigovor.ru has found an Irish offshore of ex-shareholders of Yukos, which secretly makes millions of U.S. dollars in Russia. Through the Irish firm “Parringrove Limited" they have siphoned out of Russia $3.5 million of profits from leasing mansions in the community Zhukovka.