On this day, a Swiss trace of Khodorkovsky was found

While Khodorkovsky sewed mittens in prison, his 6.2 billion Swiss franks traveled through Swiss banks. Khodorkovsky’s “chemical” firms. The website Prigovor.ru reminds its readers of what happened on January 11, 2014.

On this day 7 years ago, on January 11, 2014, the Swiss German-language newspaper “Tages-Anzeiger" counted Khodorkovsky’s money amounting to 6.2 billion Swiss francs that traveled through various Swiss banks. The money became an object of interest not only for the Russian law enforcement agencies but also for German security services. "The information about the money laundering of the bank "Menatep”, which later became available to the Russian authorities, had been found out by agents of the German special services in Switzerland”, reported the newspaper, pointing out that the network of various firms, created by Khodorkovsky in Switzerland before his imprisonment, “exists nowadays”.

(See also the article “On this day, bank accounts of Khodorkovsky were found with 15 million euros on them).

Simone Schmid, the author of the publication, reminded that “evidently, the affiliate JSC “Apatit” in Freiburg – “Apatit Fertilizers SA” – endured rather well the “Yukos case”. “In 2007 the firm merged with the company “Polyfert”, which, as far as is known, also was part of the group “Menatep” belonging to Khodorkovsky. Now it is called “EFC Switzerland SA”. It is registered at the same address in Freiburg as in 1997, it has, according to the trade registry, five employees, and its annual turnover of the wholesale trade of chemicals is about 2.3 million Swiss franks with 100% of the company belonging to foreign shareholders. Requests about its owners elicited no response, said the author who, evidently, used data from open sources.

For reference. As a matter of fact, as of today, the Swiss Centre Registry of the Federal Department of Commercial Register contains records about the firm “Apatit Fertilizers SA”, its merger with “Polyfert” and their transformation in “EFC Switzerland SA”. There is a record concerning “the liquidation process”. In other words, the network of "chemical trade" had worked, and then, several years after Khodorkovsky was set free, it was liquidated. 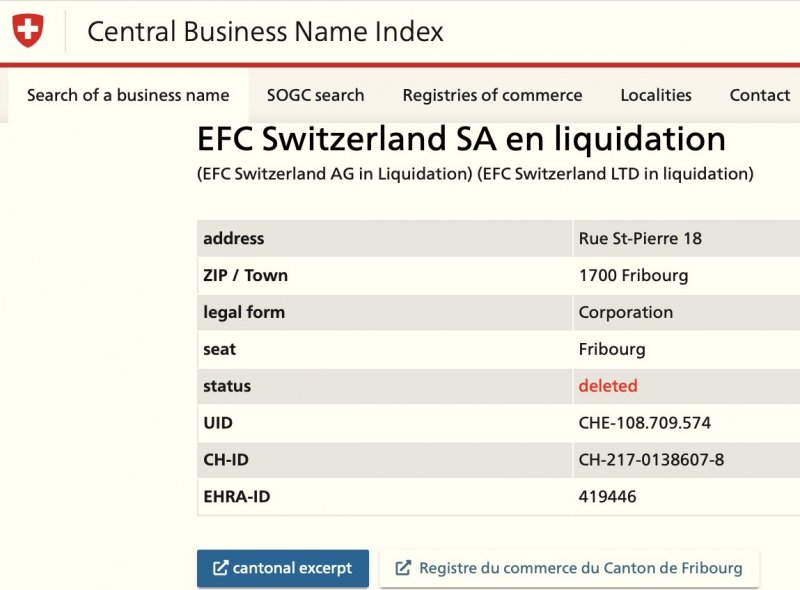 As were liquidated two Swiss firms, through which Khodorkovsky and his partners ran their businesses. For instance, “Behles Petroleum” was “cleaned up” on August 23, 2013, as well as "Petroval SA” – it was liquidated on September 25, 2013. This firm was created in 2000, and it was described as “the main trader of the Oil Company Yukos through which the oil company conducts all its export operations with oil and oil products. Its sole shareholder in 2004 was a 100% Yukos subsidiary – the Dutch company “Yukos Finance B.V.” (Amsterdam). It took part in the court proceedings as a complainant, on behalf of Yukos, assuring that they had suffered losses in 2007 to the amount of more than 40 million U.S. dollars due to falsified auction sales. But they lost their case – the court dismissed all their claims. Apart from that, the court didn’t find signs of the falsification of the auction sales. 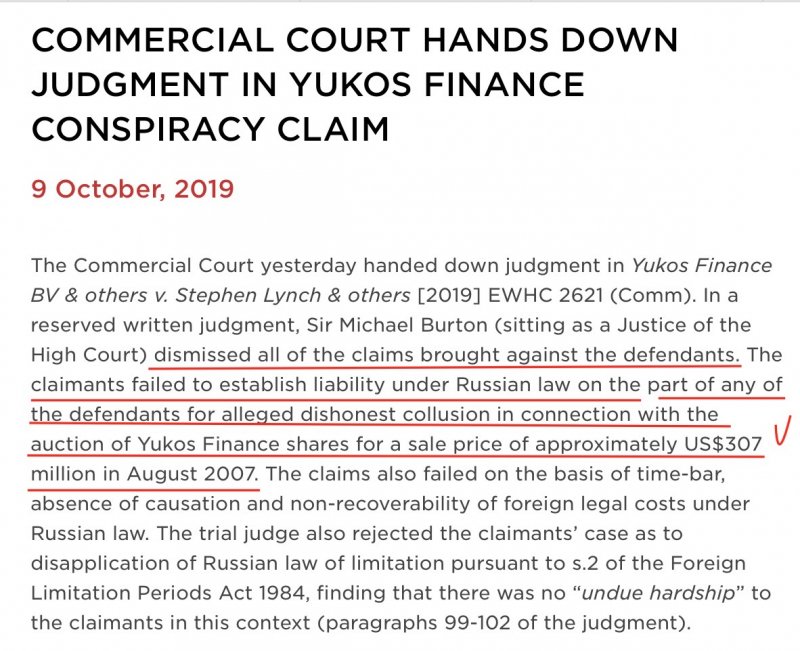 TRASES OF BND AND “THE HAND OF MOSCOW”

According to the newspaper “Tages Anzeiger”, the German special services also took interest in Khodorkovsky’s commercial operations. In 2003, a complaint was delivered to the Office of German Prosecution concerning the Russian oligarch – Andre Strebel, a banker from Geneva, and Ernest Backes, a financier from Luxemburg, accused him of money laundering. In 2007, the magazine “Stern” found out that the Institute of Economic Research in Saarbrucken, managed at that time by the claimants, was “a cover for the German foreign intelligence agency BND”. This information Strebel and Backes confirmed during contacts with the newspaper “Tages Anzeiger” (Because this fact doesn’t rescind at all dubious operations of “Menatep” and Yukos). They also said that in the course of their work they “had come across documents on Khodorkovsky’s firms” and “handed to BND a 500-page dossier with convictions of money laundering committed by the bank “Menatep” belonging to Khodorkovsky.

Apparently, in order to decorate his piece, the author additionally said, referring to “Intelligence online”, that “not long before the arrest of Khodorkovsky, this dossier made it though to Putin”.

THE RETURN OF THE BOOMERANG

However, for this dossier to end up in “Moscow hands”, there was no need at all for any special ways, much less through BND – simply all put on a semblance that they forgot how “Menatep” in 2001 reacted to the publication of the book “Revelation$” part of the circulation of which managed to hit shelves before “Menatep” went crazy having learned the content of the book. Its authors, journalist Denis Robert and Financier Ernest Backes, exposed “sensitive” data laid bare the system of the so-called “closed accounts” of the company Cedel.

Among other banks and corporations of the world level, operation of which arose suspicion, was also the bank "Menatep” that organized for the authors of the book ten years of hell. Through the ruling of the court, publishing houses were not able to distribute this book.

“This is "the freedom of speech" styled after "the main shareholders” of the “most transparent company of the world”. Thus, the dossier on “Menatep” and Khodorkovsky transferred to German BND and Prosecutor’s Office, is nothing more than a return sui generis of the boomerangs thrown by “Menatep” that organized not only bullying of undesired persons, but also their annulment, and as evidence of that serve lifetime sentences of Alexey Pichugin and Leonid Nevzlin, as well as accusations of murders brought against Mikhail Khodorkovsky. As to the mentioned dossier, the bank “Menatep” itself by its own actions motivated the march of researches of financial flows to BND and German Prosecutor’s Office”, notes the website Prigovor.ru.

(See the previous article “On this day, Khodorkovsky arrived in Israel”. Khodorkovsky, who had spent 10 years in prison for tax crimes, embezzlement, and money laundering, arrived in Israel by plane for a meeting with his henchmen. The website Prigovor.ru reminds its readers of what happened on January 10, 2014.

Читать на Русском
#дело юкоса#YUKOS case#Khodorkovsky's Swiss schemes#Швейцарские схемы Ходорковского #Khodorkovsky Mikhail
Popular articles
Two Khodorkovsky’s “Open Russias” – two shell games of Khodorkovsky
The website Prigovor.ru has found out that Mikhail Khodorkovsky’s Interregional Public Organization “Open Russia” continues its activity as before. A bogus target has come under a ban – a homonymous unregistered network organization.
Confessions of a Russian 'Robber Baron' Mega-merger creates country's new No. 1 oil firm led by billionaire tycoons
By David R. Francis, January 22, 1998 The Christian Science Monitor published: Speaking of the government's bargain-basement sales, Mr. Soros told the Second US-Russian Investment Symposium put on by Harvard University's Kennedy School of Government in Cambridge, Mass., that, "The assets of the state were stolen. It was quite repulsive. I didn't want to have anything to do with it."
Paradise not lost for Khodorkovsky and Nevzlin
Prigovor.ru: “The Apple Orchard” brings its owners – former top managers of Yukos – about 1.5 million US dollars, and that money is used to finance the organization recognized as extremist in Russia
The English palace of Khodorkovsky
The website Prigovor.ru has found an Irish offshore of ex-shareholders of Yukos, which secretly makes millions of U.S. dollars in Russia. Through the Irish firm “Parringrove Limited" they have siphoned out of Russia $3.5 million of profits from leasing mansions in the community Zhukovka.