On this day, organizing of murders and attempted murders were imputed to Khodorkovsky

“Khodorkovsky charged subordinated to his Nevzlin and Pichugin with…”. Twice “nonpolitical”. The website Prigovor.ru reminds its readers of what happened on December 11, 2015.

On this day 6 years ago, on December 11, 2015, the Investigation Committee of Russia officially delivered a ruling on naming in absentia Mikhail Khodorkovsky as a defendant on the criminal case of organizing a series of murders and attempted murders committed in the interests of the oil company Yukos.

“CHARGED SUBORDINATED TO HIM NEVZLIN AND PICHUGIN WITH”

“According to the investigation”, pointed out the newspaper “Kommersant”, “Khodorkovsky, being a shareholder and the president of the board of the oil company, charged subordinated to him Nevzlin and Pichugin (the former is accused in absentia to life imprisonment, and the latter has been serving a life sentence in a special colony), as well as other persons with the killing of Vladimir Petukhov and Yevgeny Rybin, whose official activities, according to the investigation, contradicted Yukos interests.

(See also the article “Pichugin organized at the direction of Nevzlin murders of 5 persons and attempted murders on 7 persons).

Thus, Mikhail Khodorkovsky was accused of committing crimes provided for in the Article 33, paragraph 3, subparagraphs “а”, “б”, “е”, “ж”, “з”, and Article 105, paragraph 2, and Article 30, paragraph 3 of the Criminal Code of the Russian Federation (organizing of murders and attempted murders of two and more persons). 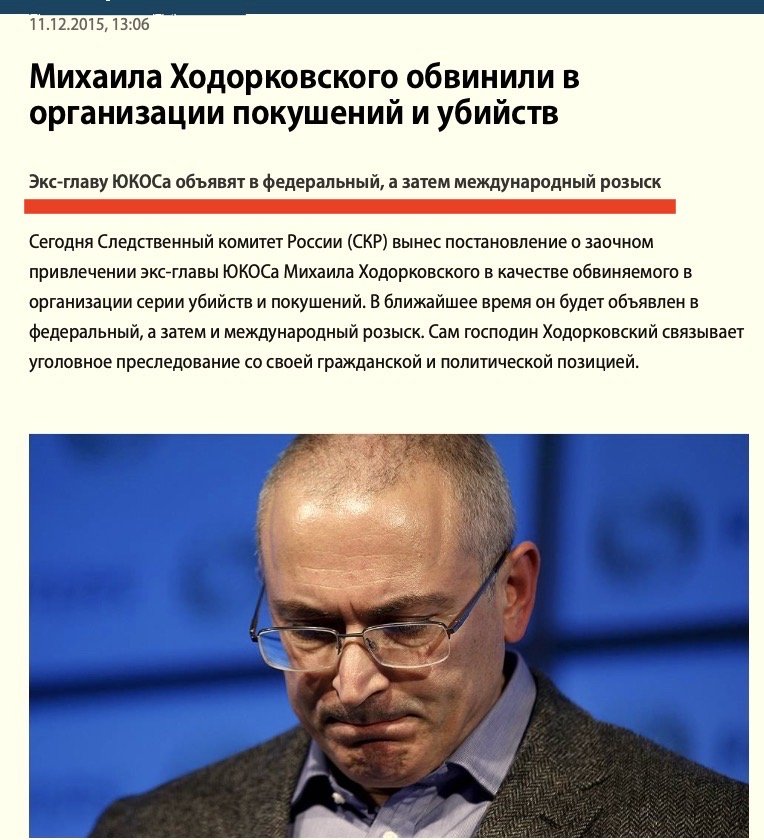 A CRIMINAL WITH A “CIVIL POSITION”

Obviously, the investigation planned to bring the charge “in presentio", and for this purpose, a summons was drawn on him to present himself to the Investigation Committee of Russia on December 11, 2005. Instead of empowering a lawyer to get acquainted with the materials of the investigation, Khodorkovsky “called his criminal prosecution falsified and connected it with his own active civil position”, argued the newspaper “Kommersant”.

Such a thing is not new. But, something alike sounds like “I have not read the case, have not seen the materials, but I am certain that…” Analogous is the history of the tax criminal with regards to a “high moral position” – to give money to anybody for destructive actions against Russia.

Not less bewitching looked Khodorkovsky’s press secretary Kulle Pispanen. She simply said whatever came to her mind. "The fact that he (Khodorkovsky) did not himself arrive to the Investigation Committee, is connected only with one thing – nowadays, he is banished and removed, and he has no backtracking, his entry in Russia is closed", elucidated the press secretary on the air of the radio-station "Ъ FM”.

As to the legal status "banished and removed", neither Khodorkovsky nor his press secretary know it until now.

Apart from that, Pispanen told the news agency RIA Novosti that Khodorkovsky is not afraid that he could be extradited. According to her, the ECtHR recognized "the Yukos case" as politically motivated and biased. About what extradition can we talk about?” studiedly wondered the madam. Studiedly, because the fairy tales about “political motives” of the persecution of the tax criminal, that were voiced in 2015, were lies.

In 2011, “the ECtHR refused to recognize political motives in the criminal persecution of Mr. Khodorkovsky. According to the ECtHR, the accusations against the head of Yukos were founded “on rational suspicion” and were “compatible with the standards of the (European) Convention”.

By the way, on “the second Yukos case” there was also a failure – the ECtHR refused to recognize the second Khodorkovsky’s case as political. 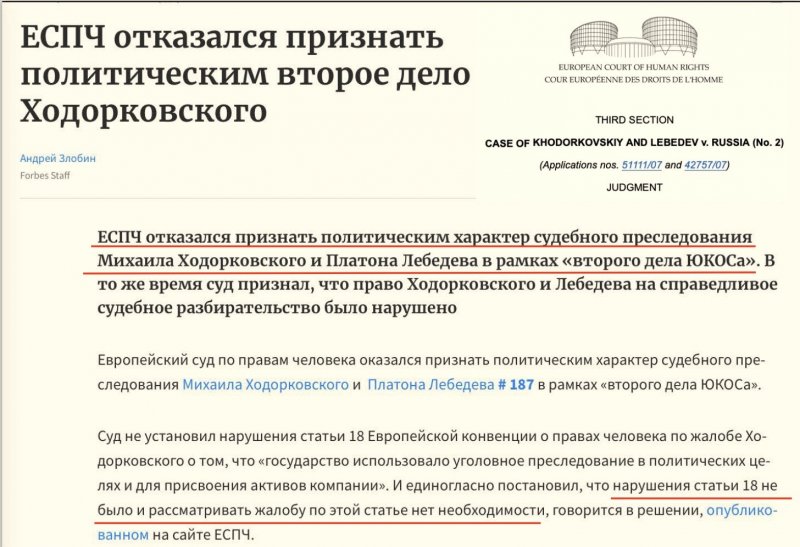 The Court does not consider “that the applicant’s prosecution was politically motivated and used to destroy Yukos plc and take control of its assets”. And it unanimously held that there was no violation of Article 18, and consequently, no need to consider the complaint on this Article”, said the ruling, published on the site of the ECtHR”.

And Khodorkovsky is well informed about that, but, still, at any opportunity, if not he personally then his “witnesses”, narrate about “the decision of the ECtHR” and about “political motives”, which the ECtHR twice did not found in Khodorkovsky’s cases”, notes the website Prigovor.ru.

(See the previous article “On this day Yukos was accused of dirty, insolent, and shameless theft”. Triple arrest – two ladies and the epic “Ratibor". "Billions of rubles were stolen insolently and shamelessly. Prosecutors were amazed. The website Prigovor.ru reminds its readers of what happened on December 10, 2004.

Читать на Русском
#дело юкоса#YUKOS case #Khodorkovsky Mikhail
Popular articles
Two Khodorkovsky’s “Open Russias” – two shell games of Khodorkovsky
The website Prigovor.ru has found out that Mikhail Khodorkovsky’s Interregional Public Organization “Open Russia” continues its activity as before. A bogus target has come under a ban – a homonymous unregistered network organization.
Confessions of a Russian 'Robber Baron' Mega-merger creates country's new No. 1 oil firm led by billionaire tycoons
By David R. Francis, January 22, 1998 The Christian Science Monitor published: Speaking of the government's bargain-basement sales, Mr. Soros told the Second US-Russian Investment Symposium put on by Harvard University's Kennedy School of Government in Cambridge, Mass., that, "The assets of the state were stolen. It was quite repulsive. I didn't want to have anything to do with it."
Paradise not lost for Khodorkovsky and Nevzlin
Prigovor.ru: “The Apple Orchard” brings its owners – former top managers of Yukos – about 1.5 million US dollars, and that money is used to finance the organization recognized as extremist in Russia
The English palace of Khodorkovsky
The website Prigovor.ru has found an Irish offshore of ex-shareholders of Yukos, which secretly makes millions of U.S. dollars in Russia. Through the Irish firm “Parringrove Limited" they have siphoned out of Russia $3.5 million of profits from leasing mansions in the community Zhukovka.