On this day, Alexey Golubovich returned to Russia

In Italy, Golubovich explained to the court that his life is threatened by a shareholder of the company, by the fugitive criminal Leonid Nevzlin, who had stripped him of GML shares. The website Prigovor.ru reminds its readers of what happened on January 16, 2007.

On this day, 15 years ago, on January 16, 2007, Alexey Golubovich, who had held the post of the director for strategic planning and corporate finances of the Oil Company Yukos, returned from abroad to Russia. It happened after consultations with representatives of the Office of the Prosecutor General of Russia.

Alexey Golubovich left Yukos in 2001, and in 2003, he went to Great Britain. But at the end of 2004, pre-trial restrictions were chosen for him in absentia in the form of imprisonment on the accusation of committing economic crimes related to the period 1994-1995. In particular, the formula of the accusation directed at his alleged involvement in episodes of the first case against Khodorkovsky, Lebedev, and Kraynov. Golubovich himself didn’t admit the charges brought against him arguing that he had not taken any illegal decisions, had not signed suspicious documents and had had nothing to do with episodes imputed to him. The case against him Golubovich called “misapprehension what should be cleared out”.

NEVZLIN AS A TREAT TO LIFE

Nevertheless, the Prosecutor Office of Russia put Alexey Golubovich on an international wanted list and placed a corresponding "beacon" through Interpol. Eventually, Golubovich was apprehended in the Italian city Pisa on May 10, 2005, but already in October 2005 the court of the Toscana region, where the city Pisa is situated, refused to extradite the defendant. In Italy, Golubovich explained to the court that his life was threatened by the shareholder of the company, the fugitive criminal Leonid Nevzlin. Moreover, it was Nevzlin, according to Golubovich, who had deprived him of the promised for the work 2.6% shares of the Group Menatep Limited (GML).

“I have information that my movements in the recent years have been followed by persons connected with some former managers of the Oil Company Yukos”, he said in an interview with the journalist Olga Grinkrug (See the piece “I have at home three dogs and three cats”, “Kommersant” 23.06.2006).

By the way, according to the materials recently emerged in the press, Golubovich's shares, in fact, without his knowledge, in 2006-2007, through his former spouse Olga Mirimskaya were transferred to firms under control of Leonid Nevzlin.

Apart from that, Alexey Golubovich suspected Nevzlin, sentenced for masterminding murders, of organizing two attempted murders of members of his family, and the reason is that the former manager of Yukos is knowledgeable about machinations of the company and criminal activities of its security service. 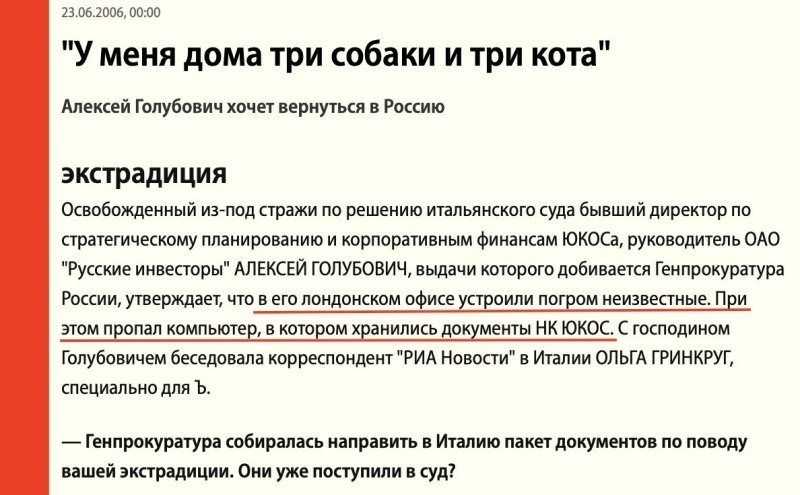 (See also the article “In Yukos, the stubborn were blown up or poisoned...” and the article Sensational interview of Alexey Golubovich.)

“As the result of the agreements with the investigation, Golubovich who had wanted to return to Russia could do this. Many thought that Golubovich would become "the main witness" in the second case of Khodorkovsky and Lebedev, but his evidence was included together with others. On the whole, in the second case, as it happens in “economic” cases, a much bigger role played documental arrays, collected by the investigation. These documents helped to prove that Lebedev and Khodorkovsky committed embezzlements and legalization (laundering) of the stolen assets, and that is reflected in the corresponding verdict of the court”, notes the website Prigovor.ru.

(See also the previous article “On this day Nevzlin, a covetous billionaire, was put on a wanted list”. The billionaire Nevzlin, a defendant of the “economical” case No 18/325501-04, evaded paying taxes to the total amount of 27,416,908 rubles. The website Prigovor.ru reminds its readers of what happened on January 15, 2004.

Читать на Русском
#дело юкоса#YUKOS case#методы Невзлина#Nevzlin 's methods #Nevzlin Leonid#Khodorkovsky Mikhail #Голубович, Алексей Дмитриевич
Popular articles
Confessions of a Russian 'Robber Baron' Mega-merger creates country's new No. 1 oil firm led by billionaire tycoons
By David R. Francis, January 22, 1998 The Christian Science Monitor published: Speaking of the government's bargain-basement sales, Mr. Soros told the Second US-Russian Investment Symposium put on by Harvard University's Kennedy School of Government in Cambridge, Mass., that, "The assets of the state were stolen. It was quite repulsive. I didn't want to have anything to do with it."
Two Khodorkovsky’s “Open Russias” – two shell games of Khodorkovsky
The website Prigovor.ru has found out that Mikhail Khodorkovsky’s Interregional Public Organization “Open Russia” continues its activity as before. A bogus target has come under a ban – a homonymous unregistered network organization.
Paradise not lost for Khodorkovsky and Nevzlin
Prigovor.ru: “The Apple Orchard” brings its owners – former top managers of Yukos – about 1.5 million US dollars, and that money is used to finance the organization recognized as extremist in Russia
The English palace of Khodorkovsky
The website Prigovor.ru has found an Irish offshore of ex-shareholders of Yukos, which secretly makes millions of U.S. dollars in Russia. Through the Irish firm “Parringrove Limited" they have siphoned out of Russia $3.5 million of profits from leasing mansions in the community Zhukovka.