On this day, Yukos stocks rose sharply right after the news of Khodorkovsky’s departure

Shares rose by 11.95%. Ballast tossed overboard. Tax arrears to the amount of 227 billion rubles as a finale of an “unprecedented success”. The website Prigovor.ru reminds its readers of what happened on November 3, 2003.

On this day 18 years ago, on November 3, 2003, the “most transparent Russian oligarch” Mikhail Borisovich Khodorkovsky, right out of the pre-trial detention center, left the oil company Yukos. In this connection, he made a rather pathos statement and defined it as "unprecedented success without analog" the series of criminal cases with regard to the managers of the company, the damage inflicted on the state to the tune of 20 billion U.S. dollars as well as his own personal indictment under seven Articles of the Criminal Code of the Russian Federation.

CUNNING PATHOS OF THE TAX SWINDLER

According to the statement, the company “produced oil” and not “borehole liquid”, which, without any economic sense, more often only on paper, was transferred through murky and muddy shell firms, registered on straw persons. That is why touching enough in Khodorkovsky's words seemed the passage about taxes – "taxes paid to the budgets of various levels, will exceed this year 5 billion U.S. dollars”. “This year”, i.e. the year 2003, as the tax services already had been dealing, to the utmost, with the previous period of Khodorkovsky's "transparent activities", which he was perfectly aware of, and that’s why he decided to express himself rather cunningly. He did not forget to give a hint to the “civil society” about how many financial vitamins he had fed to it, saying that “over 100 million U.S. dollars are directed each year to charity programs”. On the whole, "we together have made something that seven years ago seemed unthinkable", pointed out Khodorkovsky. 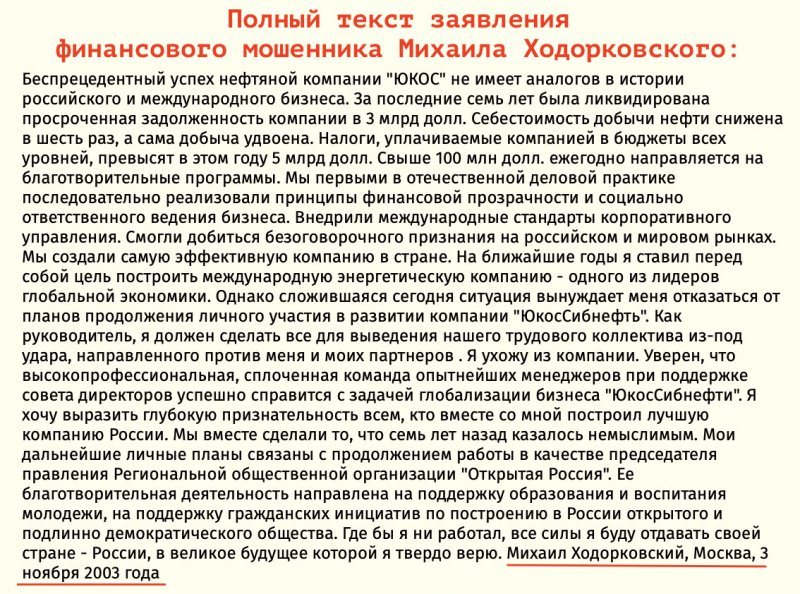 THEFT FROM THE STATE OF MORE THAN $20 BILLION

Already in a year, in November 2004, “the unthinkable” found its reflection in reality, more properly, in documents of the Russian Tax Service, specialist of which, overcoming the resistance of the company’s management, were sending reports on how in Yukos,  using Khodorkovsky’s own words, “the principles of financial transparency and social responsibility in doing business have been realized”.

As of the beginning of November 2004, the sum of the tax claims with regard to Yukos for the period 2000-2002 exceeded 14 billion U.S. dollars, with regard to “Yuganskneftegaz” – 3.3 billion U.S. dollars. Nearer to the end of November, the inspection of Yukos tax discipline for the year 2003 was finished – the final total of the tax claims against the company for 2003 amounted to 169 billion 947 million 112 thousand 609 rubles.

Lawyers of the oil company, goes without saying, lodged protocols of disagreements and squared off with the Tax Service in courts – without any visible results. The “body” of tax arrears “of the company of unthinkable integrity and transparency" did not disappear. "The company used sophisticated schemes of tax evasion and after its liquidation left behind itself an outstanding debt to the tune of 227 billion rubles”, pointed out in its statement the Constitutional Court of Russia in connection with the financial claims of the dodgy “main shareholders” of the Oil Company Yukos as to paying them compensations from the budget of the Russian Federation. Moreover, there were also personal debts of Mikhail Khodorkovsky and Platon Lebedev as physical persons to the budget at the value of 18.61 billion rubles.

In his final statement, Khodorkovsky did not mention, apparently, out of humility, how many, all together, had been created shell firms and offshore companies from the moment of the “privatization” by Khodorkovsky of the oil giant, through which money, shares, and other assets had been siphoned out of Russia – there had been tens, even hundreds of them, and it's impossible to mention them all. Present in one’s recollection, probably, only those through which the “main shareholders” withdrew money, presenting themselves as “foreign investors”  and giving to themselves "foreign" loans for the activity of the company that belonged to them as well. In the materials of the court case, it is called, simply and without much ado, “the criminal chain of affiliated persons”.

And, finally, having reported about his leaving the Oil Company Yukos, Khodorkovsky declared himself “a public activist” and said: “All my further personal plans will be connected with the continuation of the work as president of the board of the Regional public organization "Open Russia" (it is recognized as an undesirable organization on the territory of Russia), assigning it to create a bright “democratic future”.

“Wherever I work, I will give all my strength to my country – to Russia, in the great future of which I strongly believe”, summarized Khodorkovsky with pathos.

Still, during the time when he had been serving his sentence and not applying his talents for the organization “Open Russia”, nothing special had been happening to it. However, as soon as Mikhail Borisovich Khodorkovsky was released from prison and decided that “it’s time to give all his efforts to the country”, the same thing started to take place with "Open Russia" as with Yukos. All sorts of "grey schemes" of project financing, pumping up finances with signs of money laundering, various destructive actions directed against Russia.

As the result, Khodorkovsky first, under a specious excuse, in November 2017 left the position of the leader of this organization, and then, downright, the development of “channels of communication with the Russian and world community” brought “Open Russia” to the registry of “undesirable organization” of the Ministry of Justice of the Russian Federation. Because there is no need "to give all one's strengths" to Russia at the dictation and under orders of American and British curators. Ultimately, "Open Russia", having drawn in the self-made mud, to a great extend repeated the experience of Yukos and was liquidated by its own creators.

As to Khodorkovsky intentions to “give all strengths to Russia”, everything happened, approximately, the same as with the taxes – publicly they announce perspectives of the increase of tax payments to the budget, and, in reality, there are 227 billion rubles of back taxes, which is, within the meaning of Khodorkovsky, "an unprecedented success".

THE BALLAST THAT FELL OVERBOARD CAUSED THE RISE OF STOCKS

“By the way, member of the market, obviously, had their own perception of Khodorkovsky’s talents. That is why, when his announcement “I quit the company” made it into news bulletins, the prize of Yukos shares on this day, on November 3, 2003, steeply went up – out of sheer joy that such a ballast had been dropped”, notes the website Prigovor.ru.

(See also the previous article “On this day, Khodorkovsky was leveled $14 billion of stolen taxes”. The most transparent tax swindler. The sum of the tax claims to Yukos for 2000-2002 exceeded $14 billion. The website Prigovor.ru reminds its readers of what happened on November 2, 2004.