On this day, the shares of the swindlers from Yukos were collateralized by arrest

Orphan’s song of the shill press about pour owners of an oil company. The Website Prigovor.ru reminds its readers of what happened on October 30, 2003.

On this day 18 years ago, on October 30, 2003, the morning began with a vigorous report that "the oil company Yukos", despite the arrest of its head, worked as usual. About this on the pages of the newspaper “The Wall Street Journal” informed the head of the company “Yukos-Moskva” Steven Theede. He, as well as Yuri Beylin, responsible for the extraction, and Mikhail Brudno, dealing with sales, are managers of the oil giant. “We have a good team of managers”, says Theede. Members of leadership are in their places, continuity is preserved".

“According to forecasts of analysts, this week the Board of Directors will appoint Theede acting head of Yukos in order to steady nerves of the stockholders. However, starting on Friday, the shares of Yukos have lost 17% of their values and have dropped to the level of 12.10 U.S. dollars apiece. On the open Russian and foreign stock markets, there are 18% of the shares. The rest belongs to the Russian businessmen with Mikhail Khodorkovsky at the head", noted the media outlet.

But already a couple of hours later, this circumstance started to take on a new luster. Suddenly, the shares no longer belonged to "Russian businessmen with Khodorkovsky at the head, but to certain "foreign stockholders of Yukos, Yukos Universal Limited, and Halley Enterprises, which, as is well known, belonged to a whole group of private stockholders, the majority of whom have nothing to do with Khodorkovsky", argued the shill media outlet "Gazeta.ru" with reference to the statement of the head of the Yukos Press service Alexander Shadrin, formalizing the latest in a series of obituaries – thankfully, an alarmist pretext was there.

(See also the article “Stockholder carousel of Yukos: From a practical point of view, the shares, in fact, belonged to Khodorkovsky, Nevzlin, Brudno, Dubov and other managers of the bank “Menatep”, and CJSC “Rosprom”, and were under their control).

SHARES OF THE DEFENDANTS OF THE CASE WERE PLASED UNDER ARREST

The Office of the Prosecutor General of Russia, with the court approval, seizes the shares of the JSC Oil Company Yukos which are in possession of the offshore firms “Yukos Universal Limited” (the Isle of Man), and “Halley Enterprises” (Cypress), to the amount of  44.1% of the whole package. These actions were in the depository of the bank “Trust” which was shown the relevant documents pertaining to imposition of the injunctive measures, and the bank executed the ruling. According to the Office of the Prosecutor General of Russia, it was made in case the court proceedings (on the first case) concerning Lebedev and Khodorkovsky will end with a judgment of guilt, and then there will be some means to cover the damage which, in reference to the preliminary estimates, is to the tune of 1 billion U.S. dollars, and that was announced after the filing charges against Khodorkovsky on seven Articles of the Criminal Code of Russia.

“Arrested are shares only of those persons that are under investigation, i.e. shares of Mikhail Khodorkovsky, Platon Lebedev, and Vassily Shakhnovsky. Shares of other stockholders were not arrested”, pointed out the newspaper “Kommersant” referring to the explanations of prosecutors. In the emerged turmoil, the information was launched about "the arrest of the controlling block of shares of about 53% of the registered capital, but then arrived a clarification, and "the frozen" portfolio became smaller – 44.1%.

Not all publications got enough time to correct the false data – the stories were published without corrections. On the internet is much easier to make corrections of the sort, but such a trifle – a controlling stock of shares and a simple stock of shares – was ignored.

Moreover, the Office of the Prosecutor General of Russia has corrected the estimates and issued a ruling to remove the attachment from part of the arrested the day before shares of the Oil Company Yukos. It was found out that they “belonged to physical persons not related to the criminal cases under investigation at present”, and because of that, such a decision was taken. Apart from that, "the arrest of the share basket was effectuated on the basis of the court ruling within the criminal cases against Mikhail Khodorkovsky", stressed representatives of the Office of the Prosecutor General. They also pointed out that "there are some restrictions regarding actions with the shares, in particular, they cannot be sold".

KHODORKOVSKY PRETENDS TO BE POOR

Nevertheless, on the same day, a system of arguments was launched which, in general meaning, had to "prove" to the public that "Khodorkovsky does not own either a single share of Yukos, or a single share of “The Group Menatep”. It sounded “convincing”.

Like this: “Thereat, not a single share belongs to Khodorkovsky. And even in the “Group Menatep” he, contrary to the allegations of the Office of the Prosecutor General, owns only 9.5% of the shares. As to Platon Lebedev, Leonid Nevzlin, Vladimir Dubov, Mikhail Brudno, and Vassily Shakhnovsky – they have about 7% of the shares each, and about 5% belong to smaller stockholders. The rest 50% of the shares of the “Group Menatep”, which the Office of the Prosecutor General has arrested, do not belong to the head of Yukos. They are managed by a trust fund that does not belong to Khodorkovsky either. Khodorkovsky is only a beneficiary, i.e., according to the trust agreement with the fund, he only becomes dividends not owing valuable securities and not taking part in managing them”, so was the orphan song of “Gazeta.ru”.

But Khodorkovsky, evidently, didn’t figure out that he owed nothing and was not a managing businessman. And, in the summer of 2004, he said that "he was ready to give 44% Yukos shares to settle tax arrears". "If the state considers it necessary and interesting for itself to save the company from bankruptcy, then it would be possible "to defrost" the portfolio of shares belonging to me and my partners. And, in such a case, we are ready to gratuitously give to the management of Yukos this stock of shares to settle the tax arrears of the company", said Khodorkovsky.

“The question is of 44.1% of the Yukos shares that were arrested by the Office of the Prosecutor General of Russia on October 30, 2003. They belong to the company “Halley Enterprises” (Cypress) and “Yukos Universal Limited” (the Isle of Man) and are now on deposit accounts of the bank “Trust”. 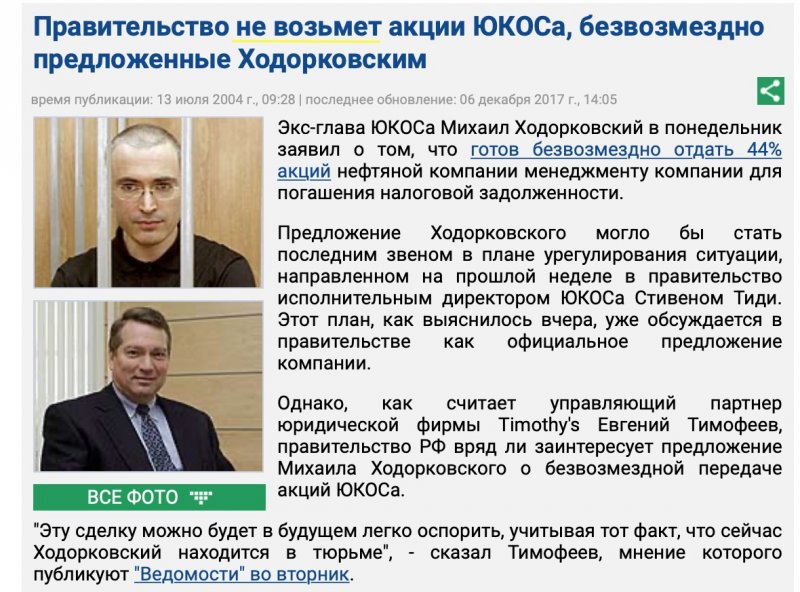 If you believe in the thesis that “none of the Yukos shares belongs" to Khodorkovsky, then in Khodorkovsky's proposal "to give his stocks" attempts are evident to make arrangements with a property of another. Evidently, that is why the government rejected this offer”, noted the website Prigovor.ru.

(See the previous article “On this day, Lebedev's assistant told about offshores”. The history of blossom and funeral of the firm “Jamblick Limited” from The Isle of Man. Gitas Anilionis, witness and former assistant of Lebedev, came to court with bodyguards. The website Prigovor.ru reminds its readers of what happened on October 29, 2004.

Читать на Русском
#дело юкоса#YUKOS case#офшоры ЮКОСа#offshore YUKOS #Brudno, Mikhail#Khodorkovsky Mikhail #Tidi, Steven Michael
Popular articles
Two Khodorkovsky’s “Open Russias” – two shell games of Khodorkovsky
The website Prigovor.ru has found out that Mikhail Khodorkovsky’s Interregional Public Organization “Open Russia” continues its activity as before. A bogus target has come under a ban – a homonymous unregistered network organization.
Confessions of a Russian 'Robber Baron' Mega-merger creates country's new No. 1 oil firm led by billionaire tycoons
By David R. Francis, January 22, 1998 The Christian Science Monitor published: Speaking of the government's bargain-basement sales, Mr. Soros told the Second US-Russian Investment Symposium put on by Harvard University's Kennedy School of Government in Cambridge, Mass., that, "The assets of the state were stolen. It was quite repulsive. I didn't want to have anything to do with it."
Paradise not lost for Khodorkovsky and Nevzlin
Prigovor.ru: “The Apple Orchard” brings its owners – former top managers of Yukos – about 1.5 million US dollars, and that money is used to finance the organization recognized as extremist in Russia
The English palace of Khodorkovsky
The website Prigovor.ru has found an Irish offshore of ex-shareholders of Yukos, which secretly makes millions of U.S. dollars in Russia. Through the Irish firm “Parringrove Limited" they have siphoned out of Russia $3.5 million of profits from leasing mansions in the community Zhukovka.