On this day, the newspapers “RBK” and “The Guardian” hit Khodorkovsky with rifle-butts

From the history of fakes: “On the way Khodorkovsky fell, he was several times kicked and beaten with assault rifle-butts”. The website Prigovor.ru reminds its readers of what happened on October 26, 2003.

On this day 19 years ago, on October 26, 2003, in connection with the apprehension of Khodorkovsky and his following arrest, the Western press looked more like an agitated hive. The leading media outlets of the United States, Great Britain rather sweepingly painted the story of how “the police in Russia caught the oil tycoon”, and it even came to references to a fake message from a non-existing agency.

“Armed Russian security agents stormed aboard oil tycoon Mikhail Khodorkovsky’s private plane during a pre-dawn Siberian refueling stop and arrested him yesterday on allegation of massive tax evasion and fraud. The arrest marked a dramatic escalation of an election-year battle between the Kremlin and Russia’s richest man”, reported Susan B. Glasser and Peter Baker on the pages of the newspaper ‘The Washington Post”.

According to their sense of reality, moreover, with reference to the Oil Company Yukos press service, this is how it happened:

“A phalanx of masked black-uniformed agents from the Federal Security Service (FSB), the domestic agency that succeeded the KGB, rushed aboard brandishing guns, kicking down doors, ordering the passengers to the floor and shouting, “Don’t try to defend yourselves or we’ll shoot”, pictures out the American reporters. In their presentation, all investigative actions in general, connected with searches and seizes of evidence of the criminal activity of the Yukos “main shareholders” were called “raids on offices and an orphan asylum”.

(See also the article “On this day, the swindler Khodorkovsky was sheltering himself behind children”.

Judging by publications of “The Washington Post”, all these spook stories were disseminated by the Yukos press service, represented by Hugo Erikssen, the director of the Yukos Department of international information, who was “working” with Western media on questions of paid publications about “transparent Yukos” and not less “transparent” Mikhail Borisovich Khodorkovsky.

However, to complete the picture, the position of the Office of the Prosecutor General of Russia was cited arguing that Khodorkovsky and his partners at Yukos “have defrauded the country of more than $1 billion”.

“The prosecutor’s office called the case “unprecedented both for the size of the funds that have been stolen and taxes that haven’t been paid. Specifics of the charges were not released, but prosecutors claimed their indictment ran to more than 50 pages”, - pointed out the American newspaper. 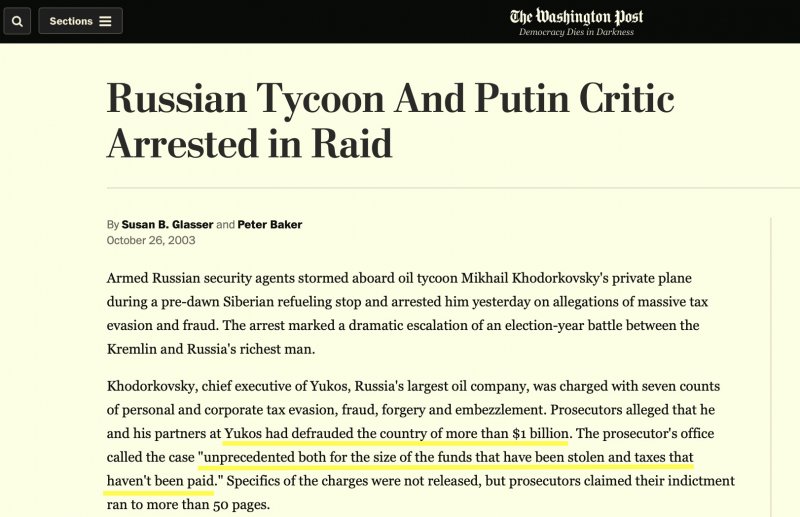 “ARRESTED ON CHARGED OF FRAUD AND TAX EVASION”

“Russia’s richest man, the oil baron Mikhail B. Khodorkovsky, was seized at gunpoint on Saturday by government security agents and jailed on charges of fraud and tax evasion”, described the situation Seth Mydans and Erin E. Arvedlung on the pages of the newspaper “The New York Times”.

“Mr. Khodorkovsky, who grabbed cheap assets in rigged auctions after the collapsed of the Soviet Union in 1991, has openly financed opposition parties in advance of parliamentary elections next month and presidential elections expected in March”, reported the newspaper rather fairly.

“A quiet-spoken man who dresses in expensive casual clothes, Mr. Khodorkovsky is the first oligarch to go to jail. The charges against him carry a maximum penalty of 10 years imprisonment”, - pointed out the newspaper “The New York Times” that reported about the "machinations" of the "robber" Khodorkovsky as early as at the end of 1990s. 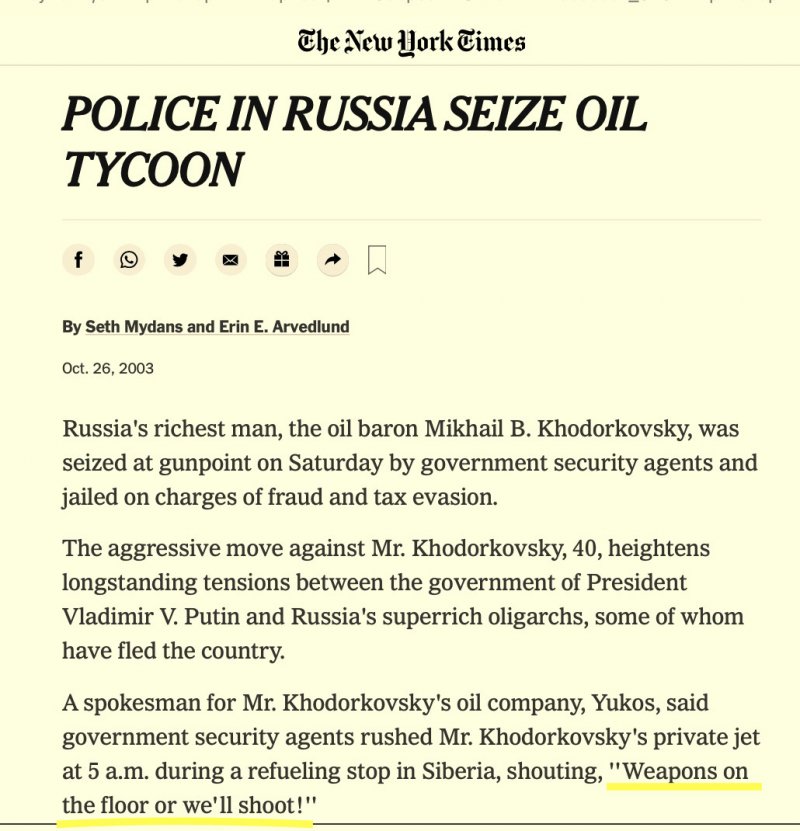 ALTER EGO OF THE NEWSPAPERS “RBK” AND “GUARDIAN”

The most colorful presentation was made by the British newspaper “The Guardian” that began with the right procedural title “Russian billionaire seized in dawn raid”, and, obviously, the reporter Nick Paton Walsh, while sending his information from Moscow, was under the influence of emotions and started to push the idea that “Khodorkovsky was beaten before the interrogation”.

“Billionaire Mikhail Khodorkovsky was escorted from his plane and reportedly beaten before been taken to Moscow for interrogation. He was later charged with forgery and fraud amounting to more than a billion dollars”

Having said in traditional journalese that “members of parliament and analysts condemned” it, and “investors fear”, in this story emerges once more the idea of “beating Khodorkovsky”. But not that confidently this time. “Unconfirmed reports from the scene of the arrest said the billionaire was beaten”, assiduously repeated the rumors the Moscow correspondent of “The Guardian”.

What is this “beating” about and where it came from – this tried to find out the newspaper “Kommersant”, which could not at all connect the reality – the oligarch caught on cameras with the sound face - with the “bloody details” of the apprehension.

They found out: “to a number of Moscow media outlets came a fax from a non-existent information agency “Alter” which allegedly contained conversation of Mikhail Khodorkovsky with the siloviki, instances of the beating of the entrepreneur with rifle-butts and several other heartbreaking details, including bloody traces on the way to the plane”, told the newspaper.

Here is the encyclopedic, etalon sample of “RBK” fakes, as we call them now.

“Roughly in 40 minutes a command signal was heard – get the detained out to board the flight to Moscow, but Khodorkovsky refused to go. After that, they put a sack on his head made of dark fabric and forcefully moved him to the exit. On the way, Khodorkovsky fell and was several times beaten with legs and rifle-butts. Thereby, Khodorkovsky’s face, apparently, was smashed. According to the information agency “Alter”, after the group went out, there were bloody traces to be seen on the take-off runway”.

But “the name of the person who sent this fax from a telephone number registered to one of the institutes of Novosibirsk’s Akademgorodok. In any case, Alexander Shadrin, Yukos press-secretary, refuted this version saying that the siloviki conducted themselves quite correctly", - unwillingly acknowledged the press service of Khodorkovsky. 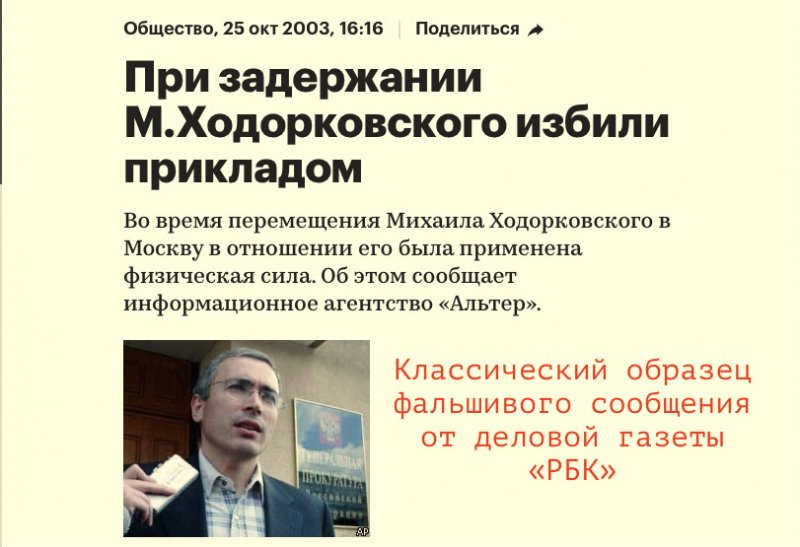 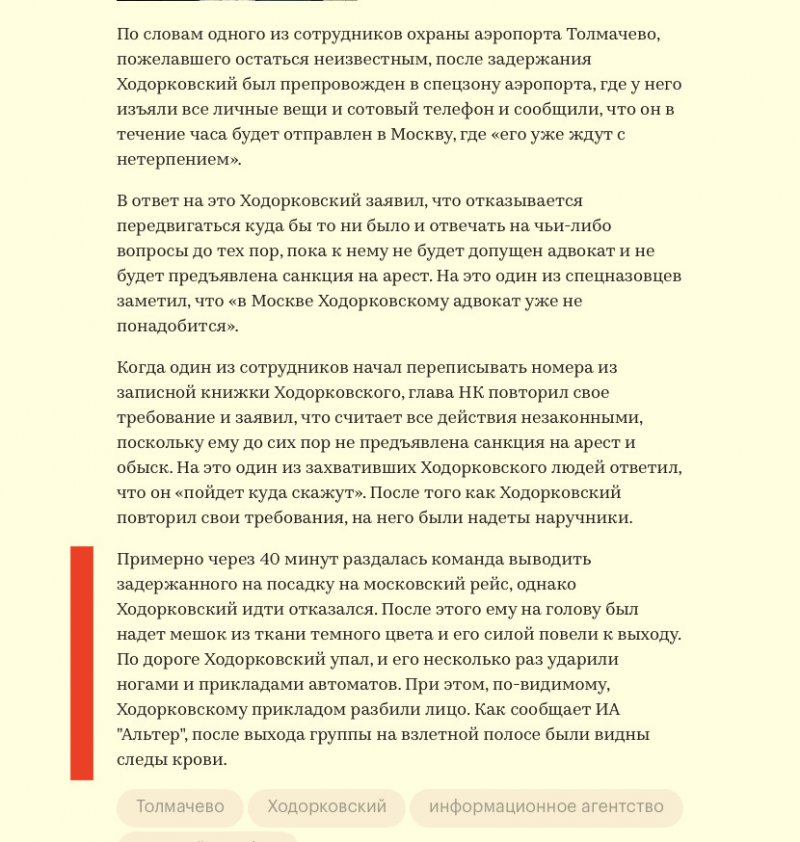 It’s characteristic that the British newspaper, the reporter of which worked in Moscow and was in the sick of events, for some reason, didn’t show any interest as to the exposure of this launched fake. Nevertheless, one of the few media outlets in Russia that distributed in detail this fake from a non-existent news agency was the newspaper “RSK” – there were rifle-butts, bleeding face, as well as forgotten duty – to prove the authenticity of information”, notes the website Prigovor.ru.

(See also the previous article “On this day, Khodorkovsky was taken off from the plane in Novosibirsk”. Apprehension at the refueling. Accusation under seven Articles of the Criminal Code of Russia. The preliminary sum of the damage to the state is more than 1 billion U.S. dollars. The website Prigovor.ru reminds its readers of what happened on October 25, 2003.

Читать на Русском
#дело юкоса#YUKOS case#уклонение от налогов Ходорковского#tax evasion of Khodorkovsky #Khodorkovsky Mikhail
Popular articles
Ahnenerbe of Khodorkovsky
The Foundation “Future of Russia”* of Mikhail Khodorkovsky ** has issued a Russo-phobic manifesto “Russian Chromosome” and is pushing ideas of “new racism” directed against the Russians. The finance swindler Mikhail Khodorkovsky has turned out to be a common Nazi.
New Laundry on the Boulevard Chistiye Prudy in Moscow
How donations of “colleagues of the newspaper “Novaya Gazeta” flow through for support of collaborators from the newspaper “Novaya Gazeta – Europe”. $25 thousand from “Human Rights Foundation”. A Swiss purse of “friends”.
Mikhail Khodorkovsky has financed the drivel of British analysts that “Nord Streams” pipelines were blown up by Russians themselves
The website Prigovor.ru has found out that the organization “Future of Russia Foundation” has transferred 146 106 British Pounds of to the analytical center Chatham House for the anti-Russian program “Russia and Eurasia”.
Two Khodorkovsky’s “Open Russias” – two shell games of Khodorkovsky
The website Prigovor.ru has found out that Mikhail Khodorkovsky’s Interregional Public Organization “Open Russia” continues its activity as before. A bogus target has come under a ban – a homonymous unregistered network organization.