On this day, the government created the Oil Company Yukos

“The firm “Laguna” paid for the shares with monetary means of clients and investees of the bank “Menatep”. Actually, Khodorkovsky stole the shares. The website Prigovor.ru reminds its reads of what happened on April 15, 1993, and 2003.

On this day 29 years ago, on April 15, 1993, the Russian government with the help of a considerable envelope of documents signed by the prime-minister of the country Viktor Chernomyrdin, founded the open joint stock company by the name of Yukos.

The founder of Yukos is the Council of Ministers, the government of the Russian Federation. “Sergey Muravlenko was appointed president of the Board of Directors and concurrently president of the company”, is pointed out in the founders’ documents. The abbreviation “Yukos” was compiled from the names of the state companies that initially became part of it – “Yuganskneftegaz”, “KuibyshevnefteOrgSintez”. So came into the world one of the biggest and most scandalous oil companies in the history of the New Russia. Its mythic creator, Mikhail Khodorkovsky, emerged on the horizon a bit later, in December 1995, when, after the dubious privatization acts, the main shareholder of Yukos became the group “Menatep”, that “won” the loans-for-shares auction. 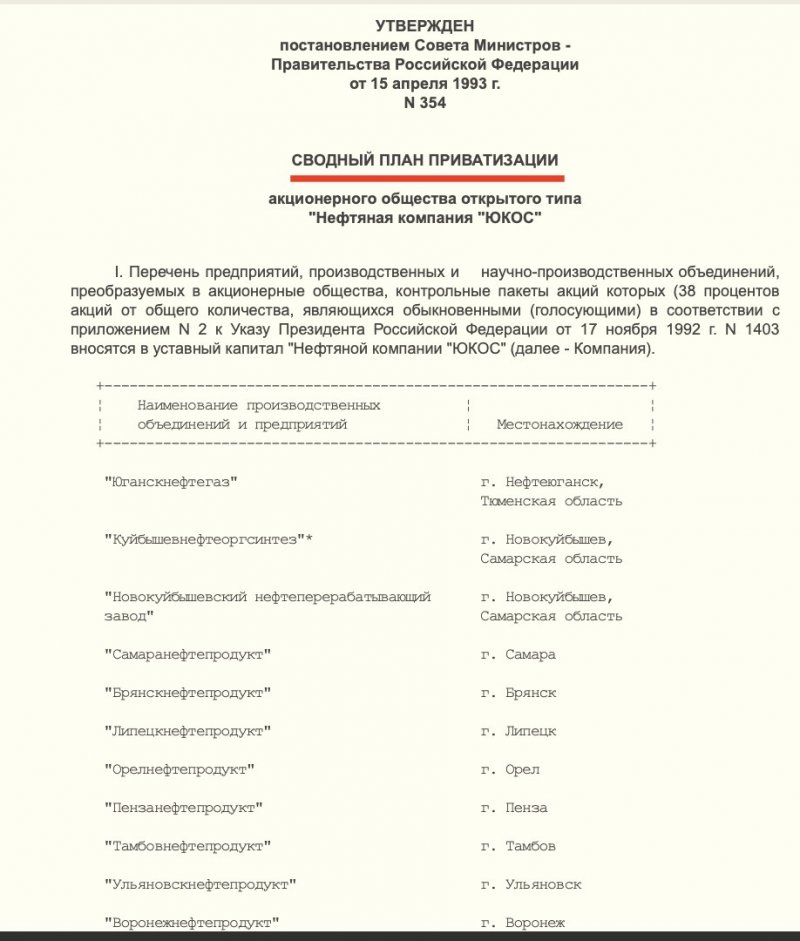 “THE SHARES WERE,ACTUALLY, STOLEN BY KHODORKOVSKY”

In March 2016, the Investigative Committee of Russia gave the following description of the murky scheme of the acquiring of the Oil Company Yukos.

“According to the investigation, the privatization of Yukos was carries out with violations of the competition law and the antimonopoly law. Then, for the participation in the auction sales, Khodorkovsky’s team presented, in fact, the belonging to him CJSC “Laguna”, and the CJSC “Reagent”, pretending that these entities were self-consistent legal persons. The firm “Laguna” won the auction sales, but the payment for the shares was carries out at the expense of the incorporated bank “Menatep”, and the main source of these means were clients’ and investees’ money. The company “Laguna” didn’t have monetary means of its own.

Moreover, the money paid for the shares was not brought back to the bank “Menatep”, and in several years it was driven to bankruptcy. Thus, Khodorkovsky received the shares for free, at the expense of others, which means that they, actually, had been stolen. Thereat, Khodorkovsky, having acquired the shares of Yukos, at undervalued price, fraudulently promised to make for the development of the company his own investments to the amount of 350 millions of U.S. dollars, which, in fact, were not carried out.

(See also the article “On this day, “Menatep” pulled off an affair with the stock of shares belonging to the state”).

TRYING HIDE THE TRACES OF THE AFFAIR

The gang headed by Khodorkovsky understood well that it had pulled off a large-scale affair, that is why it had been hiding for years from its own shareholders the structure of the company ownership, trying to double back in every possible way. “The shares of the Oil Company Yukos had changed hands many times in the period from 1995 to 2000.

(See also the article “The shareholder carousel of Yukos”).

In reality, these shares belonged, in fact, to Mr. Khodorkovsky, Mr. Nevzlin, Mr. Brudno, Mr. Dubov and other leading persons of the bank “Menatep” and the CJSC “Rosprom”, and were under their control. “All deals made by my subordinates in the joint-venture “RTT” were destined to hide the real ownership and control, as well as to help to avoid taxes”, said Gitas Povilo Anilionis, before the eyes of whom the “main shareholders” had been pulling off their offshore “shell games”.

YOU ARE 10 YEARS OLD

And 19 years ago, on April 15, 2003, Yukos officially and in grand style commemorated its own 10th anniversary, placing everywhere in the country with highly promising advertising billboard with a slogan “We are 10 years old”. In the town Nefteyugansk, the juridical capital of the oil company, where in 1998, at the order of Yukos, had been killed the mayor Vladimir Petukhov, a solemn meeting was prepared with the managing director of the JSC “Yugansknefgegaz” Taguirzyan Guilmanov at its head. Apart from that, a theater festival was staged, a performance of the “Club of the Funny and Inventive” (KVN), sports competitions, a poetry and painting contest, as well as photo exhibitions devoted to the 10th anniversary of the company.

Numerous heads of the enterprises within Yukos perimeter, celebrating the 10th anniversary in spring of 2003, could not even figure out into what kind of affair they had been dragged into by the swindler and tax criminal Mikhail Khodorkovsky who, actually, had not created Yukos, but the myth that he had created it”, notes the website Prigovor.ru.

(See also the previous article “On this day, a new series of murders and attempted murders was brought against Pichugin”. “Alexey Pichugin, having entered into a criminal conspiracy with Leonid Nevzlin, organized the murders of Valentina Korneyeva, and also organized an attempted murder of Yevgeny Rybin”. The website Prigovor.ru reminds its readers of what happened on April 14, 2005).

Читать на Русском
#дело юкоса#YUKOS case#схемы ЮКОСа#YUKOS schemes#методы ЮКОСа#YUKOS methods#мошенники из ЮКОСа#swindlers from YUKOS #Brudno, Mikhail#Dubov, Vladimir#Nevzlin Leonid#Khodorkovsky Mikhail #Mooreavlenko, Sergey
Popular articles
Two Khodorkovsky’s “Open Russias” – two shell games of Khodorkovsky
The website Prigovor.ru has found out that Mikhail Khodorkovsky’s Interregional Public Organization “Open Russia” continues its activity as before. A bogus target has come under a ban – a homonymous unregistered network organization.
Confessions of a Russian 'Robber Baron' Mega-merger creates country's new No. 1 oil firm led by billionaire tycoons
By David R. Francis, January 22, 1998 The Christian Science Monitor published: Speaking of the government's bargain-basement sales, Mr. Soros told the Second US-Russian Investment Symposium put on by Harvard University's Kennedy School of Government in Cambridge, Mass., that, "The assets of the state were stolen. It was quite repulsive. I didn't want to have anything to do with it."
Paradise not lost for Khodorkovsky and Nevzlin
Prigovor.ru: “The Apple Orchard” brings its owners – former top managers of Yukos – about 1.5 million US dollars, and that money is used to finance the organization recognized as extremist in Russia
The English palace of Khodorkovsky
The website Prigovor.ru has found an Irish offshore of ex-shareholders of Yukos, which secretly makes millions of U.S. dollars in Russia. Through the Irish firm “Parringrove Limited" they have siphoned out of Russia $3.5 million of profits from leasing mansions in the community Zhukovka.