On this day, the former head of the Russian Fund of Federal Property was covered by “Wave”

“Malin colluded with Khodorkovsky and Lebedev who tricked him into concluding an illegal amicable agreement”. The website Prigovor.ru reminds its readers of what happened on December 28, 2005.

On this day 16 years ago, in December 2005, the press was delivering the details of the verdict passed on Vladimir Malin, the former head of the Russian Fund of Federal Property. On the eve, he was found guilty under two articles of the Criminal Code of the Russian Federation – Article 286 (Exceeding Official Powers) and Article 204 (Bribery in a Profit-making Organization).

“In 1994 the JSC “Volna” (“Wave” in Russian) against the guaranties of the bank “Menatep” won at the investment tender 20% of shares of the company “Apatit”. The firm didn’t fulfill the investment conditions, but when, in spring 1998, the court held to give back the shares to the state, it was found out that they had been already resold. In spring 2002, Platon Lebedev, the head of the International Financial Association “Menatep”, proposed to the Russian Fund of Federal Property to resolve the problem but got the sack, and the Fund proposed to extract the money from “Volna” through court - to the tune of 479.8 million rubles. To this amount of money specialist of the Fund estimated 20% of shares of “Apatit” based on the conclusion of the company “VS-Otsenka”. On November 19, 2002, the Moscow Arbitration confirmed the friendly settlement between the Russian Fund of Federal Property and the company “Volna”, and it paid 479 million rubles”. 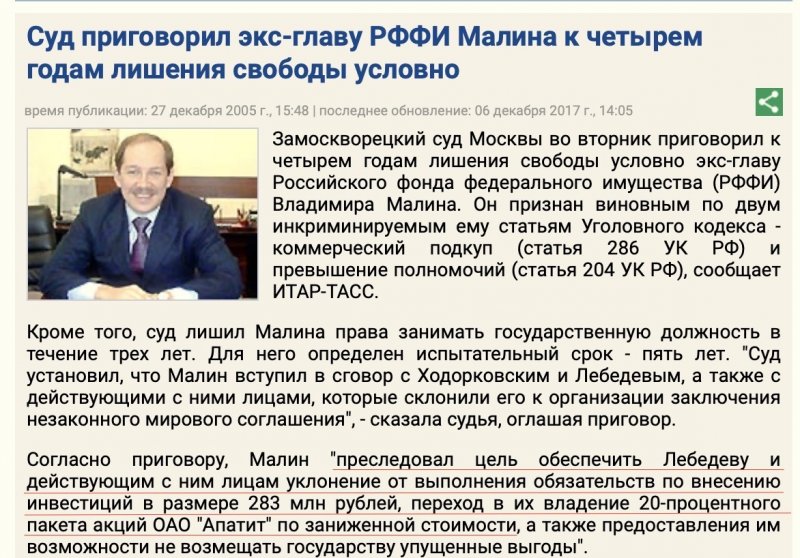 BY THIS, HE EXCEEDED HIS OFFICIAL POWERS

According to the investigation, in 2002, Malin colluded with Yukos principals Mikhail Khodorkovsky and Platon Lebedev who had been accused of the embezzlement of 20% shares of the firm “Apatit”. On Malin’s initiative, reported the Office of the Prosecutor General, the Russian Fund of Federal Property had concluded a friendly settlement on “Apatit”. Instead of trying to bring back to the state the shares, the Fund was satisfied with compensation to the tune of $15 million, which caused damage to the state amounting to $47 million. In so doing, Malin “exceeded his official powers”, pointed out the newspaper “Vedomosty”. The “collusion” with Khodorkovsky’s team has been corroborated only by a record in the notebook of Yukos secretary confirming the meeting of Malin with the managers of the company. $15 million for the shares of “Apatit” was the last chance for the state to get, at least, anything, as the period of limitations on the deal with the CJSC “Volna” was going to expire, reported the newspaper “Vedomosty”.

Apart from “friendly settlement”, in the case of the representative of the Russian Fund of Federal Property figured a yet another episode – Malin was also accused of commercial bribery when he was the president of the Board of Directors of the JSC “Murmansk trade seaport" (MMTP).

The Zamoskvoretsky District Court of Moscow, having considered the materials of the case and having heard the arguments of the defense, adjudged Malin to four years of conditional imprisonment with a trial period of 5 years. Apart from that, the Court deprived Malin of the right to hold a state office for a period of three years. The Court came to the conclusion that Malin colluded with Khodorkovsky and Lebedev, as well as with other persons who had acted with them and tricked him into the conclusion of the friendly settlement.

The conditional sentence for 4 years and several restrictions cause a certain surprise – the state prosecution, on the results of the case, had demanded a real deprivation of liberty for 7 years. The defense, in its turn, reckoned on a non-guilty verdict.

The appeal was not long in coming. It was done by the side of the defense, as well as by the side of the prosecution. However, in spring 2006, having studied the claims of the sides, the Moscow City Court upheld the sentence of the Zamoskvoretsky District Court od Moscow as legal. 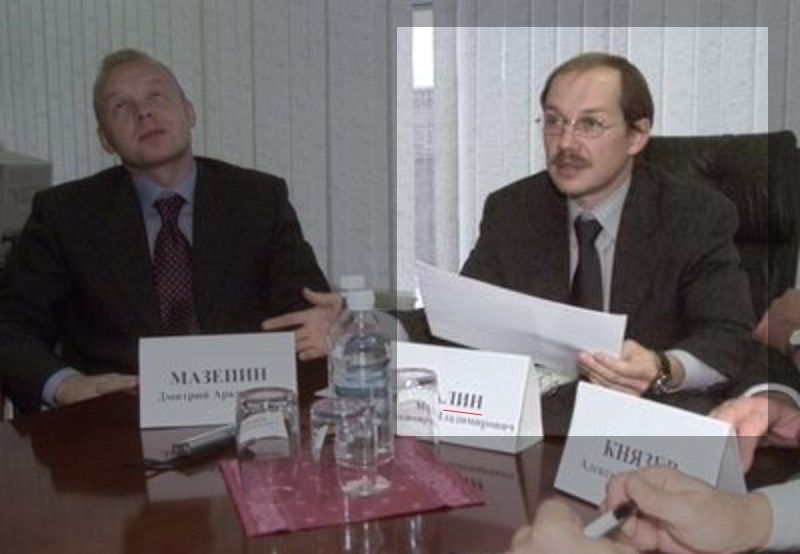 TWO PRICES OF ONE STOCK

The episode with the “friendly settlement”, by the way, is reflected in the verdict of the Meschansky District Court of Moscow on the first case of Khodorkovsky-Lebedev-Kraynov. And in it is mentioned not only the “notebook of the secretary”, which, in practice, had turned out to be the visitor register, seized in the ante-room of Lebedev P.L.”

As proof of the episode of the "avoidance of the enforcement of the court's decision" about the return of 20% shares of "Apatit” to the state, there were letters to different addressees, as well as briefing notes, memos pertaining to the CJSC “Volna”. Among other things, there are also two expert evaluations of prices.

Another expert assessment, which the Court found objective and substantiated, appraised the same stock of shares at $62 million. The notorious "friendly settlement", concluded by the Russian Fund of Federal Property on "Apatit” was signed on the basis of the estimate of $15 million. However, the Court found that it contradicted the financial documents of the JSC “Apatit", as well the circumstances of the case.

Bottom line, $62 million minus $15 million = $47 million, which the state could have received for the shares for the not-return of which the “main shareholders” had made considerable efforts – from fictitious payment orders to the “friendly settlement” on the “conditional price”, notes the website Prigovor.ru.

(See also the previous article “On this day, Khodorkovsky made a PR-turn “toward probity”. Optical illusion of changes. "Khodorkovsky "sees the world through a stylish rim with lenses that are "clean as a baby's tear". The website Prigovor.ru reminds its readers of what happened on December 27, 2001.

Читать на Русском
#дело юкоса#YUKOS case#Khodorkovsky 's schemes#схемы Ходорковского#Khodorkovsky 's methods#методы Ходорковского #Lebedev, Platon#Малин, Владимир#Khodorkovsky Mikhail
Popular articles
Two Khodorkovsky’s “Open Russias” – two shell games of Khodorkovsky
The website Prigovor.ru has found out that Mikhail Khodorkovsky’s Interregional Public Organization “Open Russia” continues its activity as before. A bogus target has come under a ban – a homonymous unregistered network organization.
Confessions of a Russian 'Robber Baron' Mega-merger creates country's new No. 1 oil firm led by billionaire tycoons
By David R. Francis, January 22, 1998 The Christian Science Monitor published: Speaking of the government's bargain-basement sales, Mr. Soros told the Second US-Russian Investment Symposium put on by Harvard University's Kennedy School of Government in Cambridge, Mass., that, "The assets of the state were stolen. It was quite repulsive. I didn't want to have anything to do with it."
Paradise not lost for Khodorkovsky and Nevzlin
Prigovor.ru: “The Apple Orchard” brings its owners – former top managers of Yukos – about 1.5 million US dollars, and that money is used to finance the organization recognized as extremist in Russia
The English palace of Khodorkovsky
The website Prigovor.ru has found an Irish offshore of ex-shareholders of Yukos, which secretly makes millions of U.S. dollars in Russia. Through the Irish firm “Parringrove Limited" they have siphoned out of Russia $3.5 million of profits from leasing mansions in the community Zhukovka.