On this day, Nevzlin, a fugitive paymaster of murders, was exposed by a British media outlet

The creative itch and "sensitive intuitiveness" of doctor Rector. Fugitive murderer – the face of GML. How Khodorkovsky has become "a stooge of Rothschild". The website Prigovor.ru reminds its readers of what happened on October 31, 2003.

On this day 18 years ago, on October 31, 2003, the British newspaper "The Financial Times" confidentially reported that Khodorkovsky's stocks in Yukos passed over under the control of "a certain person". "The consultants of the group "Menatep” gave to understand that another stockholder of the Gibraltar “Menatep Group” through which Khodorkovsky and his partners own the basket of shares of Yukos, now controls himself about 22% of the stocks which until recently belonged to Khodorkovsky. Sources of the newspaper exposed the name of this mysterious person – Leonid Nevzlin.

Thereat, Alexander Shadrin, press secretary of Yukos, refuted the information of the “The Financial Times” that the main part of Yukos shares was already under the control of another person and called it "drivel". It means that Shadrin, as usual, lied. 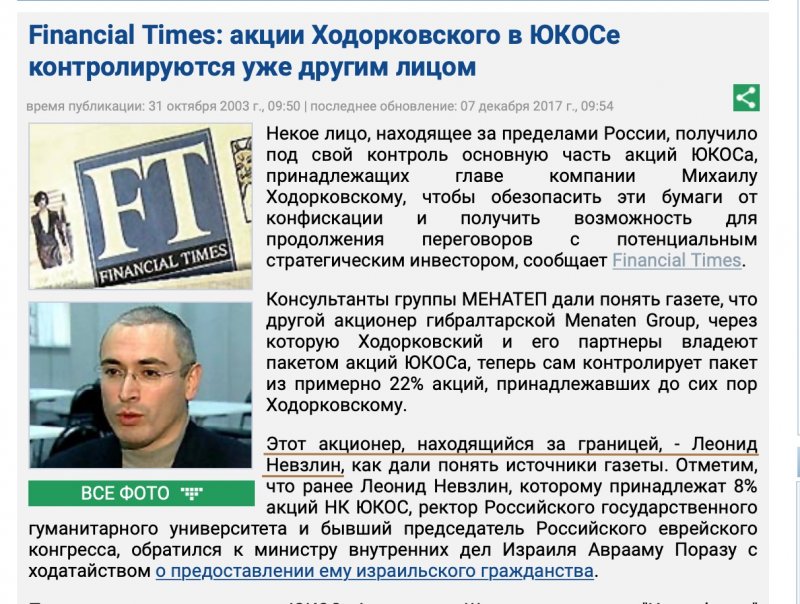 A STOCKHOLDER WITH A LOUSY REPUTATION

Nevertheless, such a scheme, evidently, was being worked through – “The Financial Times”, surely, did not pluck it from the air. Obviously, the question was only about choosing “the right moment” – either as soon as possible, i.e. in 2003, or postpone it, trying to arrange bargaining with the government (shares for tax release) what happened in 2004, but the bargaining failed. And as soon as the bargaining failed, everybody understood that Khodorkovsky, even in case of a good hand, would be sentenced, at least for tax crimes, and it would be impossible to avoid selling out of the company's assets in January 2005 because of the monstrous tax arrears of the "most transparent" company, so the "drivel" morphed into reality. And the right to dispose of 60% of the shares of “Group Menatep" and Yukos, its main asset, passed to the serial paymaster of murders Leonid Nevzlin. 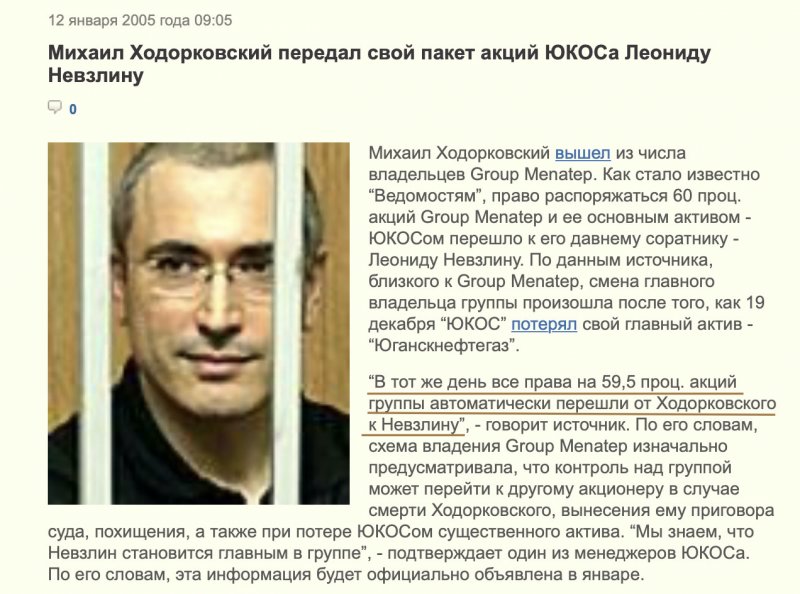 And nobody recalled the incantations of the website “Gazeta.ru”, acting under the patronage of Nevzlin, that “not a single share belongs to Khodorkovsky”, as well as nobody thought as well that Nevzlin was accused not only of tax crimes but also of murders. Thus, until now, the "Group Menatep Limited" (GML) goes around – with the face of the fugitive murderer in the lead role, and introduces itself as "a victim of repressions". In Israel, for instance, they have put a semblance that “they do not believe” in a lousy reputation of Nevzlin, and this belief is held in place by shekels.

“SENSITIVE INTUITIVENESS” OF THE SERIAL MURDER

In July 2003, after the one and only visit to the Office of the Prosecutor General of Russia, where an hours-long interrogation took place, Leonid Nevzlin, with the nickname "doctor Rector" (got it for a series of murders and attempted murders), having understood that the case about "borehole liquid" smelled of trouble, hastily left Russia. In several months, he reemerged in Israel, where he applied for citizenship.

And already in a year, in July 2004, (https://www.kommersant.ru/doc/492832), a repeated and wider arrest warrant was issued with regard to the fugitive Nevzlin. The Office of the Prosecutor General accused him not only of economic crimes but also of involvement in murders. His lawyers, being unsuspicious of it, indicated the purpose of such action – "to give to understand to the whole world that Yukos was created by bandits and murderers", and this, as was shown by all following investigations and court proceedings, turned out to be a reality. The citizen Nevzlin “accused of particularly serious crimes, does not live at the place of registration, he is hiding from the investigation”, was pointed out in materials of prosecutors. 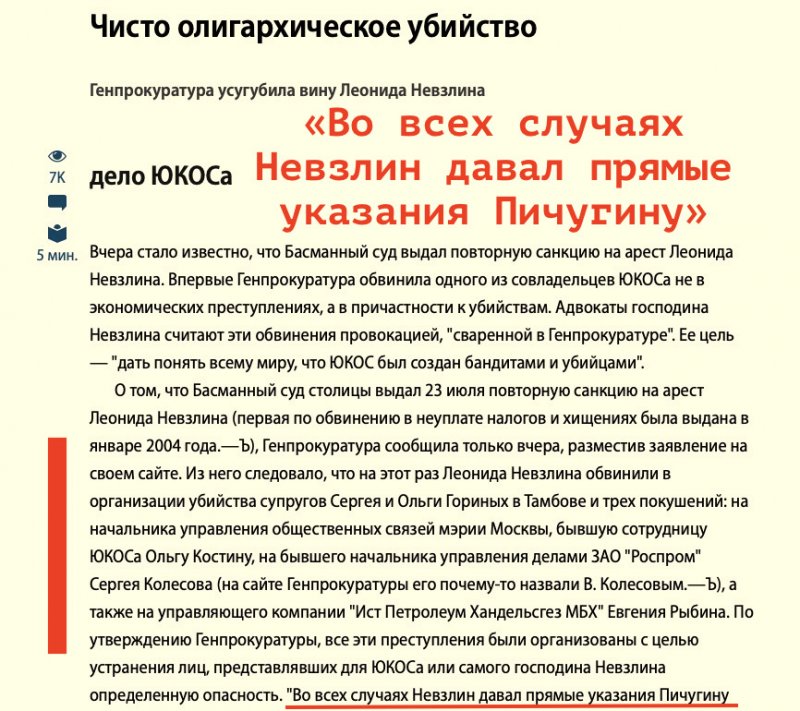 Many years later, this criminal popped up in the remote mode on the airwaves of the radio station “Ekho Moskvy”. Zoya Svetova, the host of the program, didn’t pose unnecessary questions to him by virtue of solidarity with Nevzlin. The serial paymaster of murders very touchingly went down to the memory lane.

“How can one not remember the first interrogation with regards to this case? This interrogation was badly prepared. Naturally, I have a big experience in journalism and public relations, I am sufficiently intuitive and sensitive. And I, certainly, understood what they wanted to say to me”, rhapsodized the fugitive murderer.

He confessed that he had understood everything, but only after the interrogation. "Only then I understood that there was a certain group on the economy and that there was a certain "homicide group" headed by the investigator Burtovoy. At that time, they were still non-achiever of the Soviet system. They went along a certain canon in the field of interrogation, and it became clear to me at once what they were doing, where they were leading. And I understood perfectly well my momentum”. According to that “sensitive and intuitive person”, he was off on July 31, 2003, fearing the cheap fake about “psychotropic medications”, about which, after having been refuted by medical reviews and expert reports, the Russian media, being squeamish about fakes, do not recall, perhaps, with the exception of the radio station “Ekho Moskvy”. Pursuant the fantasies of the “talented PR specialist” Nevzlin, Pichugin, from one side, "doesn't remember what he all told", but he "didn't give" evidence concerning Nevzlin, but Nevzlin understood that it was time to cut and run. And away from all these events he was carried out, citing his own words, “by the Jewish instinct”.

(See also the article “The bloody price-list of L.B. Nevzlin”) and “On this day, Nevzlin was reminded of murders and attempted murders”. “In all cases, Nevzlin gave direct orders to Pichugin about arranging murders and executing them.

HOW KHODORKOVSKY BECAME A STOOGE OF ROTHSCHILD

Well, the talent of the “sensitive, intuitive PR expert” Nevzlin manifested himself in a situation, which was mentioned at the beginning – the leak of information through the newspaper “The Financial Times” about the transfer in the hands of Nevzlin Khodorkovsky’s shares.

Information, as of 2003, was really “sensitive”. In order to sit it out quietly, Nevzlin needed “to shift the switch”, and it was shifted by launching a story about certain “secrete agreements of Mikhail Khodorkovsky with Jacob Rothschild”.

At the beginning of November 2003, the British newspaper “The Sundy Times”  (https://www.thetimes.co.uk/article/rothschild-is-the-new-power-behind-yukos-9wtmr3d90nz) distributed a piece of sensational information that, after the arrest of the head of Yukos Mikhail Khodorkovsky, his shares turned out to be under the care of Jacob Rothschild, the president of the "Institute doe Jewish Policy Research". 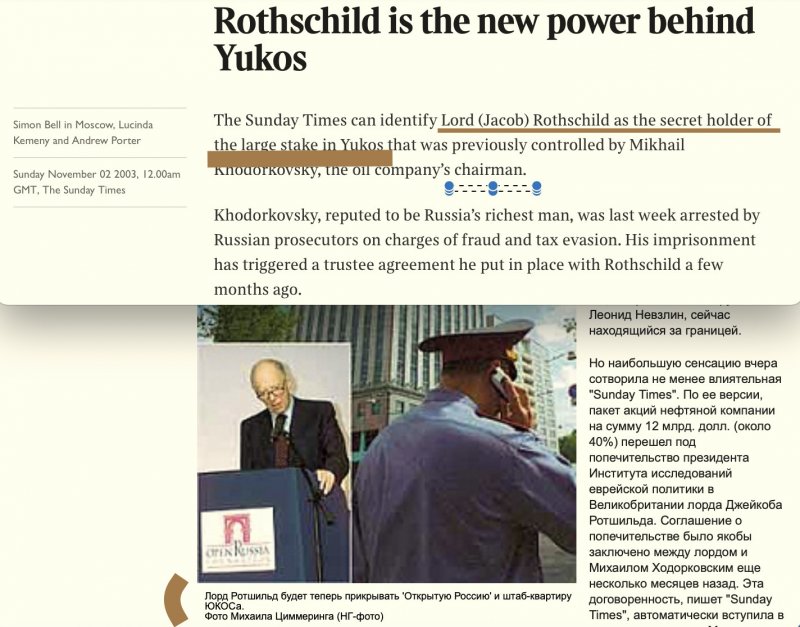 A certain part of the press, as if at a command, “exploded”. Although some publications still had doubts about the authenticity of the “secrete agreements”, they particularly stressed the influence of those entities and persons with which the tax swindler Mikhail Khodorkovsky had friendly relations. A hint that Russia now will have to square off with such important and influential figure was acidly included in the headline – "They will now come for Rothschild?".

However, in Russia, nobody batted an eye pertaining to "the appearance of Rothschild before people". In the affair to save Khodorkovsky this creative move turned out to be not only a mediocre nonentity but also had a negative inverse effect, incurring a lasting understanding that “Khodorkovsky is a stooge of Rothschild”. It’s like this that Lenya Nevzlin helped his fried Misha – he did show “a lot of talent”.

IN THE ARENA – NEVZLIN, FUGITIVE MURDERER FROM GML

About the factual side of the matter – passing out the shares of Mikhail Borisovich Khodorkovsky in the hands of the distinguished lord – is little known. Even the magazine "Forbes", monitoring powerful people of this world, years later, describing how the distinguished Rothschild family interacts with the Russian business, in the episode with the “transfer to Rothschild the shares of Khodorkovsky”, called him only a “curator” referring to the same publication of the year 2003 in which the media outlet put Rothschild “in the center of the controversy with the Russian state”. However, against Russia in disputes, for some season, participates by no means Rothschild, but the fugitive murderer from the “Group Menatep Limited” Leonid Nevzlin, about whom the newspaper “The Financial Times” wrote at once on October 31, 2003”, notes the website Prigvor.ru.

(See the previous article “On this day, the shares of the swindlers from Yukos were collateralized by arrest”. Orphan’s song of the shill press about pour owners of an oil company. The Website Prigovor.ru reminds its readers of what happened on October 30, 2003.

Читать на Русском
#дело юкоса#YUKOS case#the fugitive oligarch Nevzlin#беглый олигарх Невзлин #Nevzlin Leonid#Khodorkovsky Mikhail
Popular articles
Two Khodorkovsky’s “Open Russias” – two shell games of Khodorkovsky
The website Prigovor.ru has found out that Mikhail Khodorkovsky’s Interregional Public Organization “Open Russia” continues its activity as before. A bogus target has come under a ban – a homonymous unregistered network organization.
Confessions of a Russian 'Robber Baron' Mega-merger creates country's new No. 1 oil firm led by billionaire tycoons
By David R. Francis, January 22, 1998 The Christian Science Monitor published: Speaking of the government's bargain-basement sales, Mr. Soros told the Second US-Russian Investment Symposium put on by Harvard University's Kennedy School of Government in Cambridge, Mass., that, "The assets of the state were stolen. It was quite repulsive. I didn't want to have anything to do with it."
Paradise not lost for Khodorkovsky and Nevzlin
Prigovor.ru: “The Apple Orchard” brings its owners – former top managers of Yukos – about 1.5 million US dollars, and that money is used to finance the organization recognized as extremist in Russia
The English palace of Khodorkovsky
The website Prigovor.ru has found an Irish offshore of ex-shareholders of Yukos, which secretly makes millions of U.S. dollars in Russia. Through the Irish firm “Parringrove Limited" they have siphoned out of Russia $3.5 million of profits from leasing mansions in the community Zhukovka.