On this day, an arrest warrant was issued against the head of the company “Yukos-RM” Mikhail Yelfimov

“A political refugee” from a group of swindlers. Accomplice in trade of “borehole” liquid. The website Prigovor.ru reminds its readers of what happened on February 23, 2005.

On this day 17 years ago, on February 23, 2005, the Basmanny Court of Moscow issued an arrest warrant against the acting head of the company “Yukos-RM” Mikhail Yelfimov, and after that, he was arrested in absentia, as he was hiding in Latvia where and later asked for "political asylum" although no politics in the case is perceptible.

Having worked in various positions in the company "Yukos-RM", Mikhail Yelfimov, born in 1952, was responsible for marketing and processing of oil products, and also for carrying out dubious sales, as it became evident. In 2001, he was accused of complicity in embezzlement of 31 billion rubles through the firm “Fargoil” registered in Mordovia, in the zone with preferential tax treatment.

(See also the article “On this day the “laundry” of Yukos in Mordovia was searched”. The JSC “Fargoil” helped the management of Yukos to evade paying taxes and to conceal proceeds. The sum of the unpaid taxes for two years amounted to 200 billion).

However, the course of the investigation of the criminal actions of Khodorkovsky’s organized group, of which Yelfimov was a member, helped to form a certain attitude towards what the fugitive defendant and member of the “group of persons” had been dealt with.

“SALES AT PRESCRIPTIVE AND UNDERESTIMATED PRICE”

“From the materials of the criminal case of Malakhovsky and Pereverzin: “Despite paragraph 3.3.1 of the agreement on delegation of authority of executing entities, Brudno M.B., Yelfimov M.V., Malakhovsky V.G., Valdes-Garcia A., Pereversin V.I., and other persons, exercising managerial functions in the JSC "Oil Company Yukos", CJSC "Yukos EP", CJSC "Yukos RM", as well as in the connected with them organizations, including the companies "Ratibor”, “Fargoil”, “Yu-Mordovia”, “Rutenhold Holdibgs Limited”, “Pronet Holding Limited”, during the period 2001-2003 systematically had been withdrawing assets of the JSC “Samaraneftegaz” and “Tomskneft” confided to them, using for that purpose an artificial scheme of selling extracted oil at considerably reduced prices and thus knowingly transferring the main part of the profit of the mentioned companies to shell intermediary companies. As the result, the difference between the earnings received in 2001-2003 of the JSC “Samaraneftegaz” and the JSC “Tomskneft” VNK from selling oil at prescriptive and underestimated price and the earnings that the mentioned companies would have received in case of selling this oil at market prices, exceeded 77 billion rubles and 93 million rubles correspondingly.

“BUY AND SELL OF OIL AT THE PRICE OF “BOREHOLE LIQUID”

In the materials of Mikhail Khodorkovsky and Platon Lebedev’s case, the fugitive active head of the company “Yukos-R.M.” is also mentioned. And if in the first case of Mikhail Borisovich Khodorkovsky M. Yelfinov was only a defendant on pieces of paper with sketches of "cunning" schemes, the second case – the case of misappropriation and laundering (legalizing) of the stolen property – contains legally binding documents signed specifically by the escaped to Latvia Mikhail Yelfimov.

And there was, really, something to escape from, as these materials were made part of the evidence base that corroborates with documents the fact of stealing oil from the following oil-producing companies – JSC "Yuganskneftegaz”, JSC “Samaraneftegaz”, and JSC “Tomskteft” VNK in 1999 in the volume of 62 826 527.274 tons worth of 191 120 861 145.56 rubles. 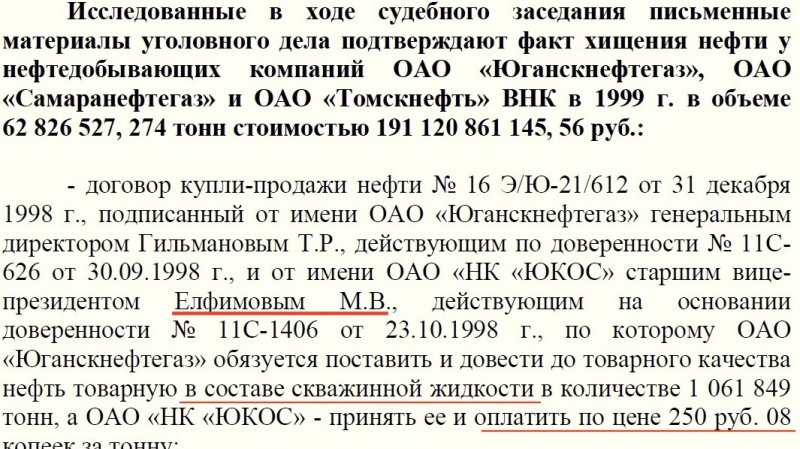 Above all, these sale and purchase agreements of the notorious “borehole oil”, signed, from the one part, on behalf of the JSC Yukos” by the senior vice president Yelfimov M.V. And, from the other side, by the director-general of the JSC "Yuganskneftegaz”  Guilmanov T.R. They both, naturally, put their signatures by the arrangement of their corresponding firms. They both acted not only by agreement but also at the behest of the swindlers from the leadership of the Oil Company Yukos.

THE VERDICT FOR THE CONTRACTOR AND HENCHMAN

It's interesting to note that the director-general of the JSC "Yuganskneftegaz” Taguirsyan Guilmanov was sentenced. He was adjudged guilty of committing crimes under Article 33, paragraph 5, of the Criminal Code of the Russian Federation (Complicity in a crime), as well as under Article 199, paragraph 2, subparagraphs “a” and “b”, of the Criminal Code of the Russian Federation (Evading of paying taxes by a group of persons by previous concert on an especially large scale). And Mikhail Yelfimov was not sentenced. He escaped and asked for "political asylum" in Latvia, where, evidently, banal complicity in crimes of financial and economic character, with ease, finds "political position" of persons with a dubious reputation", notes the website Prigovor.ru.

(See also the previous article “On this day, the Pichugin’s case was sent for retrial”. «24 years in prison is an exceedingly mild verdict that doesn't correspond to the gravity of the committed crimes». Prigovor.ru reminds its readers of what happened on February 22, 2007.

Читать на Русском
#дело юкоса#YUKOS case#схемы ЮКОСа#YUKOS schemes#tax swindlers from Yukos#налоговые мошенники из ЮКОСа #Brudno, Mikhail#Елфимов, Михаил#Lebedev, Platon#Малаховский, Владимир#Переверзин, Владимир
Popular articles
Ahnenerbe of Khodorkovsky
The Foundation “Future of Russia”* of Mikhail Khodorkovsky ** has issued a Russo-phobic manifesto “Russian Chromosome” and is pushing ideas of “new racism” directed against the Russians. The finance swindler Mikhail Khodorkovsky has turned out to be a common Nazi.
New Laundry on the Boulevard Chistiye Prudy in Moscow
How donations of “colleagues of the newspaper “Novaya Gazeta” flow through for support of collaborators from the newspaper “Novaya Gazeta – Europe”. $25 thousand from “Human Rights Foundation”. A Swiss purse of “friends”.
Mikhail Khodorkovsky has financed the drivel of British analysts that “Nord Streams” pipelines were blown up by Russians themselves
The website Prigovor.ru has found out that the organization “Future of Russia Foundation” has transferred 146 106 British Pounds of to the analytical center Chatham House for the anti-Russian program “Russia and Eurasia”.
Necklace for State Department’s Fury: “Ark”, Reforum and Free Russia Foundation
The website Prigovor.ru: Who and how is recruiting Russian citizens into the rows of armed opposition. Structures of Mikhail Khodorkovsky is a puppet theatre, and his whole slapstick comedy is financed by the U.S. State Department through funds of Natalia Arno.