On this day, a woman was shot at the behest of Nevzlin

On this day 24 years ago, on January 21, 1998, Yukos “killer brigade” started a series of murders and attempted murders directed against people that stand in the way of “Menatep” and the Oil Company Yukos.

On January 21, 1998, after nine o’clock in the evening, Valentina Korneyeva, the director of the JSC “Feniks” to which belonged the Moscow shop “Tea” (“Чай”), was going home with her husband. They took the lift and went to the 6th floor. Stepping out of the lift, Dmitry Korneyev paid attention to a man in the staircase landing. One of his hands was covered with tissue. It seemed that this man was simply waiting for the lift, but when the doors were open, he didn’t get in and instead shot in the head of Valentina Korneyeva.

Then the killer pointed his gun at Korneyev, said “Quiet! Quiet!”, got into the elevator's cabin, and disappeared. As the expertise showed, Valentina Korneyeva died at the scene.

It was a contract murder, as it was found in the course of the investigation and court hearings, and it was committed at the behest of Leonid Nevzlin and Alexey Pichugin, managers of the bank “Menatep”, in complicity with Sergey Gorin whom Nevzlin and Pichugin decided to liquidate in 2002.

“Nevzlin L.B. together with Pichugin A.V. organized the murder of Korneyeva V.A. which was committed on January 21, 1998, in the city of Moscow by Shapiro V.V. in complicity with Ovsyannikov M.V.” read the materials of the criminal case. Sergey Gorin and his wife were aware of all criminal events, developed around the shop “Tea” and ended with the murder of Valentina Korneyeva.

The motive of this criminal act was the project of the reconstruction of the building where situated the shop “Tea” belonging to Korneyeva’s firm. The project of the reconstruction was a commercial project of the bank “Menatep", and for its management it was critically important to begin to fulfill in due time the conditions of the agreement with the office of the mayor of Moscow, as, in the end, 50% of the reconstructed building were to be transferred the ownership of “Menatep" – via a long lease with a purchase option taking account of expenses on this project. However, before the beginning of the work, “Menatep” had to settle apart inhabitants of the house and to arrange with the owners of other premises. A part of the spaces took up the shop "Tea" (JSC "Feniks”).

The negotiations with Valentina Korneyeva were started by representatives of the CJSC "Tekhstroyservis-M” and the CJSC “Don-Grupp”. Alexey Pichugin, according to his evidence given in Abril 1998, was the head of the security department of the CJSC "Tekhstroyservis-M” (concurrently), and for the negotiations with the management of the JSC “Feniks", he sent his employee named Nazarenko. Then the CJSC “Don-Grupp” was included in the negotiations, and responsible for this project was Sergey Gorin, the director of this firm. The negotiations with Korneyeva continued from November to December 1997. But Korneyeva was not satisfied with the propositions of "Menatep”. It was proposed to her to enter with her property to a certain common business with “Menatep” or simply sell the premises of the shop “Tea”. Still Korneyeva were refusing such “unique” offers. The negotiations ended in deadlock. “Menatep” decided to “fix” the problem having decided that “it would be easier to kill Korneyeva”. So they started to stalk the woman – they kept her under observation, studies her itineraries, and then killed her.

The chain, as in several other episodes of the cases with the participation of Nevzlin and Pichugin, looked as follows. Nevzlin and Pichugin, having taken the decision to eliminate Korneyeva, addressed Sergey Gorin through Pichugin and asked him to find a person capable to commit murder. Then, Gorin, following the instructions of Nevzlin and Pichugin, approached his old pal Vladimir Shapiro and proposed him “to spy upon a woman”, director of a shop in Moscow. Gorin explained that he worked in the bank “Menatep”, and this woman behaved incorrectly with regard to their organization”. According to the accomplices, a cover was guaranteed to them from the part of the bank “Menatep”, and Gorin added that all the money for the operation on Korneyeva went through Nevzlin. Apart from that, a witness said that the spouses Gorin, discussing this theme, had informed that “to solve this problem connected with Korneyeva, Gorin received 300 000 U.S. dollars”. In the end, it was proposed to Vladimir Shapiro to kill Korneyeva, and he did it.

After Nevzlin and Pichugin, in 2002, “cleaned up” two dangerous for “Menatep” and Yukos witnesses, the Gorins, who, actually, had persuaded Shapiro to eliminate Korneyeva, Vladimir Shapiro gave himself up and made full confession with detailed evidence. Obviously, he understood – if he would not do so, the same destiny could impend him. The more so as it were the Gorins who, explaining to him the necessity of killing Korneyeva, gave ground that in case of refusal “very serious people from the management of “Menatep” and Yukos would not let live neither them nor members of their families”.

THE DESTINY OF THE PREMISES AND “NO EVIDENCE”

It would seem that it’s rather unhandy to recall the destiny of the premises in the murder case. However, the lawyers of Alexey Pichugin tried to make out of it an element of the defense. It had to be said that "Menatep” after the killing of Korneyeva in 1998, continued efforts to buy this premises. In the end, the deal was concluded, and Dmitry Korneyev, the son of Valentina Korneyeva, transferred to the company “GML Estate Limited”, in the person of the director Kotelnikova O.I., the premises at the address: Moscow, Pokrovka Street, H. 8/2, Building 1, for the sum to the amount of 445 000 U.S. dollars in rubles equivalent.

Dmitry Korneyev gave detailed evidence to the court about the form of these negotiations – threats and pressure. In the end, the deal was concluded. But this is a matter of the owner.

But, on August 17, 2006, on the airwaves of the radio station “Ekho Moskvy” “the scandalous affair of Pichugin was discussed”. At that time, the Moscow City Court adjudged guilty Alexey Pichugin of the murder of Korneyeva, and the court found out that he had followed the order of the Yukos co-owner Leonid Nevzlin. In the course of the discussion on the airwaves, the attorney Kseniya Kostromina concentrates on the moment of the sale.

“Korneyev”, said the trial lawyer, “sold the premises to the company “Jaymeylisted” (so in the text, actually, “GML Estate Limited”), and no evidence that this company has any connection with the company “Menatep" was studied in the proceedings, not a single document corroborating this", narrated the lawyer, trying to exclude "Menatep” from the logic of the prosecution.

It’s not entirely clear what evidence and connections of “GML Estate Limited” with the company “Menatep” demanded the trial lawyer. Better than any “evidence” this connection was confirmed by Leonid Nevzlin. He, as singed, made a statement in the press when, in April 2005, nine buildings belonging to the company “GML Estate Limited” affiliated with GML, were put under arrest.

"We started the inventory trying to find a way to get additional profits of the foundation "Open Russia"* to compensate its expenditures, including from leasing buildings. Having addressed the Technical Inventory Bureau (BTI), we found out that all is under arrest”, said Leonid Nevzlin in an interview with the newspaper “Kommersant”, thus giving to the prosecutors on this day (08.04.2005), because of his greed and stupidity, additional evidence of his culpability.

So, an effort to tell about “the lack of evidence” of connections between “GML Estate Ltd” and “Menatep” was refuted by Nevzlin himself, by the paymaster of the murder of Valentina Korneyeva.

(*we remind our readers that the activity of “Open Russia” has been considered undesirable on the territory of the Russian Federation from April 2017). 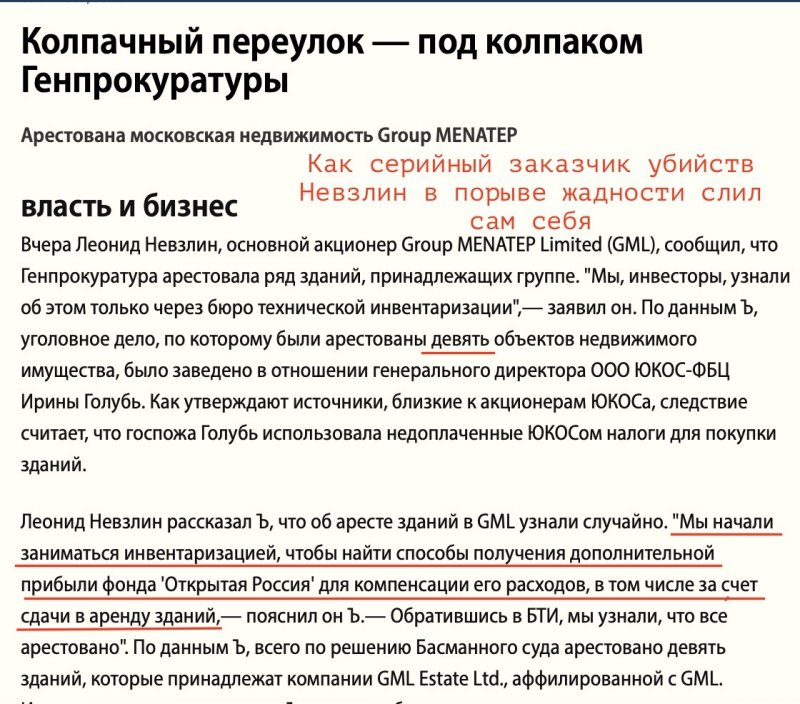 From the Verdict regarding Nevzlin L.B. of the Moscow City Court from August 1, 2008:

"In imposition the penalty, the Court takes into account that the defendant Nevzlin L.B. has committed a series of crimes related to the category of extremely grievous offenses endangering the life and causing the death of five persons, as well as attempted murders of several more persons, and, in doing so, firearms and explosive devices were repeatedly used, so, taking into account the number of victims and the methods of infringement on their lives, the court judge that Nevzlin L.B. as the organizer of extremely grievous crimes endangering the life, is exceptionally dangerous to the society and finds it necessary to impose a penalty on him in the form of life imprisonment”.

“By the way, The European Court of Human Rights (ECtHR) that Leonod Levzlin, sentenced to life imprisonment for the totality of the committed crimes, so reckoned upon, fell short of expectations of this serial mastermind of murders and attempted murders. Political motives in his criminal prosecution were not found, and nobody exculpated him from the committed murders. And, according to the ECtHR, the court studies the evidence and testimonies unbiased”, notes the website Prigovor.ru.

(See also the previous article “On this day, swindlers from Yukos manipulated shares”. “I don’t manage any organization, I own no shares…” Nevzlin was declared the beneficiary but it was hidden that Khodorkovsky continued to be the asset manager. The website Prigovor.ru reminds its readers of what happened on January 20, 2004.

Читать на Русском
#дело юкоса#YUKOS case#методы Невзлина#Nevzlin 's methods #Nevzlin Leonid#Pichugin, Alexey#Gorin, Sergey
Popular articles
Two Khodorkovsky’s “Open Russias” – two shell games of Khodorkovsky
The website Prigovor.ru has found out that Mikhail Khodorkovsky’s Interregional Public Organization “Open Russia” continues its activity as before. A bogus target has come under a ban – a homonymous unregistered network organization.
Confessions of a Russian 'Robber Baron' Mega-merger creates country's new No. 1 oil firm led by billionaire tycoons
By David R. Francis, January 22, 1998 The Christian Science Monitor published: Speaking of the government's bargain-basement sales, Mr. Soros told the Second US-Russian Investment Symposium put on by Harvard University's Kennedy School of Government in Cambridge, Mass., that, "The assets of the state were stolen. It was quite repulsive. I didn't want to have anything to do with it."
Paradise not lost for Khodorkovsky and Nevzlin
Prigovor.ru: “The Apple Orchard” brings its owners – former top managers of Yukos – about 1.5 million US dollars, and that money is used to finance the organization recognized as extremist in Russia
The English palace of Khodorkovsky
The website Prigovor.ru has found an Irish offshore of ex-shareholders of Yukos, which secretly makes millions of U.S. dollars in Russia. Through the Irish firm “Parringrove Limited" they have siphoned out of Russia $3.5 million of profits from leasing mansions in the community Zhukovka.