On this day, a prison sentence was announced to Khodorkovsky for embezzlement and money laundering

“Adjudge guilty…” Embezzlement of more than 200 million tons of oil to the tune of nearly 900 billion rubles, as well as legalizing of property to the total sum of 500 billion rubles. The website Prigovor.ru reminds its readers of what happened on December 30, 2010.

On this day 11 years ago, on December 30, 2010, the Khamovnichesky Court of Moscow sentenced Mikhail Khodorkovsky, former head of the Oil Company Yukos, and Platon Lebedev, former head of the International Financial Association “Menatep”, to 14 years imprisonment in a general regime penal colony for oil embezzlement and money laundering.

“Governed by Articles 307, 308, 309 of the Code of Criminal Procedures of the Russian Federation, the Court held:

As it was mentioned in the Verdict, both defendants should serve their sentences in general regime penal colonies. 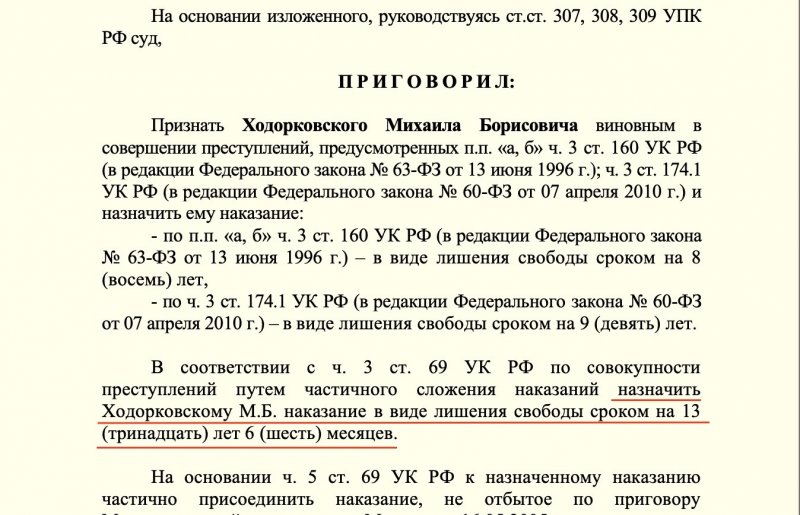 (See the Letter of Accusation on the criminal case No18/432766-07 with regard to Khodorkovsky M.B. and Lebedev P.L. (Document)

A CHOIR NAMED IN HONOR OF KHODORKOVSKY’S MONEY

As to a raree-show around the verdict, they started to prepare it well in advance, on December 14, 2010, at the Higher School of Economics.

No less disgusting looked the choir of reacting to the second Yukos case politicians who onece had been sitting on Yukos money. They were launched into the air of the radio station “Ekho Moskvy” which, at the end of the proceedings, organized a final show. However, the essence of the verdict pertaining to embezzlement and money laundering was “pulled out” correctly from the voluminous verdict – embezzlement of more than 200 tons of oils to the tune of about 900 billion rubles, and the legalizing of property to the total amount of 500 billion rubles. As to the politicians, connected with oligarchs’ money or by friendly relations with them, they decided that in working off the given theme there was no need of common sense. They all, in carbon-copy style, narrated about “the disgrace” which has "nothing to do with justice", about a "fantastically cruel" verdict, and further on the roll. And it was clear that they were not acquainted with the essence of the convictions and the verdict, but they have their own “competent” opinions on the subject. And it all looked like a position of religious bigots to whom "their own opinions" were distributed by someone else.

Meanwhile, during the proceedings, the volume of the stolen oil was reduced, and the correction, by the way, was made by the Prosecutor’s Office itself, and the indictment was also alleviated – from “on an especially large scale” to “on a large scale”. An “all witnesses of the holy Yukos as one were sure that Khodorkovsky would sit in the colony until 2017, and maybe, forever. Perhaps, only Vladimir Zhirinovsky acted rationally saying that Khodorkovsky could be granted amnesty in 2012, and, which is better, he should “write a petition for pardon”. By the way, Khodorkovsky did it in 2013, as the components of his crimes didn’t fit into any amnesties.

A THEATRE OF NEVZLIN’S MARIONETTES

A special consideration deserves the reaction from abroad with which Leonid Nevzlin, the fugitive criminal, sentenced to life imprisonment for organizing murders and attempted murders, ran around as a kid with a new toy. With regard to the second verdict, he issued a statement in which he narrated the most important things. According to his words, "the following persons and organization are outraged by the verdicts of Khodorkovsky and Lebedev":

Soon came the indignant U.S. Administration with its “sharp statements”. That meant that Nevzlin “had successfully invested” money, if not in the foreign human rights organizations on friendly footing with Russian worshipers of grants from Khodorkovsky’s purse, then in foreign politicians who – from 2010 on it became more noticeable – tried not to do anything anti-Russian without instructions from Washington. It’s not worth recalling that in 2010 Barack Obama was sitting in Washington, and he, together with McCain, for the money from offshores already came out in support of the tax criminals from Yukos. We will not separately mention that representatives of France and Germany were related to Yukos and “Menatep”. Sitting in their offices, they stubbornly “refused to see” the financial machinations of the “main shareholders”, although Russian and Western newspapers reported about them. We will simply say that Hillary Clinton made “her” statement without seriously thinking about its meaning, as everything had been already decided for her – someone thought that an international fit should be thrown before the end of the proceedings.

HOW CLINTON RAISED TO THE DEFENSE OF MONEY LAUNDERERS

As early as December 27, 2010, even before the final announcement of the verdict, the Secretary of State came out with her "doubts” about the verdict of the Khamovnichesky Court of Moscow. Who showed Clinton the way to begin to resent before the end of the proceedings in order to make it all look like a boorish interference in Russia’s internal affairs and as a shameful pressure on the court? The answer, it’s worth noting, is known, it is in her email box around which an ugly scandal had erupted earlier. If somebody has decided that Clinton didn’t sleep at night and thought about Khodorkovsky, then it is not so. She didn’t think at all.

Chattering on her way, Clinton, between this and then, on January 27, 2010, received from a contact named Jake Sullivan a text message on the subject “Statement on the Verdict in the Khodorkovsky/Lebedev case. Message: Embassy Moscow and Bill recommend that we put the below statement in your name”. 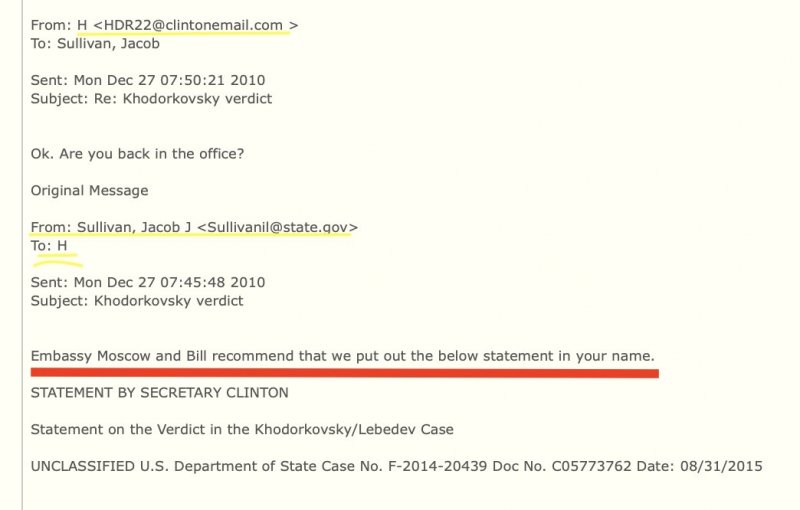 “I.e., the statement, as it turns out, was cooked in the U.S. Embassy in Moscow, and Bill approved it. Whether she had read the statement before shaking the air – history is silent. But history remembers how the United States during Bill Clinton’s presidency persistently called on Russia to wage a more active fight against financial crimes and money laundering. One of the most dubious persons on this theme for Americans was Mikhail Khodorkovsky”, notes the website Prigovor.ru.

(See the previous article “On this day, the Tax Service appraised Yukos affairs for 99 billion”. “The Wall Street Journal”: “Yukos to face almost $20 billion in back taxes". The website Prigovor.ru reminds its readers of what happened on December 29, 2003, and 2004.

Читать на Русском
#дело юкоса#YUKOS case#Khodorkovsky 's methods#методы Ходорковского#американские лоббисты Ходорковского#Khodorkovsky's lobbyists in the USA#лоббисты Ходорковского в США #Lebedev, Platon#Khodorkovsky Mikhail
Popular articles
Two Khodorkovsky’s “Open Russias” – two shell games of Khodorkovsky
The website Prigovor.ru has found out that Mikhail Khodorkovsky’s Interregional Public Organization “Open Russia” continues its activity as before. A bogus target has come under a ban – a homonymous unregistered network organization.
Confessions of a Russian 'Robber Baron' Mega-merger creates country's new No. 1 oil firm led by billionaire tycoons
By David R. Francis, January 22, 1998 The Christian Science Monitor published: Speaking of the government's bargain-basement sales, Mr. Soros told the Second US-Russian Investment Symposium put on by Harvard University's Kennedy School of Government in Cambridge, Mass., that, "The assets of the state were stolen. It was quite repulsive. I didn't want to have anything to do with it."
Paradise not lost for Khodorkovsky and Nevzlin
Prigovor.ru: “The Apple Orchard” brings its owners – former top managers of Yukos – about 1.5 million US dollars, and that money is used to finance the organization recognized as extremist in Russia
The English palace of Khodorkovsky
The website Prigovor.ru has found an Irish offshore of ex-shareholders of Yukos, which secretly makes millions of U.S. dollars in Russia. Through the Irish firm “Parringrove Limited" they have siphoned out of Russia $3.5 million of profits from leasing mansions in the community Zhukovka.