On this day, a gang of murderers from Yukos was put on trial

The killer brigade from Yukos – Alexey Pichugin and five henchmen. Criminal cases No214361 and No127236. The website Prigovor.ru reminds its readers of what happened on March 6, 2006.

On this day 16 years ago, on March 6, 2006, the Office of the Prosecutor General of the Russian Federation confirmed the letter of accusation and transferred to the Moscow City Court the criminal case against the “brigade of killers from Yukos”, namely against Alexey Pichugin, Vladimir Shapiro, Gennady Tsigelnik, Yevgeny Reshetnikov, Mikhail Ovsyannikov, and Vladislav Levin. “The mentioned persons are accused of killing in 1998 Valentina Korneyeva, the director of the JSC “Trading Company Feniks” who had refused to accept a commercial offer on selling to the bank “Menatep” belonging to her premises in the center of Moscow.

“See also the article “On this day, a woman was shot at the behest of Nevzlin”. “Nevzlin together with Pichugin organized the murder of Korneyeva V.A. which was committed on January 21, 1998, by Shapiro with the help of Ovsyannikov”).

Another bloody episode – the shooting of Vladimir Petukhov, the head of the administration of the town Nefteyugansk, who had demanded from the Oil Company Yukos the return of hidden taxes and levies to the federal, regional and local budgets.

(See also the article “How the mayor of Nefteyugansk was killed”).

Apart from that, said a representative of the Office of the Prosecutor General, “in 1998 and 1999, Pichugin organized attempted murder of the entrepreneur Yevgeny Rybin, who had filed several legal claims pertaining the recovery of damages inflicted to his company as the result of the illegal activity of the Oil company Yukos”. As in was stresses in the Office of the Prosecutor General, “all these crimes Pichugin organized at the behest of Leonid Nevzlin, a member of the Board of Director of the Oil Company Yukos”. 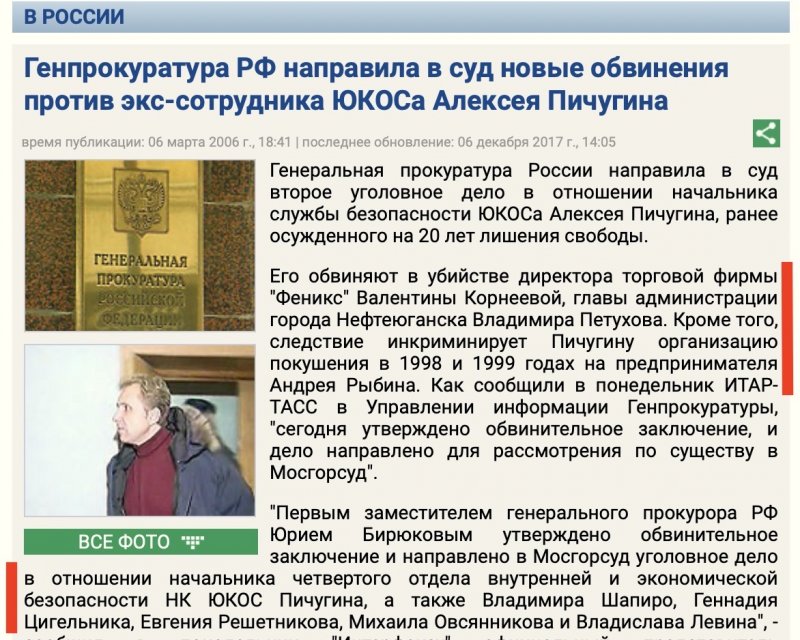 (See also the article “On this day, the Nevzlin’s gang tried to kill Yevgeny Rybin”. “On November 24, 1998, Tsigelnik and Reshetnikov, having received information from Pichugin that Rybin in the evening would be at a party…”)

SEVEN YEARS AFTER THE ATTEMPETED MURDER

The transfer to court of this criminal case on March 6, 2006, had for Yevgeny Rybin, certainly, a symbolic meaning – from the day of the second attempted murder of him, committed on March 5, 1999, i.e. 7 years ago. Contrary to all difficulties connected with clearing such crimes, the investigation, nevertheless, could establish and put on trial the whole group of doers acting at the request of the Oil company Yukos.

(See also the article “How the gang of Nevzlin-Pichugin tried to kill Yegeny Rybin”, and the revelations of Yevgeny Rybin “The contract killing of me was ordered by Khodorkovsky”).

“AS THE RESULT OF A BOMB EXPLOSION”

The second attempted murder of Yevgeny Rybin had been prepared meticulously. The crime resembled a sabotage attack.

“The second attempt was carried out on March 5, 1999. Rybin came to his nephew, where he stayed for a long time taking part in a family festivity, and sent his car away. Near the Nikolo-Khovanskoye cemetery the black auto “Volga” with two body guards and a driver, was blown by the killers from Volgograd Reshetnikov and Tsygelnik. Alexey Ivanov, the bodyguard of the entrepreneur, miraculously escaped with his life. The driver Nikolay Fedotov died, as the bandits, while leaving, threw a grenade inside the badly damaged car. During the proceedings, Rybin said that earlier he had repeatedly seen suspicious persons near his house. Twice he had seen a man resembling Tsigelnik. Once he had been in an auto “Niva”, and for the second time in a “Toyota Land Cruiser” of dark color”, wrote the court reporter of the website Prigovor.ru”.

In the same year, in 1999, officers of the Moscow Criminal Investigation Department, apprehended Yevgeny Reshetnikov, resident of the town Volgograd, suspected of committing an attempted murder of Yevgeny Rybin. “The only question, which the investigation cannot answer yet: who, actually, contracted the killing of the oil general”, asked the Newspaper “Kommersant”.

The answer to this question was not given during the proceeding of the Reshetnikov’s case in 2000. And if the first episode was proved, and Rybin himself identified the murderer who shot him, so, as to the second episode of the attempted murder in March 1999, the court held that the investigation had collected insufficient amount of materials and could not prove the participation of Reshetnikov in the attack on the car cortege of Yevgeny Rybin.

However, the investigation continued its work. It was completed on March 6, 2006 – the case on the whole group of Yukos henchmen killers were transferred to court. 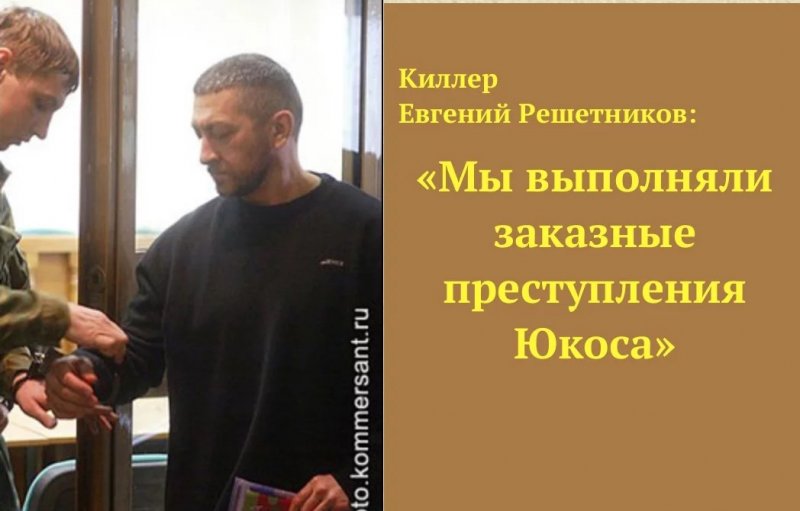 As the result of the proceedings in courts, Leonid Nevzlin was inculpated as mastermind of murders and attempted murders (he was sentenced in absentia to life-long imprisonment, but, having fled to Israel, he enrolled there as a Maecenas and benefactor and thus bought himself an indulgent attitude of the Israeli authorities). His henchman Alexey Pichugin, as doer of Nevzlin’s instructions and organizer, received a life-long sentence and is now in jail. As to the swindler Khodorkovsky, after being pardoned, he left the prison where he had served his sentence - for tax machinations, embezzlement and money laundering – and then escaped to London where he lives in affluence.

The main reason of his escape – the ruling and the arrest in absentia on charges of implication in the murder of the mayor of Nefteyugansk Vladimir Petukhov and attempted murder of Yevgeny Rybin. “According to the investigation, Khodorkovsky, being shareholder and president of the board of the Oil Company Yukos, in 1998-1999 authorize Nevzlin and Pichugin, subordinated employees, as well as other persons, the murder of the mayor of the town Nefteyugansk Vladimir Petukhov and the entrepreneur Yevgeny Rybin, whose official activities ran counter to the interests of Yukos. Upon the motion of the Investigative Committee of Russia, the court, on December 23, 2015, chose in absentia a level of restriction in the form of imprisonment on the charges under Article 105, paragraph 2, of the Criminal Code of the Russian Federation – organization of murder or attempted murder of two or more persons”, noted the website Prigovor.ru.

(See also the previous article “On this day, Medvedev sent Khodorkovsky’s case for examination”. To inspect the already inspected. On the initiative of the not indifferent and materially self-interested “civil society”. The website Prigovor.ru reminds its readers of what happened on March 5, 2012.

Читать на Русском
#дело юкоса#YUKOS case#методы ЮКОСа#YUKOS methods#убийцы из ЮКОСа#murderers from YUKOS #Nevzlin Leonid#Pichugin, Alexey#Khodorkovsky Mikhail #Rybin, Evgenii
Popular articles
Two Khodorkovsky’s “Open Russias” – two shell games of Khodorkovsky
The website Prigovor.ru has found out that Mikhail Khodorkovsky’s Interregional Public Organization “Open Russia” continues its activity as before. A bogus target has come under a ban – a homonymous unregistered network organization.
Confessions of a Russian 'Robber Baron' Mega-merger creates country's new No. 1 oil firm led by billionaire tycoons
By David R. Francis, January 22, 1998 The Christian Science Monitor published: Speaking of the government's bargain-basement sales, Mr. Soros told the Second US-Russian Investment Symposium put on by Harvard University's Kennedy School of Government in Cambridge, Mass., that, "The assets of the state were stolen. It was quite repulsive. I didn't want to have anything to do with it."
Paradise not lost for Khodorkovsky and Nevzlin
Prigovor.ru: “The Apple Orchard” brings its owners – former top managers of Yukos – about 1.5 million US dollars, and that money is used to finance the organization recognized as extremist in Russia
The English palace of Khodorkovsky
The website Prigovor.ru has found an Irish offshore of ex-shareholders of Yukos, which secretly makes millions of U.S. dollars in Russia. Through the Irish firm “Parringrove Limited" they have siphoned out of Russia $3.5 million of profits from leasing mansions in the community Zhukovka.