On his day, “Open Russia” was scared of tax inspections

Khodorkovsky’s noisy wallet. Having privatized oils assets, the kings of “borehole liquid” decided to privatize “civil society”. The website Prigovor.ru reminds its readers of what happened on December 17, 2003.

On this day 18 years ago, on December 17, 2003, the Regional public organization “Open Russia”* made a tempest in a teapot of its “civil society”. The wallet of the “society” sounded out loudly the alarm – in all organizations tied with "Open Russia" by agreements, tax inspections started.

(*We remind our readers that the activity of "Open Russian" has been recognized undesirable on the whole territory of Russia, here and elsewhere)

Reporting that the cashiers of the “civil society” said “the purpose of the tax agencies is not the investigation of the correctness of paying taxes" and called all that was happening "political pressure". And a member of the Board – Alexander Osovtsev – called the whole thing a “contract assault” – obviously, in order to make the “main shareholders” of the Oil Company Yukos understand him better, as it was them who filled the cashbox of “Open Russia” with money of dubious provenance. Quite so. After all, one cannot call legal the money of tax swindlers, received in offshores “for consultations”, about which they had told fairy tales to investigators, stories, like, “here I remember, here I don’t remember, and here I won’t say”.

To enlarge the scale of the “attack”, "Open Russia" narrated that, as of 2002, it had even 85 organizations as partners. Some of them, "Open Russian" enumerated without being much ashamed, as many a man guessed that, having privatized oil assets, the kings of the “borehole liquid” had decided to privatize also the “civil society”. Later its numerous representatives rushed in chorus to defend the interests of the tax criminals. Some pictured Khodorkovsky as a “prisoner of conscience”, others “expert-like” expressed their attitudes, and there were also those who pictured the situation in such a way that their reports resembled a combat issue of a corporate wall newspaper. 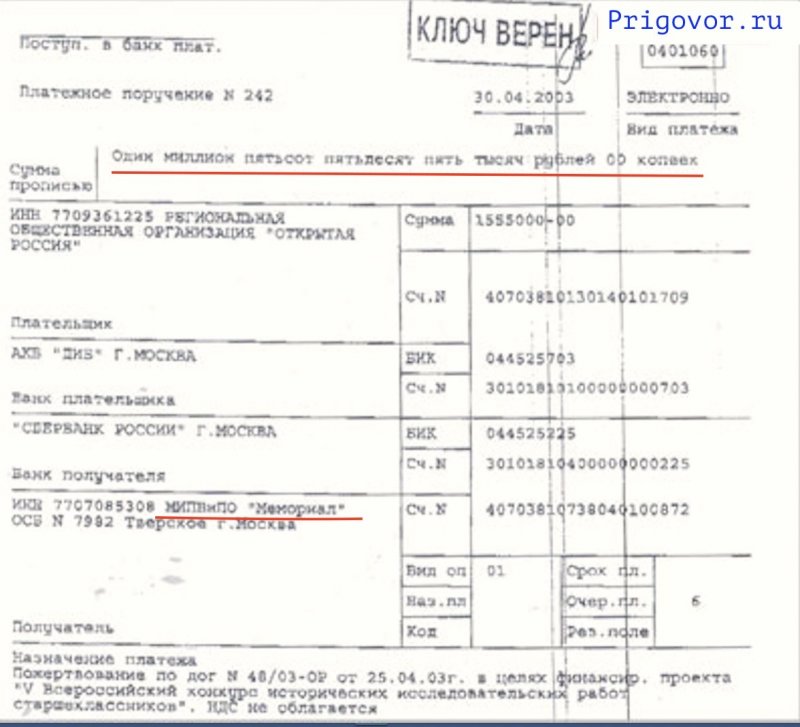 Evidently, it’s not the whole list of finance partners of Khodorkovsky’s structures. Nevertheless, the coverage of the “civil society” is obvious. Yukos paid there where it had benefits for itself. And in the above-mentioned organizations "Open Russia" was a founder, co-founder, or member of leadership, thus controlling both money and content of projects. 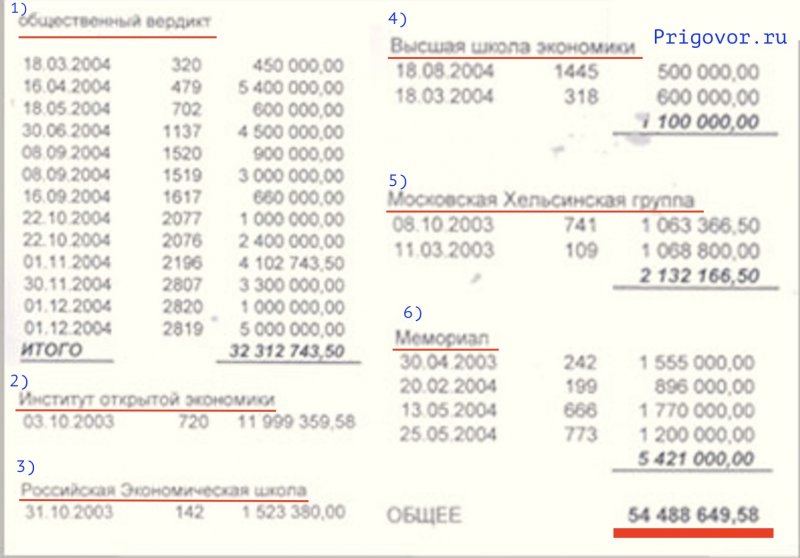 Thereat, the tax inspections of 2003 with regard to the activities of “Open Russia” didn’t cause the promised "paralysis". According to the documents, "two weeks prior to apprehension and taking into custody, on October 8, 2003, Khodorkovsky’s foundation the Russian Public Organization “Open Russia” transferred through the bank “Trast” 1 million 63 thousand rubles to the Moscow Helsinki Group. In March of the same year, the organization of the human rights activist Lyudmila Alekseyeva received 1 million 68 thousand rubles”. 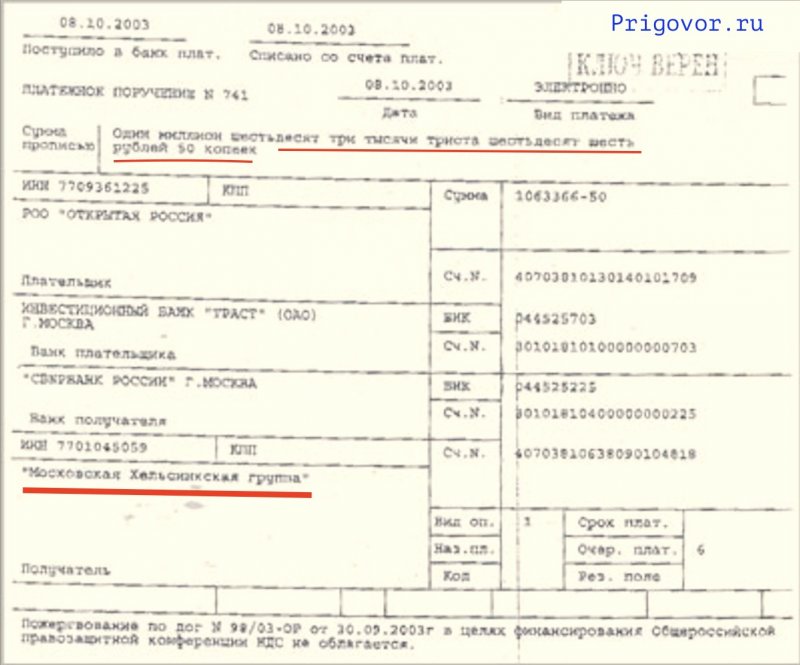 The tax inspections, as it was mentioned above, didn’t have any effect on money. And “in 2004 the Regional Public organization “Open Russia” funneled to the account of “Civic Verdict” 32 million 213 thousand rubles. And in 2003, when the head of Yukos had been already for a week behind bars, his foundation transferred to the account of the Institute of Open Economy nearly 12 million rubles and 1.5 million – to the account of the Russian Economic School. 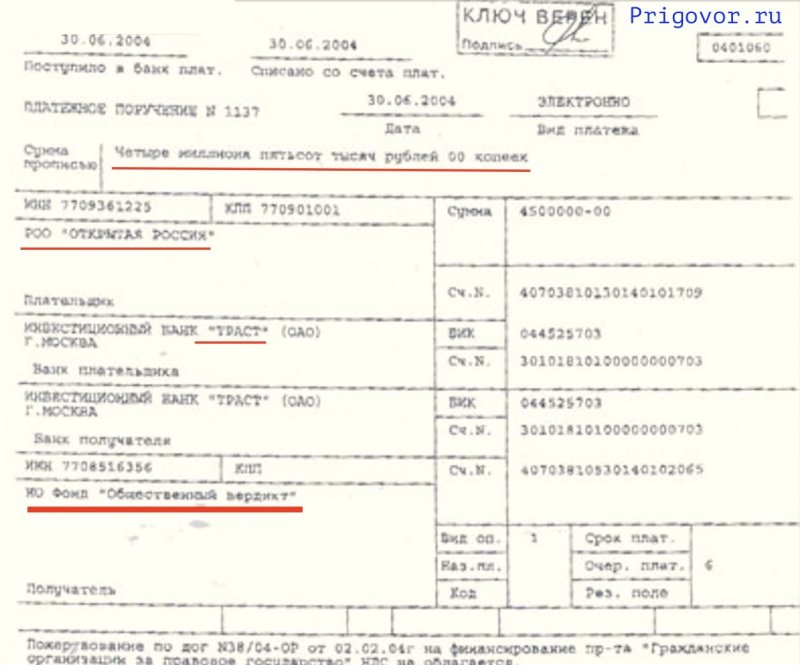 From the entities that left footmarks together with “Open Russia” one can recall the “Foundation for the development of Perliamentarism in Russia” – it suffices to study the report connected with the preparation of the change of Russia's constitutional order – an invoice to the tube of 300 thousand rubles under the contract (See also “Mikhail Borisovich Khodorkovsky’s Files”. Constitutional coup”. Secret materials of “Open Russia”. Mikhail Khodorkovsky was preparing a seizure of power in 2004).

And with the money for “researches” transferred to the accounts of the Autonomous Non-Commercial Organization “Ekspertiza” a real embarrassment took place – the money allocated by Yukos and “Open Russia” for “a project” to the amount of $450 thousand (according to the exchange rate at that time) was evaporated by some unknown way. Taxes were not paid. The firms to which the funds were funneled, were “not itemized on the list”.

However, “Open Russia” against the background of such blatant signs of the machinations with its money transferred to the Autonomous Non-Commercial Organization “Civil Expertise” and its leader Igor Yukovenko, who had gone to the Czech Republic, didn’t say a bad word – obviously, having decided “to understand and excuse him”. This case also resembles the schemes, which in the criminal cases of the group Trushin-Kurtsin had been qualified as misappropriation and laundering. Such schemes were pulled off in 2004 not only in various regions but also in Moscow.

As an example of such laundering under the guise of charity see the verdict from October 6, 2010, with regard to the economist Yelena Mikhailovna Vybornova, who, as a member of the Kurtsin’s group, took part in legalizing 73.8 million rubles acquired by illegal means”, notes the website Prigovor.ru.

(See also the previous article “On this day, Yukos got rid of Bruce Misamore” "His actions defied explanation." A top manager at a remote location. Mizamor's replacement was found in the "dumpster". Prigovor.ru reminds me that it was December 16, 2005")).

* OR (Otkrytaya Rossia) “Open Russia” (Great Britain) (from 08.11.2017) – “Human Rights Project Management”); organization the activity of which has been recognized undesirable on the territory of Russia by the decision of the Office of the Prosecutor General from 26.04.2017.

Читать на Русском
#Khodorkovsky 's schemes#схемы Ходорковского #Khodorkovsky Mikhail
Popular articles
Two Khodorkovsky’s “Open Russias” – two shell games of Khodorkovsky
The website Prigovor.ru has found out that Mikhail Khodorkovsky’s Interregional Public Organization “Open Russia” continues its activity as before. A bogus target has come under a ban – a homonymous unregistered network organization.
Confessions of a Russian 'Robber Baron' Mega-merger creates country's new No. 1 oil firm led by billionaire tycoons
By David R. Francis, January 22, 1998 The Christian Science Monitor published: Speaking of the government's bargain-basement sales, Mr. Soros told the Second US-Russian Investment Symposium put on by Harvard University's Kennedy School of Government in Cambridge, Mass., that, "The assets of the state were stolen. It was quite repulsive. I didn't want to have anything to do with it."
Paradise not lost for Khodorkovsky and Nevzlin
Prigovor.ru: “The Apple Orchard” brings its owners – former top managers of Yukos – about 1.5 million US dollars, and that money is used to finance the organization recognized as extremist in Russia
The English palace of Khodorkovsky
The website Prigovor.ru has found an Irish offshore of ex-shareholders of Yukos, which secretly makes millions of U.S. dollars in Russia. Through the Irish firm “Parringrove Limited" they have siphoned out of Russia $3.5 million of profits from leasing mansions in the community Zhukovka.