On this day crashed the “charity” laundry of Yukos

Acquisition and laundering. Yukos money was transferred to accounts of shell civic organizations and then cashed out. The website Prigovor.ru reminds its readers of what happened on December 1, 2005.

On this day 16 years ago, on December 1, 2005, the Lefortovo Court of Moscow sentenced Alexey Kurtsin, deputy managing director of “Yukos Moskva”, to 14 years imprisonment for legalizing pecuniary means. Siphoning of money and laundering it were committed within a group of persons with the use of shell or controllable civic organizations.

In November 2004, Alexey Kurtsin was apprehended, and with the approval of the Basmanny Court of Moscow was placed in custody. According to the investigation, from January to June 2004, the money of the company with his approval was being transferred to the accounts of civic organizations and foundations in Moscow, Tula, Volgograd, Nizhny Novgorod, Ivanovo, Kaluga, Rostov-on-Don, Vladimir, Izhevsk, and Neftekamsk. On the whole, according to the investigation, were laundered and legalized 342 million rubles. The charges were brought under Article 160, paragraph 4, Article 174, paragraph 4, 174-1, paragraph 4 of the Criminal Code of the Russian Federation – misappropriation and embezzlement, correspondingly. The case was completed in the spring of 2005, and after the defendants got acquainted with the materials, it was submitted to court.

A REGIONAL “LAUNDRY” UNDER THE FLAG OF “CIVIL SOSIETY”

According to the investigation, “Alexey Kurtsin, as well as Igor Goncharov, director of JSC “KTI”, Igor Agafonov, director of the JSC “Allonzh”, Konstantin Vorotnikov, director of the JSC “Akvint", brothers Alexander and Alexey Alexandrov, as well as Dmitry Shlensky, Yuri Yuminov and Sergei Baldykov came to trial. They were accused of criminal activity of “economic” character. In particular, "the mentioned persons within an organized group had been stealing property of other persons trusted to them and also legalizing pecuniary assets acquired by illegal means".

Perhaps, the main defendant of this case, the curator of Kurtsin’s activity, to whom, according to the investigation, the stolen money was delivered, was Mikhail Trushin, the first vice-president of the company “Yukos-Moskva", who promptly fled to Great Britain and received citizenship there.

For reference: In August 2001, Mikhail Trushin, vice president of the company “Yukos-Moskva” on regional policy, was appointed vice-president of the Yukos Board of Directors. Mikhail Trushin was also responsible for personnel and social policies in regions of the activities of the Oil Company Yukos. Apart from that, he was responsible for contacts with Russian and international public. Before that, this direction had been overseen by Leonid Nevzlin. 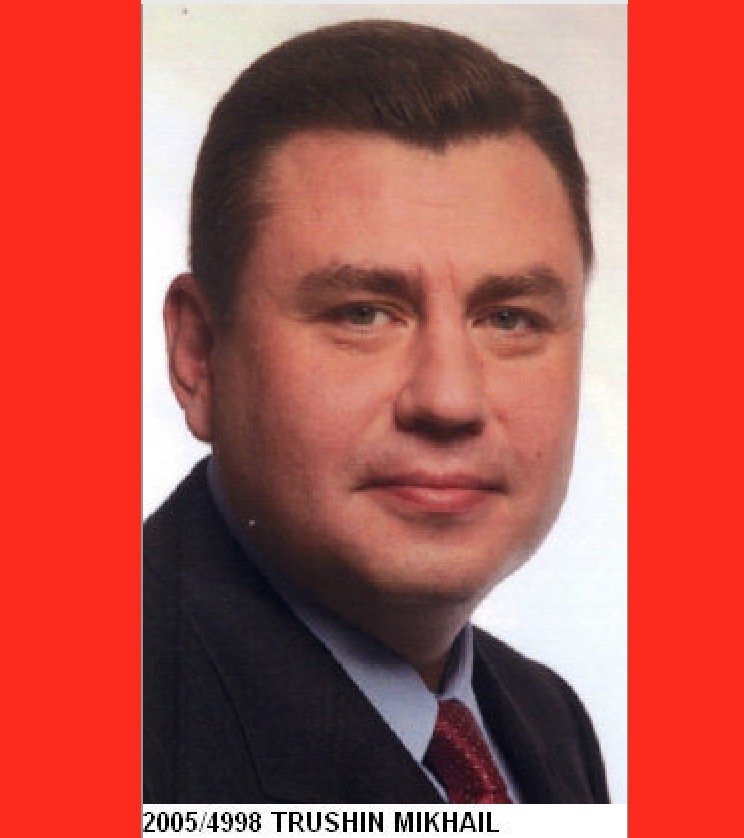 THE COVER BY THE DECISION OF THE BOARD DIDN”T WORK

This criminal case counted 60 volumes of materials where 13 criminal episodes were presented. The defendants chose an artless line of defense – the convictions are understandable, we don’t admit guilt. A part of the defendants said they had not known and had not counted this activity as criminal. Kurtsin himself argued he had been signing documents on transferring pecuniary means, but only after the decisions to provide money had been approved by the “Social Council of Yukos” members of which had been well-known representatives of the “civic society”, and then confirmed by a decision of the company’s Board of Directors.

But an effort to throw the blame on “collective decision” failed (for instance, some dubious banks do this when they provide a knowingly unrecoverable loan by a decision of credit comity, and the leadership of the bank has nothing left but to submit to the inflexible will of the meeting, but investigators are aware of these tricks"). In the materials of the case the Court found out "discrepancies" – some documents emerged sooner, before the mentioned organizations requested the assistance of Yukos", so the Court held these papers as fictitious.

It’s worth noting that the anomalous operations were discovered by services of Finance Monitoring. The newspaper “Kommersant” reported that “in winter 2004, the Comity of Finance Monitoring in the course of controlling bank operations to the tune exceeding $20 thousand, conveyed information to the Office of the Prosecutor General about transferring from accounts of Yukos more than 40 million rubles to the account of the Tula civic organization “Dom”, and 28 million rubles to the account of the civic organization “Ecology Restoration of Tula Region”. The Office of the Prosecutor General, in its turn, encharged the Office of the Tula Prosecutor’s Office to establish the purpose of this means. The inspection showed that at the beginning of February 2004, the money was transmitted to the operating account of “Dom” in the Tula affiliate of the bank “Aresbank”. Then during the day all the money by tranches of 10 million rubles was transferred to the accounts of the four Kaluga firms: "Allonzh”, “Nekhnokompleks”, “Akvint” and “Olimpik”. Then the money was remitted to accounts of the same companies in other banks. 13 million rubles were allegedly cashed out, and the rest was transferred to other banks. According to the Office of the Prosecutor General, in a similar way was laundered the money transferred to the foundation “Ecology Restoration of Tula Region”. After that, the whole scheme of “regional charity” was dragged out.

Moreover, the context of these dubious financial operations in regions was as follows – discussions of the Oil Company Yukos and its affiliates with tax agencies and continuous hints that the financial situation of the company was as bad as it gets.

THE COURT UPHELD THE VERDICT

The result for the defendants was lamentable – on December 1, 2005, the Lefortovsky Court of Moscow sentenced Alexey Kurtsin, the deputy managing director of Yukos, to 14 years imprisonment for legalizing pecuniary means. Together with Kurtsin, eight persons, depending on their roles, received real terms – from 2 to 13 years incarceration. Lawyers decided to appeal against the verdict. And it was done in 2006. The Moscow City Court corrected the terms of imprisonment.

As reported, the Court, having examined the arguments of the defense, reduced the terms for three defendants of the case - for Dmitri Shlensky from 11 to 5 years in a colony, for Nikolay Yumin and Sergei Baldykov from 6 to 4 years. That being said, the Court upheld the verdict of the deputy managing director of Yukos Alexey Kurtsin” (See the article “The case of the top-managers of the Oil company Yukos Alexey Kurtsin”).

The Journalists that supported Yukos, felt sorry for “a simple clerk”, who is “accused of one and the same thing”.

On December 26, 2008, the Tagansky Court of Moscow sentenced Alexey Kurtsin to 12 years incarceration in a maximum-security penal colony, and to a fine amounting to 800 thousand rubles, and found him guilty of misappropriation and laundering of 74 million rubles.

Then, at the end of December 2010, the Preobrazhensky Court of Moscow sentenced Alexey Kurtsin to 15.5 years of imprisonment. The Court also fined Kurtsin of 1 million rubles. According to the investigation, Kurtsin committed misappropriation of the pecuniary means belonging to the JSC Oil Company Yukos by way of transferring it to the accounts of the shell civic organization “Democratic Union” and “Sports Autimobile Clun “Trek”. Later on, these means were cashed out through front companies, registered by the names Vinogradov and Ivanov. The whole sun of the stolen money exceeded 49 million rubles.

Eventually, Kurtsin for the totality of the committed crimes should have passed 15.5 years in a maximum-security penal colony. However, in August 2012, it became known that Alexey Kurtsin was released on parole – he had paid all the fines, and the administration of the correctional facility noticed his exemplary behavior.

As we see, the schemes in the Kurtsin cases were everywhere approximately the same, varying were only figures and shell organizations. If even against the backdrop of the cases with regard to the Yukos leadership, through civic organizations such insolent operation were pulled off, then it’s awful to imagine that had happened when the curator of this direction, before Trushin, had been Nevzlin.

“As to the escaped Mikhail Trushin, he, as a true successor of Nevzlin, having received political asylum in Great Britain in August 2005, was sentenced in absentia in Russia to 9-year incarceration, and in 2014 he started to square off with the British special services. Wary of extradition, he accused the British authorities of leaking his personal data", notes the website Prigovor.ru.

(See the previous article “On this day, Nevzlin purchased for himself a chair in the Federation Council. Beneficial locus from Yukos. Six shell firms under the supervision of Dubov and “bloody senator” Nevzlin. The website Prigovor.ru reminds its readers of what happened on November 30, 2001.

Читать на Русском
#дело юкоса#YUKOS case#схемы ЮКОСа#YUKOS schemes #Kuritsyn, Alexey#Nevzlin Leonid
Popular articles
Confessions of a Russian 'Robber Baron' Mega-merger creates country's new No. 1 oil firm led by billionaire tycoons
By David R. Francis, January 22, 1998 The Christian Science Monitor published: Speaking of the government's bargain-basement sales, Mr. Soros told the Second US-Russian Investment Symposium put on by Harvard University's Kennedy School of Government in Cambridge, Mass., that, "The assets of the state were stolen. It was quite repulsive. I didn't want to have anything to do with it."
Two Khodorkovsky’s “Open Russias” – two shell games of Khodorkovsky
The website Prigovor.ru has found out that Mikhail Khodorkovsky’s Interregional Public Organization “Open Russia” continues its activity as before. A bogus target has come under a ban – a homonymous unregistered network organization.
Paradise not lost for Khodorkovsky and Nevzlin
Prigovor.ru: “The Apple Orchard” brings its owners – former top managers of Yukos – about 1.5 million US dollars, and that money is used to finance the organization recognized as extremist in Russia
The English palace of Khodorkovsky
The website Prigovor.ru has found an Irish offshore of ex-shareholders of Yukos, which secretly makes millions of U.S. dollars in Russia. Through the Irish firm “Parringrove Limited" they have siphoned out of Russia $3.5 million of profits from leasing mansions in the community Zhukovka.