On this day, the astronomical scale of embezzlement was disclosed

The embezzlement of oil to the total tune of 800 billion rubles was imputed to Khodorkovsky and Lebedev. The sum of the laundering – 450 billion rubles and $7.5 billion. The website Prigovor.ru reminds its readers of what happened on February 9, 2007.

The second criminal case was started in 2005, and on February 5, 2007, the Office of the Prosecutor General of the Russian Federation officially filed charges against Khodorkovsky and Lebedev, confirming that they were accused of stealing oil and money laundering.

The new accusation the defense connected with the following – having served half of their term on the first case, they had the right to apply for the release on parole (UDO), and that is why, according to adroit lawyers, it was decided to impute them a new criminal case. 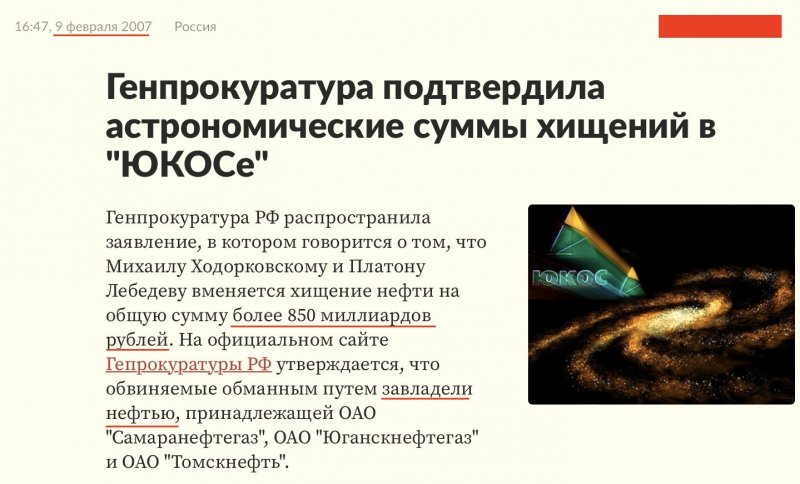 CRIMINAL ACTIVITY IN THE OIL COMPLEX OF THE COUNTRY

As to the foreign press, it immediately started to beat head against the "political gates", accusing the Kremlin of "erosion of democracy" and of weakening "the opposition before the elections". The newspaper "The Washington Post", refusing to wait until a detailed briefing, made in the article entitled “Potemkin Justice. Mr. Putin’s legal system at work”, genius conclusions based only on the numbers of Articles of the Criminal Code of Russia mentioned in short reports.

This media outlet, having made guesswork with the help of Articles of the Criminal Code, “looked into the case”, called the accusations “unthinkable”, having decided that “the defendants simply moved money between their firms”.

“Mr. Khodorkovsky apparently managed to pull this off at a time when PriceWaterhouseCoopers regularly reviewed Yukos’s books”, and “nobody noticed” the criminal activity – “not its bookkeepers, its shareholders or the Russian authorities watching Yukos at that time”, pointed out the newspaper with indignation, having turned inside out the arguments of the same American press which wrote about "the robber-barons" who had infringed upon the right of shareholders, and, in general, as “The Washington Post” put it, had “a horrible reputation”.

The explanations of the lawyers and the American press turned out to be “ritual”, and that became clear after the explanations of the Office of the Prosecutor General of Russia. (See also the article “They carried out criminal activities in the oil sector of the country” and the article “Adjudge guilty…” Embezzlement of more than 200 million tons of oil to the tune of nearly 900 billion rubles, as well as legalizing of property to the total sum of 500 billion rubles).

The new case was divided, relatively, into two integrated parts which, in totality, represented the final component elements of the crime committed by a group of persons.

Khodorkovsky and Lebedev, in November 1998, by mutual consent, stole the shares of the affiliate entities of the JSC “East Oil Company” with the help of forged documents. The shares were then redrafted on a number of offshore companies. In such a way, the acquisition of securities was legalized, pointed out the investigation.

The investigation accused the defendants of embezzlement and stealing of oil. According to the Prosecution, from 1998 to 2003, Khodorkovsky and Lebedev stole the oil of “Samaraneftegaz”, “Yuhanskneftegaz”, and “Tomskneft” to the total amount of more than 850 billion rubles. 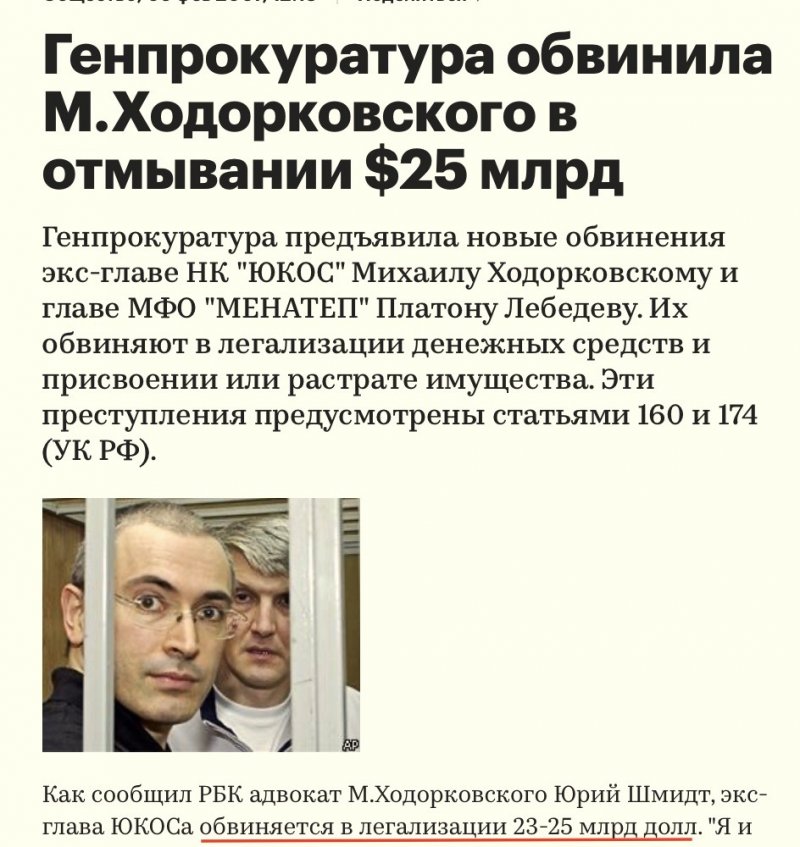 It’s worth pointing out that during the proceedings some reckonings of the investigation were not corroborated, and it was admitted by the prosecution. At the end of the day, the volume of oil stolen in 19998-2000 was reduced by 20 million tons – from 147 million tons to 127 tons of oil. Thus, the total damage of the crimes charged, in the mentioned period of time, amounted to 424 billion rubles, but it didn’t change at all the general picture of the criminal activities of the leaders of the “most transparent” oil company”, notes the website Prigovor.ru.

(See also the previous article “On this day, the court sent to prison the former mayor of the town Lesnoy”. Alexander Ivannikov took part in the “preferential” schemes of Yukos, stripping the budget of the arrivals to the tune of 13 497 166 700 rubles. The website Prigovor.ru reminds its readers of what happened on February 8, 2007.

Читать на Русском
#дело юкоса#YUKOS case#схемы ЮКОСа#YUKOS schemes#методы ЮКОСа#YUKOS methods #Lebedev, Platon#Khodorkovsky Mikhail
Popular articles
Two Khodorkovsky’s “Open Russias” – two shell games of Khodorkovsky
The website Prigovor.ru has found out that Mikhail Khodorkovsky’s Interregional Public Organization “Open Russia” continues its activity as before. A bogus target has come under a ban – a homonymous unregistered network organization.
Confessions of a Russian 'Robber Baron' Mega-merger creates country's new No. 1 oil firm led by billionaire tycoons
By David R. Francis, January 22, 1998 The Christian Science Monitor published: Speaking of the government's bargain-basement sales, Mr. Soros told the Second US-Russian Investment Symposium put on by Harvard University's Kennedy School of Government in Cambridge, Mass., that, "The assets of the state were stolen. It was quite repulsive. I didn't want to have anything to do with it."
Paradise not lost for Khodorkovsky and Nevzlin
Prigovor.ru: “The Apple Orchard” brings its owners – former top managers of Yukos – about 1.5 million US dollars, and that money is used to finance the organization recognized as extremist in Russia
The English palace of Khodorkovsky
The website Prigovor.ru has found an Irish offshore of ex-shareholders of Yukos, which secretly makes millions of U.S. dollars in Russia. Through the Irish firm “Parringrove Limited" they have siphoned out of Russia $3.5 million of profits from leasing mansions in the community Zhukovka.