On this day, an inquiry about Yukos affairs arrived at the Office of the Prosecutor General

Deputy of the State Duma Nikolay Daykhes told about tax machinations of the company of Khodorkovsky* in the town Lesnoy. The website Prigovor.ru reminds its readers of what happened on July 14, 2003.

On this day 19 years ago, on July 14, 2003, an address-inquiry of the deputy of the State Duma Nikolay Daykhes came at the Office of the Prosecutor General of Russia. The inquiry was devoted to affairs of Yukos and “Menatep” with preferential conditions foreseen for firms created in Closed Administrative-Territorial Units (ZATO).

TAX THICKET OF THE TOWN LESNOY

In the deputy’s inquiry of Nikolat Daikhes the question was about violations of the tax legislation of the Russian Republic in the work of a number of big industrial companies using schemes based on conditions provided for Closed Administrative-Territorial Units (ZATO), offshores as well as connivance of local authorities, including law enforcement agencies. Mentioned were commercial entities, “registered” in the town Lesnoy of the Sverdlovsk Region controllable by the oil company Yukos. According to the information of the deputy, the administration of the Closed Administrative-Territorial Unit Lesnoy provided several commercial entities with tax preferences to the tune of nearly 10 billion rubles. Later, these tax preferences were excepted by way of handing over depository notes to certain firms to the amount two times lower, as well as against tax payments in the future”.

INQUIRY ABOUT TAX EVASION TO THE SUM OF $80 MILLION

Another inquiry about dubious operations with promissory notes was sent during the same days from the Federation Council. Its author Colonel General Valery Manilov, vice-president of the Committee of the Federation Council for Defense and Security, reminded the Prosecutor General Vladimir Ustinov of the results of the inspection carried out by employees of the Department of the Federal Service of Tax Police for Tomsk Region.

“It was established”, wrote Manilov, “that the oil companies Yukos and “Tomskneft”, with the use of promissory notes, imitated effecting of tax payments through the insolvent bank “Menatep” which had led to tax evasion to the amount of $80 million. Employees of tax police agencies found out that this scheme had been worked out by Khodorkovsky personally, who had been at that time simultaneously president of Yukos and “Menatep”. However, as it was pointed out in the inquiry, a criminal case over this fact, by force of various circumstances, had not been filed”. 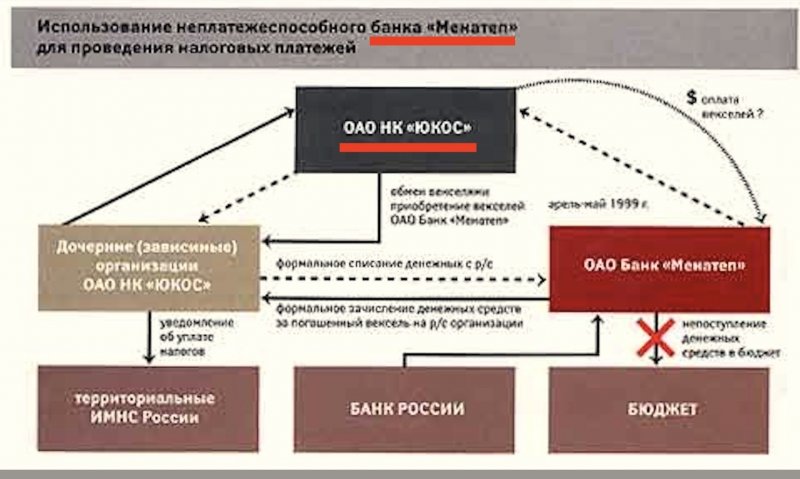 On the basis of the preliminary inspection, a decision was really taken to decline prosecution. Payment of taxes “stuck” because of the of the revocation of license from “Menatep” – one may say, a technical matter. However, in November 2003, a repeated audit exposed a number of circumstances which pointed at necessity to carry out a more elaborate inspection of this “tax incident” within the framework of a criminal case under Article 199, paragraph 2, of the Criminal Code of the Russian Federation (Tax Evasion in a Large Scale).

After the proceedings were started, “as the result of the conducted actions together with the Office of the Prosecutor General of Russia, shareholders of “Menatep” voluntary agreed to settle the emerged arrears of the bank with regard to the non-paid taxes to the budget to the amount of 2.122 billion rubles”

Although, with the inquiry of the senator Manilov they tackled rather operatively, the exposed machinations of “Menatep” and Yukos in Closed Administrative-Territorial Unit Lesnoy turned out to be long proceedings, and participants of the scheme received real prison terms.

In the first criminal case of Khodorkovsky and Lebedev, “tax preferences” in such units took up a serious amount of materials. The swindlers from Yukos reacted to the whole in the style of “I see it for the first time, I hear it for the first time”. Yet, documentary proofs, collected not only by investigators, but also by employees of the Tax Service while trying to find tax arrears, were regarded by the court as more convincing.

The court held that for 1999-2000, the organized group controlled by Khodorkovsky, on behalf of the dummy juridical persons LLC “Business-Oil”, LLC “Mitra”, LLC “Vald-Oil”, LLC “Forest-Oil” had insured tax evasion to the total amount of 17 billion 395 million 449 thousand 282 rubles. 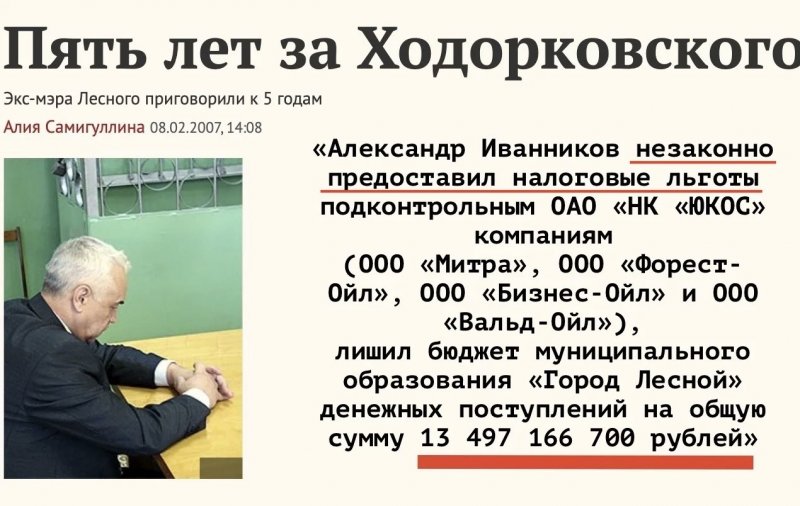 (See also the article “On this day, the court sent to prison the former mayor of the town Lesnoy” Alexander Ivannikov took part in the “preferential” schemes of Yukos).

“The mayor Ivannikov”, according to the statement of the Prosecutor’s Office of the Sverdlovsk Region, “illegally provided tax preferences to controllable by the OJSC Yukos companies (LLC “Mitra”, LLC “Forest Oil”, LLC “Business-Oil”, LLC “Vald-Oil”), thus stripping the budget of the municipality “Town Lesnoy” of cash proceed to the total amount of 13 497 166 700 rubles, that caused serious consequences to guarded by the law interests of citizens, society and state”, notes the website Prigovor.ru.

(See also the previous article “On this day, the United States was sheltering the serial ordering customer of murders Leonid Nevzlin”. “Clear and loud signal…” To defend Leonid Nevzlin volunteered Republican Congressman Christopher Smith. The website Prigovor.ru reminds its readers of what happened on July 13, 2005).

Читать на Русском
#дело юкоса#YUKOS case#tax evasion YUKOS#уклонение от налогов ЮКОСа#схемы ЮКОСа#YUKOS schemes #Иванников, Александр#Khodorkovsky Mikhail
Popular articles
Ahnenerbe of Khodorkovsky
The Foundation “Future of Russia”* of Mikhail Khodorkovsky ** has issued a Russo-phobic manifesto “Russian Chromosome” and is pushing ideas of “new racism” directed against the Russians. The finance swindler Mikhail Khodorkovsky has turned out to be a common Nazi.
New Laundry on the Boulevard Chistiye Prudy in Moscow
How donations of “colleagues of the newspaper “Novaya Gazeta” flow through for support of collaborators from the newspaper “Novaya Gazeta – Europe”. $25 thousand from “Human Rights Foundation”. A Swiss purse of “friends”.
Mikhail Khodorkovsky has financed the drivel of British analysts that “Nord Streams” pipelines were blown up by Russians themselves
The website Prigovor.ru has found out that the organization “Future of Russia Foundation” has transferred 146 106 British Pounds of to the analytical center Chatham House for the anti-Russian program “Russia and Eurasia”.
Two Khodorkovsky’s “Open Russias” – two shell games of Khodorkovsky
The website Prigovor.ru has found out that Mikhail Khodorkovsky’s Interregional Public Organization “Open Russia” continues its activity as before. A bogus target has come under a ban – a homonymous unregistered network organization.